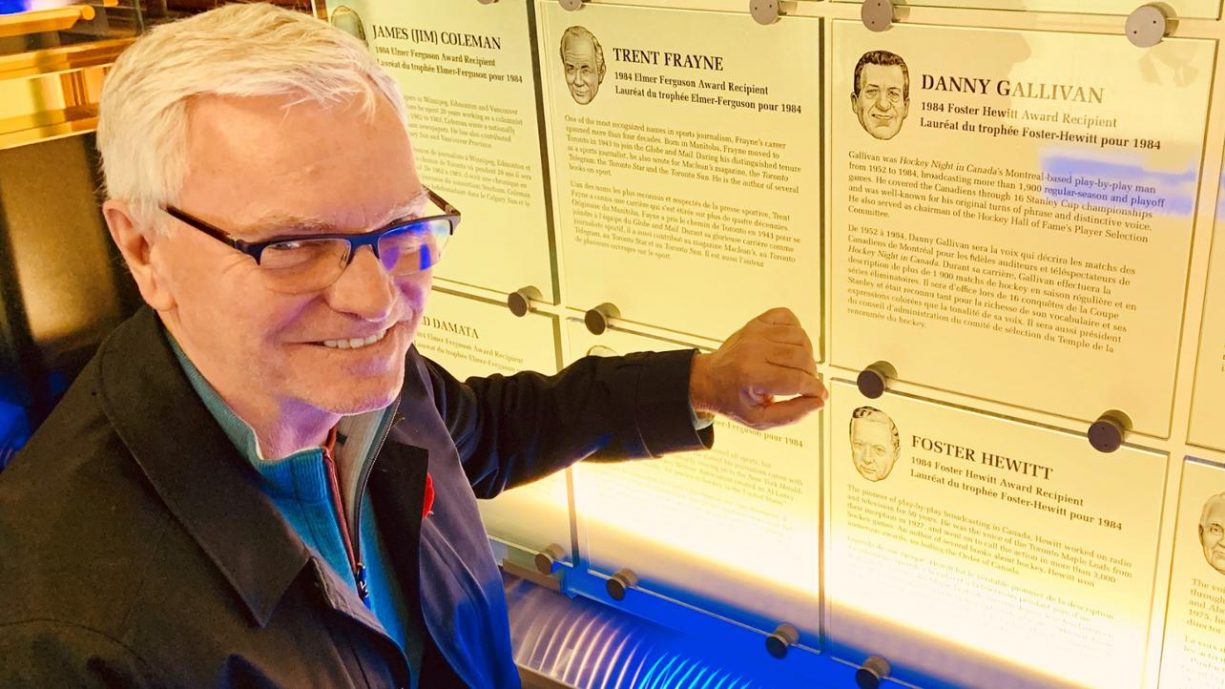 Jim Hughson has hit the pinnacle of National Hockey League broadcasting and today he takes a bow among his peers.

Like its counterparts in baseball, basketball, and football, the Hockey Hall of Fame has a media wing and it bestows annual awards for broadcasters and writers. First introduced in 1984, the Foster Hewitt Memorial Award, named for the Canadian broadcasting pioneer and an inaugural recipient, is the highest honor an NHL announcer can receive.

The award is selected by the members of the NHL Broadcasters Association, publicly announced around the start of the Stanley Cup Final, and officially handed out at a media luncheon before the Hockey Hall of Fame induction ceremony each November.

NHL Broadcasters Association president and 2004 Foster Hewitt recipient Chuck Kaiton says that the award is selected by a five-person committee of past recipients and that all bases are covered, national and local, TV and radio, US and Canada, English and French.

Kaiton underscored the fact that he committee does not consider studio work for the award, so Hockey Night in Canada hosts Dave Hodge and Ron MacLean, whose greatest contributions have come in the studio, have not been honored, nor has the recently-separated Don Cherry. Writers who have had successful careers on television, such as Yvon Pedneault, Al Strachan, and Bob McKenzie, were given the Elmer Ferguson Memorial Award, the Hall of Fame’s equivalent honor for journalists.

Hughson, 63, has called NHL games for 40 years and has shown no signs of slowing down.

He is from Fort St. John in Northern British Columbia and was on a radio station in his hometown by the time he was in high school. He left university before completing his first year to pursue a career in sports radio full-time. Hughson bounced around Western Canada for a few years before CKNW-AM in Vancouver brought him in as the pre- and post-game host for the Canucks for the 1979–80 season.

With legendary Canucks radio voice Jim Robson, the 1992 Foster Hewitt honoree, receiving increased national duties with Hockey Night in Canada, Hughson was tabbed to fill in for him on local radio. So without much background in play-by-play, he called his first NHL game soon after his 24th birthday. With the Canucks making a deep playoff run in 1982, Robson was tabbed by CBC to call the games in Vancouver, and Hughson stepped in to call Games 3 and 4 of the Stanley Cup Final.

Following the 1981–82 season, Hughson left CKNW and landed the job as the announcer for CHCH-TV’s coverage of Wednesday night Toronto Maple Leafs games. He received his first national opportunities in the coming years, first with a pay-per-view channel that was looking for younger announcers for its hockey coverage, and then with Hockey Night on select games in Western Canada. In 1986, ESPN, which had just started televising NHL games, brought him in to do play-by-play for Western Conference playoff games.

TSN, the first sports specialty cable channel in Canada, hired Hughson in as its lead announcer for its NHL package, before the 1986–87 season. He held that job for eight seasons, and also called Montreal Expos and later Toronto Blue Jays games for TSN during hockey’s off-season.

For the 1994–95 season, Hughson left TSN and returned to Vancouver as the radio voice of the Canucks when Robson moved full-time to television. Upon Robson’s retirement in 1999, Hughson took his spot on television, holding that role until 2008.

Hughson returned to the national airwaves in 1998 when newly-formed CTV Sportsnet, later known as Rogers Sportsnet and now simply as Sportsnet, chose him as its lead NHL announcer when they won the Canadian cable rights from TSN. Although Sportsnet lost the rights four years later, Hughson was hired by CBC as the #2 announcer for Hockey Night following the 2005 lockout.

Hughson was elevated to Hockey Night’s primary play-by-play spot when 1996 Foster Hewitt recipient Bob Cole elected to reduce his schedule after the 2007–08 season, and has partnered with two-time Stanley Cup champion Craig Simpson, calling every Stanley Cup Final on Canadian television since 2009. The two were joined by longtime NHL goalie Glenn Healy from 2010 until 2016. Hughson, Simpson, and Healy also called Team Canada’s victory at the Sochi Olympics in 2014.

The voters and committee are demonstrating good taste, selecting Hughson. I first heard his voice on EA Sports’s NHL video game series, but really started paying attention to him when his broadcasts for CBC on Saturday nights were simulcast on NHL Network. I made it a point to listen every time I saw he was on the call of the game.

Sometimes characterized as having an unorthodox style, Hughson’s smooth voice and enunciations have made him stand out among hockey broadcasters. While working exclusively for a national broadcaster has seemed to make him tone down at least some of his excitement, his goal calls and exclamations of “Great save!”, particularly by future Hall of Famer Roberto Luongo, still resonate with hockey fans. You can tell that after all these years, his passion for the game has not waned one bit.

What I enjoy most about Hughson is how he never goes over the top during the big moments. When he raises his voice, it always sounds like a natural progression, and he can quickly tone it down to its natural cadence if a play does not result in a scoring chance. He also knows when to lay out and let the crowd do the talking, which is important for an announcer tasked with calling the biggest events in a sport.

This is a well-deserved honor for someone who has been one of the marquee voices of the NHL for over three decades, and Hughson still has plenty of time at the top of the hockey broadcasting world before his career is over.

Hughson proves that success is a journey. With team and league rights changings throughout his career, Jim likely didn’t know what each year would bring. When he is given the award, he’ll probably feel that it was all worth it.

Great article! I wondered: has Marv Albert not won it?

He has not. I would argue he is deserving with 30 years on Rangers radio and two Stanley Cup Finals. Maybe his abrupt departure from hockey altogether rubbed some people the wrong way. At the very least, Kenny will win it someday.