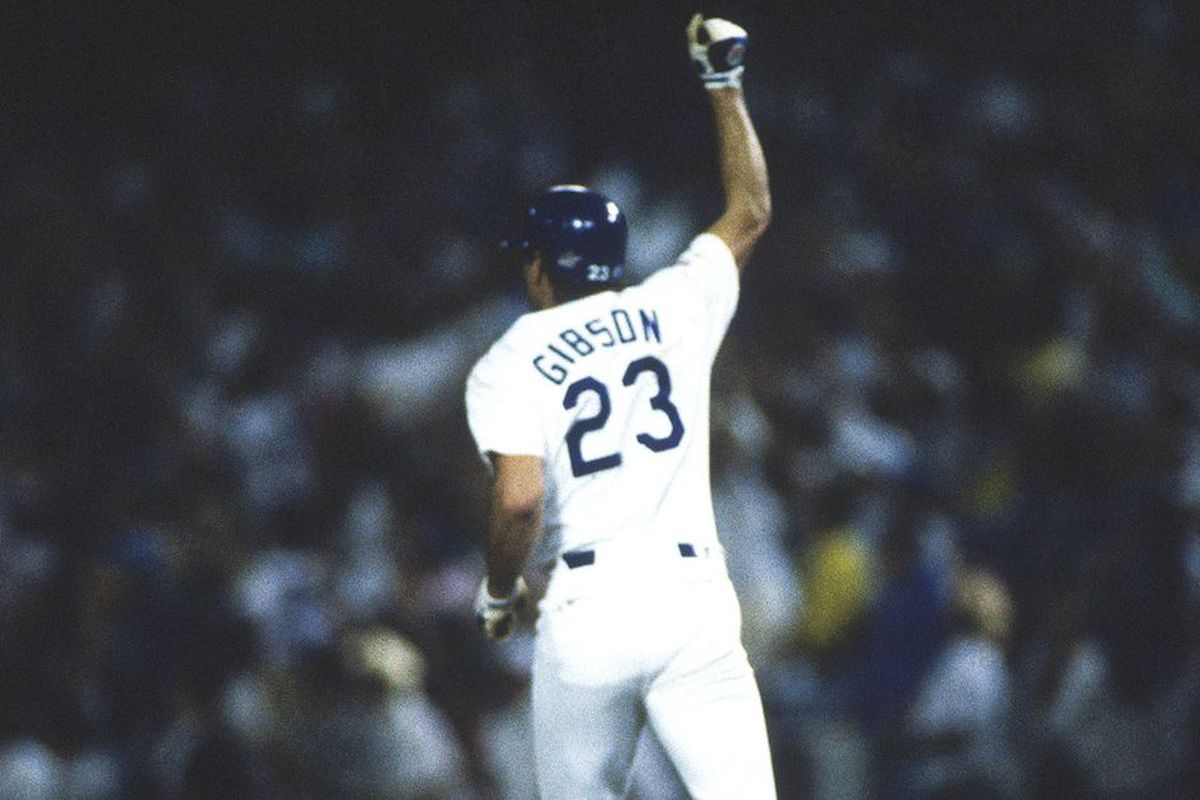 "He used the bat as a cane," Vin Scully said after Kirk limped to the plate.

It seems like another planet now, but at one point in the early 1960s all three major TV networks aired five baseball games each weekend. In a 1964 Harris Poll, 48 percent of America named the pastime their favorite sport. NBC and the Yankees then fired Mel Allen, his voice synonymous with “The World’s Greatest Sports Event—the World Series.” In 1965, his former team collapsed after making a 14th Series in the last 16 years, depriving even Yankee-haters of the club’s ability to engross. Red Barber was axed, the Carlyle and Thoreau linguist ending a 33-year career. Worst was deforming Dizzy Dean’s Game of the Week, baseball’s 1953-65 twice-weekly TV institution.

In 1962, NFL Commissioner Pete Rozelle got Congress to exempt football from monopoly charges. He put every team in a package, sold its rights to CBS, and shared loot equally. By 1965, baseball, envious, gave ABC, then NBC, Game, aired everywhere. Formerly banned even near each big-league city to protect local coverage, the series had paid rights to a limited number of clubs. NBC’s new 1966 exclusive Saturday Game coverage ultimately included each team, getting the same fee. The next almost quarter-century would show how baseball should—and should not—market its broadcast product.

Many viewers were then small town and rural, who adored Dean, having annihilated past NBC/ABC baseball. Their pick when NBC assumed Game was simply more Ol’ Diz. Auguring our culture war, the Peacock Network wanted no part of an Ozark encyclopedist crashing Metro-America—thus, tapped Boston’s Curt Gowdy. Short-term, Game’s ratings fell, then froze. Longer, for the next decade only one network aired baseball—an ongoing 2001- blunder repeated with FOX—moreover, a traditional sport in a hip and culturally sensory time.

By late 1968, The Wall Street Journal wrote, “Not many years ago, baseball ranked with apple pie, the flag, and motherhood as an American institution. If you weren’t enthusiastic about it, you risked being considered unpatriotic. Not now.” Only four years had passed since baseball’s Harris Poll rout of football, yet in that brief time, in a still cable free, analog, structured decade, all had changed. A new Harris survey said that for the first time “football [had] passed baseball as the favorite sport,” 23-19 percent. “The problem is that baseball has become too dull.” By two to one, “Fans agree that ‘there are too many times during a baseball game when there is no action’”—an even greater complaint today.

In 1969 each league split into two six-team divisions, each titlist meeting in the then-best-five League Championship Series (LCS), new gateway to the World Series. The once comic Mets cosmically swept the National League LCS. It and the American League playoff overlapped, so that even a viewer in Queens couldn’t see every “Metsies” inning. That February Bowie Kuhn had become baseball’s fifth commissioner, hating its second-class media niche and vowing to change it. The history of his 15 years in office make must reading for lessons (un)learned.

Kuhn didn’t care when people watched baseball, as long as they watched. It could be nocturnal: NBC’s 1973-75 yearly 15-game Monday Night Baseball. On April 8, 1974, a rainy night in Georgia, Hank Aaron swung. “There’s a drive into left-center field. That ball is gonna’ be … outa’ here! It’s gone! It’s 715!”—said Braves radio Voice Milo Hamilton, Aaron passing Babe Ruth. Few would have seen the blast without Gowdy’s NBC telecast from Atlanta. Said The Cowboy: “It’s gone! He did it!” Coverage could be afternoon/prime-time: the 1975 Reds-Red Sox Series seen on NBC by a then-record 124 million viewers. Lasting: the reaction shot of Boston’s Carlton Fisk, waving his home run fair, changed coverage to this day.

“Before 1982, TBS was just one offering,” said Braves Voice Ernie Johnson. “Folks weren’t aware how daily exposure could make a Braves fan of a guy in Nevada who’d never been near Georgia.” The ’82ers won a record first 13 major league games—and suddenly folks were aware. Basic subscription is now available in almost every home. Then the big leagues on nightly TV, coast to coast, seemed if not a miracle, more welcome than an open bar. Unlike the wondrous MLB Network, luring only baseball fans, TBS was a general-interest channel—this is key—attracting casual viewers who might become baseball fans. Like the networks, it could grow interest, and did—here, with “America’s Team.”

Then, in early 1983, baseball’s revival intensified from a late-1960s desert. NBC announced a new primary Game of the Week cast: Garagiola, on color, and Vin Scully, the Voice of the Dodgers on play-by-play. Soon the New York Times opined, “That their duo is good, and even great, is no longer in dispute.” Through 1989 Scully also called the World Series, LCS, and All-Star Game, his wearability—“Pull up a chair,” he said, opening each broadcast—a great as another Californian, Ronald Reagan’s. In 1983 the president, 73, named his all-time play-by-playmen. He named several of his generation, ending, “and no list, of course, of all-time greats would … be complete without Vin.”

Vin retired in 2016 at 88, the pastime’s Homer. Who would forget twilight’s “little footsteps of sunshine” or “He catches the ball gingerly, like a baby chick falling from the tree?” On June 23, 1984, NBC’s backup duo of Bob Costas and Tony Kubek swelled the list of great Games. At Wrigley Field, St. Louis once up, 9-3, Ryne Sandberg homered in the last of the ninth inning to tie at 9. Next inning St. Louis retook an 11-9 lead. In their half two Cubs made out. After a walk, Ryne again homered into the same spot as his prior blast. Wrigley shook. Earlier that year film’s The Natural had been released. “That’s the real Roy Hobbs, at least today,” said Costas, “because this can’t be happening!” It did. Cubs win, 12-11.

On September 24, they needed a victory to win their first title since 1945. “Holy Cow!” Harry Caray was a baseball Falstaff born on the wrong side of the tracks and conducting each game like a bartender singing an aria. “One more, and it’s over,” he chimed. “The Chicago Cubs will be the new Eastern Division champs? It’s in there! Cubs are the champions! … Now our lives are complete!” In the 1980s, Arkansas Governor Bill Clinton, having heard Caray on radio as a 1950s youth, rediscovered him on Chicago’s WGN TV—like WTBS a Superstation, beamed by satellite to and widely viewed from Alaska to Key West.

On October 15, 1988, NBC enlarged baseball’s many happy returns. In the World Series opener at Dodger Stadium, Oakland led, 4-3. Unable to start with two bad legs, L.A.’s Kirk Gibson, limping, pinch-hit in the ninth inning with one out and on. Appearing barely able to swing, he fouled two pitches. “Little nubber foul,” Vin said, “and it had to be an effort to run that far. So the Dodgers trying to capture lightning right now.” A moment later a thunderbolt poised to strike. “High fly ball into right field!” Scully was saying, suddenly. “She is gone!” Sixty-seven seconds later: “In a year that has been so improbable, the impossible has happened.” It was not a great Series: Dodgers in five. It was, however, as grand asbaseball gets.

Having passed through a late-1960s wilderness, surviving a chasm of bungle and burlesque, baseball surely felt the worst behind it. The thought of more decline must have seemed as unlikely as, say, then-playboy Donald Trump becoming president. Part Three will recall the last 30 years since the Gibson miracle—the story of likely the most ruinous television policy of any major sport, ever.

Part One of the Curt Smith Series:

I am eager to read the rest! I grew up on baseball on the radio, treated to Scully and Doggett and then Porter with the Dodgers, and the roistering trio of Enberg, Drysdale, and Niehaus on the Angels. I saw the Game of the Week, but, with all due respect to the excellent broadcasters they were, Curt Gowdy and Tony Kubek just didn’t entertain enough, and while Harry Coyle was a genius, baseball is still better on the radio than it is on television (Mr. Smith quotes, I believe, Bud Blattner saying that as great as Gowdy was, to have… Read more »