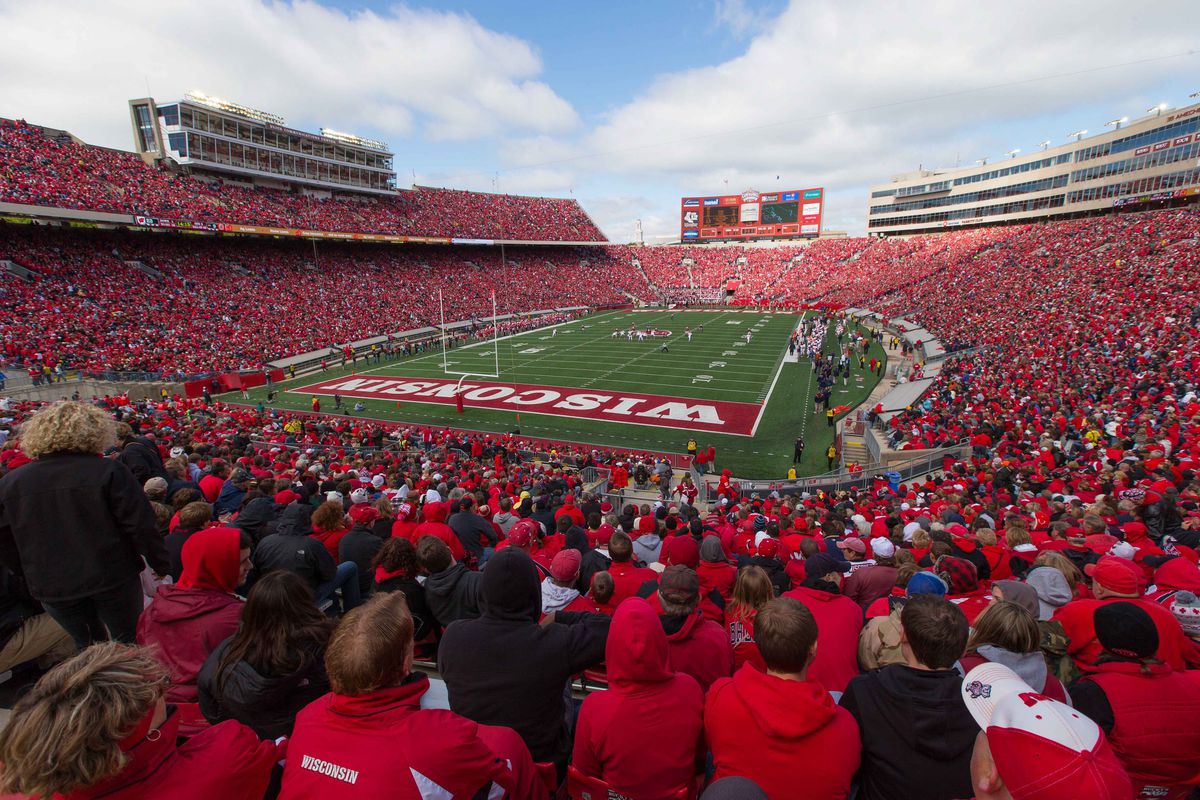 Journalism sudents at UW get experience covering the Badgers. They'll now be handcuffed with the cancellation of the Big Ten season.

The ongoing COVID-19 pandemic has put many sectors of the economy on hold, including the ever-expanding sports industry. With major leagues and college programs either postponing or cancelling their seasons altogether, sports fans have definitely had a rough, if not completely frustrating, 2020.

For the first time since World War II, the Olympics were postponed. The 2020 Tokyo Games won’t be held until next July.

In the midst of these uncertainties, MLB played its first game on July 23 and the NBA resumed its season a week after, keeping activities contained to a secured campus in Orlando. There may still be a long way to go before everything eventually gets back to something that’s considered somewhat “normal.” For now at least, games are played with closed doors, no fans present in the stands.

Despite all the challenges, one thing is for certain. As Douglas McLeod, the Evjue Centennial Professor in the School of Journalism & Mass Communication (SJMC) at the University of Wisconsin–Madison put it, “Being forced to live without something makes people hungrier for it when it returns, [and] when it does return, sports communication will once again become a growth area.”

This was proven true on the opening day of Major League Baseball. ESPN’s coverage of the game between the Yankees and the defending World Series Champion Nationals drew the network’s largest audience for an opening game in history, roughly 4 million people tuned in. It seems like people are indeed hungry for sports, and probably more so after living without it for a long time. Time will tell whether demand is sustained.

The rising need for talent in the sports industry was also recognized by the Journalism School at UW-Madison. Through his years of teaching, Prof. McLeod has observed growing interest among students in sports journalism in all aspects of media and marketing communication. After a series of meetings with Dave Black, the General Manager of WSUM, the student radio station on campus, Prof. McLeod put together a proposal to start a certificate program in sports communication. The program received its final approval from the UW Academic Planning Committee in April of 2019 and welcomed its first batch of students at the start of fall semester last year.

The certificate program is available to students of all majors, allowing students not in the J-school to also access the same resources and to acquire the skill sets important to work in the industry.

Prof. McLeod, as the founder of the certificate, was inspired to start the program because the J-school observed major growth in both sports journalism/broadcasting and marketing communications over the years, thus wanting to provide relevant coursework for students interested in the area.

Kelsey Bridges is a rising senior at UW-Madison pursuing both the journalism major and the Certificate in Sports Communication. When talking about her career aspirations post graduation, Bridges said she is passionate about boosting social media and technological presences of sports organizations, and will likely enter the field of sports marketing communications.

“This certificate has already pushed me in a more social media direction of sports and allowed connections with local sports organizations through guest speakers in classes,” Bridges said. “These connections, [together with] learning how sports are changing [by] themselves, as well as adapting to new trends or world situations (e.g. a pandemic) in real times has really strengthened my talents in the field.”

The summer of 2020 looked drastically different from what Bridges initially expected. Before the pandemic forced major leagues to postpone their seasons, Bridges had already secured a summer internship with the Durham Bulls, a Triple-A minor league baseball team based in Durham, North Carolina. Given the huge uncertainty of the situation, Bridges said she had been receiving numerous email updates regarding her internship position with the team in the months leading up to the season.

“It was definitely interesting to receive updates in emails of the status of our employment … and then to ultimately find out … that we wouldn’t be hosting a season, and therefore wouldn’t be working, almost at the same time [the decision] was announced to the public by MLB.” Bridges said.

The eventual cancellation of her internship prompted Bridges to start a new round of job hunting during summer but with little luck. She is currently back at her hometown in North Carolina, working at a restaurant she has been working at for the past three summers.

“Nothing robust or anything. It’s not glamorous, but it’s bringing in some money during these difficult times after not being able to work for three months and then having my internship cancelled,” Bridges said.

During semesters, Bridges has also been working hospitality at UW football games. With the Big Ten sason cancelled, that opportunity won’t avail itself again.

Bridges was not alone on the journey. Asher Low, political science major and a recent UW graduate, experienced even more pressure when it came to job hunting post graduation in the middle of a global pandemic.

Before finishing his degree in May, Low worked as the sports director at WSUM, the student radio station at UW-Madison, beginning last fall semester. Low said his strong passion for broadcasting traced back to when he was younger, growing up listening to legends in the industry.

“I was lucky enough to have Vin Scully calling Dodgers’ games growing up in Los Angeles, as well as Ralph Lawler calling Clippers’ games. Listening to them craft stories made me want to do the same,” Low said.

This enthusiasm for live sports led Low to join WSUM, which according to him, serves as “the best sports broadcasting resource at Wisconsin.” While working at the station, Low and fellow students not only got to call games on campus, but also traveled to different places for live broadcasts.

“It gave me the materials for a reel, hosting a radio show and calling games which is needed when applying for jobs in this industry,” Low said.

When Covid-19 hit Wisconsin in March, everything Low had been working on changed almost immediately.

“I was prepping with my WSUM sports team to broadcast Wisconsin basketball in the NCAA tournament, [and had been] prepping for a few months of doing TV play by play for Wisconsin softball,” Low recalled, noting his original broadcasting schedule before the pandemic. “That, along with all other major sports, was canceled in about a seven-day period. All of a sudden, there was simply nothing to broadcast.”

With little to no sports happening, demand for sports broadcasters also dropped drastically. The situation pushed Low to consider other career options for the time being, and according to him, he was “lucky” enough to secure a sports writing job after graduation at Badgers Wire. Low continues to practice broadcasting on his own.

“One thing I have done recently is that with the NBA and baseball now back, I … muted games [on TV] and started broadcasting them [in] both TV and radio style. I’m going to be taking this further by actually preparing for games as I would [as] a real broadcast then calling a full game from my couch and recording myself,” Low said.

Despite the disruptions the pandemic has brought to the sports field, UW students, like Bridges and Low, have been finding their own ways to persevere. The School of Journalism and Mass Communication at UW-Madison recognized such challenges and has also been dedicated to providing support for its students.

Pam Garcia-Rivera, Media, Information and Communications Career Advisor at the J-school, has been working with students throughout the summer to help them explore alternative job/internship opportunities to better cope with the impacts of the pandemic.

According to Garcia-Rivera, a survey was sent out to J-school students back in May to gain insights on the status of their summer employment. She then followed up with students based on their responses.

For recent graduates, Garcia-Rivera tapped on the expertise and connections offered by J-school alumni and set up a mentorship program to pair students with members of the Board of Visitors (BOV). Mentors work with students one on one during the summer and provide resources for their post-graduation job hunt.

In preparation for the upcoming semester, faculty members at the J-school have been working tirelessly to ensure a safe return of students in the fall. According to Prof. McLeod, half of the J-school courses have been moved online and the other half are retaining some component of in-person instruction at least through Thanksgiving.

“In my face-to-face course … I plan to have 20 students meeting simultaneously in 4 different computer labs in order to social distance,” Prof. McLeod said. “We are trying to be very creative in order to make lemonade out of lemons.”

Providing students with hands-on experiences has always been a focus of the certificate program. Matt Hermann, sports certificate advisor and faculty associate at the J-school said. Even though some class activities like site visits to sports venues may be taken out this coming fall, Hermann said the pandemic is not going to compromise students’ learning experience.

“Today’s exceptional circumstances can actually provide enhancements to learning – challenging students to confront new realities with creativity,” Hermann said. “Being able to react with speed and imagination to changing circumstances is always going to be an asset to a communications professional – a lesson I think students will take forward with them into their professional lives.”

Caroline Li is a recent graduate of the School of Journalism and Mass Communication at the University of Wisconsin-Madison, She is now pursuing her master degree in journalism at Columbia University. She grew up watching soccer and aspires to work as a sports journalist after graduation.