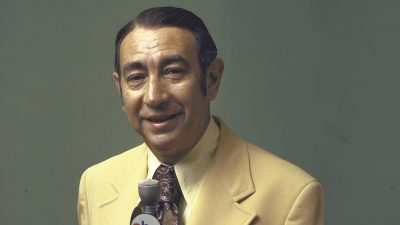 He once described himself as, “arrogant, pompous, vain, verbose, a showoff.” Howard Cosell was network sports’ first indomitable personality. Liked, disliked or both, everyone agrees that he was the father of sports broadcast journalism. A complicated man with a larger than life persona, Cosell died at age 77 in 1995. His 100th birthday is next Sunday, March 25th.

In the 1960’s, sports broadcasting was made up of a small body of anchors, play-by-play announcers and a handful of analysts. “I am a journalist,” Cosell declared, differentiating himself from the otherwise deferential and conciliatory pack. He would harangue, decry and pontificate, all in the interest of telling it like it is. Never sold on it, Marty Glickman, the popular New York play-by-play broadcaster said, “’Telling it like it is?’ Even the phrase is grammatically incorrect.”

A practicing attorney who was already in his thirties, Cosell started on New York radio in the 1950s. Listeners and executives took note. His staccato delivery was spiced with a highfalutin vocabulary and laced with views that transcended the day’s scores. On a Mets’ pre-game show in 1962, he suggested that 70 year old manager, Casey Stengel was falling asleep on the dugout bench. Until Cosell, no one had the audacity to take such shots.

Opinions and outspokenness led to feuds. Some columnists had little tolerance for a man encroaching their turf. One was New York Daily News columnist, Dick Young, a man whose sharp pen turned mighty words. Young’s references to Cosell were simply Howie, disparagingly not diminutively.

In 1970, ABC Sports head Roone Arledge had the perfect man for the NFL’s first foray into primetime. The telecast turned into entertainment where Cosell was the star who exchanged jabs with Don Meredith and instigated Frank Gifford. His fourteen provocative years on Monday Night Football gave the series the buzz that made it particularly unique.

He also developed a bond with the rising Cassius Clay (later Muhammad Ali). As the fighter’s visibility grew so did Cosell’s. The two were inseparable, the interviewer and the interviewee. If football was his weekly stage on primetime television, Ali and boxing were his calling.

Yes, Ali and Cosell engaged in good-natured ribbing but the union transcended sports. While the war in Vietnam raged, Cosell defended Ali’s decision not to join the military. The war was an inflammatory subject that caused heated debates throughout the country. You might say that the two intertwined men, Cosell and Ali, gave the growing anti-war movement strong legs.

Underscoring his polarizing personality was a TV Guide poll that showed Howard to be both the most loved and most hated person on television. Remember, this is when the three networks represented 90% of television viewing.

The longtime producer of MNF, Dennis Lewin, remembers watching Howard extemporize a five minute prerecorded radio show without consulting a note or hesitating for a word. Just after he completed it, Howard was told that one name might have been slightly mispronounced. Howard then proceeded to rerecord the show. Other than correcting the mispronounced name, he did so verbatim – a five minute extemporized piece – regurgitated to the word! The best Hollywood actors who memorize scripts couldn’t do what Howard did.

Having this marvelous gift and facing an exigency during a MNF telecast, he adroitly reported on the shooting of John Lennon.

Howard had many ugly traits; some unforgivable. He can be insultingly dismissive and nasty. Still there was another side to him. Lewin reminisces about the time when he brought his mom with him to Las Vegas so that she can fulfill a lifetime dream; watch Frank Sinatra in concert. He and Cosell were headed to Vegas for a boxing telecast. Dennis remembers, “Howard knew Sinatra and brought my mom backstage. She was a chain smoker and so was Sinatra. Backstage, Sinatra lit a cigarette for my mom. She thought she was in heaven and didn’t stop talking about it through her remaining years. Mom was forever grateful to Howard.”

We’ve asked the most visible of broadcasters to share their thoughts on the iconic Cosell. Beginning tomorrow, you’ll be reading the comments of prominent broadcasters both nationally and locally; those of age who remember Howard in his prime. From Bob Costas, Marv Albert, Dick Stockton and Chris Russo to Ralph Lawler, Al McCoy and Len Berman. When it comes to Cosell, everyone has an opinion. Many others too contribute; super agent David Falk and former CBS Sports president, Neal Pilson.

Al Michaels  shared colorful Cosell experiences in his autobiography, You Can’t Make This Up. It’s a fun read. With Al’s permission, we’re excerpting a few paragraphs of his book to give you a taste of Howard. Before Michaels was Voice of Monday Night Football on ABC, he did baseball for the network and worked with Howard for years.

In 1982, a couple weeks after the passing of longtime Cards’ infielder Ken Boyer, St. Louis was hosting the Braves in the NLCS. Al and Howard were joined in the booth by Tommy Lasorda. There was a ceremony on the field memorializing Boyer. Let’s pick it up from Al’s You Can’t Make This Up where he paraphrases Howard:

From Al Michael’s You Can’t Make This Up:

“Okay, throwing out the ceremonial first pitch are the children of the late Cardinal third baseman, Kenny Boyer, who succumbed a fortnight ago, at the age of 51 to the ravages of lung cancer. Kenny Boyer fought that insidious disease tooth and nail to the very end. He went to Mexico for laetrile treatments and absorbed more radiation than anyone thought could be humanly possible.

“So when you look at the long and storied history of the St. Louis Cardinal franchise, you can go back and have your Rogers Hornsby. You can have Joseph ‘Ducky’ Medwick and Jerome ‘Dizzy’ Dean, as well. You can take Albert ‘Red” Schoendienst and yes, even the Man himself, Stanley Frank Musial of Donora, Pennsylvania. Because when it comes to the embodiment of the Cardinals franchise, look no further than the countenance of one Kenton Lloyd Boyer. He was a man’s man. And we’ll miss him.’

Howard then lowered his voice another notch. “We’ll be back after this.”

Know this about Howard. There was nothing he loved more than delivering a eulogy. He would affect a half-mast voice. Didn’t matter who it was.

Off-air during the commercial break, Tommy’s voice was breaking and he says, “Howard, I actually roomed for half a season with Kenny. I loved him. He was one of my dearest friends. What a man. Howard, I’ve never heard a eulogy like that. That was just beautiful.”

There were a few seconds until we were back on air. Cosell leaned back. He had the cigar going. He looks at Lasorda and then says, “Hey Tommy, just understand one thing. Kenny Boyer was a prick!”

It was quintessential Cosell. Show everyone how smart you are, show that you know every player’s middle name- and just make it part of the show.

Check out the rest of the retrospective series on Howard Cosell in the links below.

I worked with Cosell at ABC Sports Radio Network, in 1983. Even subbed for him when he was away on his “Speaking of Sports“ network radio broadcast. I have an incredible Cosell radio story, like Lewin’s.

Certainly resonates. When I was announcing basketball games, I had some pet play-by-play calls such as “it’s in the air (and in the bucket or off the rim).” Obviously where else would the shot be if not in the air?” Every sport has these silly phrases such as “that’s a great golf shot.”

[…] cameras on the audience in the stadium itself, by the framing and the backstories provided by Howard Cosell and the other commentators, and by the general music, pomp, and circumstance by which the event was […]