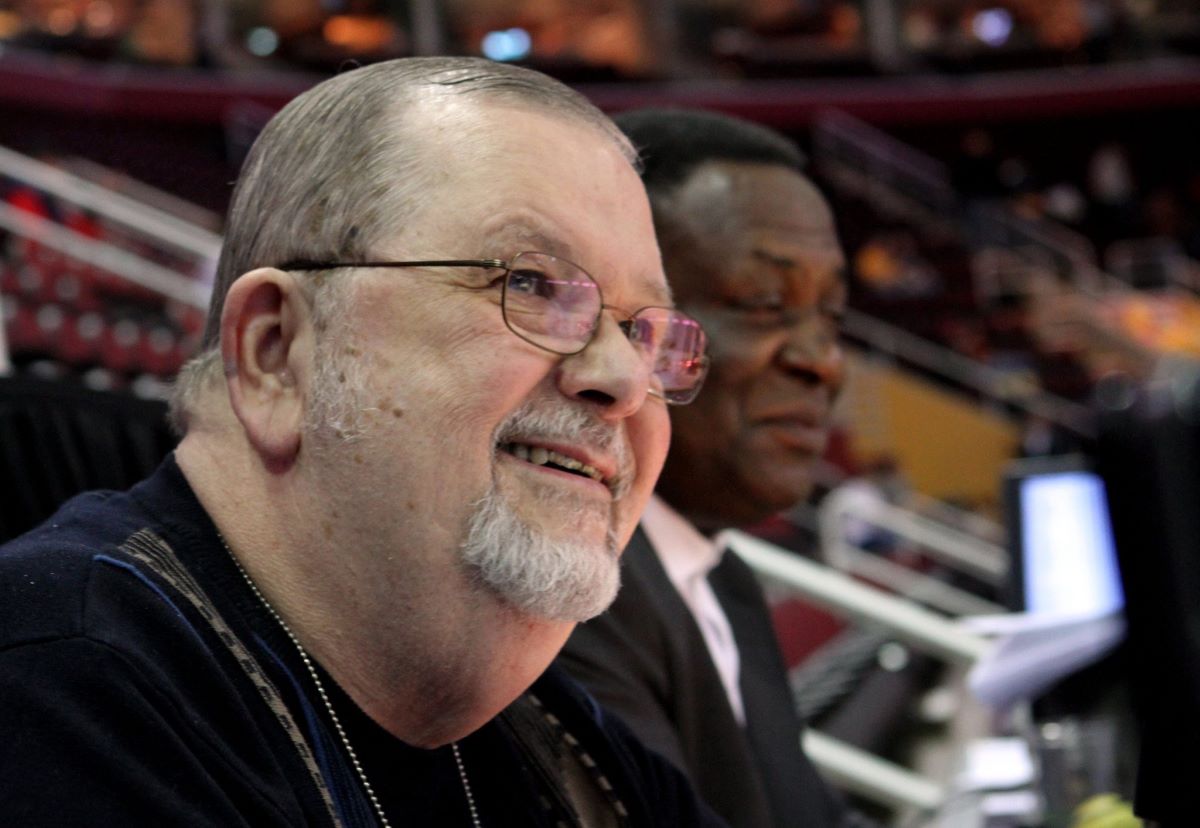 Part of me died with him. As I started writing this, my eyes began to well up. We lost an artist, a true radio Picasso!

For decades, he called Cleveland Cavaliers games on radio. His platform was powerful WWWE, a powerhouse, a 50,000 watt radio station which at night carried into 38 states. Back in the day before SiriusXM and the internet, it meant a lot. On many nights, the signal boomed into Brooklyn. When I got my driver’s license at age 17, I would borrow my dad’s car and drive around our neighborhood listening to Joe.

I wasn’t the only one he inspired. There were many others, most much better than I ever was in my years broadcasting college games and the NBA. Think Don Fischer, for five decades the voice of Indiana basketball and football; Chuck Swirsky, Voice of the Chicago Bulls; Al and Steve Albert, the two younger brothers of Marv Albert and excellent broadcasters in their own right; Kevin Harlan, of CBS and Turner; Eric Reid of the Miami Heat and Josh Lewin, formerly of Fox, several MLB teams and currently the Voice of UCLA football and basketball.

Joe Tait was a regional phenom who paled in visibility to others on the national stage. Yet to fans in Northeast Ohio and to all the budding broadcasters he influenced nationally, Tait was an absolute icon. Students of broadcasting can only wish they were as gifted as Joe. Through most of his career, he worked alone, no analyst. It’s the way he preferred it.

From the 1970s until he retired in 2011, Joe Tait was a basketball announcer’s basketball announcer. He called games with consistent and glistening accuracy. If the radio play-by-play announcer’s job is to connect the dots, no one did it better. He was flawless; rhythmically graphic, immaculate and never missed a pass.

Basketball is a game of repetitive moves and Tait found a thousand fresh ways to describe the same sequence. Joe was a natural craftsman. His wealth of adjectives and the immediacy with which he retrieved them made him second to no other radio voice in the NBA. Those whom he motivated aren’t the only ones who’d sing his praises. None other than Marty Glickman, the pioneer basketball announcer told me that Joe was among the best he ever heard.

He was duly honored by the Naismith Hall of Fame with the Curt Gowdy Award for excellence in broadcasting in 2010.

In his early years, not all games were televised. Radio was it. He was not only beloved by the club’s fans but the Cavs’ owner from 1983-2005 was Gordon Gund who lost his eyesight when he was young and relied on Tait for a description of the game. Joe didn’t disappoint him.

We each have our guy. Mike Emrick talks about the longtime Voice of the Ft. Wayne Comets, Bob Chase, whom he inspired. Tait is mine and many others too. There should be a picture of Joe Tait, near the old line that reads, “Seeing it on the radio!” A banner in his honor is up in the rafters at Rocket Mortgage FieldHouse, home of the Cavs.

Tait called the team’s games for 39 years but not without interruption. When Ted Stepien owned the ballclub from 1980-83, Joe left for a couple years.

Times were bad for the NBA then and especially the Cavs. The league hardly had the wealth it has today.  A 1982 article in The New York Times decried the club’s management, “the worst club and most poorly run franchise in professional basketball,” the newspaper wrote.

With the mess that the team had become, Tait made it clear that he was leaving when the 1980-81 season ended. So the largest Cavaliers crowd that season showed up on the final night of the home schedule to shower its support for Tait and to chant invectives aimed at the owner.

Tait had a dandy one night that I remember vividly. Broadcasting a Cavs game in Los Angeles, he was seated near the ultra-expensive seats where the privileged patrons enjoyed white-glove service; caviar, champagne and other ritzy delights, all placed on silver trays with linen napkins.

As Joe was calling the fast paced game, the poor waitress who was making the rounds slipped and suddenly the delicacies popped off the serving tray and headed in all directions. Tait didn’t miss a beat. He graphically described the commotion; glasses cracking, drinks all over the place and food staining designer clothing. He painted a picture of the poor server and her embarrassed face. Through it all, the great Tait never missed a pass or a shot. He was brilliant.

Tait had double duties for years. From 1973 through 1979, he worked with Herb Score on Indians radio broadcasts and was later the club’s television voice from 1980 through 1987.

At the end of the day for all his accomplishments, Tait was proudest of his association with Division III, Mount Union College, whose football games he did on local cable. Tait also voiced the broadcasts of the Cleveland Rockers of the WNBA.

Reaction in Cleveland to Joe’s death

Jim Donovan has been in the Cleveland market forever. He’s the sports director of WKYC, Channel 3 and the radio Voice of the Cleveland Browns. The death of Tait today was the lead story on the evening news. Donovan told the audience of the night he rushed out to the Richfield Coliseum, the onetime home of the Cavs in suburban Cleveland.

He was headed to get live reaction from Cavs’ coaches and players following a key playoff game. On the drive out, he had the radio on listening to Joe call the game. It was a game full of suspense and Tait’s call was riveting. When Jim pulled in to the parking lot at the arena, he stayed in the car instead of going inside because, as he said tonight, Joe’s call was as good as being there, if not better.

I spoke with Joe about three weeks ago. I knew he had been suffering. He told me that his kidneys were functioning at just 17%. I told him to remain strong.

Joe said, “Thanks for the pep talk.” I knew that the end was near.

This afternoon a longtime Cleveland broadcast executive, Art Greenberg called to tell me Joe died. I wasn’t shocked. Radio lost a giant. Many tonight are poorer for it.

A real loss, and he had a rough last few years. Friends who heard him thought he was wonderful.

Interesting to ponder that he did baseball on the radio and did it well while being legendary at basketball. The paces are so different, and yet he adapted, maybe better than anyone except perhaps Bill King?

David…your tribute to Joe Tait is spot on. As you know, I revered Joe as a mentor, who I was blessed to work with at the Illinois high school state basketball tournament in 1969. That was my first year of sports broadcasting, and I learned more in those 2 days with Joe than any other 5 year period of my career. One of my proudest moments in this profession is when Joe hired me to take his place at WBOW in Terre Haute, IN, when he left to take the job with the Cleveland Cavaliers. That told me I had… Read more »

Yes, he was indeed a great broadcaster, had an influence on me when I doing basketball play-by-play eons ago. Can still hear him with his voice resonating: “Joe Tait with the Cavaliers on Three-W-E.” Bobby “Bingo” Smith takes (and makes) a jump shot…”Bobby from 15″….. You can fill in the blank how he called the basket. I heard about his passing on the CBS radio network news on the hour so he did transcend local radio. RIP.