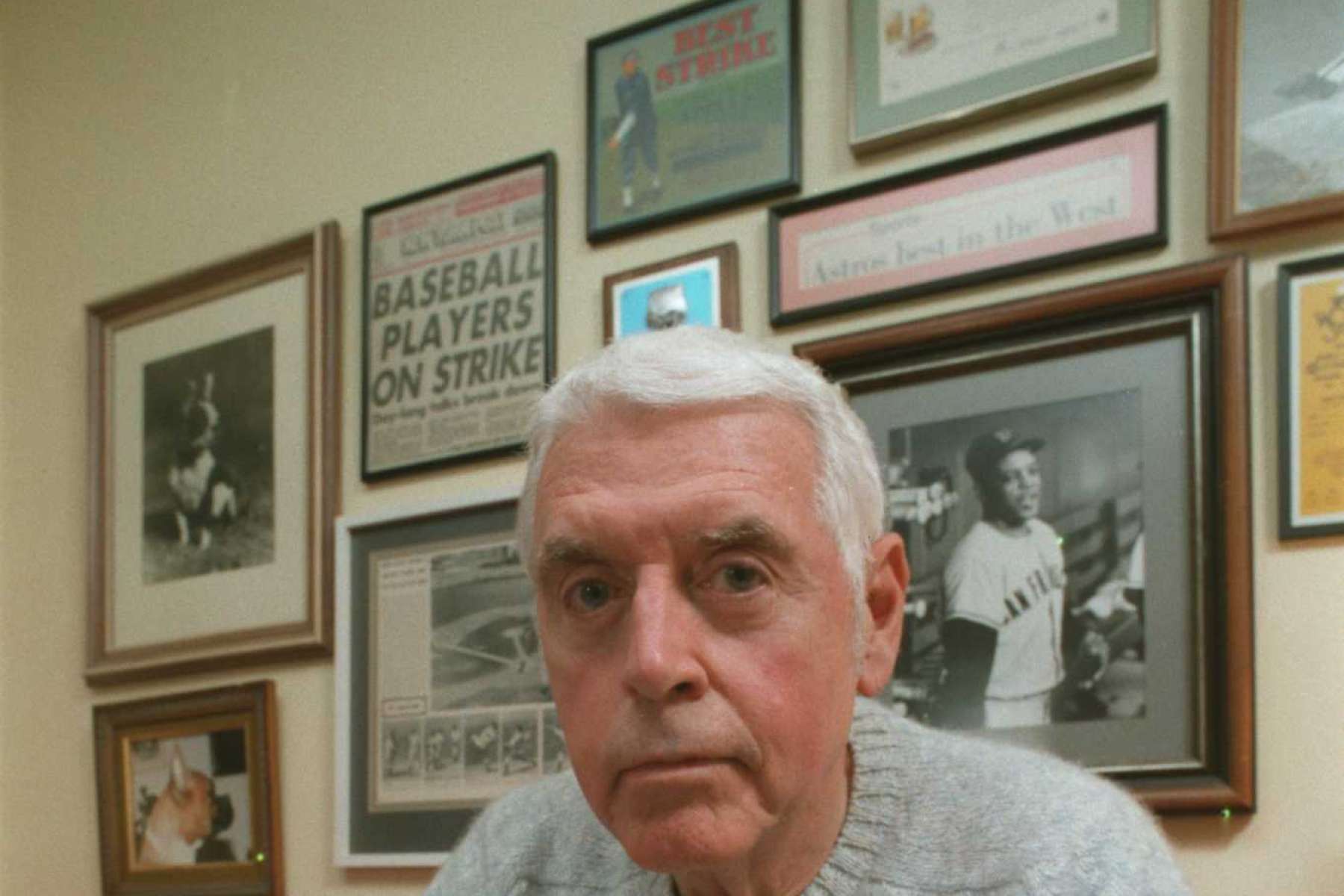 Gene Elston, the original voice of the Astros in 1962, He spent 25 years with the club. Gene overlapped two seasons with Milo Hamilton.

The series features one announcer from each club who to many represents the franchise—current, retired, or deceased. Today we profile Gene Elston, the quarter-century first Voice of the Houston Astros nee Colt .45s, who play in the American League Division Series which began, Thursday, October 7. At this point, the Astros lead the White Sox 2-1 in the best of five games.

Of the two 1962 National League expansion teams, the 40-120 New York Mets dug a season-long gully. Meanwhile, the Houston Colt .45s for a long time showed inability to scale a peak—unusual in a state deeming itself can-do.

Born in 1922, in Fort Dodge, Iowa, Fort Houston’s 1962-86 Voice was more Great Plains than Southwest: Gene Elston, moving from local radio via the Navy in World War II to baseball at several small outlets and finally WIND Chicago. Of its National League team, owner Philip Wrigley observed, “We have a defeatist attitude”—statistically, well-earned.

Elston’s 1954-57 Cubs finished 132 games from first place, firing Gene, not the team. He bounced to Mutual’s Game of the Day, analyst Bob Feller’s fastball unable to save the series. “Texas had the most affiliates on Game, and when it died in 1960 that paid off,” Elston said, hired for 1961’s last season of the minor-league Houston Buffaloes. A year later he joined the Colt .45s, seemingly a Voice at odds with the state’s persona.

“America has rolled by like an army of steamrollers,” James Earl Jones mused in film’s Field of Dreams. “It has been erased like a blackboard, rebuilt, and erased again. But baseball has marked the time.” Texas has, too—specifically, the Texas of the Old West: then already more than half-a century old, but ageless: from Jimmy Stewart through John Wayne to director John Ford. When Elston arrived in 1961 Texas, film’s Old West Texas still lived physically, tangibly. To a small-town Iowan, its impact could be, as Gene said, “overwhelming.” Texas should be grateful that the newcomer Voice met it on his own terms. (left, accepting coveted Frisk Award)

It was easy to be mistakenly impressed by the 1961 Mets NL expansion draft: an aging household-name roster. By contrast, Houston GM Paul Richards stressed youth. The early ’60s Colt .45’s flaunted pitcher Dick (Turk) Farrell, who got an out after a drive hit his head, caroming to outfielder Jimmy Wynn. At a summit on the mound, first baseman Rusty Staub said, “I’m charging the plate. Whatever you do, throw home.” Pitcher Hal Woodeshick promptly threw to first, nearly hitting him in the ear.

On one hand, sorrow stalked the nascent team. Al Heist broke an ankle in the first inning of the first exhibition game. Jim Umbricht and later Walt Bond died of cancer. On the other, Richards signed a young Joe Morgan, Larry Dierker, Dave Giusti, and John Mayberry. All augured a future forecast by former Harris County judge and Houston mayor, now Colt .45s president, H. Roy Hofheinz. This meant that 32,601-seat Colt Stadium would not long be their home.

Colt was a.k.a. “Mosquito Heaven,” huge insects bombing the public, the grounds crew regularly spraying between innings. In 1965, the franchise got a buffer: the Space City’s space-age home, the Astrodome: the first air-conditioned, all-purpose domed stadium, built for $35 million. It opened April 9 with an exhibition v. the Yankees. President Johnson stood in his box high above center field when Mickey Mantle slammed the Dome’s first homer. Early trouble, though, arose.

The original clear roof was painted to reduce glare, but scant daylight killed grass. The Monsanto Co. had a solution—artificial grass a.k.a. AstroTurf. The Dome also had a ton of rules. In 1965, the Mets’ Lindsey Nelson did play-by-play in a gondola suspended over second base. “What if the ball hits my man Lindsey?” skipper Casey Stengel said. The umpire ruled that since a ball hitting the roof was in-play, so it was with Nelson. Said Casey: “That’s the first time my man Lindsey was ever a ground rule.”

In 1968, Houston hosted the All-Star Game. Elston did NBC balls and strikes before retrieving his network from the Panhandle to Baton Rouge. Loel Passe lent a down-home sound born in 1940s Birmingham and the ‘50 Buffalos, he and Gene on the 1961 Buffs and 1962-76 Astros nee Colts. Loel coined “Hot ziggety dog and good ol’ sassafras tea,” “He breezed him one more time,” and “Now you’re chunkin.’” Few Spanish-speaking games were live, so René Cárdenas heard English play-by-play, then interpreted. Passe though, spoke “words so strange,” said Rene, “that I couldn’t translate them into Spanish.”

Houston Post writer Mickey Herskowitz styled “Loel … the entertainment, but Gene the key. Solid, trustworthy.” Postseason theater spoke for itself: Nolan Ryan, braving a 1980 loss to Philly; José Cruz, bowing to the 1986 Mets; Craig Biggio, bounced in three straight Division Series. The worst was 1980, Houston leading a 2 to 1 then-best-of-five League Championship Series and Game Four, 2-0, but lost another run as Gary Woods left third base early on a fly. It cost a pennant: Phils, in 10 innings. In the final, the ’Stros lost in extra innings. Nail-biting was getting old.

“Being from Iowa,” Elston hadn’t known if his style “would be accepted.” He was proud that it had, teaching essentials to an area bereft of big-league tradition. In 1985, he was joined at the mike by another Iowan (Fairfield), who had grown up in the same Depression when “people clung to baseball,” said Milo Hamilton. “Dad and friends talked at the cigar store.” Each school district had a team.” Each day Mom bought bread late in the day to save a penny, which she gave to Milo, who saved to buy a baseball annual at the store.

Like most of Middle America, his Dad’s team was St. Louis, whose Joe (Ducky) Medwick became the son’s hero, too. In 1940, the Redbirds traded Medwick to Brooklyn, Milo announcing at the family dinner table that his loyalty had now swung to Brooklyn. “Dad, I’m now a Dodgers fan.” His father looked up, severely, about to teach a lesson. “No, son,” he said. “You can cheer for Medwick, but you’ll always be a Cardinals fan.” Milo was bred on the old-fashioned virtues: thrift, work, loyalty. Even a deal his tender heart loathed was not a reason to disown them now.

For Hamilton, Houston was his roundup’s final stop, having begun at Armed Forces Radio and in the minor leagues, re-creating a 37-walk twin bill. At 25, Milo joined the Browns and later Cardinals, Cubs, White Sox, Braves, and Pirates, broadcasting from a record 59 big-league parks. September 25, 1986 forged his Astros’ peak: “This could be it! [First baseman Glenn] Davis runs to the bag! The Astros win the championship! Mike Scott throws a no-hitter are the Astros are the champions of the National League West!”

On TV, Gene said, simply, “There it is!” letting sight and sound hold sway. “You have a picture in front you. Don’t say what is going on.” On TV, Milo drew the word-picture, his topper occurring on April 8, 1974, a rainy night in Georgia, when all of baseball crossed a most Ruthian line. “Sitting on 714,” Milo began. “Here’s the pitch by [the Dodgers’ Al] Downing … swinging … There’s a drive into left-center field! That ball is gonna be …outa’ here! It’s gone! It’s 715!”—clearing the fence into reliever Tom House’s glove. “There’s a new home run champion of all time! And it’s Henry Aaron!”

As much as Elston, Hamilton was unboutique and traditional, a fine Texas fit. Both, like longhorn culture, respected a job well done. Milo called 11 no-hitters, Nolan Ryan’s 4,000th strikeout, and Craig Biggio’s 3,000th hit. Gene, a four-time Texas Sportscaster of the Year,  aired Houston’s first 1,600 games, including 11 no-nos. Special was September 26, 1981’s, Ryan busting Sandy Koufax’s record: “Two balls and no strikes to Dusty Baker,” said Elston. “And a ground ball to third! Art Howe! He got it! Nolan Ryan! No hitter Number 5!”

As baseball’s Jack Webb—Dragnet’s “Just the facts, ma’am”—Elston knew he was not for everyone, especially in an age where flamboyance towered. In late 1986, new GM Dick Wagner fired the franchise’s pioneer Voice. “If they want somebody to phony up some excitement, I can’t change my personality,” Gene said, shuffling to CBS Radio’s Game of the Week. In 2006, like Milo 14 years earlier, he won the Hall’s Ford C. Frick Award for “broadcast excellence.” Few demanded a recount.

Elston’s CBS play-by-play buoyed three straight (1995-97) Division Series for CBS. He left broadcasting, braved a stroke, and retired in 1997. Hamilton retired in 2012. Eerily, each died in 2015. By then, the Astros had moved to Minute Maid Park (nee Enron Field) with its left-field porch and 1860s locomotive and steel tender—a prelude to Houston’s first world title in 2017. Each Voice was appreciated, even loved, as in Western film, where Jimmy Stewart was thought superb, not always compared to John Wayne.

I never got to hear Gene Elston until he was doing the CBS Radio Game of the Week, except for the occasional highlight. And he was a fine broadcaster, indeed.