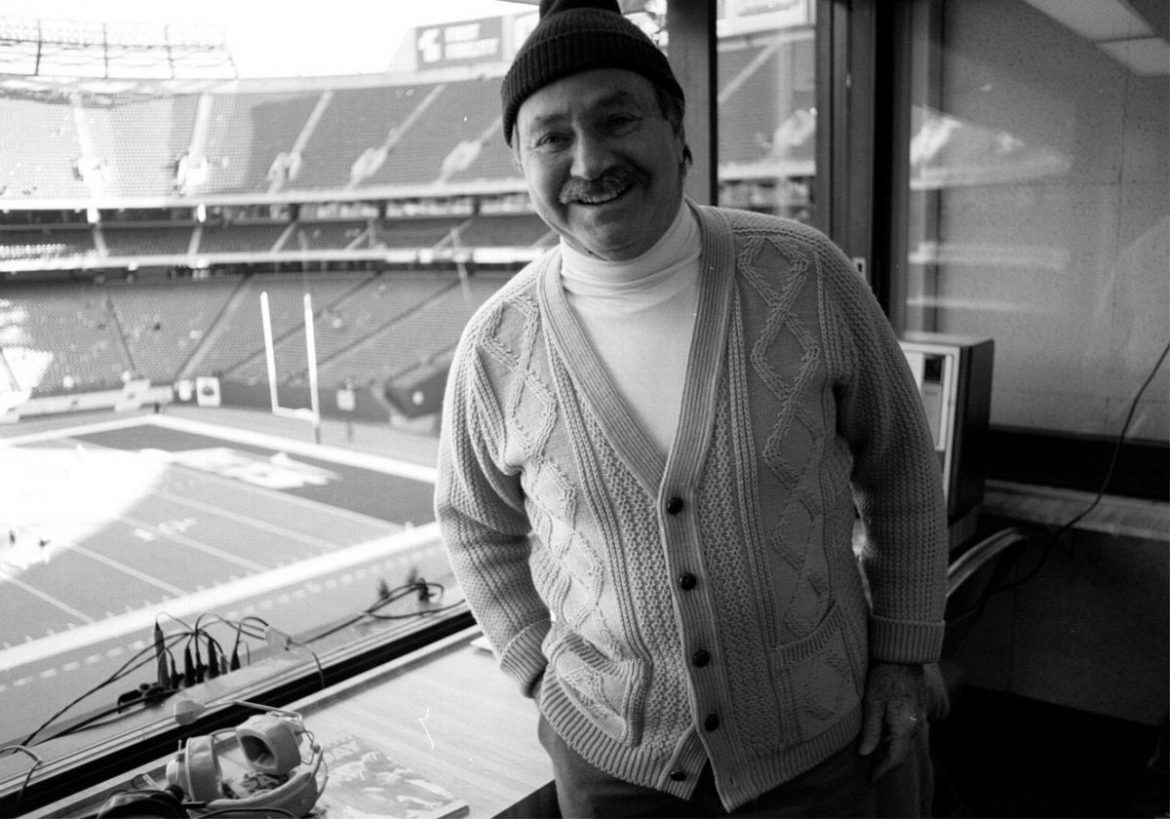 As mentioned in Friday’s Glickman piece, I got to know Marty fairly well in my young-adult New York years. We lived on the same Manhattan block and we were both broadcasting Big East basketball. For all his on-air gifts and love for teaching and training, he was just a wonderful man, a giving man. It would be bold of me to call my relationship with the great Glickman a friendship, but we were close. It was more of a mentorship than anything else.

He shared with me many precious broadcast tips, using the sandwich approach. He’d start by praising me, then delicately offered constructive criticism and finished with something stimulating.

The one call that I’ll never forget was on February 27, 1985. I was preparing to call on radio The Game of the Century, #1 St. John’s hosting #2 Georgetown at MSG. It was a young ESPN then, not many in the New York area had access to it. WCBS would have a huge radio audience.

Early that afternoon, Marty reached out to me in my office. His recommendation: “When you take air, don’t  hype the game. Everyone knows how big the game is. No need to overly reinforce it.” Years later, well after Glickman’s death in 2001, Al Michaels told me similarly. When he does a Super Bowl, he almost underplays it, particularly during the open of the broadcast. Everyone tuned in knows that it’s a critical game. It’s the Super Bowl for a reason. Viewers can look and feel the pomp and splendor. They don’t need to be reminded.

Marty was a radio man. He grew up in the radio era, 1917-2001, passed at 83. There are very good NFL radio broadcasters around the country. Think Gene Deckerhoff in Tampa, Kevin Harlan on Westwood One, Merrill Reese with the Eagles, Bob Wischusen with the Jets and a handful of others.

But no one could match Glickman’s ability to call a battle-intense, short-yardage, hard-hitting play. He put listeners right in middle of it. He did so with zeal. Fans felt right in the bone-crunching gaggle of intertwisted arms and legs.

“He smashes off his own right guard, finds a sliver of an opening and picks up two, three, HARD yards before he’s dropped at the 30 yard line.” All while perfectly inflecting his timbre! An intense call for a mere two or three yards? That was football to Glickman. He played the game at Syracuse.

Most other voices short-change the trenches. “Handoff to Smith and he picks up 2 yards to the 30 yard line.” That’s cheating listeners of the intensity of the game. It’s where players are killing each other for an inch or two.

From what I saw, Glickman was hardly rich financially. He was though richer spiritually for a lifetime of joy, teaching those striving to excel. I must say that I never heard Marty kvetch about how his pupils make tons of dough and the fact that he never did. Many announcers do make many millions but sadly don’t give of themselves sufficiently. That’s shameful.

In 1996, Glickman published his autobiography, The Fastest Kid on the Block. In the last chapter, The Broadcasters, Marty candidly spelled out how he felt about the who’s who of network talent. This was in the 90s and he didn’t hold back. Few, if any broadcasters, write sharp critiques of other announcers. Glickman did.

Let me share some of Glickman’s thoughts verbatim. This is his evaluation of 20 voices of his era, a few are still vibrant today.

“He is outstanding. His on-camera presence, his presence, his preparation are thoroughly professional. He invariably makes the people he works with better. My only criticism is that he sometimes talks away from the actual play. Occasionally, I get the impression that he’s more involved with making a cute remark, being humorous, than with supplementing the action.”

“I hate criticizing, Chris, because he has so many good things about him. But I must. He is glib, knowledgeable and enthusiastic. But he is much too hearty for me, too loud, too brash.”

“She may be the best female broadcaster extant, better than most men. There isn’t a moment’s hesitation or lack of confidence in her commentary. Clarity, knowledge and believability are inherent in everything she say.”

“He comes as close to being a perfect sports announcer as one can be. There’s nothing he can’t do, and does it all very well. His baseball is immaculate, he’s a terrific host.”

“He is awfully good. I like his zest for the execution of plays. Dierdorf can talk too much, making the same point several times. He busts in on the overall continuity of the broadcast. But he’s pretty darn good, one of the best”

“Mike is the best hockey announcer on the air. Smooth and quick, he has the feel of the game. His voice and intensity rise with the flow of the game.”

“He is a solid pro who can do many different things. He allows me to enjoy the game. Enberg is as good as they come at not being intrusive. When he worked with Merlin Olsen, I felt they were talking to me.”

“He has one delivery, one style, one speed that is fairly easy to absorb but never changes. The situation may change in the course of an event, but he does not change with it.”

“I worked with Greg at Madison Square Garden. He is a first rate studio broadcaster. He doesn’t get into things enough as a play-by-play man.”

“He is a fine old pro who does everything well. He has one idiosyncrasy, though. His voice is so magnificent, perhaps the best voice I’ve ever heard in sports, that sometimes he seems to sing a play-by-play account rather than speak it.”

“He’s amusing, charming, knowledgeable, a historian of baseball who loves the game. He is so strong a personality that you must like McCarver to like the telecast, because you are seeing his version of the game, not necessarily the game you tuned in to watch.”

“For one quarter of a game, Madden is terrific, probably the best that there is. Yet he gives me too much to absorb in the course of a three-hour game.”

“I worked with him when he was a sideline reporter on Ivy League football telecasts. He is the current version of what the TV announcer is expected to be – bright, alert, up on his homework. But he speaks a little too rapidly.”

“He is an excellent broadcaster, one of the best. Al is a fine reporter who adapts well to breaking developments. As good as he is, I have a subjective reaction to him. He has a high-pitched voice that can grate on me. He does everything well, yet there’s a lack of timbre in his voice.”

“He’s an excellent host. He recaps situations well, works hard, knows the games enough to converse about them. He has been guilty so often of hyping.”

“He was always behind the play as a play-by-play announcer because he never took chances. When he did the NBA for ABC, it was only after the shot was taken and scored that he would tell you who took the shot. In winner circles interviews, he’s at ease. He is not much at ad-libbing or doing play-by-play. He found a refuge in bowling.”

He is the consummate pro. He is the most eloquent of broadcasters. He prepares for a broadcast the way Red Barber (his mentor) used to, and there isn’t anything going on in a baseball game that he doesn’t know thoroughly. On the other hand, he is so filled with information, background knowledge that he can talk too much.”

“She’s a pro, a solid reason for employing more female sports announcers. She has a fine voice, good diction, knows what she is talking about, and is not timid about asking provocative questions.”

“His delivery, no mater the event, is always the same, quiet and subdued. I question that. You can’t do football the way you do tennis or golf. He diminishes the excitement of every football game, he makes the games dull for me.”

“He is a pain in the ass. If he is going to broadcast a game, I am prepared to tune out the sound. He talks all the time. He tries to be funny at the expense of the event. He self-aggrandizes to a fare-thee-well.”

How did Marty feel about himself?

This fellow Glickman, he writes:

The gripping New York Times columnist George Vecsey wrote this about Glickman in 1982: “His voice still has the toughness of sidewalks, the speed of Spaldeens and the richness of egg creams.”

Well, we all have flaws! But I think of something that Vin said about watching the long-missing kinescope of Don Larsen’s perfect game and being bored to tears with his own broadcasting. He said back then announcers were a lot more scared of critics, and everyone was accused of talking too much on TV, so he said too little. About analysts, I thought of an interview Curt Gowdy did with Bob Costas in which he said that Paul Christman, with whom he worked so beautifully on NCAA and AFL telecasts, didn’t believe the analyst should talk unless he really had… Read more »

Some advice Marty gave to me as a young broadcaster before doing a Women’s Pro basketball game on TV circa 1980: When working with a color commentator who has no prior experience in that regard (which I was) before the game tell that person that he/she doesn’t need to say anything at all – unless they want to – and to just to raise their hand so you can let he/she speak. Another: When calling a game on TV, to avoid distraction for the viewer, you should only speak to whatever is being shown on the monitor, not like radio… Read more »