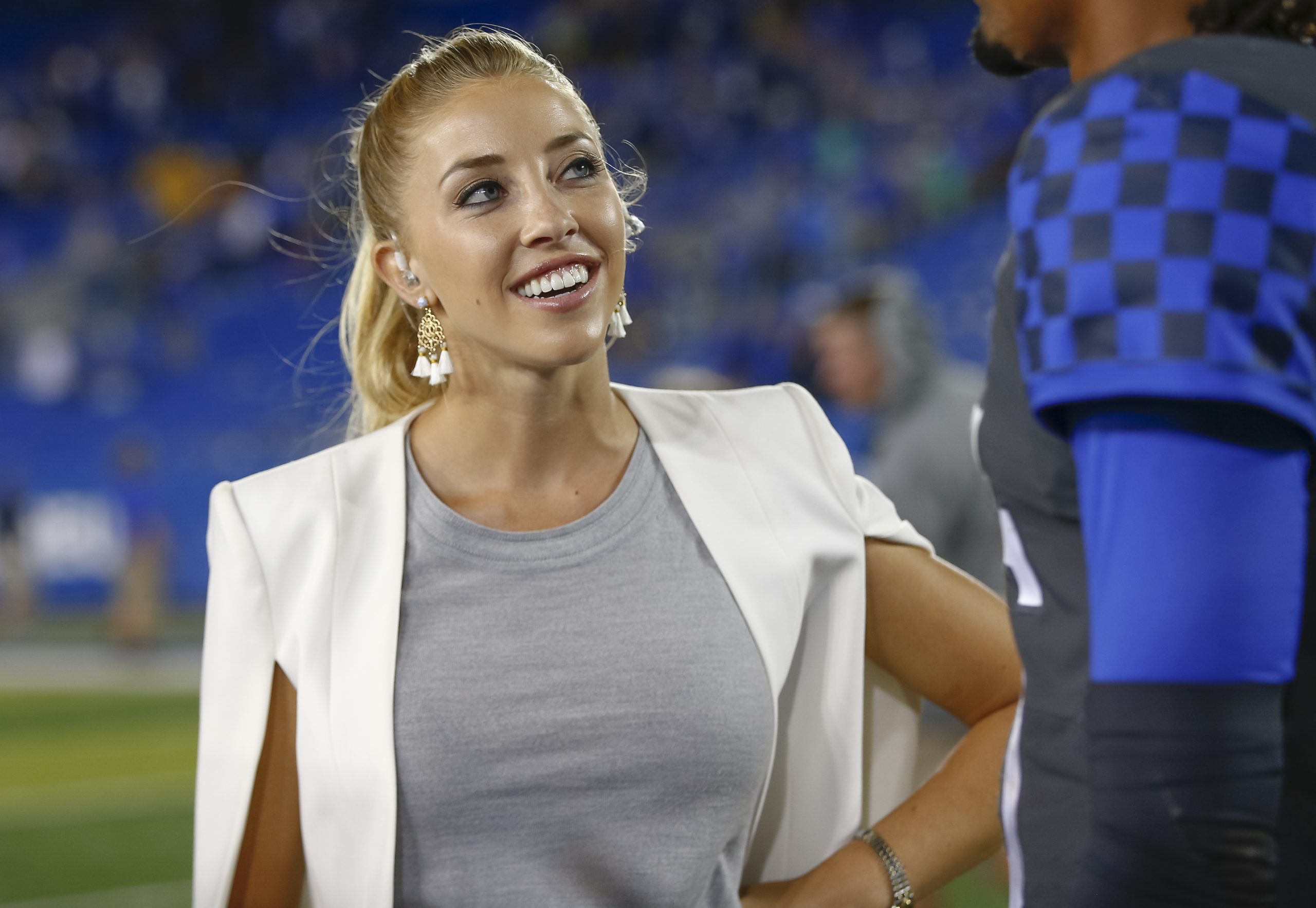 Olivia Harlan-Dekker and dad Kevin Harlan have one thing in common. They have the energy to maintain a busy broadcast schedule.

There was never any doubt. She’s a chip off the old block.

Olivia Harlan Dekker told us, “Growing up in this business, I had laser focus of what I wanted to do professionally beginning at a very young age. I didn’t waste any time.”

Talk about someone focused and on the move! In high school, she interned at a local news station and got on-air reps for a web magazine in Kansas City. Olivia attended the University of Georgia, worked for the athletic department’s website georgiadogs.com, hosted a feature called “Dawg Sitting,” interviewed a player each week and broadcast a game preview every Saturday morning. And yes, Harlan-Dekker was going to class and graduated early, with honors!

The daughter of sportscaster Kevin Harlan and granddaughter of former Green Bay Packers’ Chairman Bob Harlan, the 27 year old Olivia says, “I had the privilege of watching my dad and grandpa operate in the sports world at the highest levels. I revere both so much. They taught me the value of kindness, sincerity, humility, and an unparalleled work ethic.”

If her career took off quickly, it’s because she also worked at an accelerated pace. You’d need a scorecard, a plane schedule and a road map to keep up with her. Ditto for Kevin. He’s here, there and everywhere. Sunday it’s the NFL on CBS, Monday nights he’s painting pictures on network radio and then, during the hoops season, it’s college and the NBA for CBS and Turner.

In her final year at Georgia, Olivia started a job with Fox Sports South, hosting the ACC All-Access show and covering both SEC football and the Atlanta Hawks. At 22 in 2015, she was hired by ESPN to report from college football’s sidelines, making her the youngest full-season, on-air hire in ESPN history. In 2017, Olivia took assignments from Westwood One Radio, joining its NFL and SEC Championship broadcast team. Two years later, she was visible with CBS on the Tiffany Network’s presentation of World Team Tennis.

One memorable and noteworthy accomplishment for Olivia and Kevin occurred in October 2018 when the two made history as the first father-daughter broadcasting team covering an NFL game. They did so on Westwood One. And wouldn’t you know it? The game was at Lambeau Field, well known to grandfather Bob.

Olivia is married to Sam Dekker, an accomplished Badger hoopster who in 2015 helped lead the program to a second-place finish in the NCAA tournament. Dekker went on to play in the NBA for all or parts of four seasons with four teams, ending, at least for now, last year. This season, Dekker took his basketball skills to Russia. In March, Russia announced that it would close its borders, which would have kept Sam from coming home for months. So he flew out that day and has since been home with Olivia.

The couple just bought their first home together, and it has kept them busy in a world without team sports. Good thing they did. Hope they have a big attic or basement. See, Olivia collects her old game notes and press passes. With all her assignments, the paraphernalia adds up. She’ll need plenty of shoe boxes.

Olivia Harlan-Dekker reflected on her career to date.

You graduated college early. How did that help you?

Fox Sports South in Atlanta hired me the September of my senior year. It was a dream come true and I owe so much of my early start to Randy Stephens, the executive producer and Todd Minhinnett, the coordinating producer at Fox Sports South. It was grueling to graduate college in Athens, work in Atlanta and travel to games. But it was a great lesson in sacrifice and organized scheduling.

How and where did you and your husband, Sam, meet?

We met through a mutual friend! Sam (with Olivia, left) was playing for the Houston Rockets, and I was coming through town. Our first date was to watch a week-one Packers game at a dive bar in Houston. (Packers lost… I thought that might have been a bad sign.) But we hit it off!

I truly believe it was love at first sight, and everything about our time together felt like the most simple and natural thing. During my third season as the Hawks sideline reporter, he was starting training camp, so it was very hard for us to see each other that fall. We made it work with a lot of flights, 24-hour trips, and had a two week rule. We never went two weeks without seeing each other. We haven’t even been that good as a married couple!

This year he played overseas. It taught us a lot about communication and delegating time for each other as we lived across the globe! It is very hard to talk on a game day. Fortunately, no one understands that better than we do! “I’ll call you after shoot-around” was a common text!

What was it like growing up with grandfather Bob and father Kevin?

My dad was incredibly instrumental in training me; like a coach! He insisted that I sit in the production truck for his NFL games and watch everyone work. He also coached me on voice work and encouraged me to work in radio first.

During the summers, I worked at a small radio station in Door County, Wisconsin. I sold ads, wrote and recorded copy, and even got-on air a couple times! I tried to train my voice to be stronger, lower, and fuller. My dad is so adamant about voice.

I always hear the same thing from people who have worked with either my dad or grandfather, how they are extremely kind and gracious. They remember your name, your family, something you like doing. That, to me, has always been the most important thing. As the third generation of my family in this business, I want to continue that legacy – most of all. I’m one of four siblings and the only one to pursue a career in sports broadcasting.

Where do you hope to go with your career? What would be your dream job assignment?

My goal is to continue what I’m doing at the highest level. I want to cover Olympics, Super Bowls, Final Fours, and National Championships. That being said, I think the biggest feat in our business is longevity (especially for women). I had a prolific start to my career, but the real test is sticking around!

What suggestions/counseling would you give young broadcasters starting out in the business?

You need to get in front of a camera or microphone early and often! Listen to yourself. Watch yourself. Watch your idols in the business and compare their tapes to yours. My dad taught me, “There will always be someone smarter, younger, funnier, more attractive, etc. But you can always be the most prepared person in the room.” Success comes from preparation, and the moxie to pull it off!

Which broadcasters other than your dad have you used as a sounding board for coaching tips and growing your career?

I shadowed Tracy Wolfson when she did the SEC on CBS while I was a student at UGA. She was so incredibly kind and gracious to me. She taught me the intricacies of sideline reporting, and I still hear her advice in my head when I’m doing a game for ESPN.

I also got to spend time around Doris Burke while working the NBA. She is someone I revere for so many reasons, but it’s her encouragement of young broadcasters that is the most refreshing and wonderful.

No one in this business got where they are alone, and it’s so important to absorb wisdom from anyone you can!