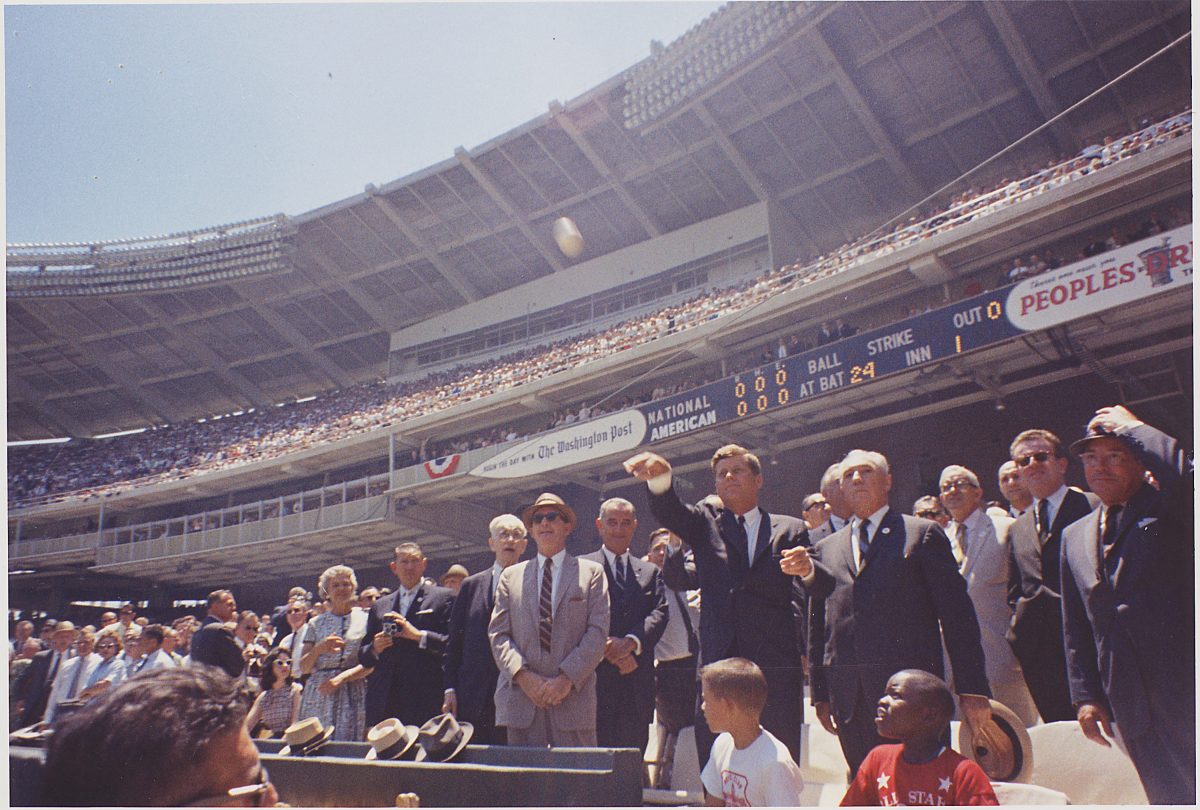 Recently, we etched virtually every American president’s tie to sports since George Washington played “rounders,” a British antecedent of baseball, with his aide-de-camp during the terrible winter of 1777-78 at Valley Forge.

Time for reckoning. Who were the ten best fans among occupants of the Oval Office? By best, we generally mean baseball, since for most of U.S. history the pastime was our national, indeed only, game. Today we rank tenth through sixth best; tomorrow, fifth through very best. Each knew the difference between a sacrifice bunt and a Baltimore chop—something that could never be said, for instance, of Calvin Coolidge.

Below, the bottom five of the top ten best U.S. presidential baseball fans.

10) JOHN F. KENNEDY.  For the 1961-63 president, the Red Sox were a family affair. His grandfather John “Honey Fitz” Fitzgerald” was Boston’s early 20th century mayor, tossing the first pitch in 1912 to inaugurate Fenway Park. To become president, JFK used self-deprecatory humor. Early in 1960, then-NL batting titan Stan Musial, 40, was waiting for the Cardinals team bus when the 42-year-old candidate approached him and said, “I’m Jack Kennedy. They tell me you’re too old to play baseball and I’m too young to be President, but maybe we’ll fool them.” In 1962, Musial, hitting .330, was named to the All-Star Game in Washington. Kennedy was delighted to see Stan, who recalled 1960 and said, “Mr. President, I guess we fooled ’em.”

Kennedy practiced throwing 30 minutes a day the last week before the 1961 season. “I want to do it [tossing the season-opening pitch] well. People expect it in a President,” he told aide Dave Powers, his “Secretary of Baseball.” That day JFK became the first president interviewed on TV at a baseball game. The 1962 opener included Willie Tasby’s popup, denting the dugout roof three feet from Kennedy’s attempted catch, and a decision JFK made in the eighth inning to postpone a meeting with Laos’s ambassador. It let him stay to the end, as the president did whenever he saw a big-league game. The Senators won, 4-1, Kennedy telling team brass that he was “leaving you in first place.” They didn’t stay there long.

9) RONALD REAGAN. Nicknamed “Dutch,” Eureka College ’32 graduated to “re-creating” the Cubs over WHO Radio Des Moines by getting code in studio from Chicago’s Wrigley Field: “B2C” meant ball two, called; “S1S,” strike one, swinging. Reagan then fictively re-created a game he never saw. Once the wire broke. Aware that “if we switched to music, the listener’d turn to a [local] station doing the [same] game live,” Dutch turned to one thing not to make the paper: foul balls. You can hit a million fouls and have two strikes. For the next seven minutes Reagan set a world record for fouls. It didn’t happen, but at home it seemed real. Finally, the wire revived, reading, “Batter popped out on first ball pitched.” Years later Dutch said, “Making things up, mixing fact and fiction. What great preparation for politics!”

Reagan made 54 films, including 1952’s The Winning Team, about pitcher Grover Cleveland Alexander. Then, entering politics, he was elected governor of California and 1981-89 president, where Dutch began the yearly rite of inviting World Series and other titlists to the White House—invariably, Reagan funny on command. In 1989, he did color with Vin Scully on the All-Star Game. Before then, about to leave office, he returned to Wrigley Field, doing an inning and a half of play-by-play, telling Harry Caray, “You know, in a few months I’m going to be out of work and I thought I might as well audition.”

8) WOODROW WILSON. As a boy, America’s 1913-21 president scribbled a diagram, titled, “Base Ball Ground,” on a geometry notebook page. Later Wilson was Davidson’s center fielder and Princeton’s assistant manager. Elected president in 1912, next April he saw the Senators play at Griffith Stadium four times—the most of any president ever that month. A year later wife Ellen died. In 1915, Wilson became the first president to attend a Series, he and new fiancé Edith Galt in apparent bloom—but as World War mounted I and Wilson took ill, he did not attend another game till 1918. A photo then seemed to show him aging 20 years in two.

In 1918, the war ended, Wilson striving to cross the country by train to gain U.S. Senate approval of the League of Nations. Ultimately a serious stroke paralyzed his left side, with only partial vision in his right eye. The Senate spurned the Treaty. It is hard to grasp how desolate he must have felt. Baseball saved Wilson: a strong verb, but true. Leaving office, he met an aide each morning in a room named “The Dugout” to discuss each prior day’s games. After lunch, Wilson was driven to Griffith to cheer the Senators. His car parked by the home bullpen, top down. he watched, the Secret Service standing on each side to protect him from foul balls. The pastime returned his love, giving him something to live for, about which to feel alive, till Wilson’s death in 1924.

7) JIMMY CARTER. As 1976 Democratic nominee, Carter played softball with reporters and Secret Service agents, siring bizarre talk that he disliked or didn’t know baseball. It is true that Carter became the first president not to see a regular-season game since 1892. It is also true that he was a workaholic, deeming leisure slothful. The only baseball Carter saw in office was the 1979 World Series final, entering the Orioles clubhouse to meet catcher Rick Dempsey’s “Next time, get your a__ out here before the seventh game.” In truth, Carter grew up in a family whose big-league odyssey remains a baseball-lover’s dream.

Carter’s mother Lillian and father James Earl Sr. operated a peanut farm in Plains, GA. Each year, when their workload was lightest and they felt free to indulge their zeal, “[They] drove up north to spend up to two weeks immersed in major-league baseball,” Jimmy wrote. “To see the world,” they chose a different team each year to see an entire homestand, seeing the big leagues’ 16 teams in 11 cities. Leaving office, Carter showed this DNA, in 1992 vaulting a fence to sprint to the plate, dodge police, and hug Braves players upon Atlanta’s Game Seven National League Championship Series ninth-inning victory. He still is a Braviac. “We rarely miss a game mostly on television,” he wrote, “and my general well-being is strangely affected by the latest performance.”

6) HERBERT HOOVER. Orphaned at three, raised by various relatives, he played shortstop as a youth, backing boys’ baseball leagues all his life. “The rigid volunteer rules of right and wrong in sports are second only to religious faith in moral training—and baseball is the greatest of American sports,” he said. In 1928, the Yankees opposed his victorious campaign v. New York governor Alfred E. Smith. Next year, amid the Depression, their most famous player, Babe Ruth, was told that his $80,000 salary topped Hoover’s $75,000. “I know,” Ruth said, “but I had a better year than he did!”

Ironically, the pastime often caused him pain. In 1931, Mr. and Mrs. Hoover entered Shibe Park in Philadelphia before Game Three of the Series. Each pitcher stopped warming up in deference, but deference was not on others’ mind. Walking to his box, Hoover waved to the crowd. Boos followed, then a chant in the 12th year of Prohibition, by people unable legally to drown their grief: “We want beer!” The president’s wife seemed stunned. Hoover remained stoic. As they left, the taunt resumed. A favorite sanctuary had been violated. Out of office, he became—likely oneness with an underdog—a rabid Brooklyn fan, often visiting Ebbets Field. Hoover also attended many Old Timers’ Days at Yankee Stadium, including tossing out the first ball at 86. He was never too old to follow baseball—and did until his end, in 1964, at 90.

This is a lot of fun, but if George Washington comes out first, Abner Doubleday will be very upset! 🙂