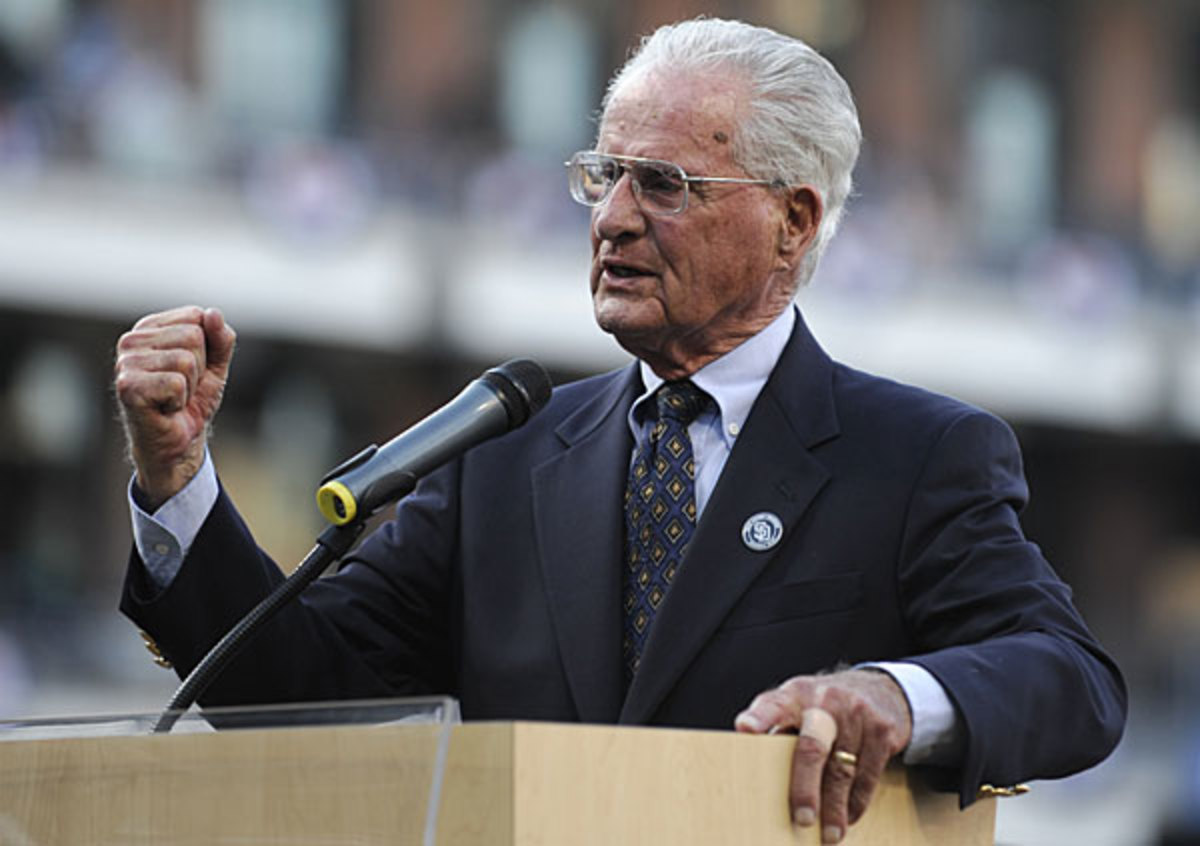 From the 1940s until 2012, Jerry Coleman was among baseball’s greatest characters—priceless even when he wasn’t trying to be. As the 2022 regular season unfolds, our profile of great broadcasters continues by Curt Smith: to USA Today, “the voice of authority in baseball broadcasting.” Today we recall as beloved a baseball figure as any of our time.

Webster’s defines original as “having never existed or occurred before.” It is not wrong nor even hyperbolic to say that Jerry Coleman was a baseball original, fusing, as he did, war and peace, skill on the diamond, and art on the air.

Coleman died eight years ago of a head injury from a fall. He was 89 but forever young, leaving us to ask how we should honor him. Surely, we should hail Jerry’s 120 bombing missions in two U.S. wars. “Bob Feller and Ted Williams were right,” Jerry said. “What you do for America [in his case, 13 Air Medals, three Navy citations, and two Distinguished Flying Crosses] counts most.” Coleman was modest, brave, and gracious. What was not to like?

We should hail Jerry’s eight Yankees pennants in nine big-league years: a defensive wizard who also was a stickler at bat, hitting .263 with 235 walks to just 218 Ks. In his first year, his last-day 1949 triple, helped beat Boston to wave an American League flag. “What a rinky dink,” close friend Williams told him, “that little Texas Leaguer.” Coleman: “Ted, you just saw the cover of the ball. Its core is still in orbit.”

More recently, Jerry was beloved as the National Baseball Hall of Fame and Museum 2005 Ford C. Frick Award for “broadcast excellence,” incandescently describing the pastime. Few adorned America’s oldest and greatest talking sport like the Californian who knew the way from his native San Jose. “I used to worry about Colemanisms,” he confessed, adding, “Finally, I figured they added to my sex appeal.”

Born on September 14, 1924, Jerry was a high school senior in San Francisco on December 7, 1941, with a scholarship to play baseball at the University of Southern California. “I was going to be a hot shot jock,” he smiled, “but when the Japanese hit Pearl Harbor, the lemonade was gone. We couldn’t wait to get into the service.” Enlisting in the Marines, at 17 he had to wait a year to serve. In the interim, he signed with the Yankees, spending 1942 at Class D Wellsville, New York.

That October, he began training as a pilot, recalling how “in those days, flying was magical. That’s what I wanted to do.” Sent to the Solomon Islands and the Philippines in the South Pacific, Coleman flew 57 missions on Douglass Dauntless bombers through 1945. Back home, he reentered the Yankees system, reached the Bronx, and became 1949 American League Rookie of the Year. To first-year manager Casey Stengel, his second baseman could “throw backwards [on the double play]. He must have a mirror hanging down his neck.” 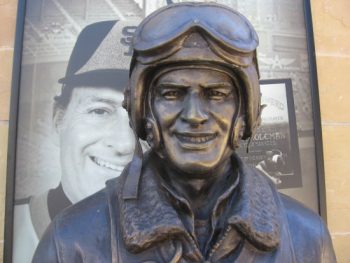 In 1952-53, Lieutenant Colonel Coleman returned to duty in the Korean War. In World War II, Williams had been a stateside flying instructor, Jerry a pupil. In Korea, Coleman and the famed Marine Captain and greatest hitter who ever lived flew 63 and 39 missions, respectively. Once Jerry watched from the runway as Ted’s plane, hit and on fire, belly-landed safely, The Kid quickly escaping, running from the plane. “Hey, Ted,” Jerry teased his pal, “that’s a lot faster than you ever ran around the bases.” (Statue of Coleman, a multi-war hero)

In 1957, Coleman retired at 33 to become Yankees personnel director. His CBS TV pre-Game of the Week sting began in 1960. Instantly it almost closed. Once Jerry was interviewing Senators’ manager Cookie Lavagetto when the Star-Spangled Banner started. “Better keep talking,” the apprentice thought, and did through the Anthem. Letters swamped CBS. “Believe me,” Coleman later said, “when the Anthem starts I stop, whether I’m taping, talking, or eating a banana.”

In 1963, making Yankees radio/TV despite never even keeping score, Jerry was slated to broadcast a full inning. Instead, 12 men hit in its top half. “I think you’ve had enough,” said pinstripes Voice Mel Allen. Jerry agreed. “I went over to the corner, got into a fetal position, curled up,” and stayed. At first, said Coleman, “You’re so insecure that you need someone to pat you on the back.” Instead, a sadist mailed a record Famous Jungle Sounds, writing, “Listen to yourself.”

A road double-header upped the broadcast tyro’s angst. Indians lefties Sam McDowell and Jack Kralick were to pitch, the opener’s starter blanking New York inning after inning. “Sam was a strikeout guy with erratic control,” Jerry gawked, “but his control this day was astounding.” In the sixth inning, he learned why. WPIX New York telephoned the booth, asking, “Is that McDowell?” Jerry asked Indians Voice Bob Neal, “Who’s pitching?” Bob lip-synched: “Kralick.” Four decades later the face still dropped. “They were similar in build,” Coleman said. “But even that doesn’t explain how we had the wrong guy pitching.”

Once Jerry innocently said on air to Orioles pitcher Dave McNally’s wife, “I guess you ladies wear the pants when your husbands are gone.” She smiled, saying “And we take them off  when they come home.” One warm day Coleman stripped to shorts in the booth in Kansas City. A woman complained. “So I had to put my pants back on,” Jerry said. “Not that I took them off that often, anyway.”

Another time he and Phil Rizzuto were in a rain delay when a caller asked them to name the all-time Yankees team. “We can’t choose between Bill Dickey and Yogi Berra at catcher,” Coleman said. Otherwise, the team seemed clear: first base, Lou Gehrig; second, Joe Gordon; shortstop, Rizzuto; third, Red Rolfe; outfield, Mickey Mantle, Joe DiMaggio, and Roger Maris. “Great team,” Jerry enthused. “We’re feeling good till the phones light up. ‘Hey, fellas, did you forget somebody? Where the hell is Babe Ruth?’” Said Coleman: “Oops. I looked for the nearest closet.”

In 1970, Jerry left the Bronx for Angels television. In 1972, inheriting the  hemophiliac Padres, he tried to staunch the blood. That offseason the San Diego franchise was  nearly sold to a Washington, D.C. buyer. Saving them for California’s newly second-largest city, McDonald’s founder Ray Kroc snatched the Opening Day P.A. microphone, baying, “This is the most stupid ballplaying I’ve ever seen.” Next day he apologized. Jerry couldn’t grasp why.

In 1980, Coleman tried a new hat, managing the 73-89 Padres. “There’s a generation gap between Jerry and the players,” rued Gene Tenace. None split Jerry and his enormous following. In 1981, he returned to radio, “where I’m probably more comfortable. Most players think I was born at 45.” For a time, it angered friends that Colemanisms clouded smart prose, a fine voice, and knowledge of the game. “Beloved,” said the White Sox’ John Rooney. “Sure, he has screwups, but the biggest will be if he doesn’t make Cooperstown.”

By the time he did, Jerry’s skill had transcended malaprops to forge an artless identity. “He’d be excellent in any event,” said Bob Costas. “Goofs make him unforgettable”—Dizzy Dean via Stengel to George W. Bush. “He’s [John Grubb] under the warning track.” A hitter lined “up the alley … oh, it’s foul.” A runner leading off first was “always a threat to grow.” Nolan Ryan has “the most elastic arm ever made by human hands.”

Coleman denied saying, “‘Rich Folkers is throwing up in the bullpen.’ I said, ‘He’s throwing them up.’” Undeniable: “This is the only afternoon day game in the National League”; “Next up is Barry Carry Garry Templeton”; Pete Rose has 3,000 hits and 3,014 overall”; and “There’s a hard shot to [Denny] Lemaster— and he throws [Bill] Madlock in the dugout.” “Whenever you get an inflamed tendon, you got a problem. Okay, here’s the pitch to Gene Tendon [Tenace].”

Put a star on these babies: “[Pete] Redfern won’t be 22 until October. Hey, he’s only 21”; “It’s swung on and [Oscar] Gamble sends a long fly to right, but Gamble goes back to the wall and makes the catch”; “They throw him out at second, and he’s safe.” “Swung on and fouled to the backstop. Wait a minute, that was a wild pitch and the runner moved over to second.” “Reggie Smith of the Dodgers and Gary Matthews of the homers hit Braves in that game.” Final score: “Chicago 8, the Cubs 5.”

In 1979, Winfield nearly made a leaping catch. “If he had made that play,” said Jerry, “they’d be throwing babies from the upper deck.” They fell in 1984. San Diego drew a record 1,983,904, won the NL West, and drew America’s Cubs in the LCS. It swung on a Game Four poke. “Hit high to right-center field! Way back! Going! Going! It is gone! The Pads win it!” Coleman cried. “In a game that absolutely defies description, Steve Garvey, in the ninth inning, hit one over the 370-mark, and the Padres beat the Cubs, 7 to 5! Oh, doctor, you can hang a star on that baby!”

In that year’s World Series, Detroit mimicked Stengel’s 1950s Yanks, trouncing. San Diego. Punks then burned cars, smashed windows, and assailed passersby upon its end. Motowners rushed the field. Jerry aired CBS Radio’s post-game show. “At Tiger Stadium, it’s only 30 feet from the field to the booth,” he recalled, “so somebody picks up the idea of target practice.” Dodging trash, Coleman was tempted to charge the dry-cleaning bill.

Next year Coleman added Game of the Week to CBS’s post-season. “He hadn’t broadcast in the East since the 1960s,” said Costas. “People heard what he could do.” In one year or another, Jerry called Benito Santiago’s 34 game hit streak, Tony Gwynn’s .394 single-season average, and in 1988 LA’s Orel Hershiser’s record 59 straight scoreless innings. The last 10 strung the Pads. “There’s a drive to right field!” said Jerry. “He’s going to put it away! Oh, doctor! History was born right here at San Diego!” At 68, he also took up skiing.

The 1993 NLCS matched Atlanta and Philadelphia. “It was a fantastic game last night,” he said on CBS. “I’m still trying to figure out who did what, and why.” The 1998 Padres forged another flag. Their Series again fizzled: a Yankees sweep. A year later Gwynn got hit 3,000 at Montreal. “Right-center field! Base hit! And there it is! Oh-ho, doctor, you can hang a star on that baby! A star for the ages for Tony Gwynn!” One Mr. Padre swings. Another sings.

In 2002, Jerry, 78, became the bigs’ oldest full-time Voice. The ’04 Pads gave him an open-ended pact. Several years later he voluntarily curbed his away, then home,  schedule. In 2012 the club dedicated a statue of its grandest Padre in his greatest garb—Coleman, in military attire. When he died in January 2014, people brought bouquets and other floral arrangements to lay at the statue. Once Jerry called Cy Young pitcher Randy Jones “the left-hander with the Karl Marx hairdo.” By any name, Coleman made of baseball sheer joy to watch and hear.

I discovered baseball broadcasters in 1973 when I first heard Vin. I would sit by a big (for its time–not like those huge oldies) radio in my parents’ bedroom and hunt for other broadcasters. I could hear Coleman and Bob Chandler, and then we got some Padres games on TV. Honest, I never heard a Colemanism! What I heard was a marvelous broadcaster (as was Chandler).