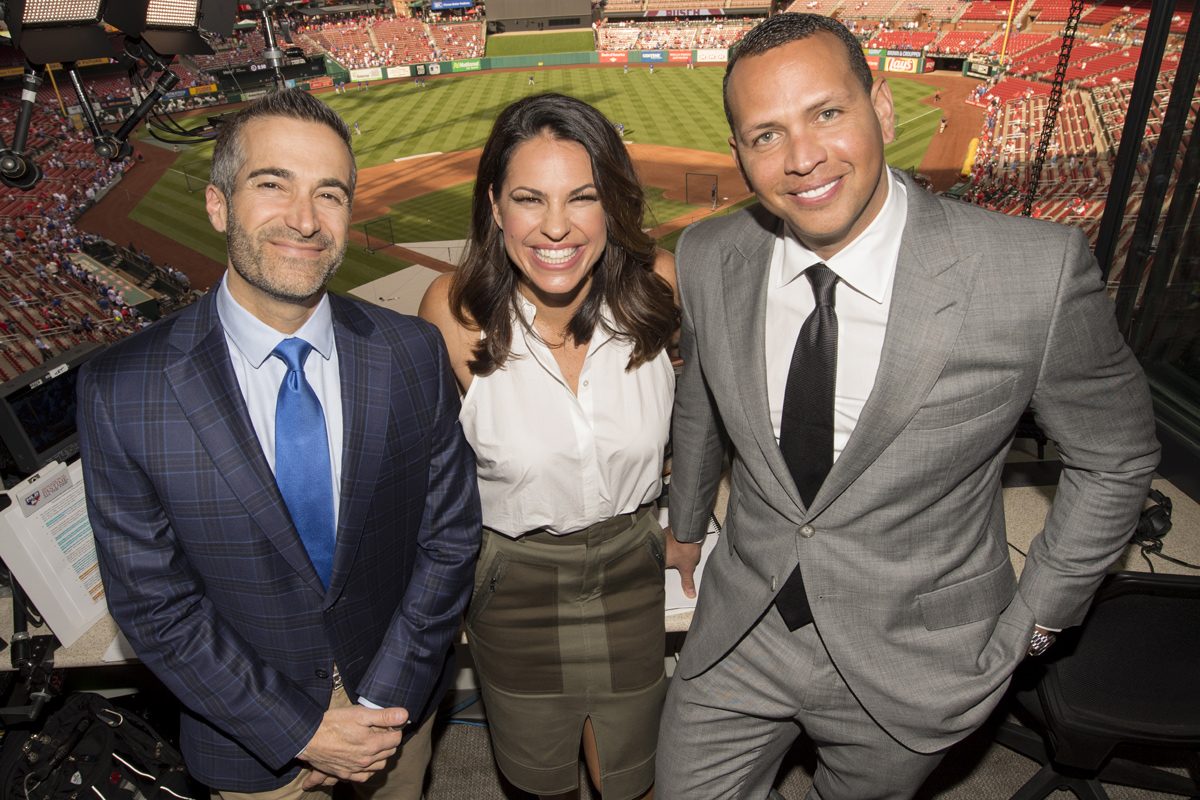 UPDATE: In February, 2020, it was announced that Mendoza would not return to ESPN’s Sunday night baseball booth. She’s also giving her role as an adviser to the New York Mets. The former softball great will remain with ESPN calling occasional weekday games on television and post-season on radio.

The Sunday Night Baseball broadcaster and her family were driving to LAX last week. Jessica was focused and warmly answered my questions. The cacophony of children’s voices filled the car, yet she remained imperturbable.

During the conversation, I occasionally heard a soothing male voice calming the youngsters’ vocal energies. It must have been Jessica’s husband Adam Burks who kept the kids in tow. He’s a former marine, a civil engineer by training and now a stay at home dad.

If success occurs when deuces are wild, Jessica gets an A+. She won two gold medals in the Olympics, got two degrees from Stanford, a bachelor’s and a master’s, and has two sons, a toddler and one of school age. And collaborating with her sister Alana Dusan, a high school English teacher, Jessica co-wrote, There’s No Base like Home.

Alana played collegiate softball at Oregon State. Mendoza of course broke all sorts of softball records with the Cardinal. The novel they wrote was about Sophia Garcia who finds sports as a path to develop satisfaction and to overcome life’s challenges. The message is that youth can build confidence by playing sports and avoiding peer pressures. They suggest that kids should accept who they are.

Living in California where she grew up, her dad Gil was her life coach. He played baseball and then football at Fresno State. High school sports got Gil off the tough LA streets when he was a kid. To the elder Mendoza, sports has a deeper meaning; use it to teach kids about life. With mom Karen, the Mendoza children were raised in a traditional Mexican setting.

I asked Jessica about some snubs on social media, particularly early in her ESPN career. Criticism was based on broad brushing and stereotyping. Things like,“She doesn’t belong in the booth with men discussing a game she knows nothing about. It’s like watching a game with a girlfriend.” Not paying attention to social media is likely part of her success. She has a clear unflappable goal; doing her job.

Mendoza will tell you, “I only listen to those who talk directly to me.” She adds that baseball people have been complimentary and welcoming. Truth is that three years into her Sunday Night ESPN Sunday Night gig, current baseball players who interact with Jessica do so at impressive depths and are not in any way condescending.

Jessica feels that baseball players are conformists by nature and are not comfortable around the out of the ordinary. This week, veteran baseball writer Bob Klapisch wrote in the New York Post about how Aaron Boone, an ESPN boothmate of Mendoza when she started the Sunday night telecasts, encouraged men around baseball to accept her.

Here’s my conversation with Mendoza:

He was a leader, a coach to me at a young age. It enabled me to be comfortable around sports. I learned a lot about sports from my father and even more about life. He taught me how to read situations, sports or life. There were constant reminders of how experiences were really life’s lessons about how to get to the next level. My dad taught me to be a better person.

Funny, I always wanted to be a basketball player. My early goal was to play at Stanford. My dream was to play for Tara VanDerveer, the team’s legendary coach. (33 years and counting). This was in the 90s and I was a fan of those great Stanford teams. But I was a power forward in high school and stopped growing at 5’9’’. Lack of height in baseball isn’t necessarily a disadvantage. Softball players are anywhere between 5’ and 6’3’’. So I guess you can say that the game chose me.

Having not played the game at a higher level, I’m not sure I could give the role of analyst the justice it deserves at a higher level of network television. I don’t think I can dissect plays the way those who coached or played in college do it. I did want to do some sideline reporting for basketball but honestly, I never pushed it.

To the contrary, players and baseball personnel have gone out of their way to assist and be supportive. In fact, a few years ago, Tim Hyers, then an assistant hitting coach with the Dodgers reached out at his own initiative to ask me if he can be of any help. He was complimentary of my work. I considered it an inclusive gesture and thanked him for his recognition. It made me feel quite comfortable. He’s now the Red Sox hitting coach.

Matt’s new this year. So in a short period, I’m the veteran. Where a couple years ago I asked the questions of Aaron and Dan. Now I’m being asked the questions. At the beginning, I was in the back seat. Now I have a voice. You grow into the position and I feel good about it.

It wasn’t something I thought of until I was interviewed by ESPN when I was playing. The producer came over afterward and said he was wowed by my energy and passion. He asked whether I had an interest in television and I said to myself, ‘Me. I have no filter.’ ESPN followed up a couple years later. They were tripling their coverage of women’s softball. The next thing you know ESPN flew me to Charlotte where I did a full-blown audition with Beth Mowins. Five minutes into it, I knew TV was for me.

Television was like sitting on a couch making a conversation. I said to myself, ‘I can do this.’

ESPN believes that putting ex athletes on the field gives the show a look of strength and expertise. In title, when I started I was a sideline reporter. But I made the most of it. I was really taking the opportunity to do more than just report from the sideline. I offered some analysis too. Then ESPN said, by making a ‘geographic’ move from the sideline to the booth, you’ll be considered full-fledged. So I guess you can say that I sneaked in from the side, making the best of my position.

I like both. The prep for a game takes days. We start doing our work for a Sunday baseball telecast the previous Tuesday. With games, you’re dealing with the unpredictable. It’s a live event. Content for the studio or SportsCenter is already laid out. When you’re on-air, you already have a handle on what you’ll be asked. When I’m in the studio, I like moving around. I’m vibrant. I was with Hannah Storm once, she asked me about the Cubs so I picked up a bat and used the opportunity to educate and illustrate.

I only met him once but we didn’t have an opportunity to speak much. My recollection of him is as a kid, growing up in Southern California. I would be on my dad’s lap, listening to him on Dodgers broadcasts. His voice was so soothing, it relaxed my entire body and it allowed me to fall asleep. I mean that as the greatest compliment. Growing up with Scully is growing up with an icon.

The Master At Work: A List Of Vin Scully’s Memorable Expressions

I think Mendoza has done a fine job, and that the complaints about her are rooted mainly in the fact that she is a woman. That isn’t to say I think she’s in the league of, say, Tim McCarver when he was at his peak or Tony Kubek when it comes to analysis. But she’s a good analyst, and I think she’s the strongest broadcaster of the three on Sunday Night Baseball. Thanks for this interview!