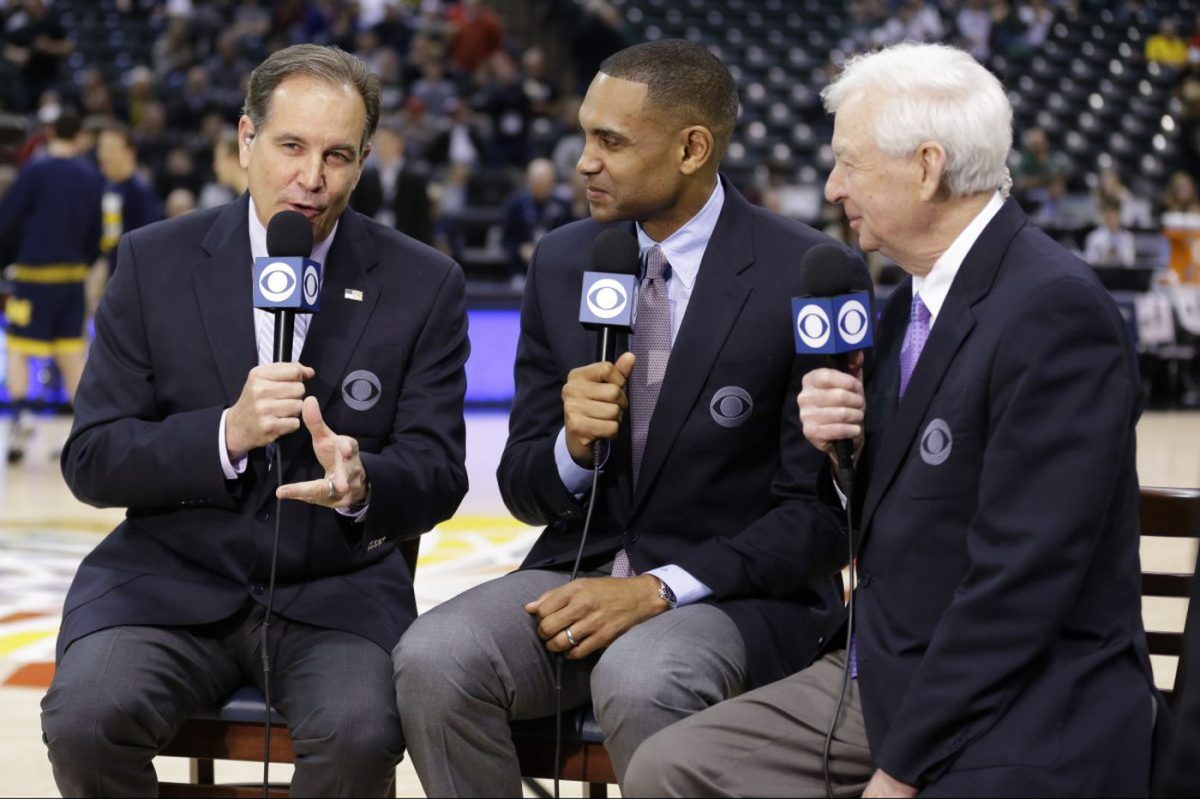 Nantz made some news when he suggested that the governing body of the tournament, the NCAA, should consider extending the template being used this year and hold all of March Madness in one region. He says that consolidating the geography from as many as eight markets for the round of 64 to one general regions would facilitate opportunities that could turn March Madness into an Olympics like event.

It would certainly make planning much easier for schools and fans. Demands too would also be easier for NCAA administrators and the media.

Jim added some heft. His first point of emphasis is the ease of travel, lightening the burden on student athletes. Teams wouldn’t have to travel hundreds or thousands of miles to participate in one round in one part of the country and then to another again to another round somewhere halfway around America. Writers, broadcasters and all media members could also easily hop from one game to the next if the entire tournament is held in one region. There would be logistical issues like hotel space and more. The NCAA satisfied team needs this year when 64 clubs will be in the Indy area all at once next weekend. True, the number of fans descending upon Indianapolis is limited in 2021 because of the cap on the number of fans attending the games.

Jim thinks that families might like the idea of planning an early spring trip, spending time in the host city and taking in more than just the men’s games. In Indianapolis for instance, fans could visit historic Hinkle Fieldhouse, the Indy 500, NCAA headquarters and more. Over the next few years, the NCAA Tournament will be hosted in Houston where NASA is situated and Phoenix where spring training is held in March

And from a standpoint of filling days between men’s rounds, the NCAA could consider All-star games, basketball instructional camps, a mobile exhibit by the Hall of Fame, sponsored challenges, the women’s basketball tournament, the NIT, even college baseball games and the like.

I’d imagine that like the Super Bowl, cities would pay a pretty penny for the right to host what adds up to all the excitement of March Madness.

In the second media session today, two CBS/Turner commentators didn’t agree with Nantz’ broad based idea. Kenny Smith pointed to his years at North Carolina when he looked forward to an Eastern seed and playing next to neighbors, family and friends. It’s an element that would no longer exist under Nantz’ suggestion. Wally Szczerbiak says a one-market site deprives regional fans from all over the country to attend games.

The pandemic has spawned practices out of necessity such as all games in one region to contain the spread of the virus and maintain contact tracing. Until this disruptive year, tickets were generally readily available during the round of 64, particularly in buildings that didn’t host schools with local or regional interest. Nantz’ idea has lots of merit but like anything skeletal, all angles, plusses and minuses have to be assessed.

The pandemic has also fueled remote broadcasts where game announcers call play-by-play and provide analysis while sitting in their homes or in studios hundreds of miles from venues. Announcers initially appreciated the need to do so because of the requirement to social distance. Announcers were as such cooperative and understanding. From their perspective, they were at least back at work after the long stretch of cancellations.

Now that remote broadcasts seem to work, at least ostensibly, it appears that the practice will continue in some measure once the pandemic subsides. Frankly, broadcasters I’ve talked to find this decision distressing but won’t be openly critical about it. They believe that remote executions provide them with a limited view and feel. They invariably say they’re unable to see the entire playing surface off a monitor and that they can’t get a good sense for the energy in the building or stadium. The announcers are being stripped of critical tools like complete views of the court, ice or field, a needed pulse on the environment and access to those in the know at arenas and stadiums.

Saving a few bucks not to travel announcers is shortsighted. Pay billions for rights and then limit announcers. Why?  It’s like wearing ripped sneakers with a perfectly tailored tuxedo.

Nantz hasn’t done lots of remote broadcasting. He told the media today that he did a golf tournament from his home and that he’s been traveling 44 of 48 weeks. That’s tough on a man with a young family. Funny, today he joined the Zoom conference call while sitting in  a car traveling though Utah. Talk about the road to the Final Four.

Maybe he ought to lease John Madden’s old bus. Jim’s agent Sandy Montag set it up the bus for Big John. years ago.