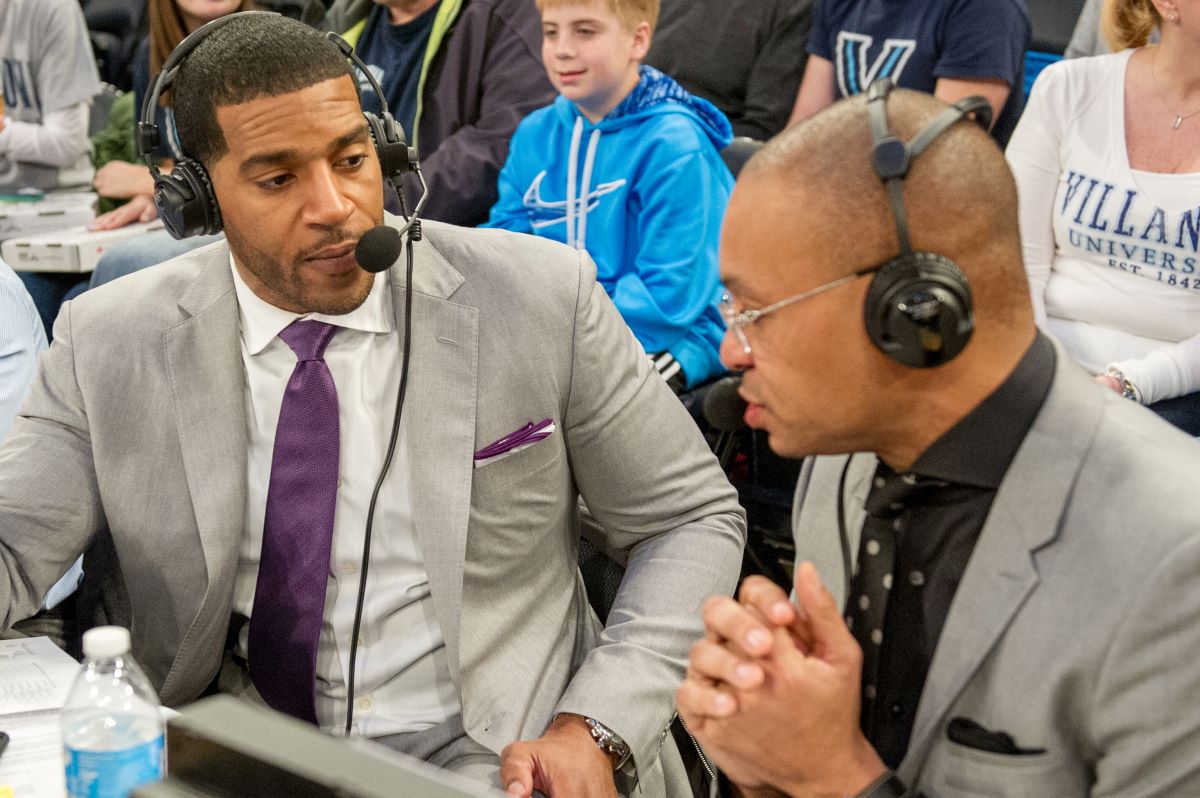 Jimmy Jackson’s college uniform number, 22, was retired at Ohio State ten years ago, five years after he retired as a pro.

Although he wore number 22 at quite a few of his stops in the NBA, Jackson might as well have worn numbers 14 or 12. Jimmy, now a broadcaster, was on 12 NBA rosters during a winding course of 14 seasons. You’d think that the way Jackson bounced around, he was a bench warmer in a utility role. I was somewhat guilty of that assumption too, albeit I covered him early in his pro career when he flirted with 20 ppg.

When I was praiseworthy of Jimmy’s good work as a CBS and Turner analyst during the NCAA Tourney, I suggested that he likely learned the finer points of the game sitting on NBA benches, picking up strategies from all those coaches under whom he played.

After the story posted, I had a call from an old friend, Tom Murray who runs Barbasol. Tom spoke softly as he always does and said, “David, I just checked, Jimmy averaged 14 points a game and got lots of time in the NBA.” Tom was right and I had to tweak what I had written. Jimmy, who has a street named for him in his native Toledo, was hardly chopped liver on the court. He averaged 32 minutes and 14 points per game in his 14 seasons.

Barbasol and Ohio State are Columbus based and the Jimmy and Murray have become friends.

For a guy who wasn’t sure about doing broadcasting after a marathon NBA career, Jackson has a microphone that gets quite a bit of use. You saw him this winter on the NCAA Tournament. He worked regular season college games for Fox and he was in the studio too where he’s quite comfortable.

When I caught up with him last weekend, he was leaving the Staples Center where he covered the Clippers on TV, teaming with Brian Sieman. This week, Jimmy has been in Atlanta to remotely cover the first round of the NBA playoffs for Turner.

There are three other players who played for 12 teams, Joe Smith, Tony Massenburg and Chucky Brown. The year that Jimmy was born, 1970, the league had only 14 teams.

Is Jackson going for a television record too? How many other guys called games for three networks and one regional network during the same season? Jimmy has worked this year for Fox, Turner, CBS and the Clippers regional network. He’s done college and now the NBA again.

At first, Jackson didn’t think TV. But his agent Mark Termini, convinced Jimmy to meet with broadcasting agent Maury Gostfrand, who in 2007 steered him toward the Big Ten Network. Jackson spent eight years there, overlapping a period when his son Traevon played at Wisconsin.

“When I heard about the possibility, I said ok, I’ll take a look at it. For me it was all about the NBA, I was so removed from college. My college interest at that point was really no more than following the tourney and Ohio State,” Jackson said, adding, “It all worked out and doing college ball is fun.”

I covered some interesting ground with Jimmy Jackson during our conversation:

Did you get a broadcast coach when you were first hired at the Big Ten Network?

Yes, Alex Wilson. She was terrific. Alex taught me the nuances, what to be prepared for, what it’s like when the producer talks into your earpiece and you have to keep talking yourself, how to navigate between a studio and calling a game. Each requires a different skill set how to mingle words and not to be repetitive. I didn’t want to walk in cold.

I like being at the game better. It’s where the action is. Others like the studio because they prefer not to travel. I don’t mind the travel. I love the interaction with coaches, players and officials. You don’t get that in the studio.

Who were announcers you would consider as your role models?

Two guys, Clark Kellogg and Kirk Herbstreit. I approached them immediately for pointers and both were helpful. Ohio State guys, of course!

Do you go about calling college games differently from the NBA?

When doing college ball, I stray away from heavy criticism of the players because they’re young and still maturing as opposed to NBA players.

You’ve been around Bill Raftery.

One of your colleagues, Chris Webber isn’t covering the tournament for Turner. He won’t be back next year either.

The man has business interests, lots of business ventures. But I can’t tell you why things at Turner ended abruptly.

So you’ll be working the NBA games with Brian Anderson.

Brian and I have built some chemistry doing the NCAA Tournament together. He’s smooth and easy going.

How about Turner’s debated decision to have all its announcers call first round games remotely and all do it from Atlanta?

Turner is very cautious. So, yes, we’ll be remote for at least the first round. I’m unsure about plans from there. The Eastern Conference Finals could be different.

Let’s talk about your playing days. You played for some great coaches.

They were all different. Larry Brown was particularly tough on point guards. Pat Riley demanded preparation. Under Riley, everyone was accountable. There were no shortcuts. Rick Adelman was laid back and an easier communicator than the others. Jeff Van Gundy had a softer tone and sense of humor. He showed parallels between basketball and life. (Kevin McHale, Jimmy Jackson and Greg Anthony, l-r)

After an early injury held me back, I changed my mindset and maintained a goal to be relevant whenever I was traded or moved to different teams. Lots of guys can’t make that transition- especially after being a key player – an important cog in rotations.

As you hopped from team to team, you must have made some good business contacts?

I got involved in real estate in Dallas where we opened restaurants that were very successful. It taught me lots because we also owned the property where the restaurants were situated.