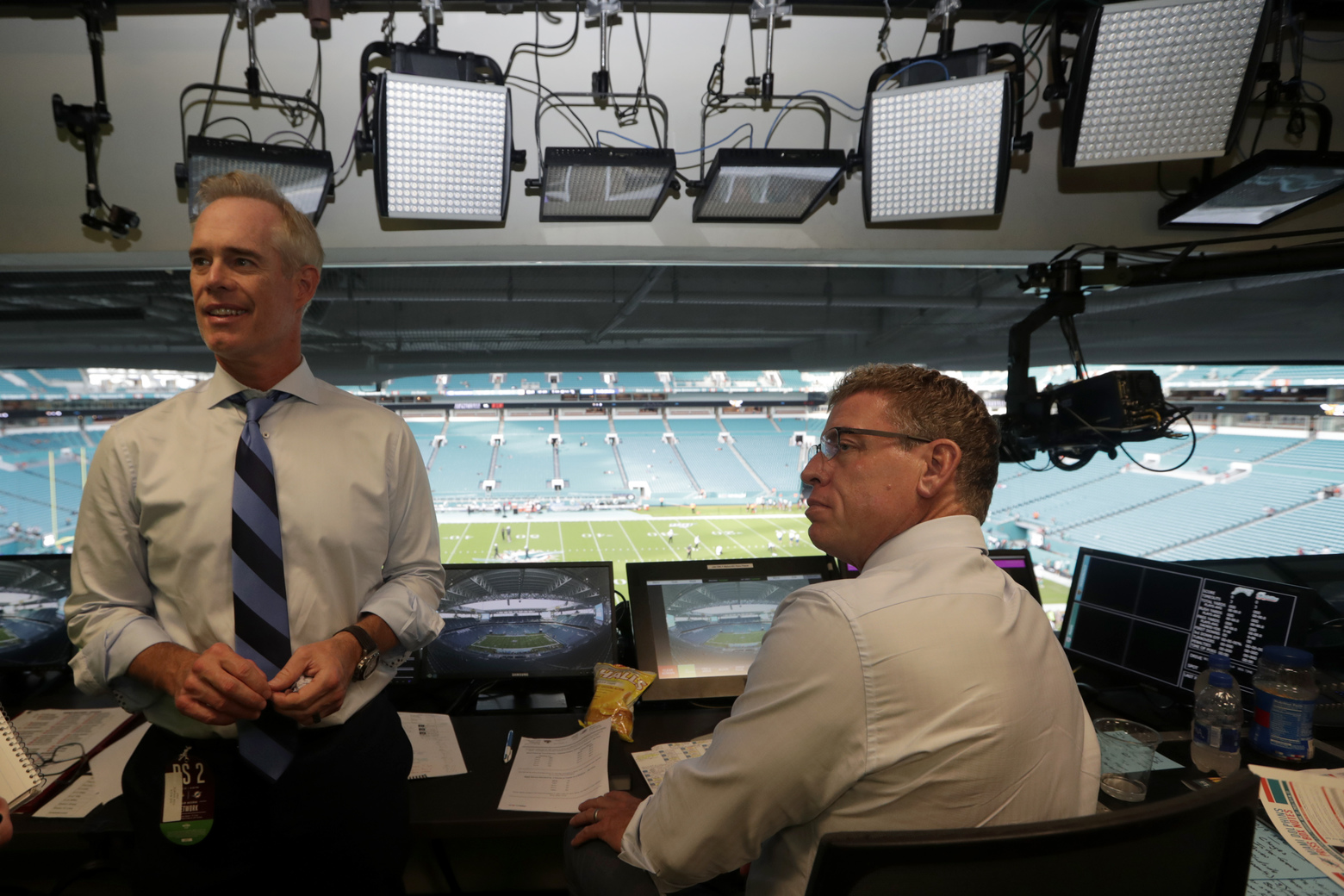 Joe Buck was the youngest broadcaster to ever do a Super Bowl, 35 in 2005. He will do his sixth on Sunday with his usual swiftness and aplomb. Joe was an infant in 1970 when the Chiefs played in their last Super Bowl and his dad Jack Buck did his only Big Game on network television.

I asked him last night, “What additional prep is required for a Super Bowl that you would otherwise not do during the regular season?”

“I think that having a very clear sense of NFL and Super Bowl history is required. It is always part of the equation, but being able to quickly add notes about specific Super Bowl games and what those games and moments led to in the big picture since 1967 is a focus.

“I can’t be fumbling around trying to go through books or notes in a pinch. I won’t have time. There have been 53 of them and these two teams (San Francisco and Kansas City) have played in eight so far. Start with those games and then fill in the blanks around them.”

Bob Costas is sports’ best ever studio host. He was 33 when he hosted the first of seven Super Bowl pre game shows for NBC. The seven were through a stretch of 29 years, 1986 through 2015.

I asked Bob what differentiates the typical Sunday pre game show from the Super Bowl:

“The Super Bowl pre-game has gone from an hour to a full blown day and night extravaganza. Throw in half time and post game and it’s an 11 or 12 hour deal.

“But it’s such a big event even the broadcasters have extra adrenaline. A good Super Bowl pregame has enough hard core football for knowledgeable fans, while also recognizing that tens of millions who tune in that day are only casual fans. So capturing the atmosphere and pageantry of it, the human interest angles and the entertainment aspect is an important part of it too.

On the eve of the 100th NFL regular season last September, Sports Business Journal asked me to do a piece on the all-time, top ten network play-by-play voices, top ten analysts, top five studio hosts and top five network radio announcers. Sports Business Journal, the bible of the sports industry, is generally behind a paid wall. This piece though is available without a subscription so you can check it out for the details if you missed it. The link is below. In summary:

Sports Business Journal extensive piece: Greatest ever on the air? Here’s one take.

Additional names to put a lid on NFL100:

Remember that Scully did only seven seasons of the NFL, on CBS. He did them brilliantly but the other nine men listed all did well over ten. Gumbel did two Super Bowls.

At Fox’ news conference Tuesday, I had a chance to spend a few minutes with Chris Myers who will work the Kansas City sideline on Sunday. Seasoned Erin Andrews will work San Francisco’s. Myers was raised in South Florida, so it’s a return to his roots. It’s Chris’ sixth Super Bowl on a sideline. His first, like Buck’s was in 2005.

Myers says he remains completely in Super Bowl prep mode through Friday night and relaxes on Saturday. Sunday though is tough because kickoff isn’t until 6:30. Sounds like he and others get up pumped and are likely restless through much of the day.

Myers is old school. He’s a fine play-by-play man, doing NFL games for Fox virtually every week during the season. He is also schooled to maximize the economy of questions he’s given with coaches and stars of the game.

A longtime ESPNer before joining Fox, Myers is a capable long-form interviewer too. At ESPN, Chris succeeded Roy Firestone on Up Close.

And you think they just plop down and broadcast.

Last August 23d, Fox’ Super Bowl voices Joe Buck and Troy Aikman came down to South Florida to get a hands-on feel for what it’s like to work at Hard Rock Stadium. The Dolphins were playing an exhibition game against Jacksonville. The two did a dress rehearsal of sorts way back then for this Sunday’s game. Buck hadn’t been to the stadium since his days calling Cardinals baseball. Aikman hadn’t been there since 1996 when he quarterbacked the Cowboys against the Dolphins.

Ken Levine, who did MLB play-by-play for the Padres, Mariners and Orioles, is best known for his work as a gifted screenwriter. His credits include M*A*S*H and Cheers.

For a third straight year, Ken will share his entertaining insights on the Super Bowl network telecast. Look for it Monday on this site.

Levine grew up in Southern California and like virtually everyone else there admired Vin Scully. He recently told me that he found audio of Vin doing a Dodgers-Cubs game on radio in 1969. Leo Durocher was managing the Cubs then and the team was in the thick of the pennant race through much of the summer.

Naturally, Chicago was abuzz and Vin talked enthusiastically about how Wrigley Field was awash with emotion. At some point in the broadcast, Scully told listeners that the Dodgers next stop on the road would be at Forbes Field in Pittsburgh. Vin said, “From here at Wrigley Field, going into Forbes Field in Pittsburgh will feel like walking into a haunted house.” Leave it to Vin to turn a word.

Ted Hedrick is 85. He’s the only man alive today who called Super Bowl I in 1967. He was the Voice of the Chiefs. Fifty years ago in 1970, Tom did the Chiefs-Vikings Super Bowl in New Orleans on CBS Radio Network.

Anyone want to follow the game in French or Hungarian?

For those who like the radio call, you can listen but it won’t be precisely synced with television. In other words, one will be behind the other.

This said, SiriusXM will run nine different versions of the broadcast:

Next year’s Super Bowl in Tampa is on CBS. Jim Nantz will call it. His partner will be Tony Romo, should he re-sign with the network. The following year, 2022, NBC has it. Al Michaels and Cris Collinsworth are slated to call it. Los Angeles, which Al calls home, will host it.

It’s like studying for the big exam. You feel you’re ready and now you sit and wait. The broadcasters have to be getting antsy.

It’s been comfortably warm in South Florida this week but Sunday night’s game will be played in cooler conditions. It will be closer to sixty degrees at kickoff and in the upper fifties by the time the champ is crowned. South Florida is in the sub tropics. There are no summerlike weather guarantees in February.

Lists are fodder for barstool debate, but I’ll say, wouldn’t it be possible to have Pat Summerall and Frank Gifford on BOTH pbp and analyst lists? Also, Paul Christman probably deserves a shoutout as one of the top analysts. I’m also trying to remember whether this site has done a top 10 local NFL announcer list?

There’s a case to be made for Jack Buck and Lindsey Nelson to be on the TV list, too. They did a lot of NFL TV and did it well.