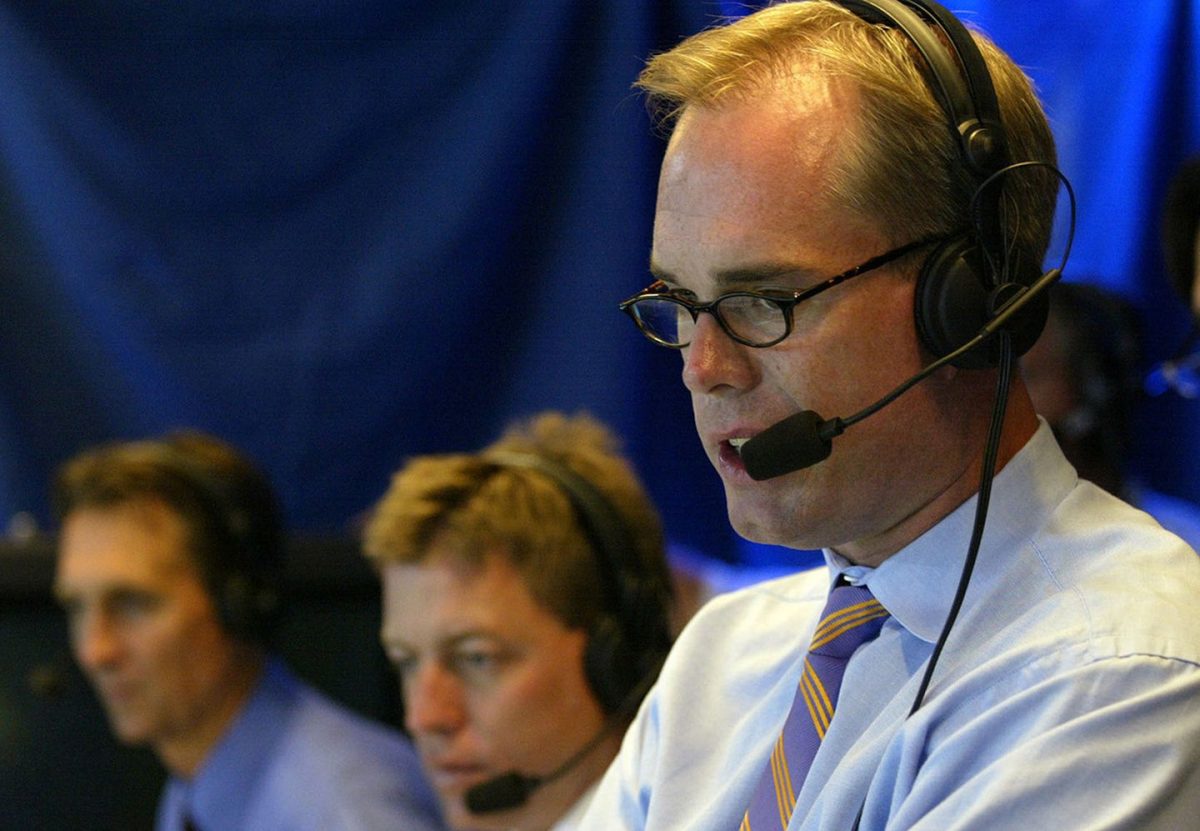 Joe Buck has done 22 World Series on national TV and six Super Bowls. He talks 'then versus now,' calling games in a culture of social media.

Like his dad Jack, Joe Buck is quick. Unlike his dad, he broadcasts in a different era, one with newfound values. His dad was a depression kid who lost his own father as a teen. Jack fought for our great country during the war and won a Purple Heart.

From dad to son, the American culture progressed in the view of many. Rule one is to be sensitive to the feelings of others, so commentary has to be tightened. That’s good.

But in Jack’s day using an F bomb around a woman was rare, saying, ‘Thank you, sweetheart’ was considered gentlemanly. Today, men using F bombs around women are commonplace. Greeting women as sweetheart or honey can get you fired or written up.

It’s a new world of rules and practices. So it’s safer to say little.

I thought I saw it all when I showed up for college. On my very first day, our urban New York campus was locked down. There was a student sit-in strike. A war was raging in Vietnam and the country was divided. The police were lined up choir like, shoulder to shoulder, doing their best to keep things from getting out of hand.

Unlike today, you could take sides. if your opinion was different from someone else’s, there were no public character assassinations. Then again, social media wasn’t born yet, neither was sports-talk radio.

Back then though, things weren’t right. Maybe we didn’t realize it. On late night TV, Johnny Carson cracked gay and Polish jokes and the country chuckled.

Now we’re prudent and circumspect. But we’ve gotten gun shy to even share stories. Curt Gowdy, Joe Garagiola, Jack Buck and Vin Scully entertained us. Baseball was a game of stories. Today, you hear fewer. And I believe one reason is concern for political correctness. All you need is one naysayer and you’re in deep trouble. So for the most part, play-by-play voices have turned sterile, bare bone fact spewers. And baseball is poorer for it.

In 1975, when the President’s appointee was booed at Fenway while throwing out the first pitch of a World Series game, Gowdy told the audience that the New England constituency was unhappy with high gas prices.

A generation later, a polarizing Donald Trump was at the World Series in Washington, and behind the Fox microphone Joe Buck was circumspect. His words were few and cautious. He knew that saying anything could be a third-rail issue in the day of social media where words are mightier than swords. Joe is smart. He kept his acknowledgement of the president concise and matter-of-factly.

The day of Gerry Ford is long gone. The ex-president said, “It’s one thing to disagree and another to be disagreeable.” Today, Trump says “Good morning,” and Pelosi says, “Why?” Pelosi extends a hand to Trump and the president turns the other way.

So  younger play-by-play voices say little. They might feel muzzled. Gone is the day when Al Michaels referenced the Ponzi schemer Bernie Madoff or Brent Musburger kidded about A. J. McCarron’s girlfriend.

I’m not sure I like it but I understand why. So be it.

Joe Buck leaves the good stuff for his book, Lucky Bastard, which was published in 2016. When I picked it up, I couldn’t put it down. I got to know him reading the text, something I never did watching him on TV where he delivers his call surgically and with little palpable emotion. If you don’t feel a connection with Joe devouring his book, check your blood temperature. Whatever personality he hides in the booth, he spews in the paperback.

Joe Buck and I got into some of this in the second half of  our Q&A.

Your book Lucky Bastard had me in stitches. It demonstrated that you’re a gripping storyteller. Baseball on TV is best suited for storytelling. Vin Scully built his reputation doing so. In addition to Scully, network announcers like Garagiola, Gowdy and Jack Buck all did it well . Costas still does. But you don’t sprinkle in many tales on your baseball broadcasts. Why?

Thank you for reading it! I am so glad I wrote it.

I agree on all counts. But no matter the sport and no matter the partner, the way I see my job at FOX, is to set up the person sitting next to me and give them as much room as possible.

When my dad started working with John Madden on TV, he posed a question to John, right after a play. The producer then screamed in my dad’s ear, “He doesn’t need that, he doesn’t want that.”

If you ask the analyst a question, you are making that person answer what you want to hear about instead of leaving the hole open, allowing him or her to talk about whatever he or she wants. You end up pigeonholing your analyst. John Smoltz and Troy Aikman do not need that and more importantly they do not want that. This is not to say I NEVER do it. But I pick my spots. Let’s not forget, I believe that Vin spent the majority of his time with the Dodgers alone in the booth. Which is amazing! If I was in that situation, I would be totally different – totally.

Billy Packer who called the NCAA Tournament for 34 years told me in 2018 that he couldn’t broadcast games today because of PC. Would you broadcast games differently if the PC police weren’t as harsh?

I don’t know. There isn’t anything that has crossed my mind or that has come out of my mouth that has tested that. Maybe I will tomorrow out of sheer ignorance, and without malice, but I cannot think of any examples. No doubt my dad and his generation were more cavalier with what they said and rarely held back. I am not saying that was a “better” time, just different. A lot of their personalities were formed with less stringent PC rules. But I believe I have been aware of the boundaries, and let’s face it, a lot of the changes along those lines needed to happen.

When you began your career, social media wasn’t born. How has that changed broadcasting styles? Are announcers too cautious and thus too sterile?

No doubt. But that is okay. I have seen the good side of social media as well. They are powerful platforms. Most of the time it feels like you’re bombarded with how bad you are and the more noise, the more important the event. Most of it – “announcer X” is so effing stupid. Or – this guy sucks. Or, why does announcer X insist on rooting against my team?

You cant fight it, and you cant get wrapped up in it. Laugh it off is all you can do. I invite anyone saying how dumb so and so is, to try it for themselves. Put on the headset and comment in real time to millions of people who are sure they know more than the announcer. It isn’t that easy.

It is why the same people doing the main sports now on the main networks are the ones who were doing it 20 years ago. It is a unique skill set. There is no prompter and there is no safety net. So step right up. When young people are starting out I beg them not to read that stuff. Settle in, work hard, and don’t go to Twitter to see if you are any good.

Find a few people whose opinion you trust, ask them for an honest assessment and grow and learn. And yes, the “gotcha” police on social media have taken some of the fun out of it. The fewer risks you take, the less interesting you are. Playing it down the middle because you are scared to get ripped on Twitter is a weak way to go, but we all fall into that trap.

I listen to myself, even at 27 doing a World Series at Yankee Stadium, and I hear someone who is less afraid to make a mistake than now – 24 years and 22 World Series later. Social media has a lot to do with it I believe. Because when you are there rooting for neither team, the perception by fans who hear hometown announcers all year long who root along with them, is that you’re against both teams. And I am the only person to do every World Series on national TV in the age of social media, so I have dealt with that phenomenon the most.

In 1996, you dad introduced presidential Republican candidate Bob Dole at a rally. He was criticized for it but staunchly defended it. Today, when the public can be faceless and brutal behind social media, would Jack express his political beliefs in a public forum?

I think my dad would probably hold back. But he wasn’t a national guy then. He was past all of that and I am sure figured after having grown up with nothing and getting shot in Germany during WWII while fighting for his country, he had earned the right to support whomever he chose to support. He was his own man. I often wonder how all of his generation would handle this ‘cancel culture’ notion. I know this, he wasn’t scared of too much.

You’ve done the crème de la crème, Super Bowls, World Series and many of each. You’ve also called a Major in golf. What event is still on your bucket list?

I have no broadcasting bucket list. I swear on a stack of Bibles that is true. I am smart enough to realize I have done 10 times more than I ever thought I might. I am so happy to watch others work and I am so happy to have time at home to be with my wife and kids.

Great stuff and I’m glad he wrote the book, too. I think back to when Howard Cosell was pilloried for calling Alvin Garrett “that little monkey,” and Dick Enberg went on NBC the next week and defended him, saying it was absurd to think Cosell was racist–and I completely agree. I also think of Red Barber. Roger Kahn, who got a bit cranky as time went on, minimized Barber’s role in 1947, saying Brooklyn was the right place for a Black player to debut. I agree, but Barber had so much power with his listeners, he could have made life… Read more »