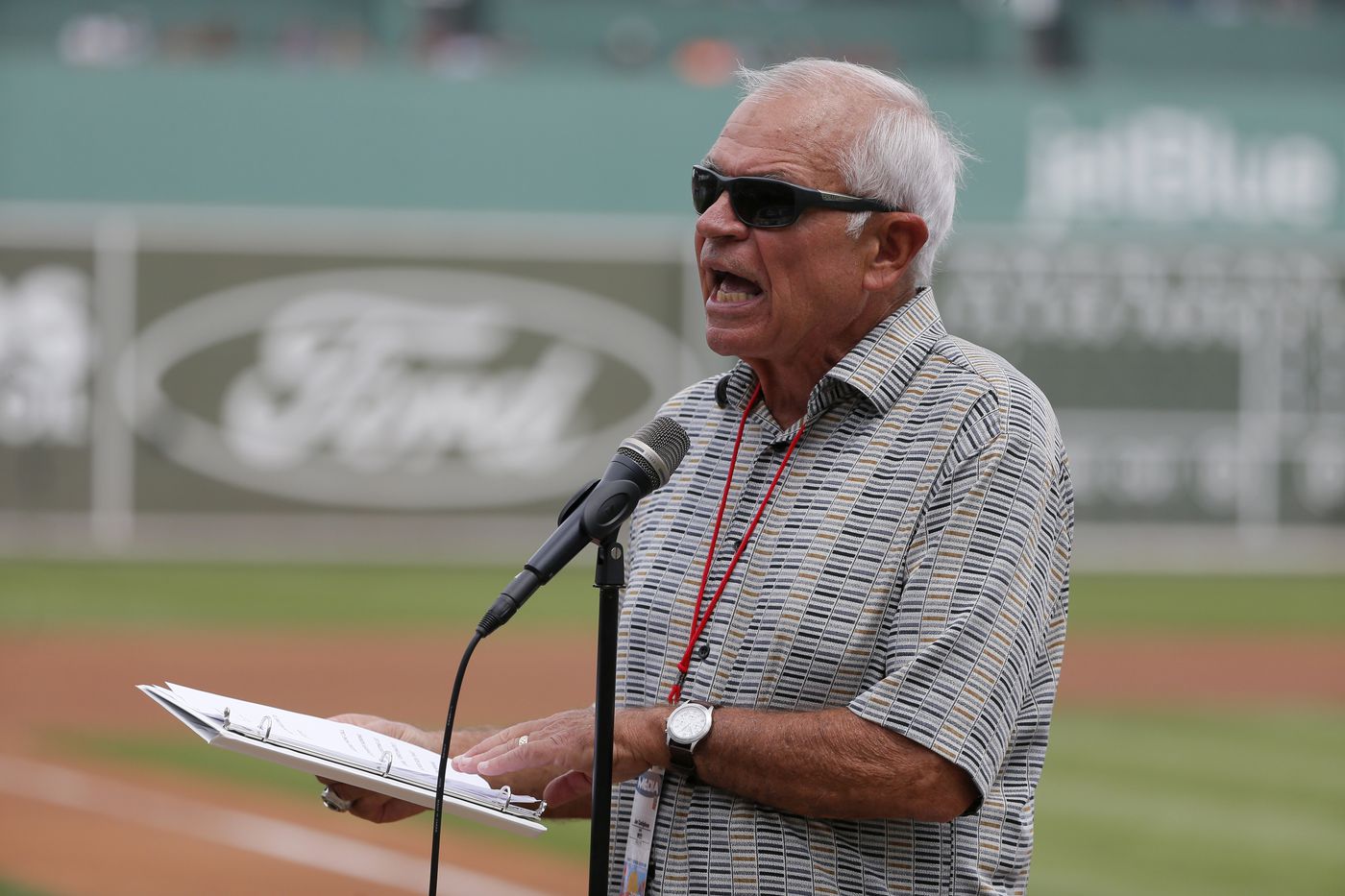 His voice says Red Sox baseball. Joe Castiglione has been calling the team's games longer than any previous announcer.

For four decades, his voice has wafted softly through New England summers, a steady soundtrack of baseball on the radio. From Reagan to Trump and through four presidents in between, from Republicans to Democrats and back again, and from sorrow (1986) to glory (2004), he’s always been there; steady and never overbearing.

Joe Castiglione has always waved the baseball flag proudly, be it through thick or thin or through the dominance of the Celts in the 80s and the Pats in the 2000s. No nicknames or shtick, no hype and no gloom, somewhere in between, always sunny, easygoing and cheery. Stats rarely, stories galore. He gets it. Joe knows what it takes to make the broadcasts entertaining.

The history of baseball on Boston radio is long, beginning with the depression years when Fred Hoey presided, then the war seasons and beyond when Tom Hussey and Jim Britt chaired the booths. In those early years, baseball voices in New England did both the Sox and the Braves, playing in separate Boston parks. Yes, the same Braves who’ve moved twice since, Milwaukee in 1953 and Atlanta in 1966.

Then Curt Gowdy came along in 1951 and in time the Wyoming Cowboy’s partners, Bob Murphy and Ned Martin. Other names also held the mic, Ken Coleman, Jim Woods, Dave O’Brien and Jerry Trupiano. Jon Miller too left his fingerprints in Beantown for three seasons.

Joe Castiglione, 73, went to school at Colgate and later did graduate work at Syracuse. He grew up a Yankee fan down the road in New Haven, began his career on TV and built his identity on Boston radio in Fenway.

For most of his first 36 seasons, Joe had one partner, one at a time and one for an entire season. Last year some huckleberries as the late Phil Rizzuto might have said, turned the Red Sox booth into a revolving door. Or as Rizzuto spewed when something similar happened to him in the Bronx, “Holy Cow, I’m getting spiked on my way into the booth.” In 2019, it seemed that every week, Castiglione had another partner. Good, solid names like Sean McDonough but week to week the only constant was change.

Little thankfully has changed in the way the soft spoken Castiglione presents the game. Listening to him is like stepping into a comfortable pair of shoes. His tone is redolent of a summer’s day when Fenway is open and vibrant.

We caught up with Joe who like millions of others is waiting for baseball’s, “Play Ball.”

You grew up in New Haven. Who were the broadcasters you liked and how did they influence your style?

Growing up in New Haven as a Yankee fan, my inspiration was Mel Allen, to me the greatest ever. Mel’s descriptions, voice, enthusiasm and story-telling abilities really captured his expertise and true love of the game. He was my inspiration for becoming a broadcaster and my goal was to emulate Mel. I wrote him a letter after his heart surgery in the 1980s to tell him how much he meant to me and actually got to broadcast a few of the same games he did when he came back to call Yankee games on cable. One game we shared was the (Dave) Righetti no-hitter on July 4, 1983.

I was also blessed to be mentored by three wonderful MLB announcers. The late Bill O’Donnell, long time Oriole announcer, whom I met when I was a freshman at Colgate and he was broadcasting Syracuse basketball. That night, in 1965, Colgate took a Dave Bing led Orange team to triple overtime before coming up short. A rebound shot by Jim Boeheim sent the game to the third OT. I accidentally picked up Bill’s gloves after the game and that’s how I met him. He was the first broadcaster I called when I got my first MLB job, the Cleveland Indians on TV in 1979.

Two other great mentors were my partner with the Red Sox for my first seven years, Ken Coleman, who was instrumental in my coming to the Red Sox. Ken helped get me established and accepted  and Ernie Harwell who became a dear friend and a guy I would call for advice.

If this season ever gets started, it will be your 38th with the Red Sox, how has radio baseball changed since you started in 1983?

Since I started with the Red Sox the greatest change on radio broadcasts has been use of the internet for dialing up instant information. No longer do we have to wonder who did what and when. The answers are instantaneous.

Of course, the increased length of games has resulted in more conversations with boothmates and more time for storytelling.

Drop in commercials were in vogue when I started with the Red Sox and remain in the same form today.

Painting the word picture of what is happening on the field remains the central element and is basically unchanged.

There’s an art of storytelling doing baseball, particularly on radio. Is there less of it now, since you grew up?

Many aspiring broadcasters today prefer the television studio vs. play-by-play, does that surprise you?

I am surprised that some young broadcasters prefer the TV studio over play-by-play.  My own son Duke loves play-by-play but anchored for twenty years in New York and is now at Channel 5 in Boston. I began my full-time career as a TV sports anchor in Youngstown and Cleveland because that’s where the opportunities were, but always longed for baseball play-by-play. The TV studio is sterile and anchoring can be repetitive. I am much happier being at the ballpark where the action is live and the results unfold as we describe them.

What makes baseball the hardest sport to do?

Some consider baseball the hardest sport to do because of all the dead time. That 5 and 1/4 ounce sphere is in action less than 10 minutes during a 3 hour game. Also baseball is the only sport where the defense controls the ball so that means the pace of each game is different and the pace of the game can change batter to batter.

I have always thought hockey is the most difficult sport because of the speed of the game and players change on the fly.

If baseball goes to some improvised or condensed schedule to get some games in this year, would you like to see some experimentation with the rules? Picking up the pace of the game seems to be paramount on the minds of many.

I would definitely like to see some changes if baseball resumes this year starting with a pitch clock which I have seen work in the minor leagues; anything to pick up the pace of the game. I like the three batter rule for relievers. I would also not be averse to 7-inning games to start, if that would be needed to help get pitchers ready after the long interruption.

Of all the Red Sox managers you’ve worked with, who was the most challenging?

I have been blessed to have worked with 13 managers with the Red Sox including Ron Roenicke currently. I don’t think I would categorize working with any of them as challenging. All have been accommodating in recording the managers’s show with me, some giving it more thought than others. Joe Morgan (not the Hall of Fame infielder) was a favorite who would think about topics as he gardened in the morning. Terry Francona was always willing to answer anything, even controversy, “Just ask me.  I’ll come up with something.” The Bobby Valentine year was tough but having a personal relationship with him and our Connecticut backgrounds made it easier. Almost all the managers were conscious of our scheduled times to record. Having mutual trust with each manager has been critical.

You’re known as a radio guy but when you started in the late 70s, you did do some TV in Cleveland, both Cavs basketball and the Indians. Which medium do you prefer and why?

I prefer radio except for the $$$$$. When I started in television baseball, the pre-cable days, TV broadcast schedules were limited. My first job with the Indians in 1979 consisted of a 40 game schedule…mostly weekends and some summer evenings.

We were on the local CBS affiliate which was not going to preempt prime time programming for a 6th place team.  Also radio is an announcer’s medium. As Ernie Harwell once told me, “Nothing happens until the announcer says it does.” Television is an analyst’s medium and a director’s medium. The play-by-play announcer is the table setter, though the role is an important one in keeping order and bringing out the best in the analyst.

Your broadcast booth has become a revolving door. Lots of broadcasters. Your boothmates seem to change series to series. Would you prefer having just one other teammate, as was the case for years?

Last season was more of an aberration with so many partners. I have almost always had a single partner. Ken Coleman, Bob Starr, the Burly Broadcaster, Jerry Trupiano, Glenn Geffner, Dave O’Brien and Tim Neverett with fill-ins for Dave OB when he was doing ESPN baseball. This season will be more traditional. Will Flemming (Dave’s brother) will be my primary partner, an outstanding young broadcaster with exceptional skills, pedigree, cache and talent whom I think will be a most worthy successor to me. Sean McDonough, a good friend and one of the most talented and versatile broadcasters ever, will also have a schedule with me and so will Lou Merloni, the former infielder and now sports talk host who provides excellent analysis.

When you eventually hang up the cleats, how would you like to be remembered?

It must have been so difficult for him to have a different partner each week. If you think about it, this went on at the networks with their NFL coverage, especially, it seemed, CBS in the late 1970s, other than maybe the top two crews–and I noticed that almost every year, Vin Scully in the #2 crew had a different partner. It takes time to develop a rhythm.