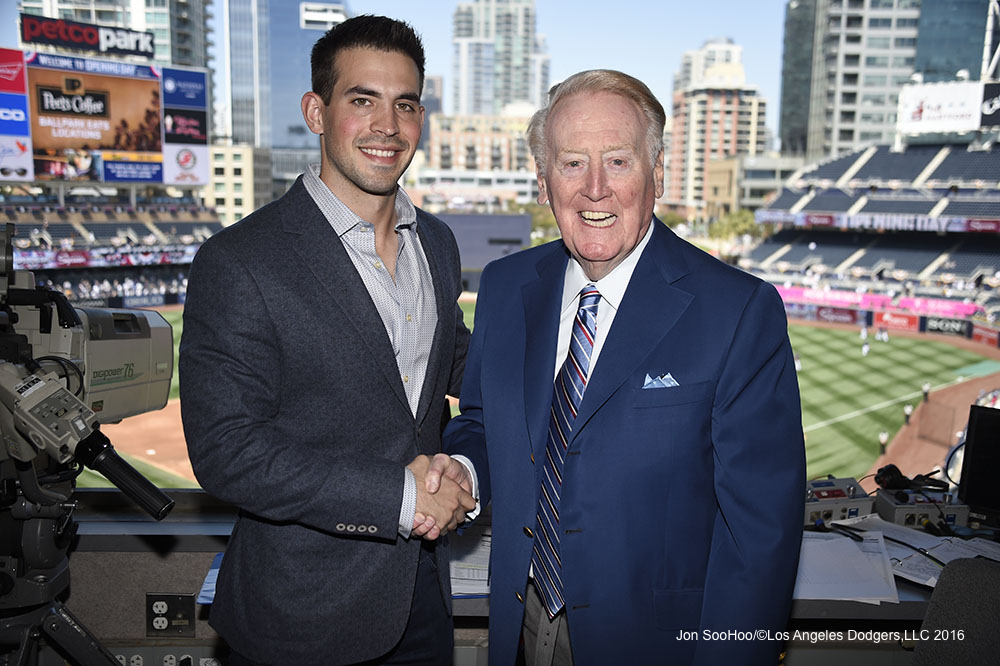 Joe Davis (l) and the late, iconic Vin Scully. Talk of replacing Vin. No one ever will! Joe attended Beloit College.

What would you rather do? Follow Willie Mays as the everyday centerfielder in San Francisco, take over for John Wooden as UCLA’s basketball coach or build a customized house next to one designed by Frank Lloyd Wright?

That’s essentially the impossible challenge faced by Joe Davis, a native of Potterville, Michigan about 100 miles west of Detroit. He was a quarterback at D III Beloit College in Wisconsin. In the off-season, he announced baseball and basketball.

After starting in a backup role with the Dodgers in 2015, Davis humbly said, “Hopefully, some have listened and at least learned to tolerate me.” Joe goes about his business quietly. He talks about his most treasured voicemail. It was from Vin congratulating him on getting the fulltime gig. Davis says, “I’ve saved the message a million places. I don’t want to ever lose it.”

Joe sharpened his skills calling games of the AA Montgomery Biscuits. The precocious Davis got assignments from ESPN at age 24. In 2016, Scully’s final season when he worked only at home, Davis did the road games. Last season was Davis’ first fulltime. His dad Paul was the head football coach at Potterville High School and now travels with Joe, serving as his spotter on football telecasts.

When did you know you wanted to be a sportscaster?

Really early on, I think it’s part of the reason why I’ve been fortunate to have this stuff happen to me. Probably in junior-high, I knew exactly what I wanted to do and started paying close attention to guys when I listened to them call games. When I was watching games on TV, I was paying as much attention to the guys calling the games as I was to the games themselves. And because I knew at an early age, it kind of guided my decision-making for lack of a better way to put it.

Did you benefit from going to a school without a broadcast program?

I think that it’s obviously great to go to a place like Syracuse or another broadcast powerhouse college. You get an incredible Rolodex of people that have also gone there, who can help you out and we all know how important networking is. The benefit I had at a smaller place (Beloit)  is that because it wasn’t a broadcasting school I didn’t have any competition to get any reps. Nobody had ever even heard of play-by-play broadcasting when I got there. So I kind of got to blaze my own trail. The recruiting pitch from the football coach was that I could announce the basketball games right away. At places like Syracuse that doesn’t happen right away.

To a broadcaster like yourself, what is the advantage of having played sports at a competitive level?

I’m the son of a football coach. I grew up around the sport. I think it definitely helps. It probably adds another little layer of experience that others in our business might not usually have. Specifically, in football, it helps. Having played and having been raised in a football household I can take my analysts a step further than most others.

As a quarterback it was always important that I be steady and the calmest guy in the huddle. In the big moments of broadcasts, I think it’s a transferable skill when doing play-by-play. When those big occasions hit and the crowd is going crazy, the tendency is for your heartbeat to speed up. It’s not always easy. Because of the experience I had controlling my heart rate and staying calm as a quarterback, I keep my composure in big moments as a broadcaster.

Tell us about the serendipitous email that you received which turned into a major break while you were still doing AA Baseball with the Montgomery Biscuits.

Yes, the sender was Dan Quinn. He worked in PR at ESPN. At the time, I had no idea who he was, I just thought he was a random fan…and he was. He had gotten hurt playing a pickup soccer and was on leave from work. He happened to read about the Montgomery Biscuits, thought it was a cool name and logged onto the website to buy a hat. He also happened to click on the ‘listen live’ link and enjoyed what he heard and kind of became a Biscuits fan.

We developed a friendship and he came down to Montgomery toward the end of that year to see the ballpark. In passing, I asked him, “Hey, would you mind introducing me to somebody at ESPN 3 or ESPN U?” He didn’t know anyone that well but had the means to find the email address or phone number of someone who I might want to get a hold of there; just to get a foot in the door. He opened that door.

You almost took a job with Lake County, a team that went under. Do you think about what the repercussions would have been?

My wife Libby and I have talked about it before. Can you imagine if we hadn’t gotten the Biscuits job and we had gone to Lake County? I don’t know. I probably wouldn’t be where I am now. I think the guy who got the job had to quit on air. Mid broadcast, he shut the thing down! To think about how awful of a situation that is and how close I was to winding up in it. Who knows how that would have altered the trajectory of my career! I’m glad that I don’t know and never will.

How often are you asked about replacing the legendary Vin Scully?

Just about any interview that I do. Honestly, Logan, I knew coming into this job that it would be the case. It’s also why the job is as special as it is. It’s something I talk about any time I do an interview and I’m ok with it. It’s also the responsibility of following Vin in an organization with as much history as the Dodgers. I get it. He’s the greatest to ever do it. I get that. I’m the guy following him and that’s a big story. I’m totally ok with it being the headline anytime my name comes up. I’m flattered that it’s the case.

What was the advice you got from Vin Scully?

He had an incredibly long career. But he hasn’t gone without passing a few things on to me. The biggest one was to be myself. That’s something that Red Barber told him when he stepped into the booth in 1950. It seems simple but it’s not. When we take these jobs, the tendency at least, is to try to be what we think we should be in the position. The most important thing, especially in baseball because you’re going to get exposed if you’re not, is to let yourself be yourself. It seems like simple advice, but it was great advice from Vin.

The other thing that I really have taken with me from our conversations is that he’s known for being at his best in the biggest moments. I was curious what his philosophy was and it kind of goes back to what we talked about earlier, the whole quarterback connection of trying to stay calm and lower your heart rate and not getting too excited when the moment arises. Vin compared it to your house burning down and all hell breaking loose. You’re probably not going to get yourself and your cat, all of your belongings and all your family out of the house if you’re freaking out. You’ve got to be the calmest person in the room. And it’s kind of the same way when the big moment happens and that place is going crazy. If you let your heart beat go too fast and your eyes too wide you’re probably not going to do the moment justice. So just the idea that the bigger the moment, the calmer you have to make yourself. Getting that advice from the greatest to ever accomplish that, is advice that’s really special to me.

Share a horror story from your time in the minors.

Opening day, my third and final year with Montgomery, we were at Pensacola opening the new ballpark there. It was a waterfront ballpark, it was going to be beautiful. It was a gorgeous day and we get down there, go into the press box, four hours before first pitch, and they’re still in there working on stuff. They’re under the counters putting in screws, getting the counters mounted to the wall. We’re a few hours from the season starting and the counters still aren’t fixed in permanently. We figured if this is the worst thing it’s not a huge deal, we knew that the park wasn’t completely ready. But they didn’t have the phone line hooked up in the visiting radio booth. And as you know, you need a phone line to do a radio broadcast. This was 2012 we weren’t that far along in technology in minor league baseball broadcasting. We wound up doing the game opening day, that you wait all offseason for, doing it off a cell phone. We were going to have to hold the phone up to against our ears the whole time. When I say we, Aaron Vargas was my number two that year, so this was his first day in the booth. We taped the phone to a Mountain Dew bottle to mimic a microphone stand and that’s how we did opening day.