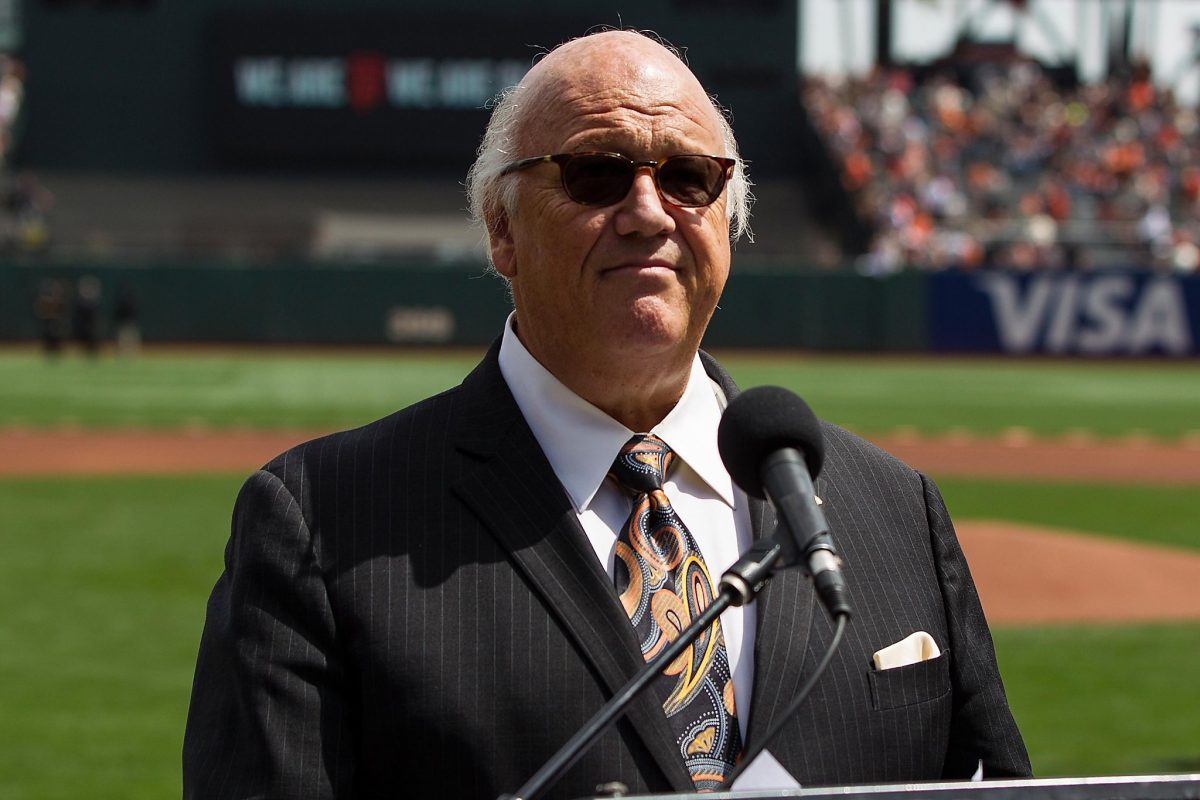 Jon Miller, started with A's in 1974 as a 22 year old. His baritone is still rich 46 years later and his stories on-air still regale listeners.

Nationally, his sound was unmistakable. Smooth, deep and syrupy, the perfect soundtrack for 21 seasons of  baseball on Sunday nights. From the first Bush to the second and all the way through to Trump, the emollient powers, timbre and range of Jon Miller’s voice has always been reassuring. After all these years, his very delivery says it’s summertime. 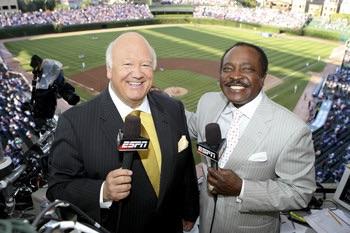 Miller did his last game for ESPN ten years ago, (with longtime partner Joe Morgan, left). Technology has rocked at a blistering speed since. Smartphones are ubiquitous, apps are part of the daily jargon and video streaming are the fastest growing platform through which viewers consume sports.

You might argue – and cogently so – that the 90s through 2010 were cable television’s golden years. When Miller and ESPN parted ways a decade ago, cord cutting was only for newborns not for cable viewers. Cable has since met its enemy, technology.

When Jon Miller and Joe Morgan sat calmly in the Sunday night booth, ESPN was at its peak; the network was an indispensable source for sports fans. On Sunday nights in spring and summer, baseball on television meant ESPN. The network owned the window exclusively. Miller wafted into our homes mellifluously, regaling us in a measured calm rhythm, sprinkling play-by-play with anecdotes and entertaining oddities.

Baseball broadcasting has since changed too. The two man booth is often a three man booth. Can you imagine Vin Scully calling games flanked by two garrulous analysts fighting over the mic?

The title play-by-play is becoming a misnomer. Today, the role has been relegated to a set-up man. So be it. Technology is to blame here too. Too many camera angles, an overbearing number of replays and maddening analytics.

Other than the magnificent raconteur Bob Costas on MLB Network, Miller on ESPN was the Last of the Mohicans, carrying on, on network TV in the tradition and form of Garagiola, Gowdy, Jack Buck, perhaps McDonough and Scully, of course.

Miller started in Oakland at age 22, as a sidekick to the veteran, Monte Moore. He later worked for the Texas Rangers, Boston Red Sox and Baltimore Orioles. He’s been with the Giants since 1997.

In the first of a two part series, we talked with the Hall of Fame’s Ford C. Frick winner about his years in the game.

You’re a son of radio. You grew up in the Bay Area when not many Giants games were on television. Tell us about the team’s prime radio voices, Russ Hodges and Lon Simmons. What did you learn from listening to them?

Russ and Lon both had deep, resonant voices but also a genuine warmth. They were very likable and it was easy to tell they had great affection for one other. They also had the gift of painting a vivid verbal portrait of the action as it happened such that you always knew exactly what had just happened.

I grew up taking that for granted, not realizing until later on that this was not a given with all announcers. Over time I came to realize how lucky I had been to grow up listening to Russ and Lon (and Bill King who early on worked with them as a producer and fill-in announcer before leaving to broadcast Warriors basketball). Without even being aware of it, I was learning as a kid how to be a play-by-play radio broadcaster from those three.

As you can imagine, it’s no surprise to me that all three of them—my first local baseball broadcasters—have won the Ford C. Frick Award from the National Baseball Hall of Fame and Museum in Cooperstown. But most importantly for me, I learned the game from Russ and Lon, its history, and the long rich history of the Giants. Hodges, of course, had started with the Giants in New York in their storied days at the Polo Grounds.

Russ Hodges will always be identified with and the unforgettable Bobby Thomson home run that he hit off Ralph Branca.

Each season in the 60’s, usually between games of a doubleheader, he would recount the Giants amazing comeback from 13 1/2 games behind the Dodgers with only 44 games to go, ultimately culminating in Bobby Thomson’s ‘Shot Heard Round The World.’ I thus assumed, that sort of a thing was a birthright of all Giants fans, especially when they did something very similar in their early San Francisco days in 1962.

You were young when the Giants and Dodgers battled in another three game playoff.

I was almost 11 years old when they once again, 3 outs from elimination, came from behind in the 9th inning of a tie-breaker playoff to beat the Dodgers for the NL pennant. I was hooked! The Giants, Russ Hodges, Lon Simmons…thanks so much for everything!

You spent 21 seasons as a national baseball broadcaster for ESPN, primarily on television as the lead voice of Sunday Night Baseball. What do you miss about doing network games?

Andy Baggarly of The Athletic called me last week, asking a similar question. It seems April 15, 1990 was the night of the very first ESPN Sunday Night Baseball telecast. 30 years ago! Wow! I was grateful for the opportunity. SNB really became baseball’s Game of the Week as it was an exclusive window with no other games being played. So it was exciting to be involved.

The best part of it was working with Hall of Famer Joe Morgan for 21 seasons. We enjoyed each other, we both loved the game and loved being at a ballpark first and foremost. Which is not to say it was always easy. We argued, often heatedly. We debated, with ferocity. And often we did both while working the game!

I spoke to Joe last week and finally, after solving the Pandemic and all of baseball’s problems, one of us said, ‘Hey, we’ve been talking for over two hours. Maybe we should get off the phone!’

Some of my best of SNB came when, during the same weekend, I’d be at Dodger Stadium for a Giants/Dodgers battle on a Friday night. Saturday morning, fly to Boston and get ready for Sunday’s Yankee/Red Sox drama at Fenway. Then Monday, head to Chicago and rejoin the Giants at Wrigley Field. When you love baseball, that’s just a dream job! From Dodger Stadium to Fenway Park (or Yankee Stadium) to Wrigley Field…all in 4 days time, including 2 of the greatest rivalries in sports. And that wasn’t such an unusual weekend in those days, either. And yet, I truly don’t miss the ESPN gig at all. It was time for me to leave (as my wife Janine had reminded me again and again for the last couple of years of my spending Mother’s Day, Father’s Day, Memorial Day, Independence Day and Labor Day with Joe at a ballpark, far away from home).

As I say, I was grateful for the chance to do it and am blown away by the fact it lasted for 21 seasons! I’m also excited SNB is still around after 30 years. I hope it’s still going strong for another 30. I’m proud to have been a part of it.

Assuming the season starts, this will be your 24th with the Giants. Previously, of the five teams whose games you’ve called, your longest stint was with the Orioles, 14. When you arrived in Baltimore in 1983, the beloved Chuck Thompson was beginning to wind down. How hard was it following in the shadows of Thompson?

When the Orioles called me about perhaps working their games, the legendary Chuck Thompson had decided to semi-retire. His longtime partner, Bill O’Donnell had tragically died of cancer and Chuck told the Orioles he really didn’t want to work 162 games any longer (He was still doing Baltimore Colts football on the radio, too). So Chuck was set to work only 50 games on over the air TV with Brooks Robinson, and no radio.

It was the O’s longtime radio/TV duo of Thompson and O’Donnell—who had split radio and TV duties for over 20 years—whom I was hired to replace on radio only, with Chuck on TV only. So Chuck was still there and I got to spend a great deal of time with him when he traveled for road telecasts. He was one of my favorite people in the world and had the greatest voice of any sports play-by-play man I’ve ever heard. So, for starters, it was a thrill to go to Baltimore and get to know Chuck.

Any incidents with Chuck that stick out?

Once, when heading to California for a series with Oakland, Chuck told me he regretted going to the Bay Area all those many years with the O’s and the Colts and never really seeing the sights. So, on our day off, I took him up to Marin County to see the great Redwood trees in Muir Woods. When we walked into the park, confronted by the stunning presence of the gigantic, ancient trees, Chuck was awestruck.

Standing in the cathedral-like stillness beneath the canopy of the ancient redwood giants, he looked up and said in that booming, instantly recognizable voice, ‘Holy Guacamole! Will you look at that! Ain’t the beer cold!’ Following which people all around us shouted, ‘Hey Chuck! Go O’s!’

The other great thing for me my first year in Baltimore was how good the team was. Cal Ripken was the AL MVP although I thought Eddie Murray should’ve won it. The Orioles won the pennant and then the World Series! I was so grateful for always having excitement and good news to report. When your team has a great win, you get a lot of compliments when you’re moving around town the next day, ‘Hey Jon, great broadcast last night!’ Not so much after a loss, however.

Thus, I was a lucky broadcaster. My first year covering the Orioles, the team was great, the fans set an all-time franchise attendance record, over 2 million for the first time, Cal was the MVP and never missed an inning and they won it all.

It was an all time perfect year to be the new broadcaster in Baltimore!

What a great broadcaster, and what a great interview. I know that Chuck Thompson came back later to fill in on Orioles radio, though usually when Miller was off for ESPN, so I gather he didn’t get to work with him too much then, but it meant more time together. When we talk about all-time great broadcast teams, only a couple of three-man crews are in the Frick wing of the Hall of Fame. One is Hodges-Simmons. The only other one I know of is Caray and Buck with Hamilton and then Garagiola, though a couple of other teams had… Read more »