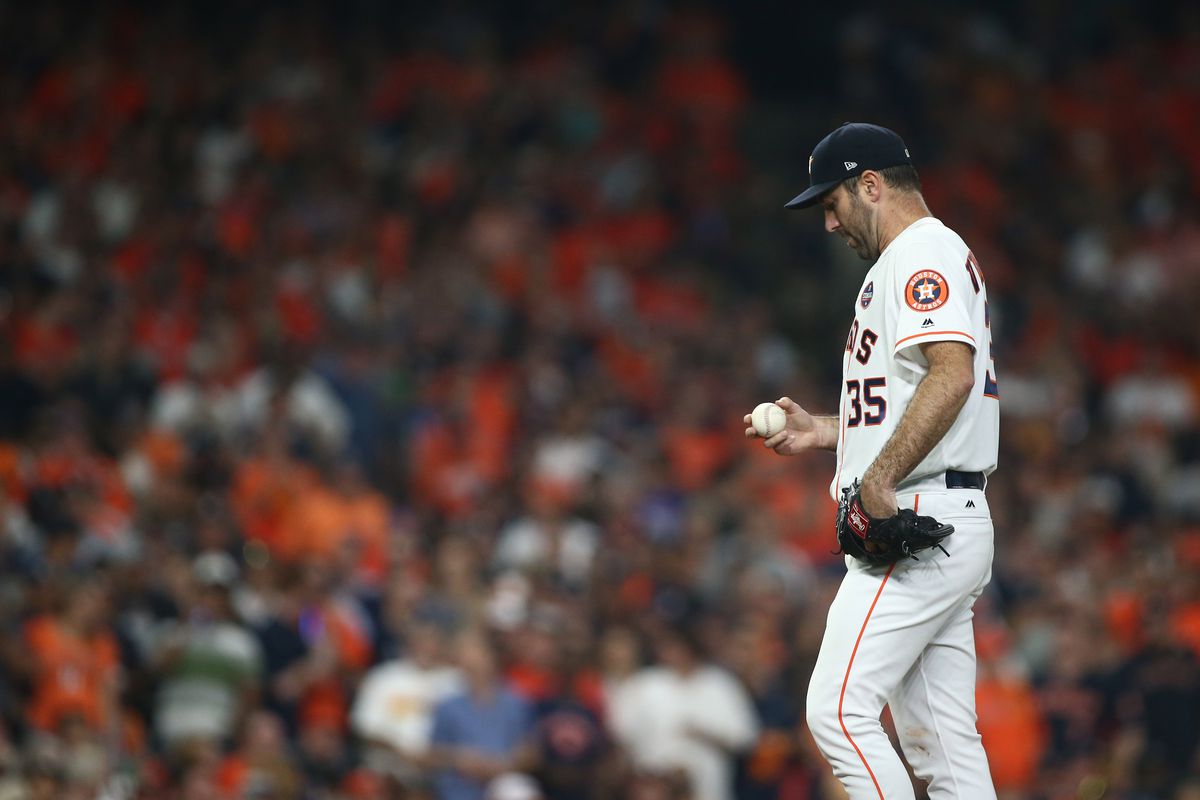 Ace Justin Verlander on the mound. Broadcaster Jon Miller strongly suggests that baseball call strikes when hitter's leave the box. The pace of the game has to pick up.

In part two of our interview with Jon Miller, we took a deeper dive into baseball, how it differs from other sports and what can be done to pick up the game’s lumbering pace.

Miller, who did 21 years of Sunday Night Baseball for ESPN also addresses the emphasis on analytics and repetitive replays on television. At 68, Jon also talks about his own future.

Through his career, the Northern California vet has worked for the A’s, Rangers, Red Sox, Orioles and Giants. He began in Oakland as a 22 year old in 1974. Miller is a winner of the coveted Ford C. Frick Award given annually by baseball’s Hall of Fame.

Should the baseball season be played this summer, still a fairly big if, Miller will again be calling games of the Giants, the team he followed as a kid.

You’ve done other sports, be it football, basketball, even soccer. Is baseball the most difficult to broadcast? If so, why?

Baseball is the most difficult because you may meander along for innings at a time weaving stories into the play-by-play without a lot of major drama. But then, a bases loaded gapper! Just like that you have 4 baserunners racing around the diamond, trying to get home; two outfielders chasing the ball down at the wall, a throw to one of two or even three possible relay men (especially if Derek Jeter happens to be involved), followed by a throw to the plate.

After a good long while with a relaxed rhythm of story-telling, keeping track of the score, giving an important out of town scoreboard update, having a few laughs…the Stanley Cup Finals break out!! And you’d better be ready and right on top of it. That may be the key play of the game and the most memorable play of your broadcast. Most importantly, it will likely be the call your audience will remember, good or bad. That’s why baseball is the toughest, #IMHO (in my humble opinion).

Vin Scully says that television puts too much emphasis today on the technical aspect of the game. He told us, “I’m simple minded. I don’t put a game on to learn how to throw a pitch.” Your thoughts?

I would agree with Vinny to a certain extent. I think when there’s a dramatic homerun, just let the crowd roar and enjoy the moment. No need for a bunch of analysis. Let’s just enjoy the excitement. But I also think there are fans who just can’t get enough inside information – which is the key.

A good analyst should periodically have moments where the analysis elicits a ‘Gee, I didn’t know that,’ response from the viewers. A moment where the viewers feel they’ve learned something new about the game.

This is where I think our business has changed over the years. On a telecast, the viewer expects to have a former player pointing out aspects of the game that aren’t so readily apparent to the average viewer. Viewers expect that now. I think the play-by-play man has to be keenly aware of that and clear out space for that former player-analyst to take viewers inside the game.

Joe Morgan was that guy for all those years on ESPN. Tim McCarver, Jim Palmer, Orel Hershiser, Mark Grant, Keith Hernandez and Ron Darling…all outstanding. One former player for whom I’m rather partial is Mike Krukow on Giants TV (and sometimes radio, too).

He’s one of the best I’ve ever worked with. Mostly he works with Duane Kuiper and they’re an exceptional team. But, when the game is carried over-the-air, I work the telecast with Krook. He not only gives you scouting reports on pitchers and hitters, but that night’s plate umpire, too. He not only has the knowledge, but he’s a genuine talent. He’s funny and he’s quick. There are a lot of strong analysts out there, but none better than Mike Krukow.’

Baseball is a lumbering game and seemingly becoming more so as the seasons progress. What suggestions do you have for the baseball fathers to speed up the game?

I have one major complaint with the Commissioner and his ideas for ‘speeding up the game’ or, better said, pace of play. Quit talking about it. it’s not the length of a game that’s key. But every time he brings it up, a lot of people think he’s really talking about the length of games.

When doing research for a book I came out with in 1998, I found an old Sporting News from 1956. The cover story was about the dilemma confronting baseball. What to do about all the long games, how to speed things up. Some said what I just said, it’s about all the down time when nothing happens or, you know, the pace of play. Kind of amazing they were discussing the same topic as a major issue 64 years ago. But, by all means, do something about it.

So what do you suggest?

When I saw an old kinescope of a game from the 50s, the thing that jumped out at me was that the hitter almost never left the batter’s box. Of course, there was a good reason for that. If the hitter started leaving the box, the pitcher would likely try and stick the next pitch in his ear. So clearly, in those days the hitter stayed in the box because he didn’t want to get drilled.

Don’t leave the box, you might get hurt. Now, hitters leave the box all the time, some after every pitch. I’m sure they often have good reasons for it. Maybe a hitting coach suggested it to them years before. Helps maintain concentration, focus. But this one thing, the constant leaving of the box, has added so much more down time, where nothing at all happens, than any other aspect of play. But, unlike years ago when the pitcher might get upset and drill you for it, that isn’t allowed today. Now, if a pitcher drills a hitter, he could be ejected, fined and suspended.

Don’t get me wrong, I’m happy they’ve done things to stem the tide of beanballs over the years. All the same, that used to be a major consideration for why a hitter stayed in the box. Do not leave the batter’s box, it could get you hurt.

My suggestion is simply this, if a hitter leaves the box, give him a warning. If he leaves it again, it’s an automatic strike. Period. 2-2 count, step out of the box for better concentration, focus…Stee-rike 3! Do not leave the batter’s box! It will cost you. As simple as that.

When people ask me how long I want to keep broadcasting baseball I always say, ‘Oh, not too much longer. I figure maybe another, oh…20-25 years and I’m outta here.’ When working a banquet with Giants fans in attendance, I’ve said something like ‘In the year 2045, Giants broadcasters Dave Flemming and Buster Posey will broadcast the Giants 46th home opener at Oracle Park—by the way, I would just have retired the year before…’

Seriously, I’ll have to have a team that still wants to hire me to broadcast their games. So, the time to retire may get decided for me somewhere along the way. If that happens, I’ll accept that it’s time.

For now, I still love the game. I love broadcasting the game, especially on radio. Even in August, when I’m tired and would really prefer to take a night off rather than head to the yard for yet another game, I find when I get to the park, the adrenaline starts to pump. I have to engage. I have to find out what’s going on. Get to the batting cage for the latest news, who’s in the lineup, who’s out—and how come? When the game starts, concentration is everything. Stay focused, be sharp. Exciting things will happen. Sometimes remarkable, spectacular things happen. And occasionally, history gets made. It’s fun and often even exhilarating.

Yet I know, just as with the great Vin Scully, one day it will be over and, if they haven’t already retired me, I’ll call it quits. In about, oh…20-25 years…”

If Miller does another 20 years, he will have broadcast (if you figure 2020 into the mix) 64 seasons. So he’ll have to do three more to get to Vin, and for all we know Jaime Jarrín will still be going! Great interview. I think the Giants broadcasters are terrific–the strongest overall broadcasting crew. And Miller has said that Vin once said, “Jon Miller is the best broadcaster in baseball … in his pay grade.” Whether Vin said that, I’m not sure, but it’s a good line. By the way, Doug Harvey, the greatest umpire I ever saw, at one… Read more »