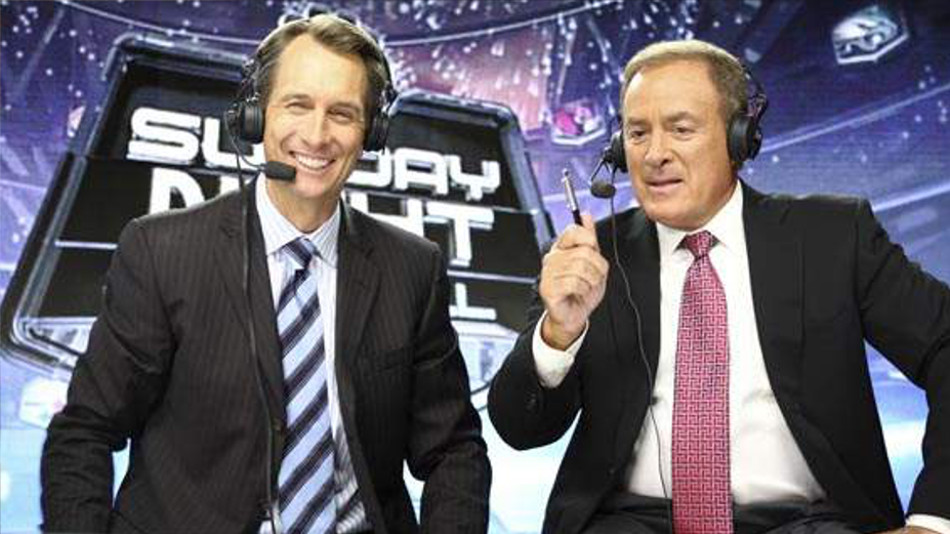 I was troubled by the nitpicking criticism of Al Michaels. If viewers didn’t know that Michaels was referring to the Los Angeles Angels and Detroit Lions, they’ve been hiding under a boulder for way too long. Critics should see the forest from the twigs.Those implying conspiracy have issues that transcend these pages.

Like exceptional athletes on the playing field,  great broadcasters make their jobs look easy. Those who extemporize for close to four hours and don’t err once are not announcers. They’re robots!

What I thought was humorous occurred a year or so ago.  Calling a basketball game, Jim Nantz had a player chasing a loose football. Now that made me chuckle and brought me closer to Nantz. It showed he’s human. Fans identify with  human foibles.

Technology will soon enable cameras to follow the action digitally not manually. In other words, cameramen will go the way of elevator operators  a couple generations ago.  They’ll be gone.

Are announcers next? Fans might have  voice prompted robots calling games. Do viewers want humans or robots?

Notwithstanding the commotion and euphoria  in the Eagles’ radio booth after the game , Merrill Reese took a minute to touchingly salute the late Bill Campbell. The longtime Philly broadcaster called  the team’s last NFL championship in 1960 on local radio. Back then, the Eagles defeated the Packers , 17-13. (The first Super Bowl wasn’t until 1967. ) Campbell announced games for the Sixers, Warriors (including Wilt’s 100 point game) and Phillies. Interesting to note that Jack Whitaker and Blaine Walsh called the same 1960 title game nationally on NBC Radio .

“I compared how quickly each play by play man reacted to the play and called it.  Reese of the Eagles and Bob Socci of the Pats were quite similar in describing Brady going back to pass, being rushed, stumbling etc., and then throwing deep toward the end zone.  But while Reese only described the long pass was (eventually) incomplete, the Pats announcer added ‘Gronk(owski) is at the goal line’ before declaring it incomplete which made Socci’s a better call in my view.”

Kip on final Super Bowl call of Kevin Harlan of Westwood One:

“Kevin did a very good job.  His final call of Brady’s Hail Mary Pass – ‘incomplete and zero zero on the clock, the game is over…’  You could actually visualize looking at the clock, really a first-rate description of a most exciting and memorable moment!”

Tidbits
Broadcasters who have excelled at both play-by-play and in the television studio:
Brent Musburger,  Bob Costas, Kevin Burkhardt, Mike Tirico, Chris Fowler and Steve Levy (interview with Levy coming up this week)
Ex NBA players who did NBA radio play-by-play: Michael Smith (Clippers) and the late Hot Rod Hundley (Jazz)
Ex NHL player who did NHL radio play-by-play: Randy Moller (Panthers)
Ex NFL players doing NFL radio play-by-play: Dave Logan (Broncos) and Jimmy Cefalo (Dolphins)
Trained lawyers who later made a living announcing – Howard Cosell, Jay Bilas, Gary Thorne, Len Elmore
Ex NFL players who did football play-by-play on network television– Pat Summerall and Frank Gifford. Talking of Gif, did you know that he did the play-by-play of the most controversial finish of any major basketball  championship game? ABC had the Olympics in 1972 in Munich and he called the maddening win by the Russians over the United States
Best ever simultaneous football punch on New York radio- Marty Glickman (1949-55 and 1961-72) on Giants and Merle Harmon (1964-72) on Jets. It didn’t come better.
Best in Bay Area Lon Simmons (1957-80) on 49ers and Bill King (1966-94) on Raiders

A good lesson for all announcers:
Before football completely leaves our consciousness – let me share a descriptive sentence that radio or TV play-by-play announcers should consider incorporating into their call of field goal attempts. Southern California based Isaac Lowenkron, doing a network game on radio between Oklahoma an Baylor bawled immediately after the ball was kicked “It clears the line. It’s on the way” On radio in particular, doing so adds another descriptive dot and dimension. It tells the audience that the kick wasn’t blocked.

Clippers’ acclaimed voice, Ralph Lawler once showed me that he had a real estate license in his wallet – Just in case, I suppose. It’s a fragile business. At this point, Lawler is about to turn 80. He’s had a glorious career, is still sharp and will hang up the cleats when he pleases. Don’t think he’ll need to ever peddle houses.

Did you ever wonder what Vin Scully’s style would sound like doing basketball? Listen to Mike Parker who calls Oregon State games. He threads little stories into his broadcasts and his voice inflections are different from the  commoditized on-air pack. That is – until he gets up to gesticulate and emote through entertaining body language. I don’t think that Vin would sign off on rooting and gesturing.

Noteworthy
NBC’s Olympic voice Mike Tirico, a New Yorker from Queens, interned under a New York broadcast mainstay, Ed Ingles. In the pre-digital age and before the birth of all-sports radio, Ingles was the sports director of WCBS Radio where he pioneered the economized sports report, used by so many sports radio update personnel today. Ingles somehow crammed in scores and sports news in  minimally allotted time. When fans needed their sports fill, Ed was a steady answer – every morning. He’s now 85 and still active. Ed just recently lost his son Kevin, a broadcast engineer on remote broadcasts for ESPN and other outlets. Condolences to Ed, Margaret and the Ingles family.

He doesn’t talk about it much but the radio play caller of Florida State football and basketball, Gene Deckerhoff, attended the University of Florida. Deckerhoff also does the Tampa Bay Bucs. Gene has an unmistakably husky voice and when his teams are behind his enthusiasm doesn’t temper at all. One fan told me that if listeners didn’t know the score when turning on the radio, they’d never know it until Gene gives it. Whether his team is ahead or behind, Gene’s voice is always upbeat.

Jack Whitaker – When we talked this past fall, he told me that when he was doing television football and traveling with the Giants, he spent time with the team’s radio voice, Marty Glickman. Jack said, “I don’t remember talking much football with Marty. He was an Olympian track star and we talked a lot about track.” Whitaker is and Glickman was a renaissance man.

Paul Olden, Jerry Baker and Paul Porter have something interesting in common. One-time play-by-play announcers, they’re now on the public-address microphone. Olden held many positions, but none very long. He did play-by-play for the New York Jets, New York Yankees, Tampa Bay Devil Rays and other teams. Since 2009, Olden has been the stadium announcer for the Yankees. Baker, the longtime and original voice of the Indiana Pacers is on the PA at Bankers Life Fieldhouse. Porter, who actually did one season of Cleveland Cavaliers basketball on radio has been the PA man for the Orlando Magic ever since the team’s birth in 1989.

Tim Ryan (not to be confused with the former NFLer who does color for 49ers radio), a longtime, versatile and talented broadcaster wrote a book recently that I’m now reading. On Someone Else’s Nickel. I’m planning a Q&A with him soon. Tim’s a well rounded broadcaster who covered just about every sport you can identify, other than baseball.

Where are they now

Jimmy Dykes, the friendly and southern accented former ESPN hoops color commentator is back calling games for the SEC Network. He left ESPN in 2014 to coach the women’s basketball team at his alma mater Arkansas but wasn’t renewed after three seasons.

Bob Davis— a broadcast institution in Kansas, former longtime voice of the Jayhawks and radio announcer for the Kansas City Royals retired a couple of years ago to spend time with his ailing wife Linda who’s suffering from Parkinson’s.
​
Davis grew up listening to Max Falkenstein who called KU games for 60 years. Late in Falkenstein’s Kansas broadcast tenure, he moved over a seat from play-by-play  to color when Davis was hired as KU’s prime voice. The legendary Falkenstein still lives in Lawrence. He turns 94 this April. When a free throw shooter took his time, Max would say “He’s a deliberate foul shooter.”

​Falkenstein has been around long enough to have met Dr. James Naismith, KU’s first coach and the man given credited for inventing the great game of basketball. Max also knew Phog Allen for whom the Kansas fieldhouse is named. Falkenstein called one of the most gripping NCAA title games of all time, the triple overtime win by Frank McGuire’s North Carolina team over KU in 1957. The Jayhawks were led by none other than Wilt Chamberlain.
Falkenstein was so popular in Kansas that he was hired at one point  by Douglas County Bank in a public relations and ceremonial capacity.
Davis also listened to the late Merle Harman and Monte Moore on Kansas City A’s baseball. Merle was later the voice of the Jets on New York’s WABC Radio. Merle passed in 2009. Moore is living in California after years as the Voice of the A’s. (Story on Monte coming up soon.)
​
Bob Gamere, He called Holy Cross basketball and in 1970 the New York Yankees. It was widely agreed that he wasn’t very good and wasn’t renewed after one season in the Bronx. He returned to New England where he had a vibrant television career including a long stretch of hosting Candlepins for Cash, a program on which contestants bowled for cash. He also did college hockey, Harvard football  and was a Boston television anchor.

Sadly,he got himself in trouble with the law for assault and sexual harassment of a man and later for child pornography. He was eventually sentenced to five years in federal prison and was released after 4 ½ years in 2014.

Always interesting. I worked with Max Falkenstien for 12 years doing Ku and K-State sports before left radio to do Big 8 basketball on tv. Look forward to your story on Monte Moore. A friend for more than 50 years

You forgot about former NFL player Steve Raible, who is pxp man for the Seattle Seahawks. He was a receiver in the late 70’s…he also anchors news for Seattle CBS station

Good catch! Thanks for reading. Correction has been made on the site. Raible played at Georgia Tech and was the Seahawks’ longtime color man before moving over a seat.

Really interesting stuff! Remember that Russ Hodges was a trained lawyer, as was Mel Allen! On Vin: Bob Edwards once said he was surprised when Red Barber praised Howard Cosell, saying that Cosell did what he had to do to make it in the business. I think Vin understands that rooting works for some broadcasters, just not for him. And yet, when the Dodgers got to LA, Walter O’Malley suggested that Vin and Jerry Doggett root for the team, since that’s what local announcers did (Bob Kelley did the Rams and PCL Angels, and my dad remembers him saying things… Read more »