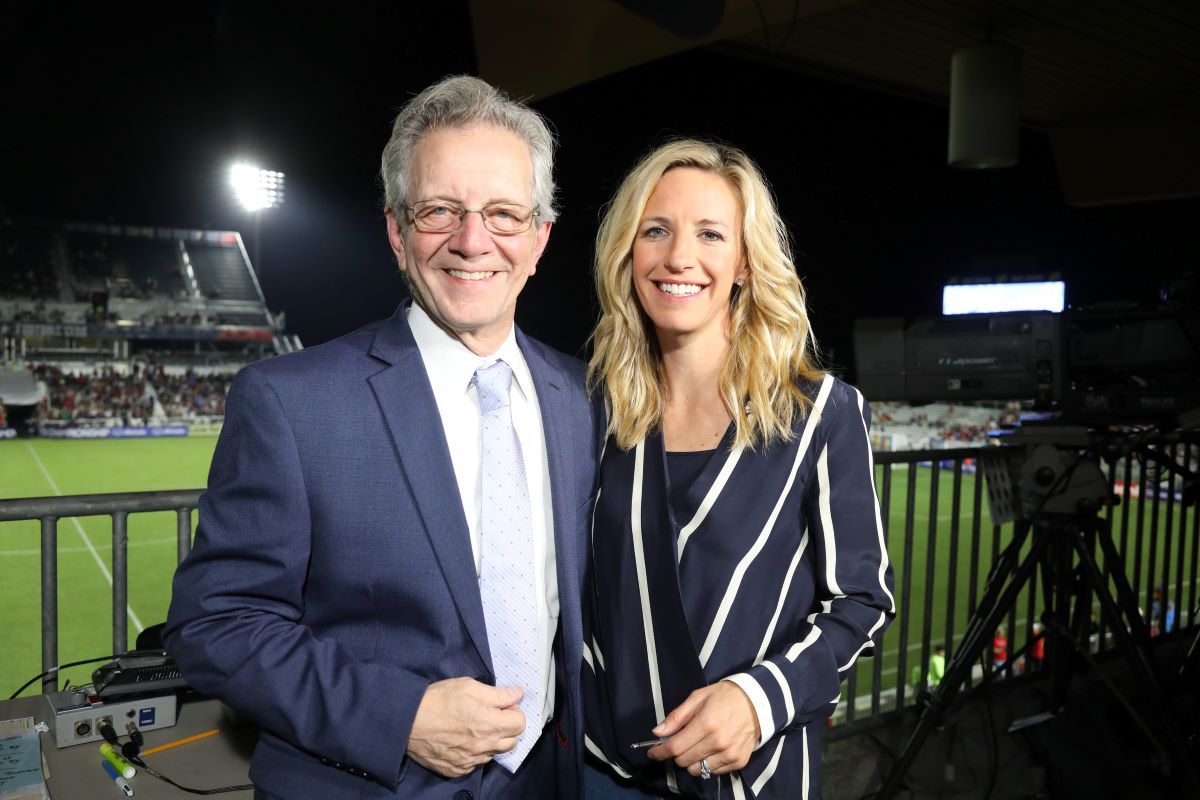 Think soccer, America and television and there’s one name that immediately comes to mind. Among broadcasters, there aren’t many who’ve been around the world game longer than JP Dellacamera. Not just matches, he’s presided over matches at the highest of levels!

While still trailing much of the world in popularity, soccer continues to grow in the U.S. And you might credit JP and the on-air passion he brings to the booth, for the swelling interest that the game is enjoying across the landscape.

JP is an American sportscaster whose voice has been welcomed into the homes of millions of soccer fans for nearly 40 years. Since his switch from covering hockey in 1982, JP has called an astounding 15 World Cups (9 Men’s and 6 Women’s) and three Olympic soccer tournaments. He’s also a veteran voice of MLS, having worked for the Columbus Crew and New York Red Bulls. JP’s currently is in his 11th season as the original TV voice of the Philadelphia Union.

His longevity in the U.S. is unparalleled. For his outstanding work and distinguished career, Dellacamera (l) has won the prestigious Colin Jose Media Award which was presented to him at the National Soccer Hall of Fame in 2018. Having his wife, daughters, son-in-law, and grandson there to share the honor with him made it one of the most special moments of his career, on or off the soccer pitch. Recently, Dellacamera was inducted into the Connecticut Soccer Hall of Fame, another distinction that ties him inextricably to the sport he loves.

Working with some of the biggest sports networks in the game, ESPN, ABC, NBC, TNT and Fox, Dellacamera has been a part of U.S. Soccer’s most monumental matches and memorable moments.

We recently reviewed his career and the special experiences that soccer has given him.

Who were some of the voices you listened to early on that inspired you to become a sportscaster, soccer or another sport?

In my high school days, growing up in the Boston area, Curt Gowdy was the big broadcast name. He did baseball and football play-by-play. Don Earle was, at that time, the voice of the Boston Bruins. They were probably the first two early voices I heard that made me think seriously about a future in broadcasting. Back then, hopeful future broadcasters wanted to be the next Gowdy. Fast forward to today, when I am asked to list my broadcasting influences, I name three, Al Michaels, Bob Costas, and Brent Musburger in no particular order. I think I have learned little things from each of them. Musburger was the announcer who taught me about the drama of the game. How to lay out after big moments and let the pictures tell the story. Say what you need to say in the most concise way that you can.

You started your career not on the pitch, but on the ice. What originally drew you to hockey?

When I grew up in the Boston area, the Patriots didn’t win, the Red Sox were popular but also didn’t win, the Celtics won but had a hard time filling the old Boston Garden. The Bruins sold out every game, and every game home and away was televised, including those on the west coast. I got to watch the great Bobby Orr, Phil Esposito and so many others. It was easy at that time to fall in love with the Bruins and the NHL. Around that time is when I felt like I wanted to be an NHL broadcaster. This was long before I had an interest in soccer.

Why the transition from hockey to soccer? Did you listen to anyone on the soccer side that influenced your style?

I became tired of the long years and bus rides in minor league hockey while awaiting my chance to become an NHL announcer. There were far fewer teams then and far less opportunity. I came close to a couple of NHL jobs. Ironically, several years after not looking, I was hired as the TV Voice of the Atlanta Thrashers and did their games five years. Back to the reason for the switch, I was working for a minor league hockey team in Erie, Pennsylvania that was run by the famed DeBartolos who also owned an indoor soccer team, The Pittsburgh Spirit in the Major Indoor Soccer League. I made the switch in 1982, ditching bus rides for airplane travel and smaller markets for bigger ones. I was able to call games on KDKA Television. To me, indoor soccer was like hockey on grass, so it was easy for me to make the switch.

What would you say sets you apart from other American soccer commentators?

The only thing I can think of is the overall body of work. I’ve proudly called 15 World Cups (men and women) all while networks change and World Cups move. You have to have some luck in this, so I never discount that element. We have a lot of talented American soccer commentators who, quite frankly, don’t get the credit that they deserve.

On that same note, what about soccer makes it so challenging for many multi-sports commentators, like Gus Johnson or Dave O’Brien, to have long-term success calling this sport?

Gus or Dave would better answer the challenges they faced doing soccer for the first time. Both are very talented announcers in multiple sports, but they were thrown into the deep end of the pool at a high level. Had they continued down the soccer path, they might have excelled. There are three sports that I have done at network level, soccer, hockey and basketball. If you asked me to do golf, football, or baseball I would struggle for sure.

When you do play-by-play for the World Cup, you are doing so live from the stadium. But now, in this Covid-19 era, the new normal will be calling events from the studio, watching on monitors. What are some quirks about being in studio rather than in stadium that sports announcers and listeners alike will have to adjust to? Is soccer easier than other sports to call off a monitor?

First of all, I have probably called more games off the monitor in my career than most people have. Years ago, I worked at ESPN International where I did a minimum of 200 events a year for more than ten years. A majority of these games were called off the monitor. We called UEFA Champions League games there as well as some World Cup matches. I also did three Olympics for NBC, most off monitors. It has its good and bad points. The bad is that you can’t see the entire field as you would being at a stadium.

The good is that it forces you to be able to call only what you can see. It really teaches you to focus on that monitor. When you think about it, it’s the only time in your broadcast career where you are seeing the exact same TV picture as viewers are at home. I won’t say soccer is easier, but would say it’s less challenging. I would think that the NHL would be harder to call off of a monitor because of the speed of play. Also, you have players changing on the fly and you may not always know who is on the ice at a specific time.

Can you pinpoint one career-defining moment for you that felt like, “I’ve made it?”

Probably broadcasting the 1999 Women’s World Cup. At that time, it was the biggest women’s sporting event in our history and the most watched soccer game in our country’s history. Calling the final on ABC Sports will always be a highlight for me.

Do you have an all-time favorite sports moment or game that you have called?

For sure that 1999 Women’s World Cup final, along with the 1989 World Cup Qualifier where our USA men’s team defeated Trinidad and Tobago. That win for the U.S. Qualified them for their first World Cup in 40 years. And calling the last two Women’s World Cups in 2015 and 2019 on Fox is a more recent special memory.

What do you see for the future of soccer in the U.S.? For club? For country?

I see a bright future for both club and country. In a few years, MLS will be up to 30 teams. Who knows if they will add more, but for sure the league has come a long way since its inception in 1996. For our country, we are seeing some bright young talent on the men’s side with Pulisic, Adams, McKennie, Sargent, Reyna, and so many others. I will look forward to watching them grow both individually and as a team. On the women’s side, our team has won the last two Women’s World Cups and while there are so many veterans on the squad, there are many great young players hoping to get their chance to play.

Laura Nicks is a senior at the University of Wisconsin-Madison studying Sports Marketing and Communications. Originally from Chicago, IL, Nicks hopes to continue her passion for sports professionally, eventually working for an international soccer club or FA.