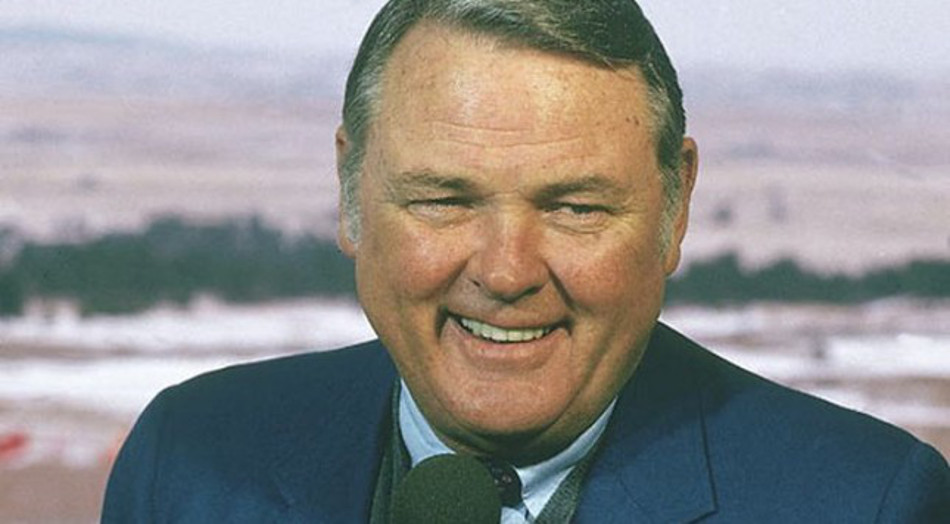 Inextricably identified with the college game, Jackson loved all football, period! Now this self-proclaimed ‘good ‘ol boy’ passes – just when he would have felt in heaven anyhow, when football’s scent was strongest; the week of the national collegiate title game and on the eve of a consuming weekend of NFL playoffs.

A baritone of the south, Jackson presided over the first season of ABC’s Monday Night football in 1970. Doing so, he helped make the NFL a primetime network behemoth. It was well before the first national cable network reached a fraction of the American population and when ninety percent of primetime television viewers were watching one of the three existing networks, ABC, NBC or CBS.

In the 1980s, Jackson covered the United States Football League. Yes, the USFL, a league that included the New York Generals, owned by a New York realtor named Donald Trump.

Still, Keith Jackson will always be the first broadcaster identified with college football.

When you think of other announcers who defined their sports on national television, you would likely include Vin Scully for baseball. (Others have announced the game longer on network television, yet Vin’s indelible stamp on baseball broadcasting carries an incessant wave). Interchangeable bonds also include Al Michaels with pro football, Marv Albert with pro basketball, Mike Emrick with hockey, Jim Nantz with golf, Dick Enberg with both college basketball and tennis.

How committed was Jackson to college football? On Saturday afternoon, October 7, 1978, ABC chartered him from Dallas to New York after he signed off on the annual Texas-Oklahoma tussle. Talk about no margin for error. Just hours after the football game, Jackson was due in the Bronx for a Yankees-Royals playoff broadcast. When the private plane landed, a siren-shrieking and lights-flashing ambulance rushed this unhurried southerner to the Bronx through cacophonous streets.

Why the ordeal? “I get regretful pangs on Saturdays when I’m not working a college game” Keith said then.

Jackson was fine on baseball and in fact one of ABC’s announcers in 1965 who called baseball’s first regular season on a full television network. But after covering three World Series and the memorable Mets-Astros playoff game #6 in 1986, Jackson never attended a baseball game again. Baseball was a job, football was his passion.

On October 18, 1977, Jackson’s call of Reggie Jackson’s third homerun in game #6 of the World Series was interrupted in midsentence by the bombastic Howard Cosell. It didn’t sit well with him; neither did color commentators like Dick Vitale who would usurp broadcasts. Jackson always felt that play-by-play announcers should take the lead step. Years after his baseball assignments ended in the 1980s, he also gave up basketball.

Time in grade, his fashionable on-air style and a hands-off government helped Jackson’s football popularity balloon. When ABC won the exclusive NCAA rights in 1966, he was first assigned one of the lead-in regional games and by 1972, he replaced Chris Schenkel on the pervasive national broadcast. For the next twelve years, until the Supreme Court banned the NCAA from selling its broadcast rights exclusively to one network, Jackson’s national game was the only one seen nationwide in that time slot. (in complete contrast to today when scores of games are carried in the same timeslot.)

The confluence of Jackson’s exclusive timeslot and a stentorian replete with homespun phrases, made him an enormously popular Fall fixture.

Jackson was a broadcaster’s broadcaster. Assign him to any sport or even news and he did it masterfully. He reported from some ten Olympics, did many events for Wide World of Sports and was the principal commentator for Superstars in the 1970s and 80s. In 1974 in Toronto, he witnessed Evil Knievel’s death-defying but successful jump at Exhibition Stadium.

One night in 1965, when he landed home in Los Angeles from a baseball assignment in St. Louis, ABC asked him to cover the race riots in Watts. Keith immediately called his baseball broadcast partner, Jackie Robinson, and said, “Jackie, where are you when I need you?”

When Keith Jackson and I talked some ten years ago, I asked him for the most important tip he gives budding sports announcers. “I tell each one to stop the irresistible temptation of resorting to two words when engaging in conversation. The two words are ‘You know.’”

Great website! Jackson was such a versatile announcer who also called the NBA and college basketball. I spotted a few errors in the writeup… (1) He replaced Schenkel as the lead college FB announcer in 1974, not 1972…. and (2) You said that Jackson never attended a baseball game after 1986. But he definitely attended a 2003 game in Oakland as he was in the ESPN2 booth assisting with the call of the July 2 Mariners-Athletics game as part of the “Living Legends” series that season.

Thanks. I was able to find footage of games in ’73 and’74 -including USC-ND in ’74 and Schenkel indeed presided. Keith himself told me he never attended a baseball game again—maybe he meant as a fan. In my research for the Howard Cosell series, I came to learn of the mixed relationship Jackson had with Cosell. On the one hand, Howard expressed disappointment when Jackson was taken off MNF after its first season. But earlier in Las Vegas – covering an Ali fight- Cosell saw Jackson interview Ali’s manager Angelo Dundee. Jackson who made his early mark in Seattle was… Read more »