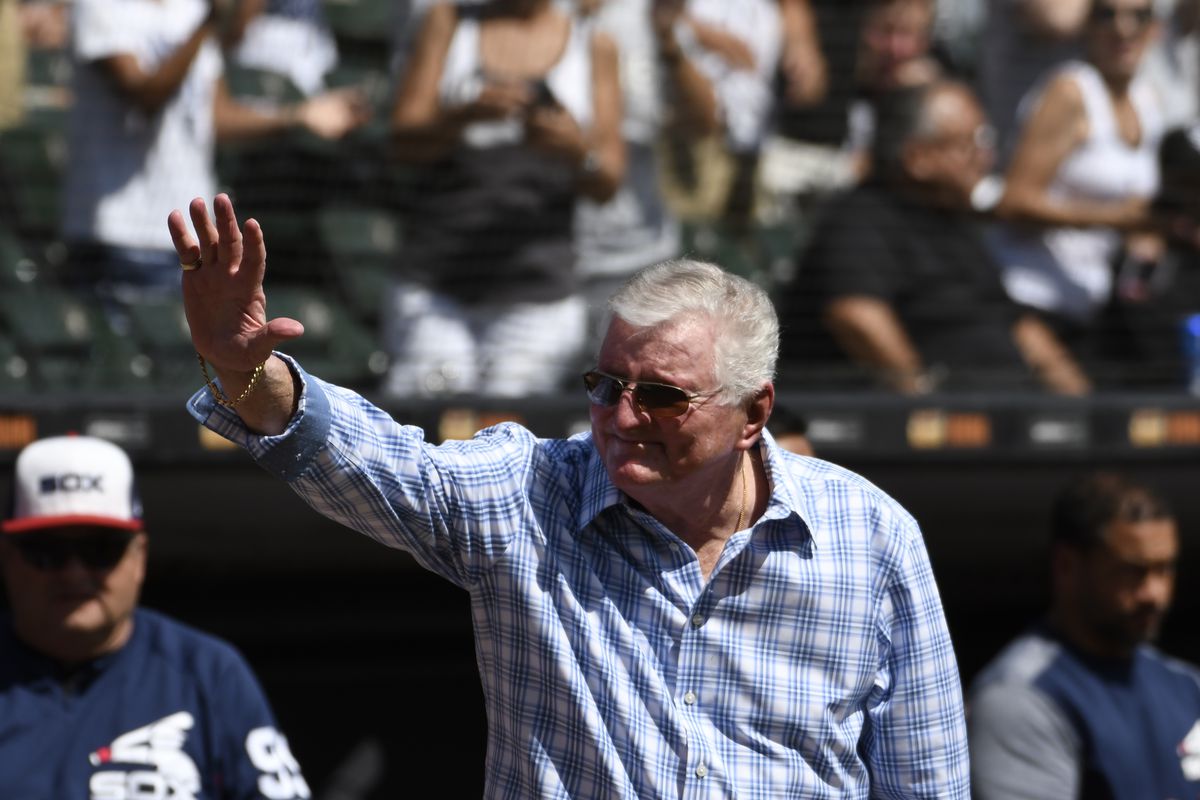 On July 24, Ken Harrelson will receive the 2020 National Baseball Hall of Fame and Museum’s Ford C. Frick Award for broadcast excellence: perhaps radio/television’s most prestigious single-sport honor. “Hawk” was chosen last year, but the ceremony was deferred  by Covid. The delay affords more time to hail his five-decade TV stint with the Red Sox, Yankees, and above all White Sox—showing that with baseball, fun should not be a four-letter word.

Crosstown Cubs radio Voice Vince Lloyd often said, “Come on, let’s score a run.” For a quarter-century, the Pirates’ Bob Prince bellowed, “We had ’em all the way!” Many mic men reference “our side,” “home team,” and “us.” From 1975 through his 2018 retirement, Hawk was their kind of guy.

Mel Allen hated being called a homer, saying, “I’m partisan, not prejudiced.” By any definition, Hawk had been a hoot to hear. The White Sox were the “good guys,” Ken affirmed of “the black shirts. Yes! You can put it [a Pale Hose run] on the board!”

My fondness for Harrelson is more typical of Joe Average than the average elite, who disliked him beating his own drum. Admittedly, Hawk was not for everyone, especially those who think baseball /TV should be as dull as dishwater. Most, though, prized his color, notably in the years Ken was the greatest draw the White Sox had.

In 1951, Hawk, 10, born in Woodruff, South Carolina, moved to Savannah. Mother Jesse, a single parent, “didn’t make much in a week,” he said, living in a tiny house “with holes in the screens and no air-conditioning.” The high school All-American fancied “a [hoops] scholarship with Kentucky,” instead playing four sports in military school. “Mama thought I’d make more money with baseball. We compromised.  I played baseball.”

In 1959, Kansas City gave the self-styled “mama’s boy” a $30,000 bonus. Two years later Charles O. Finley bought the Athletics, Ken joining them in 1963. On August 3, 1967, they flew commercial from Boston to KC, Finley “such a skinflint he spread us three across in coach.” Pitcher Lew Krausse allegedly became rowdy, drawing Finley’s $500 fine. Skipper Alvin Dark refused to enforce a suspension, Charlie O. axing him. Next, he asked the pro-Krausse Hawk if Ken wanted to be released, not dealt. No, Ken said, “needing my $12,000 salary.” Finally, Finley had Hawk’s roommate intercede. “As of this moment,” Mike Hershberger told him, “you’re no longer a member of the green and gold.”

Freed, Harrelson left KC ‘s loony bin with a nickname and niche. The A’s’ Dick Howser gave Harrelson his alter idem for a nose broken in six places. Later it became Ken’s alter ego: “Inside, I was quiet, cautious. Hawk was my public self. I’d be in the on-deck circle, saying, ‘Kenny, get out of the way and let Hawk take charge.’” He also practiced in the field. “I’d be at first base or the outfield, Catfish Hunter fanned a guy, and I’d say, ‘Get that next SOB up there.’” His niche made history: Finley’s release made Ken baseball’s first free agent. 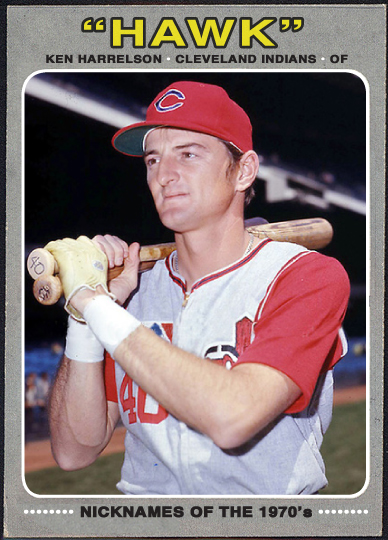 Promptly the Red Sox and White Sox phoned, Chicago’s warning of “a bidding war” turning on Ken’s light. “Whoever gets you will win the pennant,” Dark advised, “and you’re going to get at least $150,000. Play the field.” Heeding him, Hawk “got exactly that,” signing with Boston but hitting .173. “We won the pennant despite, not because of me,” he laughed, popularizing the one-handed catch. “Don’t drop one!” Sox manager Dick Williams pled. Mama’s boy said he was being smart: “With bad hands like mine, one hand is better than two.”

In 1967, teammate Carl Yastrzemski entered New England lore with a Triple Crown transcendent AL flag-winning year. That offseason No. 8 became Ken’s fixation. “A lot of athletes pick out one guy for motivation. All winter I worked my butt off to beat Yaz and in ’68 had the best year of my life”—35 home runs and league-high 109 RBI. Many can still hear Voice Ken Coleman saying, “Harrelson jumps on a [Sam] McDowell pitch,” “Harrelson,  really on a tear,” or “It’s home run—high, wide, and handsome.”

One day around this time, the right-handed Hawk, expecting to sit v. a Yanks righty starter, played golf, got a blister, arrived to find a lefty pitching, and said, “Guess who’s in the lineup? Me.” Ken located his golf glove, made it a batting glove, and homered twice. Next day each Bomber wore one, Mickey Mantle having the clubhouse manager buy in bulk. The Hall of Fame credits Harrelson for introducing the glove in the regular season.

In 1968, Ken unveiled his other self. “Fans wanted a character, so I gave ‘em flair, bigger than life”—love beads, bell bottoms, a cowboy hat—the Hawk. “You know how it is,” he said. “A gentleman meets a lady. Suddenly, sparks fly—’68, my Utopia.” Ultimately, he had 150 pairs of pants. “Remember the Nehru suit?” Harrelson bought 15. “Before I wrote five, they were out of style.”

In 1969, baseball’s Beau Brummel was dealt to Cleveland for needed Red Sox pitching,  Fenway Park switchboards jammed. He wept: “Baseball was never fun again.” In 1970 Ken broke a leg, hit .199 next year, retired, and took up golf. By November 1974, “I’d thought about golf for months and that night decided to give it up. Golf ain’t cutting it.”

That night at 3 a.m., Hawk, panicking, awoke: “What am I gonna’ do?” By quirk, next morning Boston GM Dick O’Donnell called to offer the same TV color that Ken had declined a year before to focus on the links—“how amazing,” said Harrelson, “when he didn’t know I was shucking golf.” Working, improving, he learned what Red Sox VP, Administration Gene Kirby termed baseball’s “ patter.” “Some guys coast on their names. Others numb you with statistics,” Hawk said, spurning each.

From Sox play-by-play man Dick Stockton, he learned “to be a perfectionist.” The Sporting News’ Jack Craig evoked his “inside phrases tumbling out of that sweet Southern drawl.”  Before 1975, Ken had never described a pitch. UHF penetration was erratic. In addition, to reach rural New England the Sox relied on radio: Ned Martin and Jim Woods phenomenally popular. Harrelson never bemoaned the pecking order. “TV was second banana,” he said, trying through 1981 to climb Boston’s tree.

That year Sox catcher-turned-free-agent Carlton Fisk bolted to Comiskey Park. Next year Hawk joined him, the White Sox laying gifts at his feet to fuel a new pay cable channel. Harrelson succeeded Cubs-bound Harry Caray—the only Voice he could hear in 1950s Savannah on KMOX St. Louis. “I learned from listening,” Ken said, “learning the most from [1980s White Sox Voice Don] Drysdale, arguing on and off the air.” Hawk once stopped his car, yelling, “Let’s do it, man.” Later he sweated what-might-have-been: “Big D would’a drilled me.”

In the 1980s, Howard Cosell—to Hawk, “Coach”—reportedly asked Hawk to join ABC’s Monday Night Baseball. “No!” he replied. “Why?” said Howard. Ken: “Because you don’t know what the hell you’re talking about.” Cosell: “Don’t tell anybody.” Instead, Harrelson became a two-time Illinois Sportscaster of the Year and five-time Emmy honoree in his 33-year Pale Hose tenure.  His 1983 Sox won the AL West. In 1985, Tom Seaver won his three hundredth game.  “Two outs! Fans come to their feet,” Hawk said. “The biggest media representation in Yankee Stadium in years! High to left, playable! Red Nichols camps underneath it! History!”

Hawk spent a trying 1986 as White Sox GM—“Why’d I try it? Mama said, ‘Son, you’re a good kid and I love you, but you ain’t the smartest thing I ever saw.’” He then did Yanks SportsChannel, warming to the Apple after thinking it “too big-city for a small-town boy.’” In 1973, George Steinbrenner had bought the club, he and Ken “arguing constantly, but he changed my view of New York.” Its view of him was murkier, Harrelson dispatched after 1987-88. From 1984-89, he also did NBC’s backup Game of the Week, a year later retrieving his kind of town.

In 1990, Comiskey Park bid goodbye. Next year a new Comiskey rose. Missing was the old joint’s grace, caprice, and open arches. The Cubs had Wrigley Field. The Sox had Harrelson: reading notes, citing birthdays, and saying “Sit back. Relax and strap it down” to his audience, who knew Hawkspeak by rote: “He gone!” or “Grab some bench!” defined a rival strikeout; “a can of corn,” an easy fly”; “duck snorts,“ a blooper: and “a chopper-two hopper,” a two-hop ground ball.

“Mercy!” Harrelson would hail a play, using Martin’s famous phrase. Some men in blue felt none for him, Commissioner Bud Selig scolding Ken after the latter tooted, “They have got some guys in this league that no business umpiring!” In 2001, new Comiskey Park a.k.a. today’s Guaranteed Rate Field had a face lift: green seats, an ivy-covered hitter’s backdrop, and a less vertigo upper deck. If not Wrigley, no longer was it a K-Mart without the charm.

The Big Guy didn’t need a lift. “Let the home team win!” he boomed. In 2005, the Sox finally won their first world title since 1917. Ken once said, “I hope to be broadcasting the White Sox until I die.” In 2009, he aired perhaps the next-best thing, capping the final out of Sox pitcher Mark Buehrle’s perfect game: “Yes! Yes! Yes! Yes! Yes! History!” This month, Harrelson will enter Cooperstown. Put that on the board.

CURT SMITH is the author of eighteen books, including the forthcoming Memories from the Microphone (August 5, Mango Publishing).