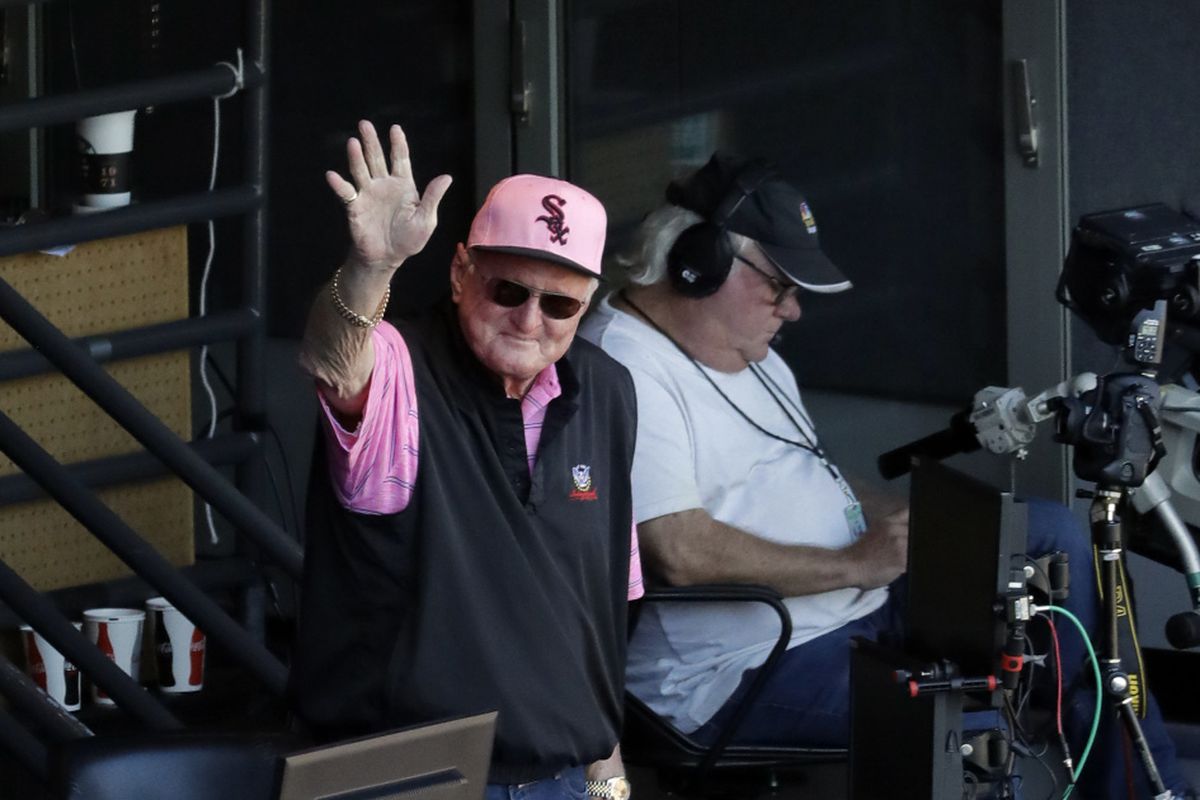 Harrelson, in September, 2018, as he wound down his broadcast career

In the second half of our conversation with Ken Harrelson, we covered lots of ground, the game’s trends, player make-up, personalities, analytics, political correctness and more. Hawk also delved into his 42 years as an MLB broadcaster, having spent seven years in Boston, 33 in Chicago with the White Sox and two in New York with the Yankees. The former Major Leaguer was also a backup announcer for NBC’s Game of the Week.

In the booth through the years, Harrelson had some colorful and accomplished partners, voices like Don Drysdale, Ned Martin, Steve Stone, Phil Rizzuto and Dick Stockton.

Hawk started in baseball in the mid 1960s, breaking in as a player with the old Kansas City A’s. He was fully active through the end of last season when he retired as the television Voice of the White Sox. That’s more than a half-century in Major League Baseball.

On air, Harrelson was an unabashed rooter who used homespun phrases that he developed while playing in the outfield.  Hawk says he does miss the day to day activity: “Retirement sucks, but I’m spending more time with my grand-kids who are good athletes. I watch them play basketball and baseball. It’s fun.”

Another thing that Ken wishes he could do more of is play golf consistently. A fantastic all-around athlete, the South Carolina native was excellent on the links. One summer, at the urging of Jack Nicklaus, he tried to make the cut at the British Open and missed by just one stroke.

“I had very strong hands. But through the years I wore them out. So I can’t play as much as I did. And if you don’t play the game regularly, you lose interest.” He was asked about whether Tiger Woods’ win at the Masters was the greatest individual sports feat he witnessed. “No. Remember Al Michaels’ words? ‘Do you believe in miracles?’ That was it.” Hawk was obviously referencing the win by the American hockey team over the powerful Soviets at the 1980 Winter Olympics. He added, “Al Michaels and Dick Stockton are two guys who can broadcast any sport!”

After his final White Sox broadcast last September, Harrelson told the Chicago Sun-Times: “‘Hawk’s gone,’  is what I want on my grave.” He took it a step further, telling the newspaper, “I would want, ‘Here lies a man who adored his family, here lies a man who adored his White Sox, and he gone.’” (‘Hawk’s gone’ is a derivative of one of the homespun phrases he used on-air for decades, ‘He gone.’)

Growing up in Savannah, Georgia, who did you listen to, calling baseball games?

We got KMOX at night, so I would go to bed at night listening to Harry Caray and Jack Buck. But I didn’t try to emulate anyone when I started broadcasting games myself.

At what point, did you begin thinking about broadcasting baseball?

When I was playing the outfield, I would make believe that I was calling the game. Between pitches, I’d start developing some of the phrases I ended up using for years, “He gone!” or “Grab some bench.”

When you started on-air, did anyone reach out to you to offer advice?

My first broadcast assignment was with the Red Sox. I had a chance to work with Dick Stockton. He could do anything, any sport, and he did. I learned from him and also from a fellow who was beloved in Boston, Ned Martin. Gene Kirby, himself a broadcaster earlier in his career, was in the front office and he was very helpful to me too. But the two biggest tips I got were from both Curt Gowdy and Howard Cosell. They both asked to see me when I started out. They both were very encouraging and shared two identical suggestions. One, be yourself and two, don’t try to please everyone.

Years later, when I would hear from aspiring broadcasters and their letters were well written, I’d invite them up to the booth and give them the same advice.

Jason Benetti is your successor with the White Sox. How’s he doing?

He’s good now and he will be terrific. He keeps getting better and better. We text each other. I’ll critique him a bit every now and then. I told him, ‘You’re captain of the ship now. Get the most out of your analyst, Steve Stone.’

There’s something else I’ll add. I think that the open at the start of the telecast should be geared for the color man. I see play-by-play guys dominate the open. It’s wrong.

How did you approach the telecast?

I had an opportunity to work with a great director in Chicago, Jim Angiu. I would say, ‘Jimmy, let it fly and I’ll follow you.’ I didn’t write things down on a legal pad because you then feel compelled to get the information in. Don’t let notes dictate content. The game should.

Lots of announcers in baseball won’t shut up. There’s constant chatter. Dead-air is part of the game. Baseball demands it.

Every game is different. Each has its own personality. Let that personality come to you, not the other way around.

I listened to lots of radio on my way home from the ballpark. It was better than an hour and a half commute. I like Tom Hamilton in Cleveland and love Eric Nadel in Texas. There are others too. Nadel gave one of the best acceptance speeches at the Hall when he got the Frick Award. A chunk of it was in Spanish. There are so many Latin players in the game today, it was perfect?

The first thing you have to remember is that people don’t tune-in to hear the announcer. They want to follow the game. There are two exceptions, Vin Scully and my man in Detroit, Ernie Harwell.

Many guys can do a 1-0 or 2-1 game. The challenge is the 9-0 game, the runaways. That’s where Scully excelled. He was a masterful storyteller.

The best compliment I’d get was, ‘You’re a storyteller who does play-by-play.’

Baseball is a radio game. I heard lots of him driving home on SiriusXM, tuning him in on West Coast games. I drove 100 miles back to South Bend after ballgames and before you knew it, listening to Vin in the car, I’d be pulling into my driveway. Another guy I like is Oakland’s Ray Fosse.

He was my all-time favorite partner. Don was the most comprehensive. He knew all aspects of the game and can articulate them. We would argue a lot in the booth. We almost got into it a couple times. But he was great. Do you know what Drysdale had for breakfast? Liver and onions and two Heinekens. I kid you not.

I stay away from politics on-air. I have my own opinions but I keep them to myself. I did go on record though about Colin Kaepernick. What he did was disrespectful of the flag and I had a right to say it. In fact, I said it before Vin Scully. I won’t watch another NFL game.

Experiences, youth, culture and the future of the game:

Tell me about your interaction and experience with George Steinbrenner.

When I was the General Manager of the White Sox, we met with George in St. Louis at the 1985 World Series. Our owner Jerry Reinsdorf was with me as was Eddie Einhorn. We’re sitting in a hotel room and George proposed a trade to Jerry. I stopped him and said, ‘George, Jerry owns the club. I’m making the deals. You want to propose trades, talk with me. I run the baseball operation.’ Jerry shrugged his shoulders, somewhat apologetically, like yes, deal with Hawk. That set the tone for my relationship with George.

The following spring, he called me at home at 1am. I said, ‘George, Don’t ever wake up my family again. You want to talk business, call me in the office tomorrow. He did.’

After serving in the White Sox front office, he called and said, ‘Come to New York to work for me.’ I said, ‘I’ll come up and work with you, not for you.’ I did and broadcast the Yankees games for a couple seasons. Truth is that George and I got along just fine.

The youth in the game?

There are great and talented players, more so today than ever before. These kids today can do things we didn’t think about, but it doesn’t mean that they know how to play the game. They’ve got to learn.

The game is 40% Latin. You have to get Latin managers. Others should take Spanish courses to learn the language.

Baseball isn’t the place for elevated analytics. Guys who’ve never been on the field are sending down proposed line-ups based on numbers.

Managers have had enough of it. I think it will run its course. Think of the Latin players. They weren’t inundated with swing angles. They see the ball, they jump all over it.

Analytics also take out the style-like quality of the game. Baseball is a kids’ game. Analytics take away the child-like enthusiasm. Look what happened in the World Series. Dodgers’ manager Dave Roberts was forced to make changes due to analytics. It cost LA the championship.

Having fun on the field

Adrian Beltre and Miguel Cabrera had fun. Fans want to see their stars have fun. Look at players today. Their faces are grim. They don’t smile. The game needs personality. Analytics have something to do with it. A guy comes to the plate, takes his cap off, checks his notes. Again, baseball needs individual personality!

When I was growing up, Vin Scully and Jerry Doggett were my guys, but I was blessed to hear the Angels trio of Dick Enberg, Dave Niehaus, and Don Drysdale, who later worked with Hawk and then with the Dodgers until he died. Enberg said that Drysdale would call a pitch, shut the mike, and mutter, “He’s got nothing on the ball, get him out of there,” then put the mike back on and go on as if nothing happened. I remember the “quality start” became a stat when he was with the Dodgers and when he’d refer to it,… Read more »