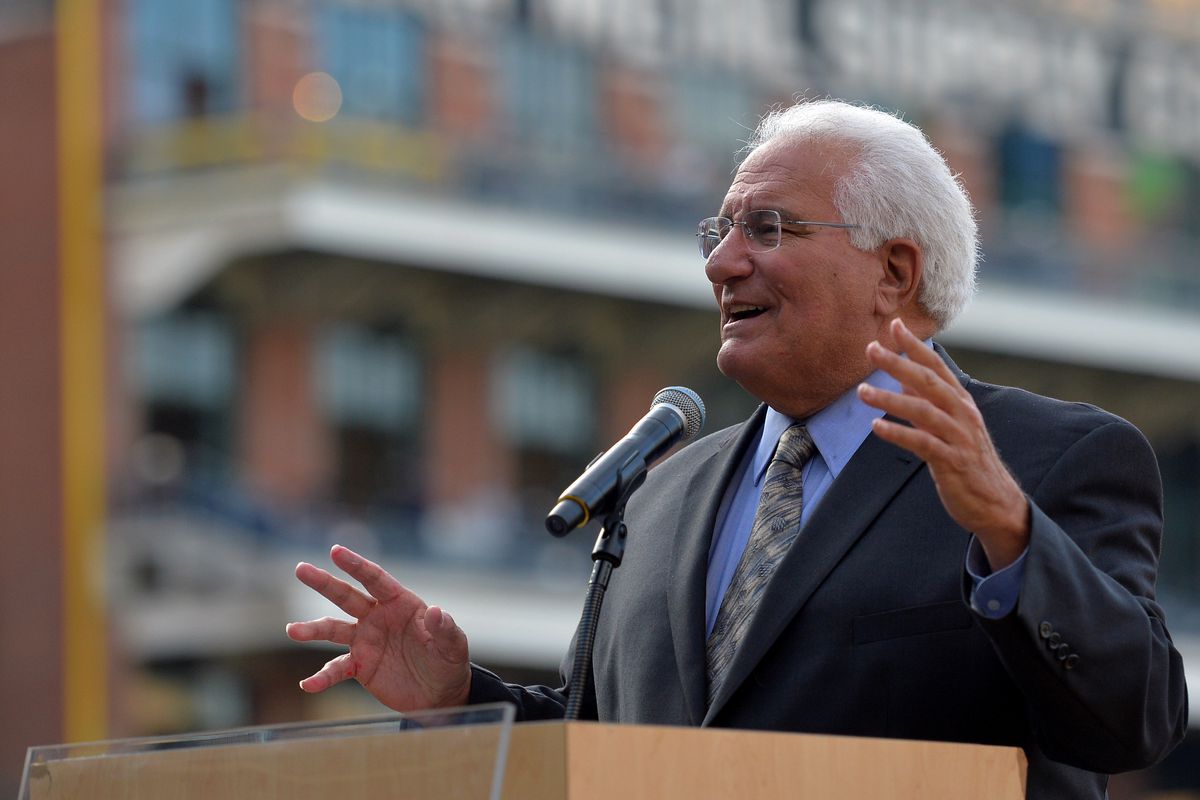 My subject for today’s post is someone 99% have probably never heard of. But he means a lot to me so he’s worth a shout-out.

Ted Leitner is leaving the San Diego Padres radio booth after 41 years. Proud to say I was his partner for three of those years.

Ted is a San Diego institution. He did TV sports for many years, has also called the Chargers (who still belong in San Diego), and San Diego State football and basketball.

In a word, Ted is unique. He’s opinionated, an excellent play caller, master storyteller, warm, bombastic, insightful, sarcastic, and very funny. His play-by-play is unlike anyone I’ve ever heard and that’s probably what I love best about him. Especially now, when personality is discouraged and announcers tend to be very generic.  In today’s social media world, generic means “safe” which means fewer complaints on Twitter and Facebook and blogs.

But it also means less fun, fewer surprises, and no reason to still listen if your favorite team is behind by 7 runs in the 4th inning.

When the team was playing well, Ted called them “My Padres.”  When they played horseshit they were “Your Padres.”

Off the air he was a terrific guy.  Let me share this story.

In 1993, I was calling games for the Seattle Mariners. During the offseason I got a call from Jerry Coleman (then the Padres number one announcer) asking if I’d speak at his charity banquet.  He put together a group of speakers from among Major League Baseball announcers every year.  I was happy to oblige.

On the panel was the great Harry Kalas of the Phillies, Ralph Kiner of the Mets, Jerry, me, and Ted. It was a good crowd. My speech killed. Ted then had to follow me. His speech did not get the laughs it deserved.

The next day as I was packing to leave I heard Ted on the radio with the morning hosts talking about the previous evening’s event. He said he had bombed (not totally true) and learned never to follow a comedy writer. I thought, well, shit, Ted Leitner now hates me.

Flashforward a couple of years. Jerry Coleman gets the assignment to do the CBS Radio game of the week every Saturday so the Padres needed someone to fill in every weekend.  The President of the Padres was Larry Lucchino who had been the President of the Baltimore Orioles when I broadcast for them.  He was having dinner with Ted discussing who might fill that position. Larry recommended me.

What a perfect job that would be.  I could continue my writing career in Los Angeles and every weekend join the team and call baseball. Best of both worlds.

Ted had to sign-off on it.  It would have been so easy for Ted to say, “Oh, THAT guy?  NO.”  Instead he said, “That’s a great idea! Get him.” Believe me, there are many, many, many others in the business who are insecure and would feel threatened. Not Ted. We always had fun together on the air, and I think we each made the other sound better.

Ted is still doing the Aztecs football and basketball, and he’ll be an ambassador for the Padres.  I hope he gets to enjoy his first summer in 41 years. I wish him nothing but the best.  His successor, Jesse Agler, is a top flight young announcer and I wish him the best as well.

But I’ll miss Ted on the air.  Now and forever they are “HIS Padres.”

Reprinted with permission of Ken Levine, Hollywood scriptwriter and former MLB announcer for the Orioles, Mariners and Padres. His posts appear regularly on his site: