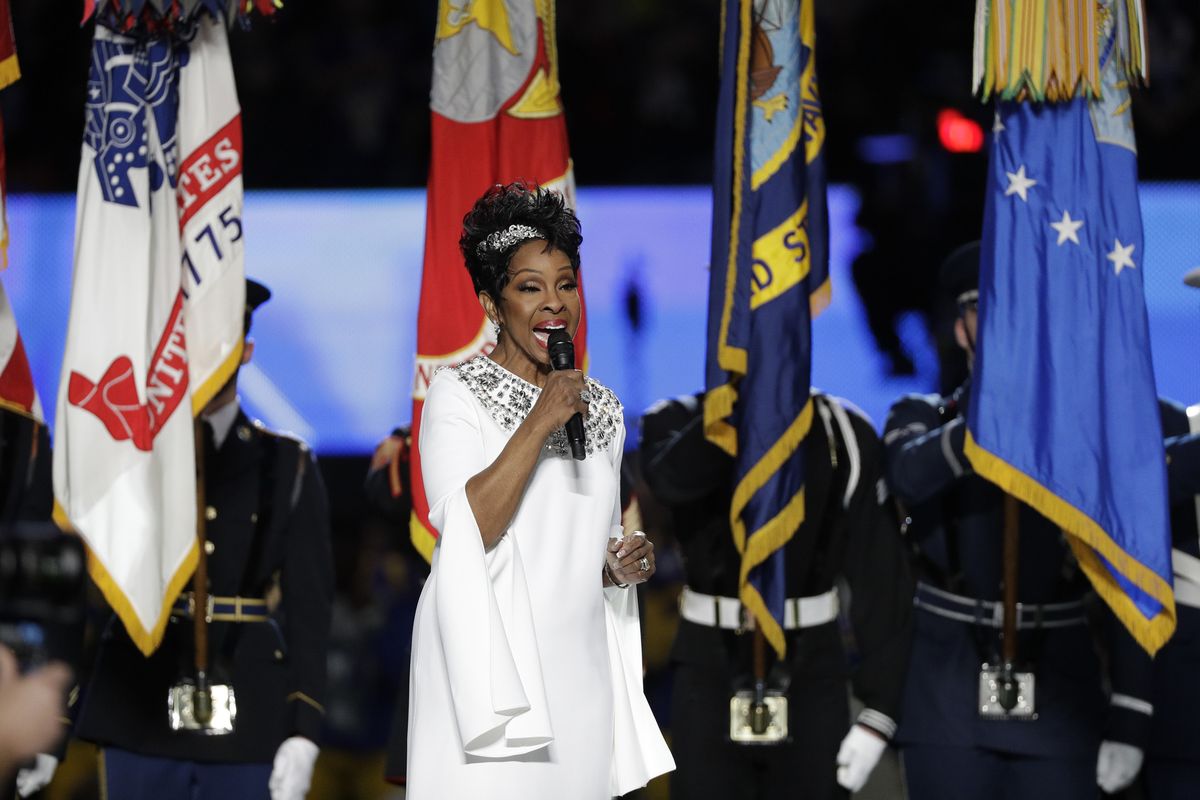 The NFL has registered trademarks on SUPER BOWL and SUPER SUNDAY so no one is allowed to use those terms without permission.  That’s why ads for TV’s boasted “You’ll be ready for THE BIG GAME.”  Adhering to the law I shall resort to euphemisms.

In all the LICCXXILICCIXC years they’ve been playing THE BEER COMMERCIAL BOWL there’s never been one as boring. And that goes for the commercials and halftime show. It was like six hours of THE ENGLISH PATIENT.

The highlight was clearly Gladys Knight singing the National Anthem. They should have let her do the halftime show as well. And run the Rams’ offense. I’m only sorry though she didn’t come out in the Bee outfit she wears on THE MASKED SINGER.

Highlight number two:  The Washington Post commercial heralding the value of journalism. I’m sure the person who needed to hear that message the most had his head buried in his fourth KFC bucket of extra crispy.

CBS covered the game this year, which meant Jim Nantz and Tony Romo. Nantz is always solid (although he made a few bobbles along the way) and I’m always impressed by how observant he is.  More than Michaels or Buck he seems to see little things on the field.  And Tony Romo is just a breath of fresh air.  Even though I have no idea what he’s talking about half the time, his enthusiasm and uncanny ability to predict what is going to happen next makes him the MVP of the booth.

Is it just that the commercials were uninspired and derivative this year or after XXLLICCLXIII years of the TITANIC TILT, it’s just not a “thing” anymore?

Sponsors spend millions on overblown excess commercials that are not funny for a second. Why not take $100,000 of that and hire comedy writers who know what they’re doing?

Stop with the robot ads!  People hate them. You’ll notice that among all the many reboots these days no one is bringing back SMALL WONDER.

Notice all the NFL “We believe in Social Justice” and “Look how community minded our players are” spots there were? Heavy spinning to sweep under the rug all the player arrests. This year alone (and we’re only one month in): Trevor Bates for assault, De’Anthony Thomas for drugs, and P.J. Williams for a DUI. Among the charges NFL players were arrested for last year were domestic violence, eluding police, trespassing, insider trading, battery, public intoxication, injury to the elderly, vandalism, sexual assault, and a bomb threat. Yes, you want the NFL in your community.

Wow. Harrison Ford is doing Amazon commercials. To me that is a lot sadder than Han Solo getting killed.

I did like the Bud Light corn syrup spot. And their GAME OF THRONES crossover.  But seeing that flying dragon really made me miss the Budweiser lizard.  Am I alone in that?  Hello?  Dilly dilly?

This is the first year that the singing of “America” took longer than the first half highlights.

I’m sorry but that Planters Peanut car, with the ridges along the side – suggested uh… “another image.”

The halftime show was like if the Orange Bowl halftime had been planned by arsonists.  Flames were shooting everywhere.  For no reason whatsoever.  And I know this is going to make me seem like 100 years old but Maroon 5 sucked. They’ve officially become Nickelback.

CBS took such flack when the wardrobe malfunction revealed Janet Jackson’s nipple for a tenth of a nano second, and yet Adam Levine was allowed to take off his shirt and preen around with all those hideous tattoos. Jews are forbidden from getting tattoos and one of the reasons is so they don’t look like entitled white boys trying to pass for street and hip.

And then there was Big Boi in his giant fur coat.  He’ll be getting a call from PETA.  And he can’t claim he needed it because it was cold. 37 booster rockets were taking off while he – it wasn’t singing – while he strung nonsense words together so fast that nobody could understand what he was spewing. If you slowed down the tape he might’ve been saying, “If you like this look, watch THE DEUCE on HBO.”

You know it’s a bad game when Jim Nantz, tongue-in-cheek, goes crazy when a 65 yard punt broke an EXCUSE TO DRINK IN THE AFTERNOON BOWL record… even though the ball bounced for 27 yards.  Jim displayed a rare flash of humor when he then announced, “It’s going to get exciting now!”  Alas, he was wrong.

I did think the Shoppers Assurance commercial was funny.  All the levels of hell – middle seats on airplanes, “the talk” from your dad, etc. And now you could add to that: having to sit through a replay of this game.

The INSOMNIA CURE BOWL was so boring that Tony Romo had to continually remind viewers in the second half that the game was tied.

I know Rams fans are disappointed but cheer up, MAN WITH A PLAN returns Monday night to CBS!

Really?  Someone spent millions of dollars to advertise better water bowls for your dog?

And Olay needed a horror-themed commercial to sell moisturizer?  With Sarah Michelle Geller who has skin so perfect she could wash her face with Lava?

Even the winning touchdown was boring.

The only thing that could have made this game worse was if the MNF crew had called it.

And at least the Rams don’t have to go to the White House. So in a sense, they won.

When do pitchers and catchers report?

The talented Ken Levine does a regular blog that always generates a chickle. Check it out:

https://hollywoodandlevine.libsyn.com/    or iTunes or any of the podcast apps.  You’ll be happy you subscribed.

I said it on Ken’s wonderful blog site and I’ll say it here. Every year, on the final Dodger post-game show of the year, after they discussed the season, Vin Scully would ask Jerry Doggett if he had final thoughts. Jerry would always reply, “When does spring training start?” As far as I’m concerned, all of this was just time-filler between baseball games.