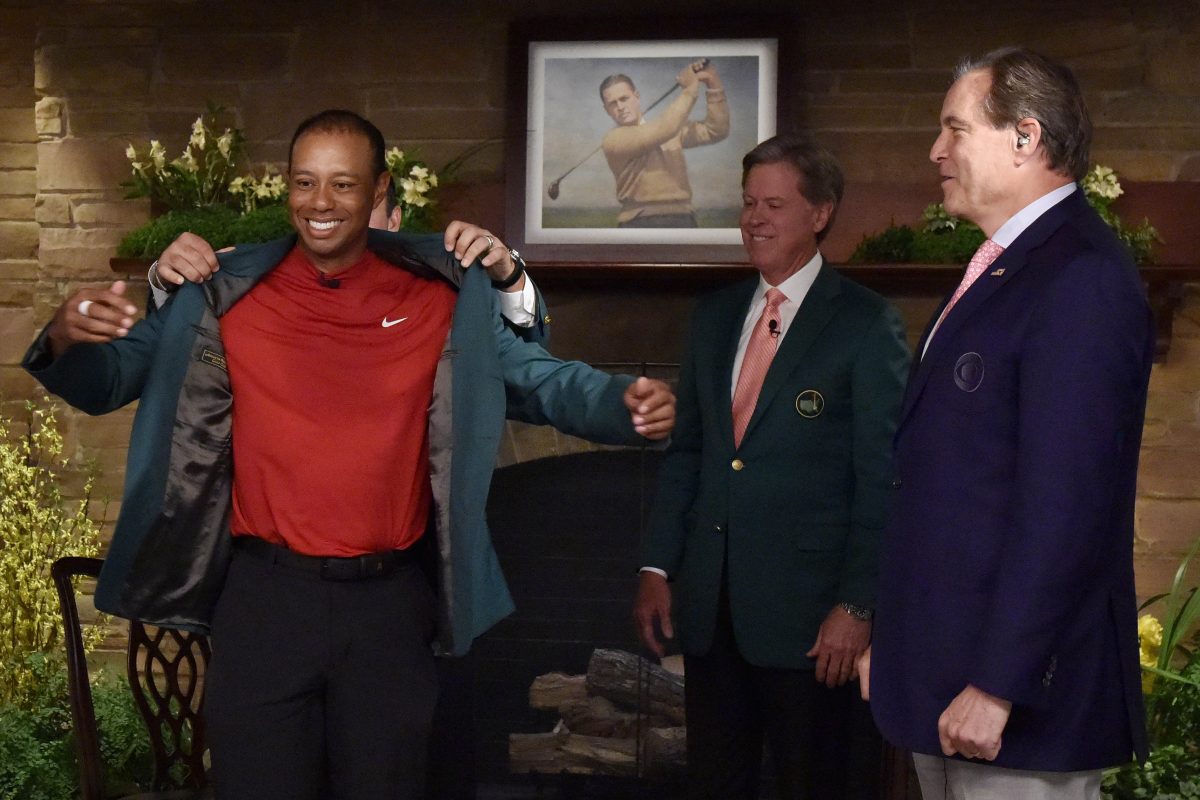 We had a golden opportunity to talk about this year’s historic Masters with the man who produced its television coverage, Lance Barrow. We’ll delve more into Lance’s colorful background in part two of this series prior to CBS’ upcoming coverage of the PGA championship. Suffice it to say, Lance knows his business. He’s been around televised golf since 1977, when, in his native Texas, he spotted for CBS’ Pat Summerall at The Colonial.

Barrow is the coordinating producer for CBS’ golf coverage and today he takes us through the gripping week in Augusta, a week that transcended sports and captured the attention of millions of Americans.

Please share with us your preparatory thoughts heading into the big week. Were you already constructing and assimilating different scenarios, if this or if that happens, based on Tiger’s performance?

I always say to people and did so even in ’97 before Tiger won his first Masters that he’s a part of the story whatever he does. We’ve been lucky enough at CBS to be a part of 9 of his (15) majors victories. There’s one thing about the Masters. The top players in the world always seem to always be a part of the story. As you know, everything really does seem to usually come down to that back 9 on Sunday.

Do you also produce ESPN’s early round coverage on Thursday and Friday?

Yes. It’s our entire CBS sports team with the addition of a few ESPN announcers.

Knowing very early in the week that the weather forecast was dicey for Sunday’s final round, how do you as a producer prepare for this possibility and what challenges does it present?

There are a lot of moving parts. My mom would say you can’t do anything about the weather. I can’t really worry about it and I don’t sit around Monday, Tuesday or even Saturday night and dwell on it. It was obviously a genius decision to move the tee times up as the weather became severe within an hour or so after the tournament’s completion.

Did you have a sense early on that the Masters leaderboard would remain bunched?

I think it’s the norm in professional golf. There are so many great golfers especially in the Masters with the 10-stroke rule. These guys can make a lot of ground up quickly. It’s unusual to see a runaway these days. The way the leaderboard was going, especially on the back 9, it was just incredible. The Augusta course gives you that kind of action.

Four of the most well know golfers in the world in the final two groups dunked their shots into Rae’s Creek on number 12 in Sunday’s last round. Take us behind the scenes as to the conversation between you, Jim Nantz and the rest of the crew as Tiger pulls into a tie for the lead.

That’s what’s great about our team at CBS Sports. We’re a veteran group, from the announcers all the way through our technical people. You just have to stay on top of things and remain focused. I’d compare us to the golfers in this way, we must stay focused on every shot. We can’t stray for a moment. With golf, once you go on the air, you’re on the air. There’s no halftime. You’re concentrating at a high level. Opinions from several member of the crew are coming in so quickly. Replays, advertising billboards, on-course techs, who’s hitting first in a group and more. Everyone’s inputting lots of information, so remaining calm and making those split-second decisions are key. When the leader, Francesco Molniari put his ball in the water, Jim Rikhoff, our replay producer, immediately said “Game on!” That’s when we went into high gear.  We knew we were going to have a great day anyway with the names that were there, even without Tiger. It was an incredible leaderboard.

Talk about Verne Lundquist. Once again, his hole at 16 proves to be a major factor.

I grew up watching Verne on my local ABC channel in the Dallas/Ft. Worth area and of course he did Dallas Cowboys play by play for many years and I say the following in such a complimentary way. He’s a professional announcer. He’s always there and says the right thing at the right moment in everything he’s done in his career. That’s what makes him the legend that he is.

When Tiger won, you had some incredible moments, particularly the 2 minutes and 43 seconds of silence.  How do you as a producer know when to chime in. What was your conversation like with Nantz and Nick Faldo?

What I said to them is talk when you feel like you need to. They really made that decision. It’s a team effort and they’d say the same. There’s a great line from the movie Tin Cup which goes, “Either you define the moment or the moment defines you.” I really believe our entire crew defined that moment when we were watching Tiger.

The hardest thing to do as a producer is to understand that there’s no right way or wrong way with live television. Rickhoff had replays stacked up. The first thing I said to him was we’re going to go to video tape #2. But we held off. There was so much going on and we let the entire victory scene play out. Thankfully we didn’t miss the priceless moments with family, friends, the gauntlet of fans and former champions waiting for Tiger at the clubhouse, because of a replay. It’s live television and we pulled it off.  Our entire crew really defined that moment and it just comes down to preparation from across the board from (CBS Sports Chairman) Sean McManus and the entire leadership in every form of our division.

The split screen shot of Tiger winning in ’97 and then in ’19, both of them with his family in celebration in virtually the same location. It was an amazing shot.  Was it something for which you prepared?

We get ready for the Masters months in advance. It’s really a 365 day a year job. After football season is when we really delve into it. We probably have Tiger on a reel hugging his father in every tournament he played. This was just as amazing. Yes, we were indeed prepared. It wasn’t some Sunday morning decision to have that ready. We might not have used it for 12 years but it’s always there and we better have it when we need it. We were quite aware where the family was and our camera operator in that area alerted us on our monitors.

Are you amazed at someone like Jim Nantz who eases into the Masters coming off an emotional NCAA championship game the previous Monday night?

Jim’s the ultimate professional. I think to be successful, first and foremost, you have to love sports and be a fan. Jim loves it all and he prepares year-round for all of this. I figured he woke up on Tuesday morning in Minneapolis and said it’s Masters time let’s go!

I’d be remiss if I didn’t ask you this. Was there anything that would have changed for you if the Masters had a Monday finish?

No, we were still covering the Masters and it wouldn’t have changed anything from our vantage point.