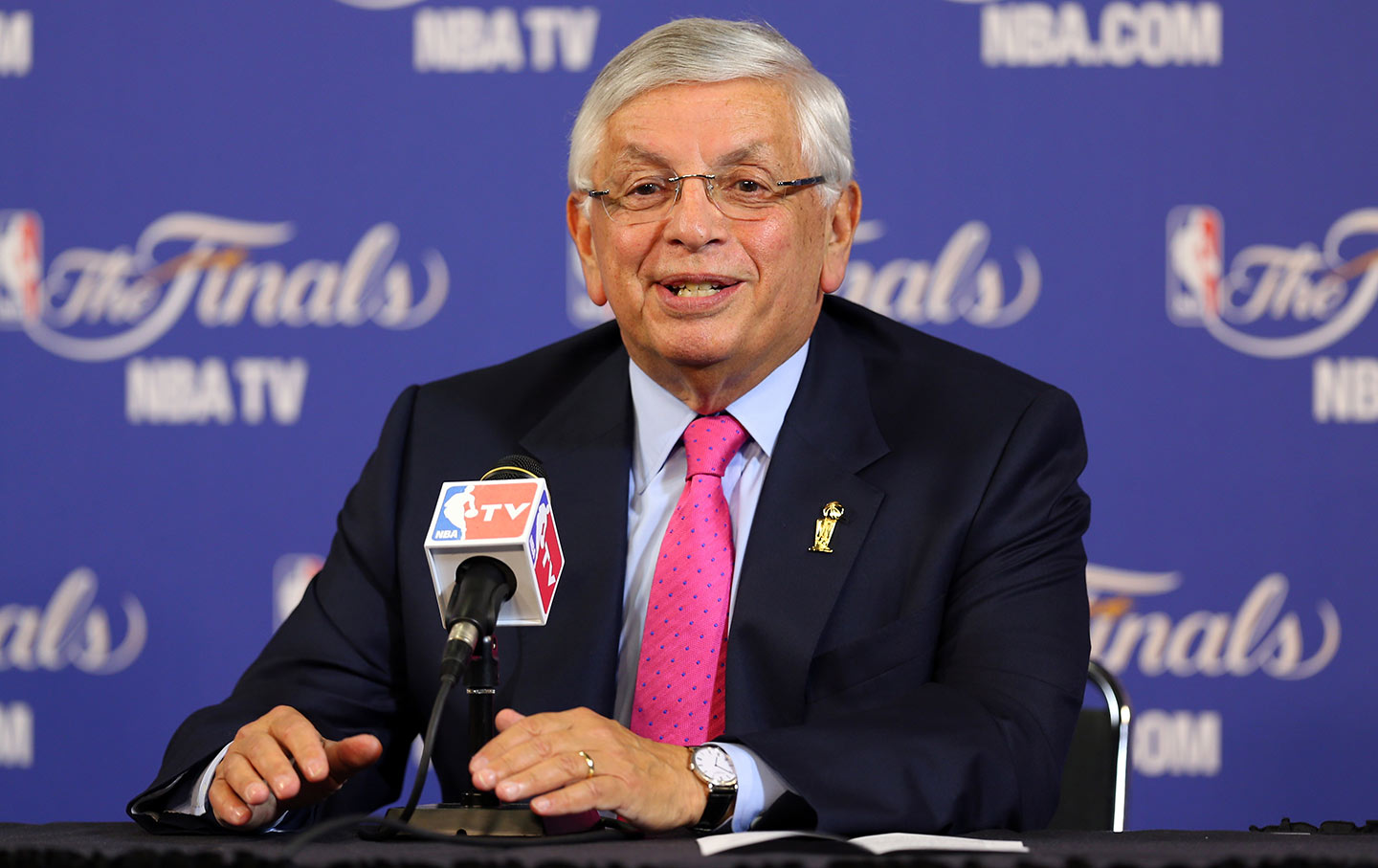 Bob Costas on David Stern (above). "Stern was perhaps the most successful of the modern commissioners."

Peter Vecsey, the all-time most powerful columnist covering the NBA said yesterday. “We, any media member, could have asked him just about anything and he’d give you a straight answer.”

Stern wasn’t intimidated by the media. He knew when and how to show his hand, when to be combative and how to cultivate trust among those who covered the league.

Stern knew when to employ a strong offense as his best defense, to exercise diversion tactics or to use counter attacks to flaw questioners’ credibility. He could nimbly turn the tables on an interviewer in a New York second.

Vecsey says, “Before you interviewed Stern, you not only had to be thoroughly prepared on what to ask. You had be ready for his answers which you could never fully predict. I enjoyed my interaction with him.”

In 2012, network radio personality Jim Rome disrespectfully asked the commissioner whether the 1985 NBA Lottery was fixed. There had always been a lingering suspicion among the skeptics. The Knicks wound up with the first pick, superstar Patrick Ewing, and the league got a huge name in the country’s largest market.

After Stern answered with one firm word, no, Rome persisted. Stern had enough. “Shame on you for asking,” he answered angrily. It was followed by another Stern classic, “Have you stopped beating your wife yet?” Punch, counter-punch. Stern wasn’t afraid to engage in heated debates. In the end, Rome looked like the bad guy.

There was always a mystique, some inscrutability around Stern. It was part of his and the NBA’s charm through the league’s explosive years of worldwide growth.

When the league was on ABC (1965-’73) analyst Jack Twyman would throw Commissioner Walter Kennedy (1963-’75) softballs. Most were setups for Kennedy to tout the NBA’s increase in attendance or some other accomplishment. Fast forward to the 1990s, Bob Costas was no Jack Twyman and Stern was no Walter Kennedy.

The stage was growing. The NBA was bigger. Michael Jordan, Magic Johnson and Larry Bird were the stars that Stern and company promoted. Costas wouldn’t toss Stern softballs. He’d ask David about Michael Jordan’s high stakes gambling and wouldn’t take his foot off the accelerator easily.

Stern never looked rattled. Even when grilled by the best, the commish was unflappable. Watching the two heavyweights interact on NBC during the NBA Finals was always stirring. Invariably, the interviews had a shelf life as a subject of conversation.

I had a chance to talk with Peter Vecsey about Stern and also get some comments from Costas on his relationship with the commissioner who passed on Wednesday.

Peter Vecsey covered the NBA beginning in the late 1960s, working for the New York Daily News and the New York Post. He was also a nationally syndicated NBA columnist. As any NBA fan through the decades knows, Vecsey’s column was a must read. His views, nicknames and insight fueled fan interest across America.

For twelve years, Vecsey was also part of NBC’s presentation of the NBA.

You went back with Commissioner Stern and the league for decades.

When I started writing, my goal was to make the NBA minimum. What it’s jumped to now, I could have retired a long time ago. (An NBA rookie today earns $893,000.) I could even retire on players’ meal money ($133 in cash per day)!

You might be shocked to hear this. But during my twelve years working the NBA package on NBC, Stern never said a thing to me. He never told me what I could and couldn’t say.

You were involved with NBA’s first ever cable package when games were carried on the USA Network between 1981 and 1984?

Yes, the league was very involved with the production of the telecasts and I was fired by Stern after three or four dreadful halftime segments that were taped in my apartment. I had said something about either Bernard King or Spencer Haywood, one of the two. David didn’t like the fact that I came down hard on one of them so he fired me. But to his credit, he paid me for the term of my deal. My wife and I had just bought a vacation home and we were shopping for furniture for both the living and dining rooms. We named both rooms, the ‘David Stern Rooms.’

Yet, years later, you were hired by NBC when it acquired the NBA rights (1990-’02). How did Stern allow that after firing you?

Stern told me that the league can now handle me on NBC’s bigger stage. He never backtracked on it.

Did anything occur on NBC that got David Stern upset?

He came down on NBC big time when a feature ran on Karl Malone shooting a frightened beautiful cat. It was ugly. Bright light beaming in mercilessly on the cat trapped in a cave. Mike Fratello and I saw a preview of it. We were doing halftime and would have to comment about the feature. I immediately told producer Ricky Diamond that it does not deserve to be on the air. I was vehement about it. Of course, NBC put it on air. Stern went ballistic and let Dick Ebersol have it. David’s wife Dianne is an animal activist. Heads should have rolled.

How did rank and file players feel about Stern’s strategy to promote individual stars?

Look, the players realized that it was working. Everyone benefited financially so it was accepted. Teams though weren’t necessarily happy about it. Basketball is a team game.

He loved to debate. I interviewed him twice nationally. You could ask him anything but you had to do your homework. David gave the press freedom. He never really called me in on anything I wrote. The media appreciated that you can get a straight answer from him.

When Stern became commissioner in 1984, he invited me up to the league office to talk with him. I had begun recruiting players, working with agent Richie Kaner, to make up teams that went over to Italy. Knowing of this, Stern congratulated me and told me I was doing a great job. But added with typical profanity, ‘Now I’m the commissioner and f….you, we’re going to do it.’ I understood. It was his league and he was straight forward with me. Richie and I had the international vision then. Apparently, David did too!

Bob Costas is inarguably network television’s best ever sports studio host. Whether at the venue or in the studio, Bob’s work was critical to the success of NBC, the years it ran the NBA.

How would you summarize David Stern’s thirty year tenure as commissioner?

Stern was perhaps the most successful of the modern commissioners. He was a visionary. Under his leadership the NBA went from sports league to global brand. He was progressive on social issues but willing to be very tough on discipline when necessary and in labor negotiations.

What was it like interviewing Stern and how did he respond to probing questions?

He was extremely intelligent with the agile mind of a lawyer, which of course he was, presenting his case or handling challenging questions. We once had a tense Q and A at the NBA finals (1993) which led some to think we had a contentious relationship. In fact, we got along very well and I liked him very much. Each season he would tease me about how he was looking forward to our interview at the finals. ‘Got some good questions ready?’

He understood how much I and everyone else at NBC loved the NBA and the big role the network played in presenting and promoting it. But every league has issues and controversies. And for several minutes once a year, he appreciated that it was my job to treat it like a straight news interview. We both enjoyed the give and take. I respected him greatly.

In 2011, ex-NBCer and now longtime HBO host Bryant Gumbel said that the only way a lockout would be avoided was “in spite of David Stern, not because of him.” What really stuck to Stern’s ribs was Gumbel’s trenchant dig, calling Stern a “a plantation overseer.”

Asked about Gumbel in 2017, three years after his retirement as commissioner, Stern told the Washington Post, “I have no respect for him, so that didn’t upset me at all. My response was I’ve done more for people of color than Bryant Gumbel has.”

Stern will of course be missed. He stayed active until the end, stricken while in his boots doing business over lunch at a Manhattan restaurant. Watching him with the media was always compelling. His facial expressions always suggested that he was comfortable, looking forward to tough questions and winning the debate.