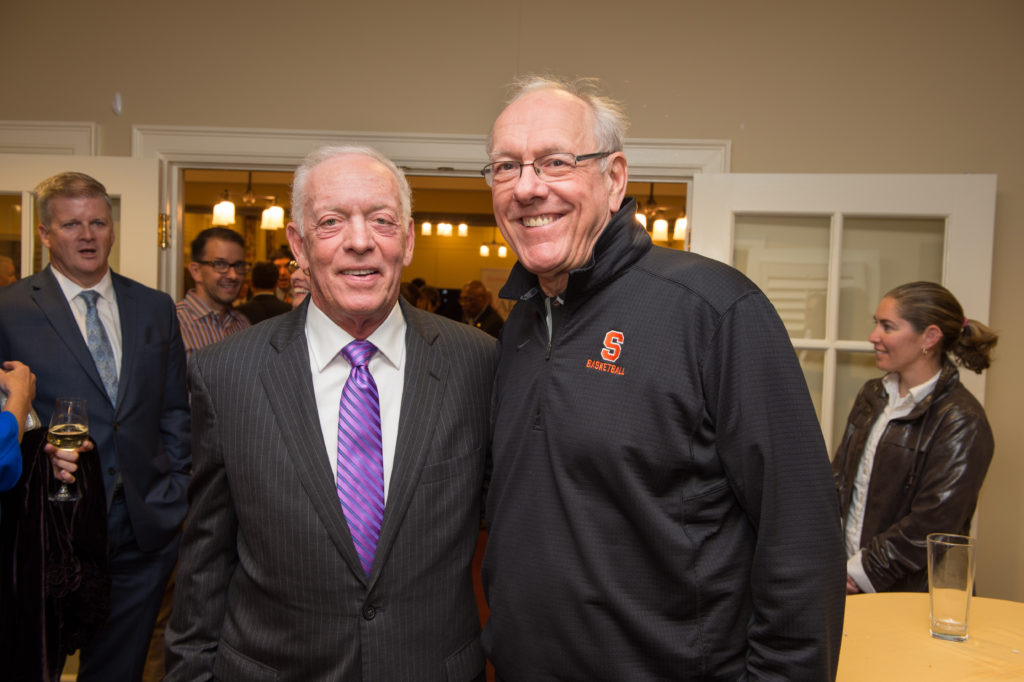 Dick Stockton announced his retirement yesterday after a glistening 55 year career on network television. I think of Stockton as the Cal Ripken of network play-by-play, for his consistency and time in grade. Dick’s professionalism was unmatched and his preparation unequaled.

There is really only one person who could paint the most graphic picture of Dick, the person, and the broadcast pro. It’s the splendid and gifted writer and broadcaster, Lesley Visser. I boldly reached out to her yesterday and asked whether she would write something real quick. Lesley is a thoroughbred when it comes to deadlines. It too is an eye-popping gift.

Dick Stockton and Lesley Visser met at the legendary sixth game of the 1975 World Series, when she was writing for the Boston Globe and he was broadcasting for NBC. They were married for 26 years. Both are remarried, Dick to Jamie Drinkwater from Scottsdale, Az. and Lesley to Bob Kanuth, a businessman and former captain of Harvard basketball.

Lesley Visser was a star writer for the Boston Globe. She’s a pioneer women broadcaster and a coach to so many.

Lesley Visser on Dick Stockton in her own words: 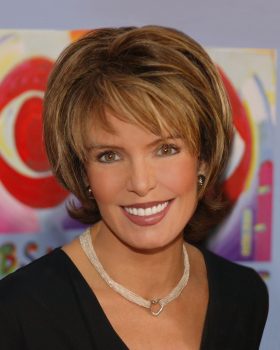 Dick Stockton is the happiest he’s ever been – which pretty much describes his whole life.  When he first went to CBS, after leaving the Red Sox and his iconic home run call in Game 6 of the ’75 World Series, his job at CBS was not football, or basketball or baseball, his holy trinity.  It was going around the world with Ed Goren (then with CBS, now the retired President of FOX Sports) for something called “Sports Spectacular,” which both Dick and Ed said was “neither sports, nor spectacular.”

Created by the great visionary Eddie Einhorn as a way for Eddie to see the world and stay in great hotels, “Sports Spectacular” was the poor cousin to ABC’s “Wide World of Sports.” While ABC had Jim McKay and “Acapulco Cliff Diving,” Dick and Ed Goren paid 15-year-old kids $20 to swan dive off the 100-foot cliffs. CBS called it “Acapulco Cliff Divers” and Einhorn was thrilled.  Once Dick had to wear a mariachi hat in Mexico City while hosting a boxing match. Another time, reporting from the Rift Valley in Kenya, where most of the world’s greatest marathoners train, Ed Goren convinced some locals to lope behind the camera shot while Dick pretended they were somehow related to the great Kip Keino, who was actually running over on ABC’s “Wide World of Sports.”

Dick and Ed, and sometimes their old pal Mike Weisman (former Executive Producer of NBC Sports) would tell stories of their early years. They were hilarious. Ed even had a photo of the time Einhorn insisted Dick wear a flowered lei around his neck on Waikiki Beach while leading to the World Surfing Championships.  Weisman was in the NBC truck as an assistant to the producer for the sixth game in 1975, while Dick was in the booth.

“We always laugh about the irony of two kids from Queens, who’d grown up only miles apart, working one of the most legendary games in history of baseball,” Weisman told me yesterday.  “And some people might not know that when the game went into extra innings, NBC didn’t have a plan! Someone in the truck blurted out that maybe they should just alternate play-by-play of every inning between Joe Garagiola and Stockton.  Dick had the 12th inning and the finest moment of his career.”

Dick did play-by-play for, not just the World Series, but for the NBA Finals, the World Broadcast for nine Super Bowls (he said he was “big in the Pacific Rim”) and hosted the Final Four. But he looked at “Sports Spectacular” as a way to see the world and make some memories.  Dick always connected with any event and many of the people, whether it was trading cigars with Michael Jordan in the locker room before a playoff game or having a drink in Paris with Pat Riley after the season ended.  Dick used to go shopping with Chuck Daly at Dollar Bill’s, a department store on the East Side of Manhattan, and come home with a bag of discount shirts.

A number of colleagues made an enormous impact on Dick, which he carried through his 55-year career. First was Curt Gowdy, who was without artifice and enormously generous to young broadcasters.  In 2001, after Dick was voted to the Basketball Hall of Fame, winning the award named for Curt Gowdy, a few of us went to Mr. Gowdy’s house on El Bravo Way in Palm Beach. It was a legendary home for a legendary broadcaster, a Spanish masterpiece built in 1929, with 11-foot ceilings, and a ballroom big enough that Rudolph Nureyev once danced there.  Ironically, my current husband Bob Kanuth, lived three doors down in a 1929 home designed by Addison Mizner.

Another of Dick’s close friends was the dignified Bill Russell, who just made everyone want to sit up straighter. Normally reserved, Russell was famous for never signing autographs, but let out a trademark cackle when Dick told Bill years later that he’d kept a $10 check from a bet they’d made, just to have Russell’s autograph.

Dick always wanted to be a sportswriter, and so he was thrilled to make the acquaintance of TV’s most elegant wordsmith, Jack Whitaker. When they met at a hotel bar in Washington, Dick heard Jack order a “Lords Gibson on the rocks.”  Dick, being 33-years-old and idolizing Whitaker, ordered the same thing, having no idea what it was and waking up the next day with a massive headache. No less influential was Hubie Brown, who once called Dick a “jerk.”  That was before they met. Working together on the NBA Finals, Dick had enormous appreciation for Hubie’s preparation and work ethic. He also did a wicked Hubie impersonation, which everyone – even Hubie – knows is dead on. When I would spend a week in Hawaii to cover the Pro Bowl, Dick would come and play golf with Al Michaels. For 18 holes, Dick would imitate Hubie and Al would do his Cosell.

With a childlike optimism and enthusiasm, Dick enjoyed everything, just as he does today. Now married to an outstanding tennis player, the former Jamie Drinkwater, Dick’s still playing at the age of 78. Vince Doria, a great friend and the former Senior Vice President of News at ESPN, called Dick yesterday to catch up.  They recalled when a group of us would bicycle through Europe every summer. On one trip through Alsace, Dick would stop twice a day to try another choucroute (which is some fermented cabbage thing). At dinner, over Alsatian wine, Vince and Dick would debate everything. One discussion was about whether Jo Jo White’s toe was out of bounds when his shot went through the basket in overtime against Texas Western in the 1966 Regional Final, meaning that Kansas would go to the Final Four and not the legendary all-black Miners of now, Texas, El Paso.

“Nothing seemed beyond Dick’s memory,“ said Doria, who had the same depth of knowledge from a galaxy far, far away, before Google and the internet. “Dick said he really learned to focus from Lindsey Nelson. Nelson called everything, almost flawlessly, at the highest level. Dick admired his precision and his accuracy.”

Which described Dick, except for the rare occasion when he was completely flummoxed. Two people he greatly admired outside of sports were Rex Harrison and Burt Bacharach.  When a group of us ran into Harrison outside the Ritz Carlton in London, Dick started yammering and began introducing all of our friends to each other. Mr. Harrison rolled his eyes and walked away.

Dick did better with Bacharach, whom Dick and Jamie just saw perform in Tucson and who’s become a friend.  I’d met Burt at the 1994 Kentucky Derby, where his horse Heartlight was a contender. Dick has played Bacharach’s music for 50 years. In the mid-90’s, when I was in Los Angeles for a game, Burt invited me over to his family’s house for an afternoon of music. Both Dick and I were so excited. Burt – who of course wrote 25 standards for all time – asked me to name a song, any song, for him to play. I said my favorite Bacharach song was “The Man Who Shot Liberty Vallance,” and I started to sing it. Burt looked at me as though I came from Mars – “Go home!” he yelled, waving me away, “that song was a piece of crap.”  When I told Dick, he didn’t speak to me for a week, either.

Dick is loyal to the core, and that’s why Eric Shanks said he could always have a job at Fox. Anyone who’s worked with Dick, or has known him, cites his authenticity. Ernie Accorsi, the former General Manager of three NFL teams, is one of Dick’s oldest friends. He told me their first conversation was about Jim Mutscheller’s pivotal catch in the “Greatest Game Ever Played,” the famed Giants-Colts overtime in 1958.  That conversation was in 1970, when Ernie was the public relations director of the Baltimore Colts and Dick was the sports director at KDKA in Pittsburgh. They still talk twice a week.

With Dick, it is all behind him and it’s all in front of him.He told me he can’t wait until travel opens up so he and Jamie can go to London and catch some theater in the West End.

Today is his day, he’ll get on his way. May we all have such a life in full.

I don’t know which is better: The commentary itself, or that this is Dick Stockton’s former wife talking with such love and respect about him. Absolutely lovely.