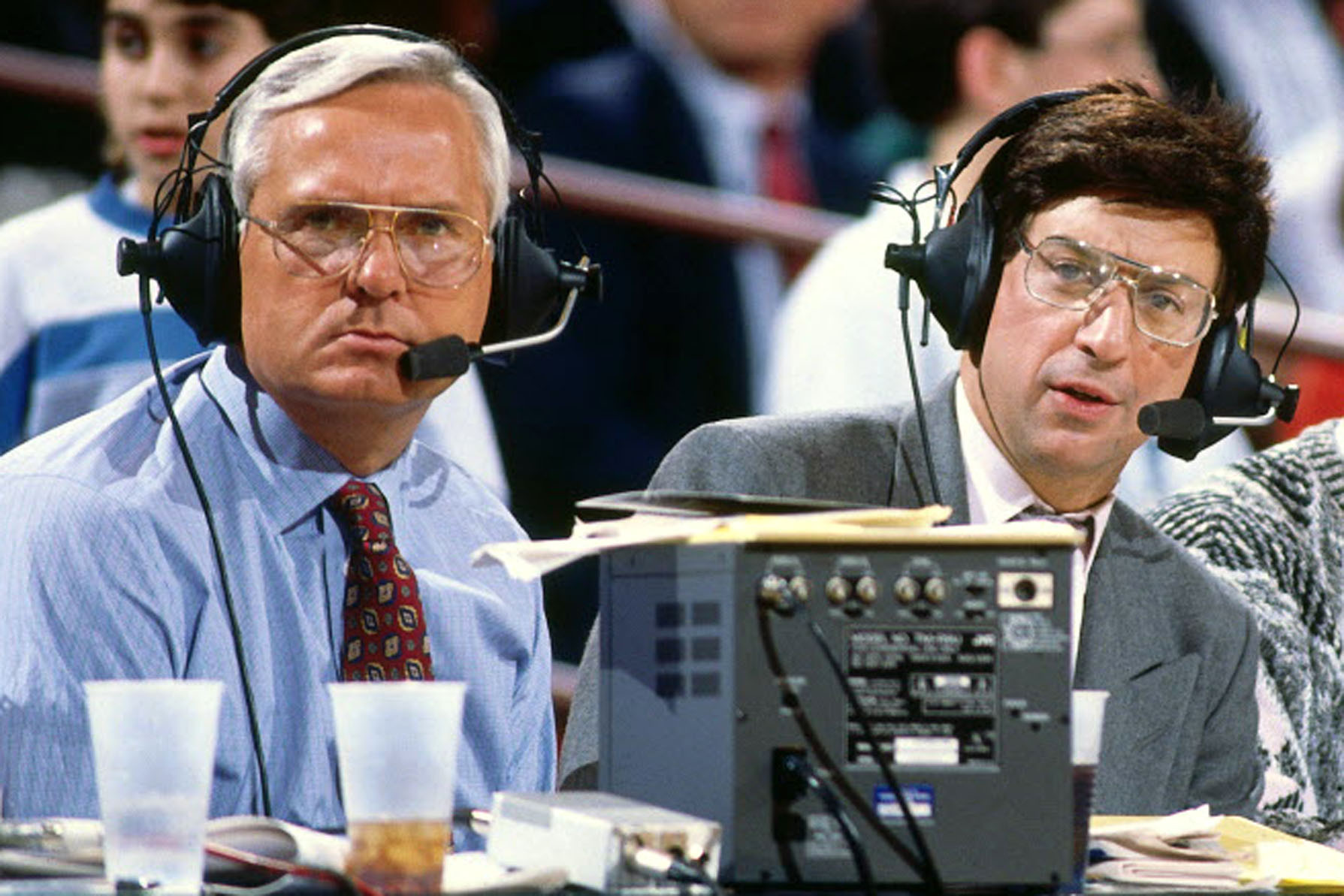 In earlier years, Marv Albert (r) teamed with John Andariese on both Knicks radio and television

As a high-schooler in the 1950s, Marv Albert began working at Madison Square Garden as a Knicks ball boy. For Marv, it was the start of an affiliation with the arena that extended for all or parts of six decades.

Marty Glickman, then the Knicks announcer, took Marv under his wing and helped guide his career, particularly early. By age 21 on January 27, 1963, Albert filled in on his first basketball broadcast; in Boston against the Celtics.

Shortly afterward, March 14, 1963, Albert subbed for Jim Gordon on a Rangers broadcast in Detroit against the Red Wings. While his connection with the building skipped a couple years, once in the 60s and again in 90s, Albert was prominently affiliated with the Garden as a broadcaster for some forty years, He is still best known for calling both Knicks and Rangers games on either radio or television, narrating the action through thick and thin.

Of the non-athletes or executives associated with the World’s Most Famous Arena, it would be tough to identify anyone else, linked as long or as popularly as Marv. Fans certainly loved his passionate calls. Marv has chronicled some of the greatest moments in the history of the building’s prime tenants; two Knicks’ titles (1970 and 1973) and one Rangers’ championship, (1994).

In 1997, Marv won the coveted Curt Gowdy Award for broadcast excellence, bestowed by the Naismith Basketball Hall of Fame. In 2015, he was installed in the Sports Broadcasting Hall of Fame, a year after he earned similar honors from the National Sports Media Association.

Management should do what’s right, recognize Marv for fostering an inextricable bond with the Garden’s sports fans.

Albert deserves the distinction of having his name on either a ring of honor or on a commemorative banner that suspends from the rafters like the Lakers’ Chick Hearn, the Celts’ Johnny Most, the Suns’ Al McCoy and the Cavs’ Joe Tait.  A microphone should emblazon the permanent jersey that would bear his name.

In 1992, Marv was honored at halftime of a Knicks game for his years of dedication and in 1996, he joined MSG honorees in the Walk of Fame which includes the Garden’s longtime official photographer, George Kalinsky, former Ranger goalie Eddie Giacomin, the Grateful Dead and others.

Not enough, Marv’s as much a part of the Garden heritage as most of the  players he covered, extending from the old building to the new.

As such, Albert, 77, should join the likes of Walt Frazier, Earl Monroe, Willis Reed and other greats whose jerseys are displayed visibly inside the building. If there’s anyone who connected the accomplishments of these great players in the public’s eye and ear it’s Marv. He authored the soundtrack of much of Madison Square Garden’s wonderful history.

With the death yesterday of Don Newcombe, only 3 players are alive today from Vin Scully’s first year in 1950. Most notably is Carl Erskine. In addition there’s little used Joe Landrum (7 games) and Tommy Brown (48 games).

Orioles announcer Joe Angel is retiring after serving as a big league announcer for 42 years. He had all the required elements to make him entertaining; a pleasant voice, great rhythm, a relaxed tone, a nice storyteller, distinct, descriptive, an unpredictable stream of consciousness and colorful. You don’t need much more to be a successful baseball announcer.

His signature line was, “This one is in the win column.” Unfortunately, the news of his retirement is “in the loss column!”

Angel, 71, worked several markets, most notably Baltimore through two different stints, the first with Jon Miller. He was terrific in Miami as the first voice of the Marlins. He also did Giants, Twins and Yankees games.

Johnny Holliday has been the Voice of the Maryland Terrapins forever. He’s an old-school radio talent, although he’s also done television. He was a DJ for years, a morning man on WMAL Radio in Washington and the pre and post game host for the Washington Nationals telecasts. Johnny is now 81 and his voice and focus are still unshakable.

In 1963, Holliday was working in Cleveland radio while presiding over the public address microphone for the Cleveland Browns. On November 24th, the Sunday following the Friday assassination of President John Kennedy, the NFL played its full slate of games. The Browns were hosting the Dallas Cowboys. The country was angry at the very mention of Dallas because of what it represented, the city where the president was shot and killed. So Browns’ owner Art Modell ordered Holliday to refer to the team simply as ‘the Cowboys,’ nothing more. He was told not to utter Dallas. Modell didn’t want to arouse the grieving crowd. Holliday said he remained focused and never mentioned Dallas until the very last time he had to give the score.

On his basketball broadcasts, Holliday is saddled with Chris Knoche who won’t shut up. He disrespectfully jumps all over Holliday with no sensitivity to the fact that Holliday is in mid-sentence describing a play. Knoche coached American University and later did television work covering the Ivy League and other conferences. Apparently, Knoche never made the functional transition to radio. Don’t ever speak when the ball is in play unless you’re invited to by the play-by-play announcer. When I listened to the Terps-Wisconsin game several weeks ago, it was so bad I shut it off. I simply couldn’t follow the game.

Coach, this is radio, not television. Please!

The effect of betting on sports continues to make news. VSiN, the face of which is the esteemed Brent Musburger, is partnering with Sinclair broadcasting to produce and air Point Spread Weekly: Powered by Vegas Stats and Information Network. It will be on in Las Vegas Fridays at 11pm and in Reno at 11:30pm.  The show will also have encore episodes on Saturday mornings. Brent will host the show.

A’s announcer Ken Korach and San Francisco Chronicle writer Susan Slusser just completed a title,  If These Walls Could Talk which is part of the Triumph Series of Books. Ken says, “The theme is what people do in their jobs in baseball, and in our cases, how we approach our jobs as a beat writer and a broadcaster.” Korach wrote a book earlier on the beloved, cultured and colorful Bay Area sportscaster Bill King who covered the A’s, the Warriors and Raiders. King passed in 2005. The book is, Holy Toledo: Lessons from Bill King, Renaissance Man of the Mic.

Great bunch of items! First, Ken Korach is a friend, and I really look forward to this book. His book on King is really good. As for Johnny Holliday’s color man … I remember when ESPN Radio got the World Series in 1998, the radio voices were the Sunday Night Baseball announcers, Jon Miller and Joe Morgan. I listened, wondering how it would work. Morgan had never done radio so far as I know, but he got it–he laid back, and didn’t get in Miller’s way. As it should be on radio. When I was in grad school in NYC,… Read more »