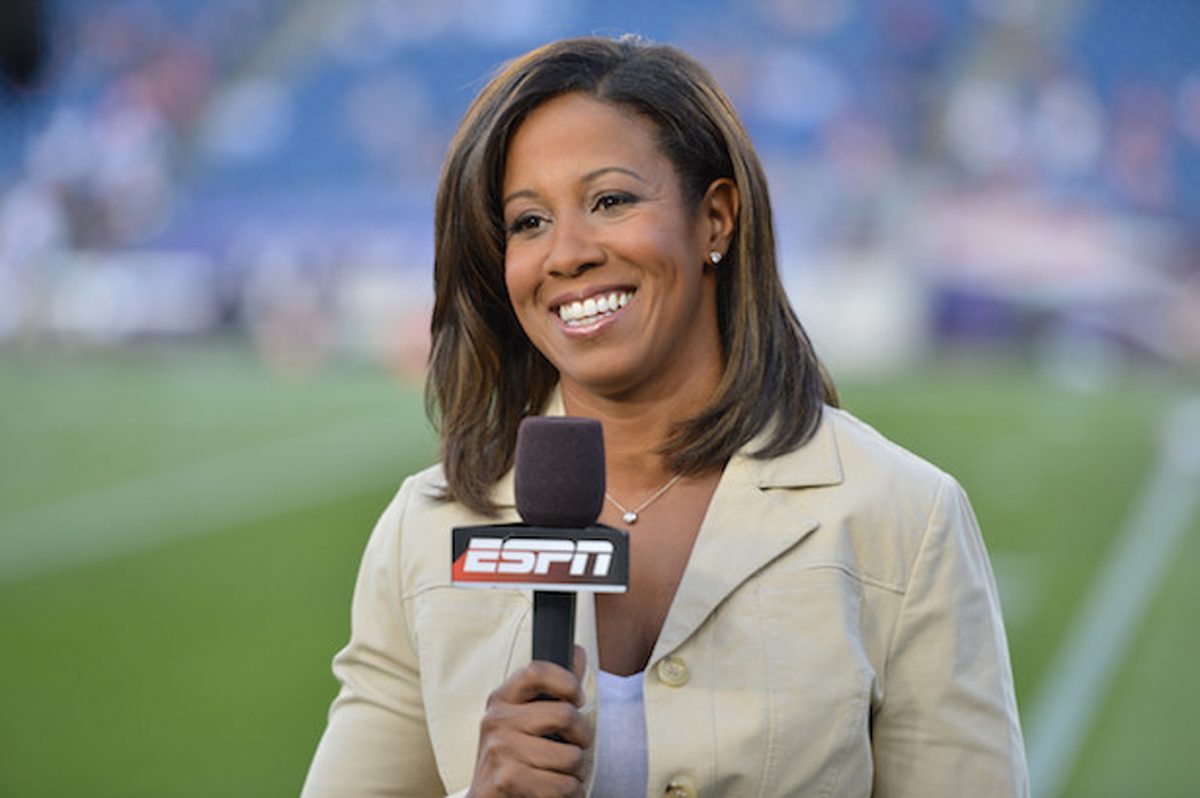 You see lots of Lisa Salters reporting from the sidelines, be it the NFL or the NBA. But here’s the funny thing. The ESPNer didn’t see herself there, not until she was well embarked into a career covering news.

Her early assignments as a news person, first at WBAL in Baltimore and later at ABC News in Los Angeles, took her to places near and far, covering everything from murders to plane crashes. But she then got an unsolicited and irresistible offer that turned her career from news to sports. We discussed the circumstances in our Q&A.

Lisa grew up in the Philly area and played DI college basketball for Penn State. She holds the distinction of being the shortest player in program history at 5’2″. She made the team as a walk-on.

Salters joined ESPN in 2000 when the network looked for journalists who had experience covering hard news. Five years later, she was assigned to the sidelines and has been a visible presence there since.

Lisa now makes Baltimore her home. That is when she is home, which isn’t often. Until this coronavirus hit, Lisa was on the road regularly from August when the NFL starts to June when the NBA ends.

Late last week she told me that she’s spending her unanticipated vacation at home with her son who turned seven on Saturday. With all the social distancing that the virus requires, Lisa says, “Making the birthday fun for him was a challenge. I allowed him to have three of his pals over.”

She hates this unwanted time off and misses her colleagues, the teams, the athletes, the coaches and the public relations staffs.

Salters added, “I miss watching the best competition in the world (the NBA). But this too shall pass.”

From your mouth to God’s ears.

Growing up in the Philadelphia area as you did, who were some of your broadcast idols?

I had only one. Lisa Thomas-Laury, a 38 year anchor at WPVI in Philadelphia. She was an African-American woman on television. I watched her and said to myself, ‘I can do that.’

So you got your degree at Penn State and pursued your career. Where did you start?

I never really wanted to do sports. I wanted to do news, to be a reporter. I went to work for a local TV station, WBAL in Baltimore, was recruited by ABC News and reassigned to Los Angeles.

How did you end up at ESPN?

At ABC’s LA bureau, I worked for David Eaton. One day David tells me that his father, Bob Eaton, would like me to work for ESPN. Bob was ESPN’s Senior Vice President and Managing Editor. Sports journalism wasn’t something I ever considered until this opportunity arose. The elder Eaton knew I was a sports fan but also knew that I had no sports experience per se. I guess David told him that when I would walk into the newsroom every day, I looked for the sports section of the newspaper.

It was 2000 and ESPN wasn’t looking for anyone who could just do runs, hits and errors. It wanted someone who could cover hard news and it knew I could help.

Did you interview under legendary studio head John Walsh and what was it like working for him?

I did but had little interaction with him. I was out doing what I was assigned to do.

What were some of your early assignments at ESPN?

I had covered the OJ Simpson I and II trials every day, and I covered the Oklahoma City bombing trial at ABC. So ESPN had me cover the Ray Lewis trial and other news related stories as a general news reporter. Eventually it changed but at the start, it was my thing.

When and how did your assignments turn sports-centric?

In 2005, ESPN’s Mark Shapiro asked me to work the sidelines when Michele Tafoya went on maternity leave. So I took over the NBA. The following year, 2006, ESPN developed a Saturday night primetime college football package for ABC and I was assigned as the reporter. The Saturday night package was positioned as a college version of the NFL’s Monday Night Football. It was high profile. Brent Musburger was the play-by-play voice. That’s when I began being identified as a sideline reporter.

What was it like working with Musburger, a bold, veteran and opinionated on-air voice? He was  different from many of the others who were about the brand; blending into the ESPN mystique, as opposed to developing their own individual identity?

Brent was always exciting, uplifting and encouraging. He was good to me. We had fun. I grew up listening to him so it was an honor to be part of his broadcast team. I felt the same way when I first started on the sideline as part of ABC’s NBA coverage. Al Michaels was doing the games. Al and Brent were both iconic. I thought of both experiences as privileges.

Brent and I connected because we both were brought up in the business through journalism. Those were my roots and they were Brent’s too. He was a writer and later an anchor in Los Angeles doing news. He appreciated and trusted my journalistic instincts. So when there was something outside the lines, he knew I would get to the bottom of it.

Was there someone at ESPN who you looked up to as a mentor?

Suzy Kolber was the first call I made once I was given a sideline role. I had never done it and she was one of the best. I also contacted Pam Oliver who’s now at Fox.

The pioneer Lesley Visser asserted on these pages that the sidelines are a dumping ground for females. How do you feel?

Well, it’s been a very good dumping ground for me! I’ve made a career of it and I appreciate that ESPN has afforded me the opportunity. I’ve made it my own. This will be my ninth season of Monday night NFL sidelines and as I understand it, no one in the past has done MNF for more than five years.

They’ve been rumblings of potential changes with MNF talent at ESPN. Are you okay going into the coming season?

There are never any assurances in our business. I continue to do the best I can and hope not to give management any reason not to have me back in the Monday role.

At what point in the game do you formulate the questions you’ll ask a winning coach or a star of the game?

If the game is going down to the wire, if it’s hanging in the balance, the questions are easy. It just happened. The questions are obvious. When it’s a blowout, I think about what I’ll ask at roughly the two minute warning.

Fans know you from the football field and the basketball court. What else have you done?

I covered the World Cup in South Korea in 2002. I was actually sent there because it was shortly after 9/11 and there were concerns of further attacks. So ESPN wanted a reporter there. But I also learned soccer quickly. I’ve also covered several Olympics. They’re demanding, require long hours and dealing with major time zone differences. Still, I found them stimulating whether they were in Italy, Greece or elsewhere.

On Turner, play-by-player Kevin Harlan and Allie LaForce will occasionally do a back and forth, more than the traditional, quick stand-alone report from the sideline.

That could be problematic, if I’m asked something to which I don’t have the answer. Best to be careful.

Penn State, do you remain engaged?

Yes, I initiated a scholarship for aspiring broadcasters. When I graduated in 1988, I never thought in my wildest dream that in 2016, I would be asked to be the commencement speaker.