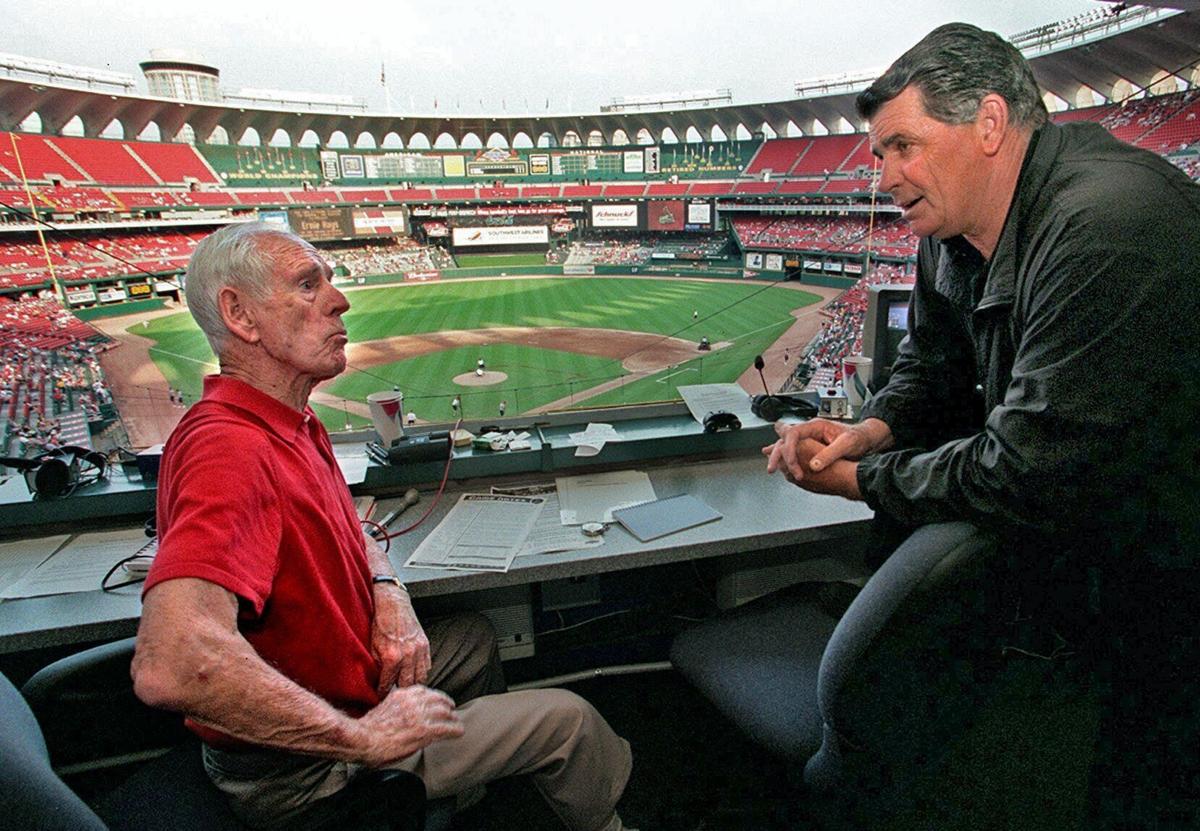 Mike Shannon (right) broke in under Jack Buck. Mike was a Cards' voice for some fifty years after playing for the Redbirds on 3 World Series teams.

Baseball is a summer’s game. Fans watch and listen leisurely. It’s not like Harwell, the Carays or Thompson who essentially had a job every day, and followed their ballclub.

Today, announcers might be scheduled for a handful of games, some more and others consistently, whether radio or TV.  Am I assigned to this series? Who am I working with? But fans might have expected Ken Korach last night for the Oakland game, the A’s lead radio voice. Yet he was somewhere else. Men and women work unpredictable schedules or don’t work at all. The beauty is the unique sound, one person, the same person all the time. In South Florida, Joe Angel and Dave O’Brien were the opening pair The duo eventually partnered on both TV and radio.

Are voices getting lazy? Losing their desire?  More likely it’s sharing mic responsibilities with others. It’s just too much I never know what I’ll get.

With the Dodgers on radio, Tim Neverett and Charlie Steiner work only select games, Joe Davis is not deplorably bad, he’s just okay. Steiner has a sonorous voice and Neverett is a little more folksy. I don’t count who does what but I know that Davis couldn’t kiss Scully’s backside. He’s just there and harmless. Joe knowns when to show up and how to leave, quietly. He’s also not very controversial.

To know that he’s doing the World Series for Fox makes me a bit concerned. Does he have the credentials? Do you not have Bob Costas phone number? Joe’s just duller than than watching grass grow.

Of the Giants’ voices in San Francisco, Jon Miller and Dave Flemming are two of the four. Duane Kuiper and Mike Krukow are battling some medical ailments and work intermittently. I don’t know the Prates announcers but I listened today to an inning or so on SiriusXm but didn’t recognize any of their names or voice. Maybe I was paying too much attention to the traffic. I know the announcers split radio and television in the Burgh. This poor fellow blew a play-by-play call at second place and I still don’t know what happened.

It reminded me of the great Scully who in 1950 under the tutelage of Red Barber, he listened to his mentor  call a triple-play simply and seamlessly. Vin said to himself, I’ll never be able to that.” I always thought that capsulizing a twisting hockey, basketball or football play, clearly was the most challenging to break down on radio It turns out that a triple play is most difficult. It requires a nimble lip, excellent anticipation and a sense of anticipation.

John Sterling never too an inning off, not one. He started suffering from a paucity of words when too many innings starting innings weighed on him. When he started napping on-air, gasping for words, loyal partner Suzan Waldman would have to at least figuratively give him a soft elbow in the ribs before he dozed off completely. Today, doubleheaders turn into an announcers’ gabfests. Too much for nine-inning guys like Yankee Johnny. But John finally got the message from his bosses and colleagues. So he’s now eventually headed to doing home games only. Best to him. He does put his heart into the broadcast.

The duo of Vin Scully and Jerry Doggett didn’t seem to ever miss a game unless they were severely ill. Vin’s national commitments for CBS’ football and later NBC baseball changed his priorities but understandably so. After completed those national assignments ended, Vin smartly paced himself.

Years ago, listening to baseball on a daily basis was part of the summer routine. In the 60s, America was still about AM radio only. Pick up powerful AM stations in the car and stick with them until the signal fades. Bob Costas talks about one of his early life experiences, traveling cross-country, east to west with his dad, first enjoying Bob Prince and Jim Woods in Pittsburgh, Jack Buck and Harry Caray in St. Louis, Vince Lloyd and Lou Boudreau in Chicago with the Cubs on his way from New York to California. Bob then shares what the experience was like heading to Southern California, crossing the highways built by Eisenhower. As he and dad dotted the country and crossed the Mississippi, the dulcet tone of Vin Scully began crackling out of the Costas car radio. At that point, the son knew what he wanted. Fifteen or so years later the country learned that he was a prodigy.

For baseball, durability is becoming a great challenge unless broadcasters cut back significantly. Lengths of games are irrepressible. Instead of being behind the mic for fewer than three hours, as was the case in the 60s and 70s, it’s often almost fifty percent more today.

Charter flights are great but arriving home from so many trips at 4am is awful, especially when you have to be back at the ballpark early the next day.

Still, there are those who are committed. Sterling was one but his draining effort made him suffer. The decision to cut back should end up being a blessing for all. There’s a patter developing. It’s easier to name those who are there consistently with a reasonable number of vacation games, Pat Hughes, Cubs; Tom Hamilton, Guardians; John Rooney, St. Louis Cardinals; Jack Corrigan, Colorado Rockies; Dave Wills and Andy Freed both get acclaim in Tampa Bay as do Charlie Slowes and Dave Jageler in Washington. There are others too who are behind the microphone significantly but don’t make a fuss about being taken off-air. As Dick Enberg said, “You’re renting the chair, you don’t own it.”)

Fellows like Bob Uecker in Milwaukee,  Steiner and Rick Monday in Los Angeles, Terry Smith in Anaheim with the Angels, the Mets’ Howie Rose and Joe Castiglione in Boston take off a limited number of games, pre determined.

It wasn’t until the late 1970s when cable TV encroached, and eventually all games were on somewhere, cable and later streaming hit our media vocabulary. It meant more games and more announcing opportunities. Finally, Brennaman, Nadel, Uecker, Matthews and a few others realized it too.

Marty told the story of doing a Reds game at Dodger Stadium and noticing that Vin wasn’t there. He teased Vin the next night and Vin replied, “I’ve noticed that they play the game whether or not I’m here.” In his next contract, Marty asked for a little time off. Don Drysdale had that in his contract when he joined the Dodgers upon Jerry Doggett’s retirement for the 1988 season–that he get maybe half a dozen nights off during the season, and he felt that Ross Porter should do the same. Red Barber didn’t make every road trip for the… Read more »