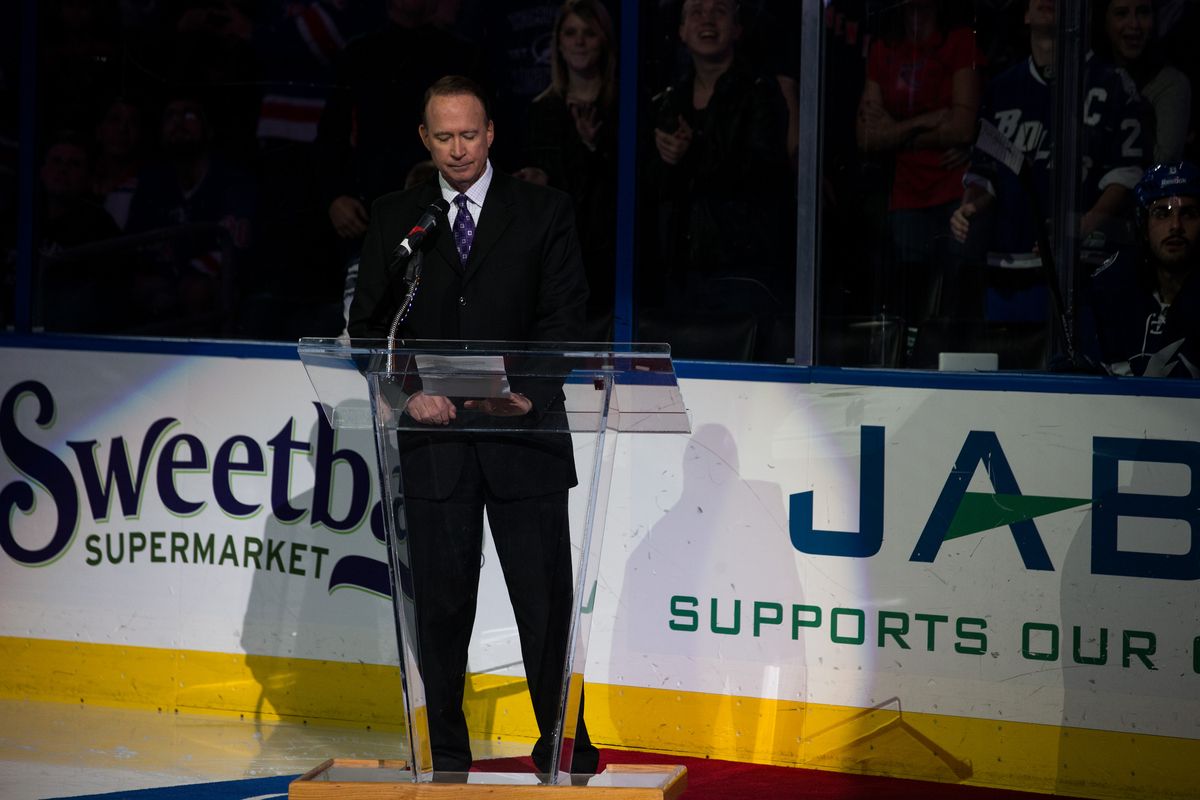 Retiring Tampa Bay Lightning Voice Rick Peckham has been selected the 2020 winner of the Foster Hewitt Award, bestowed by the Hockey Hall of Fame. This is his 24th and final season with the club. In all, he spent 42 years calling professional hockey.

Retiring Tampa Bay Lightning TV play-by-play announcer Rick Peckham has been announced as the winner of the 2020 Foster Hewitt Memorial Award, the Hockey Hall of Fame’s top honor for broadcasters.

Peckham, 65, grew up in the Dayton, Ohio area. He graduated from Kent State University in 1977 at a time when the school was churning out other announcers who would have lengthy careers in the NHL, including Steve Albert, Mike Fornes, and Paul Steigerwald. Immediately after graduating college, Peckham landed a job as the play-by-play announcer for the Rochester Americans, where he spent seven years, including the team’s Calder Cup championship season in 1983.

In 1984, after Fornes left Hartford for Washington, Peckham was hired as the television voice of the Whalers. His partners in the booth included former Whalers player and coach Don Blackburn, as well as Hockey Hall of Fame goaltender Gerry Cheevers. Peckham was very popular in Hartford, winning a New England Emmy in 1993. He also earned national reps with both ESPN and SportsChannel America, that included playoff games with the latter channel. Facing financial difficulties and relocation rumors that would eventually come to fruition, the Whalers did not renew his contract after the shortened 1994–95 season.

The TV play-by-play job in Tampa opened up late in the summer of 1995 when John Kelly left for the relocated Colorado franchise. Peckham was the one left standing at the end of the Lightning’s search, and he started his 24-season association with the Bolts that fall. His broadcast partners in Florida were Stanley Cup champions Bobby Taylor and Brian Engblom. Peckham won three local Emmys in his time with the Lightning, and started to call national games in 2007, both regular season and postseason, for Versus and later NBC.

Over the course of his career, Peckham also called college basketball, arena football, and both the NFL and NBA for ESPN International.

In today’s press release, NHL Broadcasters’ Association president Chuck Kaiton, who worked alongside Peckham in Hartford as the team’s radio voice, said “I have known Rick 36 years, since his days covering the Hartford Whalers. Rick has had a most distinguished broadcasting career, which deserves to be recognized by this honor. His longevity and excellence tell the story and passion for his profession came through each broadcast.”

In a statement release prior to this season, Peckham announced his plans to retire at the conclusion of the 2019–20 campaign . Although he has more left in the tank, he cited a desire to spend time with his family and do some traveling. Rick is very deserving of this award and it’s a great way to send him off into retirement. We can only hope that there is a Hockey Hall of Fame ceremony this year and he doesn’t have to wait another year to give his speech at the media luncheon.

The Lightning have not yet announced Peckham’s successor.

Tony Gallagher received the Elmer Ferguson Memorial Award for excellence in hockey journalism. Gallagher is the first writer to win the award for a body of work exclusive to the Vancouver market. He became one of hockey’s most influential voices in Western Canada in a career at The Province that spanned from 1970 – 2015.