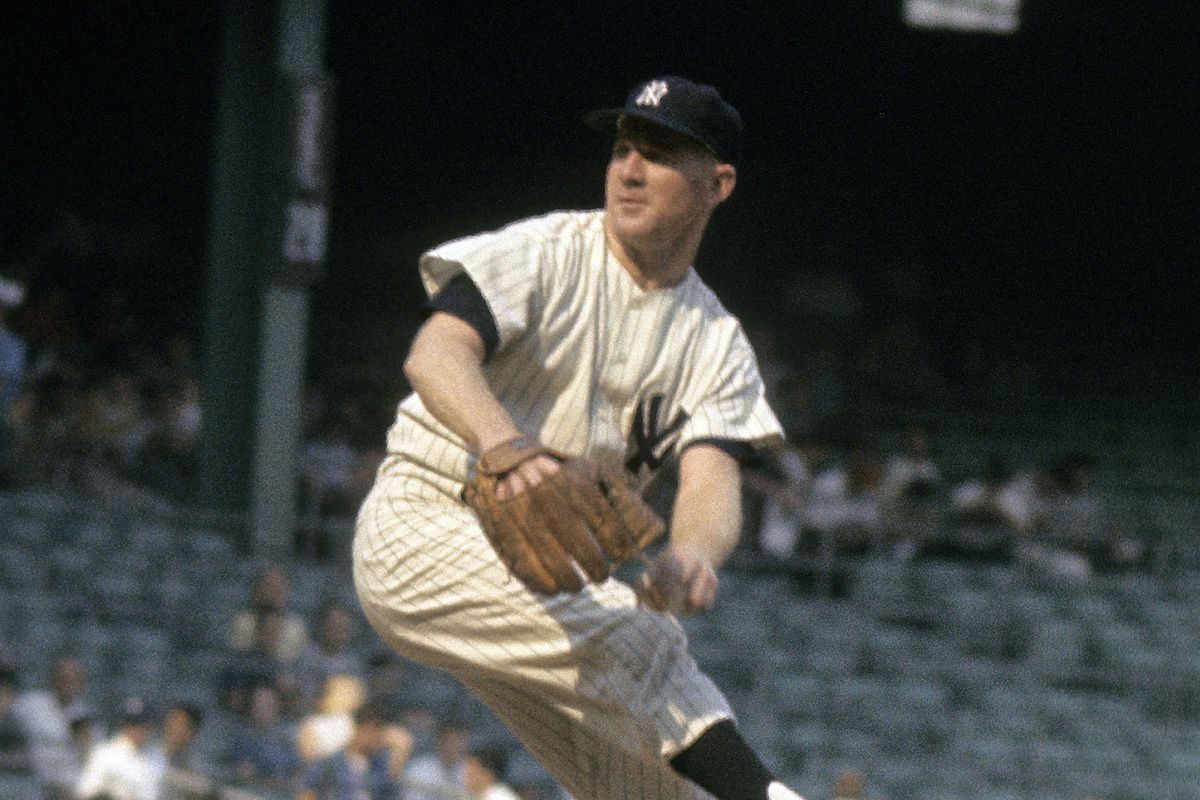 For nearly 20 years I would speak to Whitey Ford just about every couple of months. Lengthy conversations…laughs…memories.

My last conversation I guess-about three, maybe four years ago. His lovely wife Joannie answered the phone. We talked for a couple of minutes. She called out to Whitey, “Spencer’s on the phone.”
He picked up. Could tell he was happy to hear from me and off we went.

Around five minutes later I heard the phone drop. About ready to hang up when Joannie got back on the phone. She explained that he was happy to hear from me, but after a few minutes she confessed that it’s usual that he forgets who he’s talking to and what he’s doing.

That was the last time I spoke to my friend. I’m now left only with memories… all good ones. Ed”Whitey” Ford. Astoria Eddie…. “The Chairman of the Board.”

I once asked him if he ever mentioned to Sinatra that he too had that sobriquet. He laughed…”Never brought it up. If I did he most probably would have asked me and what board might you be the Chairman of? He had a warmth, a kindness to all and a remarkable sense of humor.

Can recount many, but I’ll tell you one that Joe Pepitone related to me. It was after the Yankees were swept by the Dodgers in the 1963 Series. Whitey lost the final game 2-1. A sunny Sunday afternoon in LA. Many fans dressed in white shirts.

Jim Gilliam hits a routine ground ball to third base. Fielded cleanly by Clete Boyer… a perfect throw to first base.. and then the problem. Pepitone never saw the baseball. He lost it in that sea of white shirts and it rolled down the right field line with Gilliam racing to third. Willie Davis followed with a sacrifice fly and that was it.

Joe said he sat by his locker after the game, still in uniform, head in his hands, in tears. He felt someone scratching his head. (Joe had a full head of hair back in those days…real hair.)

Looked up. It was Whitey. “Forget about it kid.” Joe told him can’t, I just cost us the World Series. Whitey smiled, “Joe that’s ridiculous. No way we were gonna beat this team with Koufax and Drysdale four straight.”
Joe says he received a call from Whitey a couple of weeks later wanting to know if he’d gotten over it. Said he was trying.

So Whitey invited him to his golf club to play a round of golf the following week. They had lunch and headed out to the course walking through the pro shop.

Whitey stopped, looked at a new set of left handed clubs, told Joe to pull out the driver and give it a feel.
Joe said nice. Whitey said they’re yours. It’s my gift. Joe said no way. Whitey persisted.

Slick won the argument and Pep played the round with his new set of clubs. Back in the clubhouse over a drink and many thank yous, Whitey explained to him why he gifted him the clubs.

“Joe, you’ve got around six weeks left of good weather up here. I want you to spend all that time playing 18 to 27 holes of golf at least five days a week. Then head down to Florida and do the same for the next three months.”

Joe listened and then asked the obvious question. “Why would I do that?” Whitey had the answer ready.
“Because by then you might be good enough to earn your PGA card and you’ll never be able to screw up another World Series game for me.”

I called Whitey the next day. He confirmed the story and added the look on Pep’s face was worth a lot more than those golf clubs cost me.”

Like I said… great sense of humor. Thanks for the memories “Slick.” What a fun ride you had.

Thanks for letting me visit.

**
Editor’s Note: This article was originally posted by Ross on his Facebook page. He granted this website permission to run it here. Ross, 80 and now retired, was one of the most versatile sports voices in New York history. He was at ease doing any sport, and doing them well! If baseball, football, basketball, hockey and harness racing weren’t enough, Spencer covered sports, and occasionally news, for WINS and WCBS, the two legendary all-news New York radio stations.
Share

Spencer Ross covered New York sports for half a century. He was the original radio voice of the Brooklyn Nets in 1967 when they were known as the New Jersey Americans, an original member of the American Basketball Association. Ross was also either a TV or radio voice of the Yankees, Jets, and other local teams. He's a Brooklyn native and an alum of Florida State University.

How great to see Spencer Ross here. And what a wonderful story about Whitey.

I thought of the story that Jane Leavy told in her marvelous biography of another left-hander, with the Dodgers. The Yankees were en route to Dodger Stadium, down 3-0 in the 1963 World Series, and Whitey said something like, “Isn’t there some sort of Jewish holiday so we don’t have to face him?” And Mickey said, “You mean Yom Koufax?”