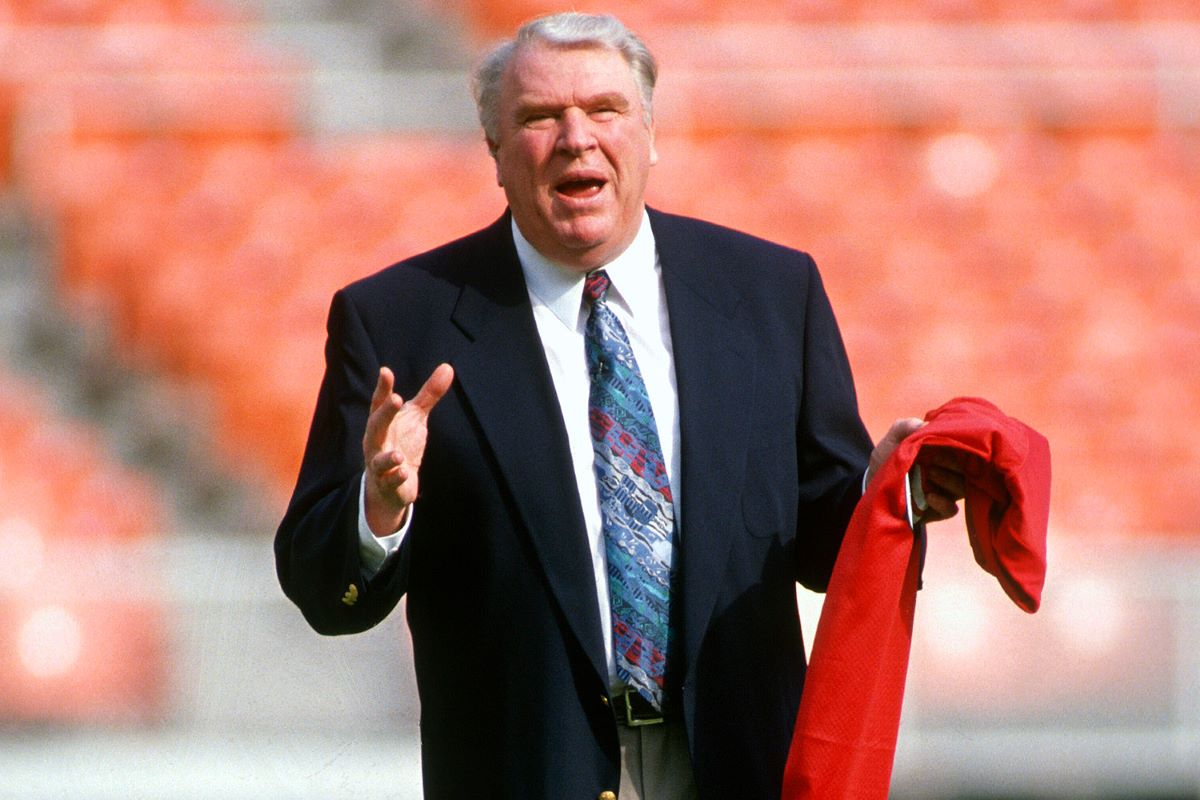 The world mourns the loss of 85 year old John Madden who passed last week. Here’s what the who’s who said over the weekend.

Madden was to the NFL what Dick Vitale was to college basketball, Hubie Brown to the NBA, Joe Garagiola to baseball or in a smaller way Barry Melrose to the NHL. They all added life, stimulating more interest in the games they covered.

Here’s what I got on my TV set Sunday:

Mourning Madden: At the start of Fox NFL Sunday, Curt Menefee opened the show discussing the somber week the NFL community has endured with the passing of John Madden. Menefee discussed his numerous impacts on the game, including coaching, broadcasting and the Madden NFL video game.

All Madden Documentary: To demonstrate his impact, the broadcast showed clips from the recent “All Madden” documentary, with John Madden himself reacting to the documentary in front of a Fox camera crew.

Final On-Air Moments: After watching the All-Madden documentary in front of a Fox camera crew, John Madden was very emotional. Hearing the thoughts of those who admire him, was a humbling experience for John.

The Drawing Board: While highlighting the key players to watch on Fox during pregame warmups, the Fox crew honored John Madden’s use of the telestrator by circling certain graphics when they otherwise wouldn’t do so.

Impactful Teacher: Members of the pregame crew highlighted how Madden made learning the pillars of football strategy, engaging with his electric personality and his passion for teaching inspired by his coaching.

A Legacy in the Silver and Black: Curt Menefee mentioned that for today’s game against the Indianapolis Colts, the Las Vegas Raiders would wear stickers on their helmets with initials JM to honor the coaches’ a Super Bowl winning coach in the Raiders organization.

Paying it Forward: Curt Menefee described how the Madden video game franchise has made a deep impact on the future generation of NFL players. Testimonials from former Madden cover athletes such as Lamar Jackson, Patrick Mahomes, and Brett Favre all demonstrated an appreciation and respect for what being on the cover means and how it was a dream come true for them. After the clip, Michael Strahan stated that even though he was never a cover athlete, he always enjoyed the honor of being present for press briefings before games and spending time with Madden during their preparation.

CBS Jim Nantz and Tony Romo “He was a gentle giant… You wanted to sit and listen to him and be in his presence.”

Moment of Silence: Before kickoff at Soldier Field and every NFL stadium this week  PA announcers at each game directed the audience in a moment of silence to honor John Madden and his impact on the game of football.

Madden the Architect: After Spero Dedes discussed the loss of John Madden, CBS Color Commentator Jay Feely discussed how John Madden and Pat Summerall’s transition of on field play to the broadcast booth was the blueprint on how athletes entered the world of broadcasting. Feely though should get the timeline and chronology in order. Madden was not the first coach to do color on TV. Hank Stram was way ahead of him.

Madden Montage: At the end of a commercial break before the Cardinals first offensive drive, the Fox broadcast showed a montage of John Madden’s greatest moments, including him being carried by his players after winning the Super Bowl as the Raiders head coach, and his declaration of “Football is my life.”

Still on our Screens: For the entirety of the first quarter, a graphic of John Madden that was used as the poster of the “All Madden” documentary was placed next to the NFL on Fox logo at the top right corner of the screen. Troy Aikman stated that he believes that this should remain on screen for the entirety of the game due to his great impact and what he means to the NFL.

Going to Canton: Segueing to a commercial break at the end of the first quarter, the Fox Broadcast showed a clip from the “All Madden” documentary of his reaction to finding out that he would be entering the Pro Football Hall of Fame in 2006. Joe Buck mentioned that his broadcast partner. Troy Aikman was in the same Hall of Fame Class. Aikman mentioned that his feet never left the ground that weekend, and that every time he spent time with Madden, he felt like he learned something.

Prescott’s Pregame: Fox sideline reporter Erin Andrews reported that Cowboys’ quarterback Dak Prescott does not think about the game of football without thinking of John Madden. The broadcast then showed a clip from Prescott’s pregame warmup, where he was wearing a John Madden shirt to show respect.

The Making of All Madden: Sideline reporter Tom Rinaldi in the third quarter discussed what it was like directing the “All Madden” documentary, saying that for him and co-director Joel Santos it was “a labor of love.” Rinaldi added that sending out 38 interview requests and them all coming back as a yes spoke volumes to the man that John Madden was and the impact he has had on so many people in the football landscape.

The Perfect Match: After a commercial break, the Fox broadcast showed classic clips that demonstrated the dynamic between John Madden and his partner in the booth Pat Summerall. Madden can be seen in one clip smiling from ear to ear when bantering with Pat, making them the perfect match for calling NFL action.

Man of the People: When asked what made John Madden so magnetic to so many people,

NBC color commentator expressed the fact that he was “a man of the people”, where he would often sit in hotel lobbies and tell stories to people that would go up to him. As more people gathered, he would get more enthusiastic and show more movement and raise his voice, not worried about how large a crowd would get.

Brees Meets Madden: Drew Brees recalled the first time he met John Madden in a production meeting for Sunday Night Football against the Dallas Cowboys, and the first thing he pointed out was that beyond him being a large figure, he had an even larger than life personality. Brees also mentioned that he was more interested in asking Madden questions than answering Madden’s, demonstrating his wisdom and willingness to give back.

Birth of “BOOM”: The Football Night in America broadcast showed a clip of where John Madden’s iconic “BOOM” call was first made in a game between the Saints and 49ers in 1979, where former Saints running back Chuck Muncie burst through a gap for a long run. Ironically, Tony Dungy was the defender trying to tackle Muncie, making him a part of the first “BOOM” call.

The Narrator: Football Night in America analyst Chris Simms recalled that John Madden felt like the narrator of his dad Phil Simms’ life when he was the quarterback of the New York Giants in the 80’s and 90’s. When Chris was a kid at a Saturday walkthrough for the Giants, Madden  invited Simms onto his cruiser, which was a very special moment from his childhood.

Madden the Advocate: Mike Florio recalled that when John Madden retired from NBC, he became an unpaid advisor to the NFL advocating for player safety. Florio details that it was Madden who fought tirelessly to ensure that any player who might have suffered a concussion be removed from play, even fighting to remove the three point stance to reduce helmet to helmet collisions.

Innovator in the Booth: Al Michaels in a tribute video recalled that Madden revolutionized color commentary when he entered the broadcast booth, noting that his style was often imitated, but never duplicated. Madden through his analysis made a complex game seem more accessible, understandable and entertaining for audiences.

Video Game Pioneer: Michaels in the same tribute video noted that Madden’s impact on teaching football to the next generation of fans through the Madden video game and how he worked alongside the developers to make sure the game was as realistic as possible and as close to the real on field product we see every Sunday.

The Cruiser: Al Michaels recalls that Madden’s fear of flying catalyzed his travelling around the country by bus, allowing him to meet thousands of people in every region of the country, getting to travel at his own pace.

More than Just a Football Mind: Michaels reminisces when he first met Madden 46 years ago and how their relationship evolved over dinners and reading the newspaper. Madden loved talking about geography, current events, food and life beyond the action on the gridiron. Michaels is a fan of maps. Think back to the OJ Simpson slow car chase. Al was like a tour guide on ABC.

Michaels Meets Madden: When Al Michaels first met John Madden in 1975 calling a regional game, they talked about football for about 5 minutes. Madden then transitioned into talking about one of his favorite Steinbeck novels, “Travels with Charley”, and how the character’s travels around the country inspired his retirement plans to travel the country in a motorhome.

6-2!: Cris Collinsworth reminisced about night before a preseason game when the whole Sunday Night crew was gathered, he asked Madden if he could talk to his two boys. Madden asked if they play football and what defense they run. After the kids responded saying they run a 6-2 defense, Madden gathered items from all around the room to talk football with Collinsworth’s boys, and he did not talk to anyone else at the party.

Lambeau Love: A clip was shown watching Madden follow a game at Lambeau Field and said that the Green Bay stadium was his favorite place to go to watch football. It was only fitting that Sunday night’s game was played at this historic ballpark.

First, this is a great article, and Mr. Tepper is on his way to a great career. A couple of notes. One is that Al Michaels never eats vegetables, thus the removal of the onions. Obviously, Al is the Keith Richards of sportscasting–he’s made of cast iron. The other is that I think Stram was the first successful broadcaster who had been a coach, and he had in common with Madden that he could explain the game in ways that we all could understand, though Madden was far better at it. For example, John Sauer had been a coach before… Read more »