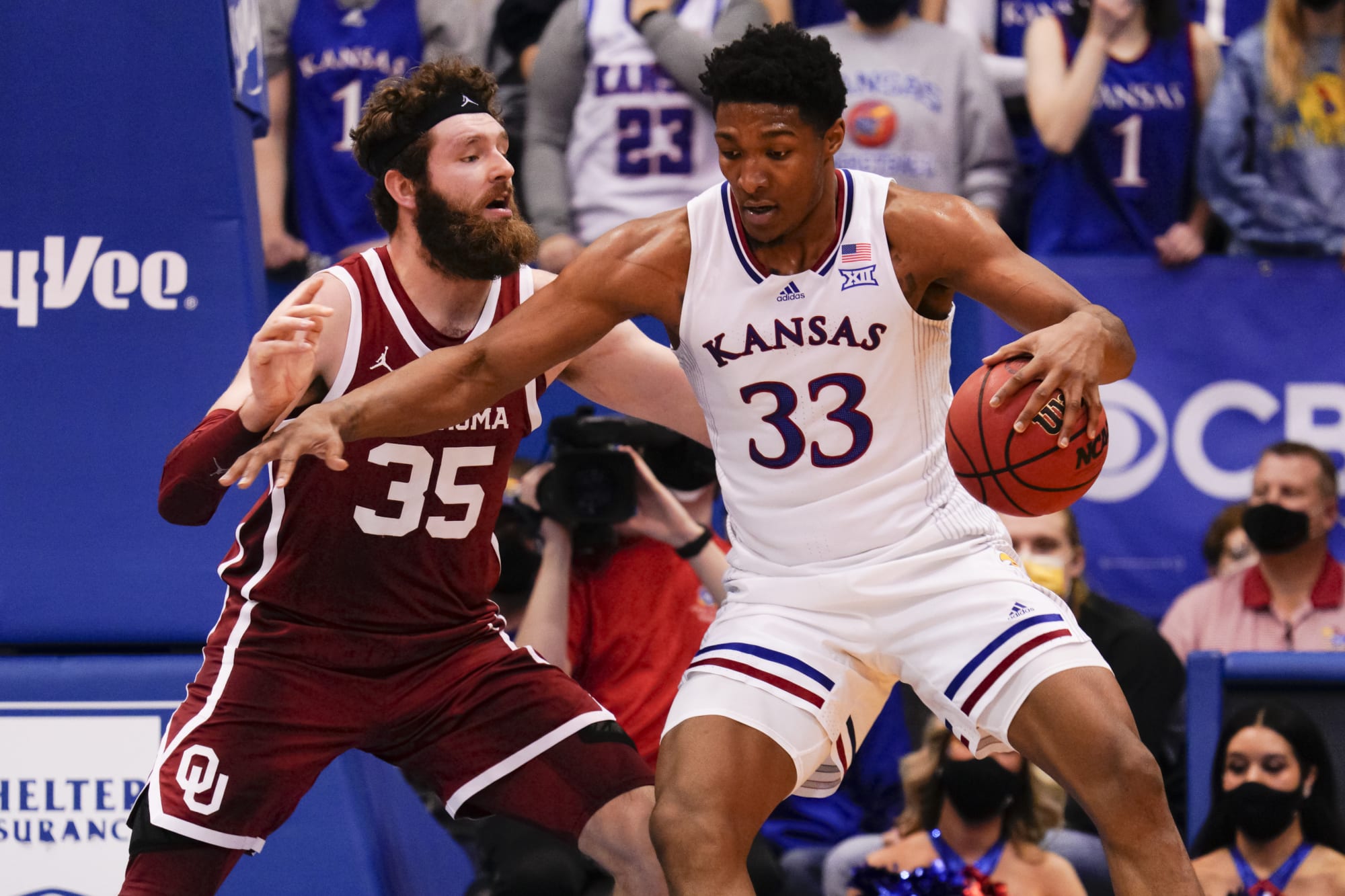 David McCormack of Kansas posts up Tenner Groves of Oklahoma earlier this month.

It’s March and college basketball lovers are asking, where did the regular season go?

If you haven’t taken a peek, the verve of college basketball is back and palpably so for the first time since the pandemic. Arenas feel alive. Buildings are filled with fans, the Division I landscape is filled with plenty of excitement and the NCAA Tournament is approaching. Perhaps no single day this season was better personified by the country’s eagerness for March than Saturday’s slate of games. All of the nation’s top six teams were each defeated; the first time this has occurred in men’s college basketball history!

March triggers us to look ahead to conference tournaments as a prelude to March Madness.

Perhaps there is no hotter team in college basketball than Duke. Coming off a convincing win at the Carrier Dome over Syracuse, the Blue Devils have played their best basketball of the campaign. The Devils’ potential top-five NBA Draft selection, Paolo Banchero, accompanied by other NBA prospects, A.J. Griffin and Wendell Moore have made this team difficult to stop, especially when it gets hot from the field.

The biggest storyline for the team, is the end of the unmatched coaching career of Mike Krzyzewski. After 42 seasons in Durham, Coach K has decided to retire. He’ll retire as arguably the greatest head coach in college basketball history. Much of the narrative in the media has centered around the idea of whether this talented team will be able to give Krzyzewski one last championship. It would be the equivalent of UCLA’s John Wooden winning his soiree at the 1975 NCAA championship over his one time assistant Denny Crum’s Louisville Cardinals. Wooden finished his career with a flourish, his tenth title. No one has come close since. So you can bet that Coach K will be the topic of discussion more times than not.

Gonzaga has been ranked first going into the tourney but the Bulldogs seem to get just so close each March or April and then can’t hit the summit. With such high expectations, broadcasters and analysts alike will focus on a theme, perhaps Gonzaga to gain redemption from its loss in the national championship game last year at the hands of the Baylor Bears.

Unlike the Blue Devils who play through their guards and wings, Gonzaga lives and dies by Drew Timme and Chet Holmgren who provide much of their offensive production. Its success notwithstanding, analysts ask the same question perennially. Is Gonzaga weakened by a relatively unchallenging schedule of league opponents in the West Coast Conference. Will the lack of strong conference competition hinder the Bulldogs’ ability to beat tougher opponents during the tournament, and do so in rapid succession – without fail.

The broadcaster details will be announced imminently. The lead crew will have Jim Nantz, 62, as its lead play-by-play voice. Nantz does the NFL through January and sometimes February, followed by golf, a conference tournament, early rounds of the tourney and the Final Four. The Master is his art. CBS and the Turner outlets make every game available! Jim took over the lead NCAA Tourney play-by-play chair after Brent Musburger wasn’t renewed on April 1, 1990.

Jim has the ability to weave in anecdotes seamlessly about players we know little. He loves this time of year. It doesn’t get better for one of the best.

And if you’ve never done it, working basketball with two analysts and giving each space is a tough task. Jim though will have a good duo by his side, Bill Raftery, 78 and Grant Hill, 49. Both color commentators have developed nice chemistry. Raf has helped Bill come around overall. The next best three who work through the regional finals are Kevin Harlan, Brian Anderson and Ian Eagle.

Turner and CBS are NCAA partners and Charles Barkley will sprinkle in some humor too. Chuck’s depth of knowledge of college hoops is limited but his silly mistakes usually trigger some laughs.

The SEC has seen its fair share of powerhouse basketball grow to the head of the table this year. Their dynamic duo of Jabari Smith and Walker Kessler have played prominent roles in much of Auburn’s success, but the Tigers’ momentum is beginning to fade. They’ve lost three straight on the road to Tennessee, Florida, and Arkansas, giving other teams in their conference like Kentucky a chance to start the SEC Tournament as the top team. The one team no one expected to be in the top five at this point are the Arizona Wildcats who now find themselves at number two in the nation.

The Final Four will be played in the dome in New Orleans, where there’s no shortage of food and partying!

Great job, and Nantz adapts very well to different analysts, as the good ones do.

I’m reminded of another significant thing, which I originally learned on this site: This will be the last NCAA final in the director’s chair for Bob Fishman, who pretty much invented the art form.