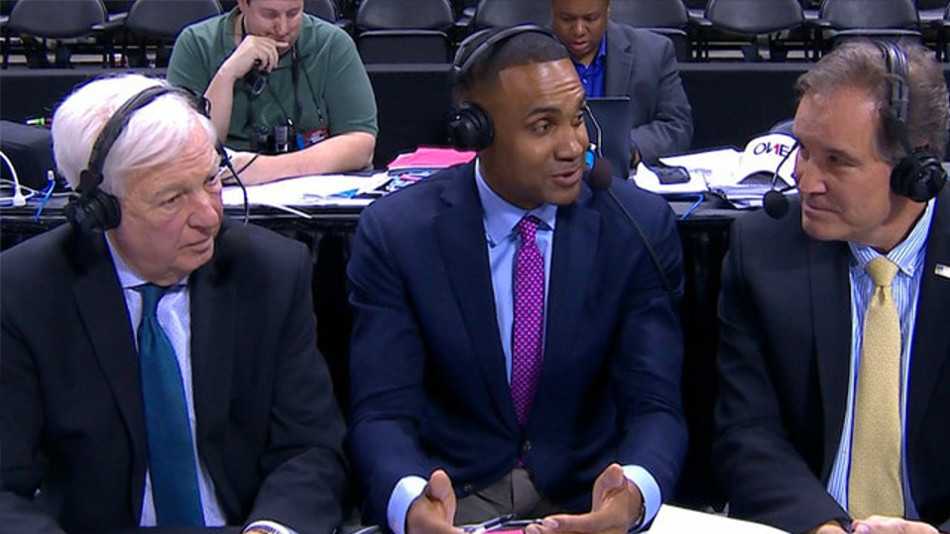 These are my thoughts on the network television and radio announcers covering March Madness:

Ratings of broadcast crews working regional weekend, one to four:

1. Jim Nantz, Bill Raftery and Grant Hill – Nantz economizes on his play-by-play verbiage and gives viewers time to breathe. He is also constantly aware that he’s the bandleader for partners Bill Raftery and Grant Hill. Both Raftery and Nantz have made Hill a better commentator; Nantz as the setup man and Raf by then engaging Hill. Grant is relaxed, delivers an occasional quip and adds some insight. Raftery is currently the best analyst in the college game because his commentary is distilled from a rich understanding of Xs and Os, popular Rafisms (‘the kiss’), genuine warmth and charming humor.

(2 Tie) Kevin Harlan, Reggie Miller and Dan Bonner – Harlan is often criticized for hollering. I’m not sure he’s screaming or just unable to temper his vocal enthusiasm when plays are less critical. Still, Kevin has redeeming qualities that have earned him top-notch assignments. He fondles his words dulcetly, presides over the microphone with a hearty friendliness and calls the game in pulsating fashion. He’s also mindful of the fact that he must clear runway for two partners, Reggie Miller and Dan Bonner. CBS/Turner smartly added Reggie to provide verbal heft; compensating for Bonner’s weakness assessing and projecting strategy. Dan’s comments can be shallow, off the stat sheet or based on pregame notes and interviews. Reggie provides the needed hardcore analysis, breaking down player strengths and assessing game flows. Together the three are a good listen.

(2 Tie) Brian Anderson and Chris Webber – Anderson is terrific and moves seamlessly from baseball to the NBA to college basketball. He’s at ease, his mellifluous voice is always in fine fettle and he doesn’t grate. Brian pauses properly to set up the big moment. Webber knows the game. For example, he immediately explained that Marques Townes’ huge open three in the waning seconds of Loyola’s Sweet 16 win was the result of a pick ‘n roll. Anderson then promptly noted that Townes was 6 of 26 on threes before he hit the big one. With much attention on Sister Jean, Brian pointed out too that the good nun had two brackets, one private and one public. The sister’s private one had Loyola losing in the Sweet 16. (In the regional finals, the win over Kansas State in the Elite Eight, Anderson and Webber began coronating Loyola a bit too soon. A 21 point Rambler lead was pared to 3 possessions with a minute or so to go. Both announcers might have been caught up in the hoopla.)

4. Ian Eagle and Jim Spanarkel. On color, Spanarkel is spot-on and plays well off Eagle. He’s understated, pertinent and rarely uses jargon that goes over the head of the typical fan. Eagle is bright and witty. His preparation and knowledge are unassailable. Ian’s issue is that he talks too much. Descriptions on television like a “diagonal pass” are redundant. There’s only one man on network television who gets away with a radio call, Mike Emrick. Ian and others should find old footage of Ray Scott. Known for football, Scott did basketball too.

One of CBS/Turner’s best moves a few tournaments ago was moving Clark Kellogg to the studio. Clark’s better speaking in generalities than he is reacting immediately as color commentators must do. He also works well with Kenny Smith and Charles Barkley. At halftime of Nevada-Loyola, Kellogg nicely summarized a Nevada trend during the first half. “They’re running too many isolation plays.” For viewers who might have missed the first half, it was a succinct and helpful observation.

Worthy of upgrades based on earlier work:

Play-by-Play: Brad Nessler – steady, doesn’t yak too much. Late in Houston-Michigan game, Brad pointed out that the Cougars weren’t guarding the Michigan inbound man in backcourt. It was an astute observation. Not doing so enabled an unguarded long pass and a crucial Michigan three pointer. Spero Dedes – talks in measured intervals. He also has a good feel for the game.

Bill Raftery: When officials agonized forever over an out of bounds replay in overtime of the Duke-Kansas regional final, Nantz, Hill and Raf’s patience started running thin. Nantz said: “At this point, I’d like any call.” Raf responded, “I’d like a call before last call!”

John Thompson was the best of the group’s color commentators. The frank ex-coach speaks his mind without stepping on the play-by-play announcer. Color commentators more often than not are extraneous on radio and share little of consequence. It’s a play-by-play medium. Fans searching for depth assessments are likely watching the telecast. Coach Thompson understands his role, picks his spots and makes it work. Instead of focusing on each play, he assesses flows. Such broader summarizations are a lot easier to digest on radio. Kelly Tripucka was a radio play-by-player’s nightmare, talking through and over plays. It made his broadcasts tough to follow.

The play-by-play announcers were generally solid at connecting the dots. It ended there.

Starting with the early rounds, many of the announcers didn’t recognize that on a national broadcast, few if any listeners know NCAA teams’ rosters. In other words, using names alone are useless. To that point, the team with the ball should be identified on each possession, not just players’ names. This is radio!

Too often, I found myself guessing which team had the ball. Listening to newcomer Ryan Radtke who was otherwise superb was occasionally frustrating for this very reason. He and other announcers always had the names of players scoring, rebounding or picking up a foul but would not identify their teams. Listening to him on the DII title game was exasperating. How would any listener know the roster of Ferris State? Teams and names on national college radio are critical.

A number of the play callers were also hard on the ears; screaming themselves weak for long stretches or to underscore inconsequential buckets. Disappointingly, this included lead play-by-play broadcaster Kevin Kugler.

More on the radio broadcasts from broadcast aficionado Barry Kipnis:

I am not thoroughly “invested” in the brackets and haven’t been following each team that closely, so maybe it’s only me that didn’t know what “UMBC” stood for.  I happened to tune in the WFAN during the last 3 1/2 minutes of their game versus Virginia.  Kevin Kugler was very enthusiastic as you would expect but I never once heard him say “The University of Maryland at Baltimore County.”  It was just either “UMBC” or “The Retrievers.” It wasn’t until I watched the TV replays later that I learned the name of the college.

I enjoyed reading this blog for the first time. Lots of great stories and excellent work on the Report Card. Appreciate you putting me on the email list for this blog!

Enjoyed the breakdown of some of the best voices in America.

David — Always appreciate your articles and insight. Thanks for your kindness.

Direct from UMBC folks…
We Are UMBC
*The full name of our institution is University of Maryland, Baltimore County
*We prefer to simply be called UMBC.
*Please use our full name only on first reference if you must use it at all.

Yes, I was going to point this out too. I do games in the America East conference is this is the edict from UMBC itself. Also, completely agree with the radio calls for someone lacking which team has the ball. One of the things I was taught early was to mention the team as much as possible that has possession. I guess it would be different if you were doing a local college or NBA broadcast.

You should have included Tom McCarthy in you radio announcers who “Holler”. Heard him on Westwood One. He screams everything just as he does on his Play By Play of Phillies games on Television. Every call even a “slow grounder to short” he screams like it’s a “walk off home-run”.