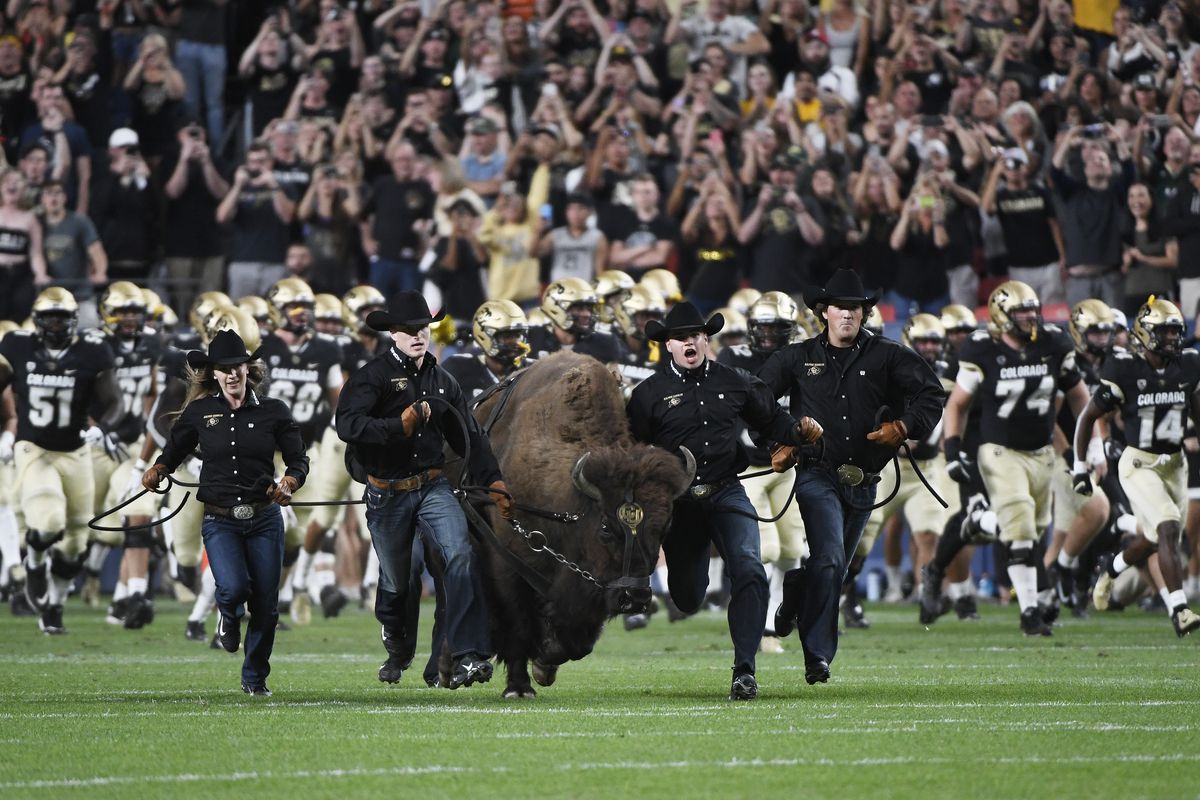 The Buffaloes - Colorado University Football and basketball. Mark Johnson calls their games. You can hear him a mile away even if he doesn't have a microphone. When longtime CU fans think of the “Voice of the Buffs,” there are two, legendary names, Denver broadcaster Larry Zimmer, 1971-2004, and Mark Johnson, who followed in Zimmer’s footsteps, begins his 19th year this fall.

Big-time play-by-play announcers can get full of themselves but Johnson is the furthest from cocky, says longtime sound engineer Shannon Scott who works with him, adding, “Mark takes criticism and grows from it. He’s humble, and respectfully interactive with any listener or any fan who comes up and wants to talk with him.”

Johnson also struggled during the passing of his father, who died by suicide. It likely has stuck to his ribs since. During his sophomore year, Johnson described himself as not being the most motivated student.

The point Johnson hammers home to young and budding journalists is the idea of preparation. While Johnson had already developed his sonorous sounds as a sophomore at Minot State, he didn’t focus sufficiently on preparation.

“I got up and made a speech,” Johnson reflected. “I’ll never forget the instructor. When I finished up, she said, ‘Mr. Johnson, you irritate the daylights out of me. You know why? Because you sounded so comfortable. But I can tell that you weren’t at all prepared. Your ability to get up there and do things extemporaneously is very impressive. But I’m giving you an F because I can tell, your preparation was not well-done from a research standpoint. From a performance standpoint, it was outstanding.’ She gave me an F though for the presentation, and I ended up getting a D-minus in speech.”

Johnson moved back home to after his sophomore year and did some radio work in what he called his “long-haired maggot infested, disc jockey days.” He then returned to University of North Dakota, who had Jim Bowman calling its games.

“Their old basketball arena, Hislop Sports Center, had a photo up in one of the concourses,” Head coach Bill Fitch, assistant coach Jimmy Rogers, and the star player, Phil Jackson.” Three NBA names, very accomplished who trace their roots to the University of North Dakota.

Johnson took the same speech class at UND, albeit with a different instructor from the one he had at Minot State and got an A. Johnson was able to compile a 3.9 GPA in the second half of his college career. And he certainly proved that he didn’t need a class in homiletics. But getting chewed out by his sophomore speech teacher taught Johnson the importance of preparing for anything he was going to embark upon in life.

“I did actually think about tracking her down and going, ‘Hey, by the way, thank you for that. That was a great lesson.’”

After graduating from North Dakota, Johnson knew that if he wanted to get better at his craft, he would need to look at himself objectively. He wanted the feedback from the best of professional broadcast voices, including the Royals’ Denny Matthews, 54 years in KC; and the always dulcet toned, Ernie Harwell, four decades with the Tigers. “I wanted honest opinions,” Johnson says.

The young broadcaster strengthened his work ethic, developed  his broadcast resence, called high school games in Fargo, while he was still in college and started building a family. Then it was onto a radio gig in West Lafayette, Indiana. It gave him the opportunity to be around the Purdue Boilermakers basketball team, coached by Gene Keady.

It made Johnson wonder, “How do they act? What do they do? How do they conduct themselves in press conferences. I sat, watched and just ate it up. I was only 24 years old and was influenced by what I saw and heard.

Johnson was able to use the experience to land a gig, calling football and basketball games at Illinois State from 1998-2001 football seasons, It got him more airtime in cities like Chicago and St. Louis.

When the Syracuse job opened, he said to himself, I’m not a Syracuse grad! They’re not going to give that job to someone outside the Syracuse family. Mark though was encouraged by his wife to apply for the prestigious position, Big East, great rivalries with Georgetown and Villanova, 30,000 or more at the Dome. He created a CD of his clips. In a box that he sent to Syracuse. He included plastic oranges.

He got an interview, still thinking that there was not a chance for the Orange job, being outside the SU family. The first question he asked the committee that interviewed him was, “Is this a real interview?” “It just came out of my mouth. I’m thinking ‘That was a stupid question.’ They said, ‘Well, of course it is (a real interview).’”

Afterwards, Mark said there was dead silence in the room. The head of the committee responded, laughing, ‘That is a great question. This is a legit interview. You wouldn’t be here if it wasn’t.’” 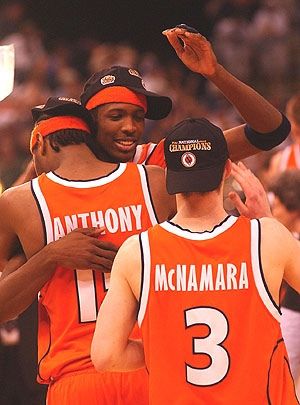 As he arrived at the airport to leave Syracuse, Johnson was told there would be an offer sheet in the next day or two. He took the job but was still shocked that he beat out all the candidates that had “Syracuse University” on their resume. The school is known as a spawning ground for broadcasters, Think Marv Albert , Mike Tirico, Dick Stockton and many others.

Later, Johnson said he felt some tension about not being a Syracuse graduate when he stepped foot on campus. Six months later, April 7th 2003, Mark called Syracuse’s only NCAA Tournament championship, a victory over Kansas, 81-78 at the Superdome in New Orleans.

In the fall of 2003, Johnson caught the eye of the higher-ups at KOA radio in Denver and had the opportunity to call a few Broncos games that season. A year later, Syracuse played play the first weekend of the NCAA Tournament in Denver. There, he rekindled the relationship he had already built with the people at KOA. They asked him to come on their radio show for 10-15 minutes after one of the Syracuse games he called. That 15-minute segment turned into a two-hour segment for Johnson. Because of it, he got a call from the general manager who sounded like this:

“Hi, would you ever think about moving to Denver?” Johnson recollected. “I’m like, ‘you’re darn right I would.’ I always loved the west and the mountains. All that! I’m involved with hunting fishing and horseback riding, it was a natural fit for me.”

Because of this call, Johnson had a decision to make — stay in upstate New York and call Syracuse games, or fill the big shoes left by Voice of the Buffs Larry Zimmer and become the new voice of the Colorado Buffalos.

It was not an easy decision for Johnson and the clan because his family loved living in upstate New York. But the position of Sports Director at KOA offered full health benefits opposed to his current position at Syracuse which was classified as contract work.

Family has always put family first in any decision Johnson made. Mark and his wife of 30 years, Susan, have three children: Nicolas, 30, Halle, 28, and Jacob, 25. Mark and his wife refer to Jacob as their “forever child,” because he is multiply disabled. Susan serves as Jacob’s Certified Nurse’s Assistant. Whenever Mark has a speaking engagement, he always goes with both Susan and Jacob. In any career move Johnson has made, he has had to think about how it would affect Jacob.

“We took a little bit of a chance for those two years we moved out there to Syracuse knowing we did not have the full set of benefits. We praise God we were able to fight through that and made it work. It turned out to be a wonderful deal (calling Syracuse games).”