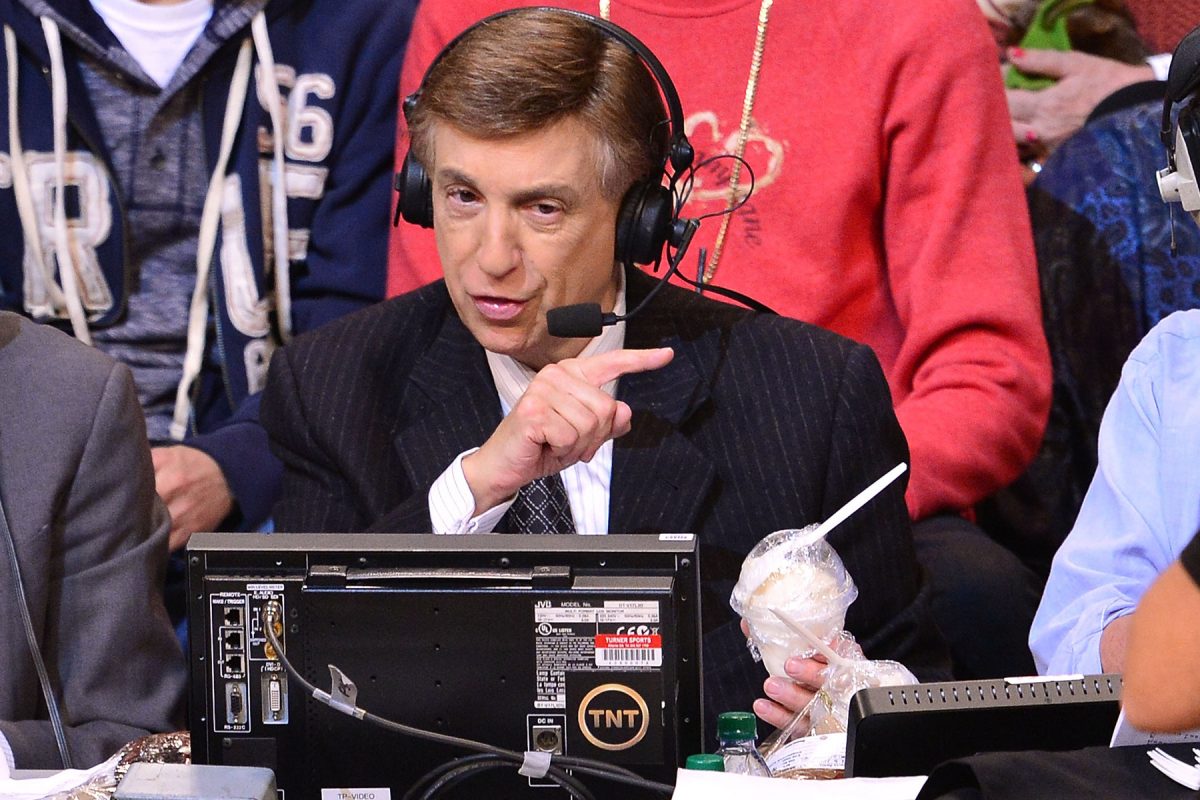 Marv Albert’s career started when he was a teen in the late 1950s shadowing his idol, broadcaster Marty Glickman. He’d spend time with him in the radio studio of the station for which Marty worked, he’d do stats for him, write scripts and watch him narrate sports highlights for Paramount Newsreels which was popular in movie theaters until television sprouted. Marv also considers the creative and energetic Les Keiter as one of his broadcast role models. Albert’s close to sixty year career ended in Atlanta on July 3, 2021 when the Milwaukee Bucks defeated the Hawks in six games in the Eastern Conference Finals.

At age 80, Marv signed off, telling  viewers, “I wish I can start all over again.” Don’t we all? Father time catches up with all of us.

Marvin Philip Aufrichtig was born on June 12, 1941 and raised in Brooklyn, first in Brighton Beach and later in Manhattan Beach. According to ancestral sites, Marv’s  paternal grandfather, Nathan Naftali Aufrichtig was born in 1887, in Glogow, which is now in western Poland. Nathan and his family emigrated to America in 1890. Marv’s father, Max Aufrichtig, born in the U.S., changed the family name to Albert in the early 60s. Mother Alida traces her roots through Budapest in Hungary. Max and a brother ran a grocery store in Brighton Beach.

Becomes Knicks’ ball boy; Falls in love with the fast-paced broadcasts of legendary Marty Glickman and Les Keiter; Cultivates a relationship with the always helpful Glickman who took him under his wing 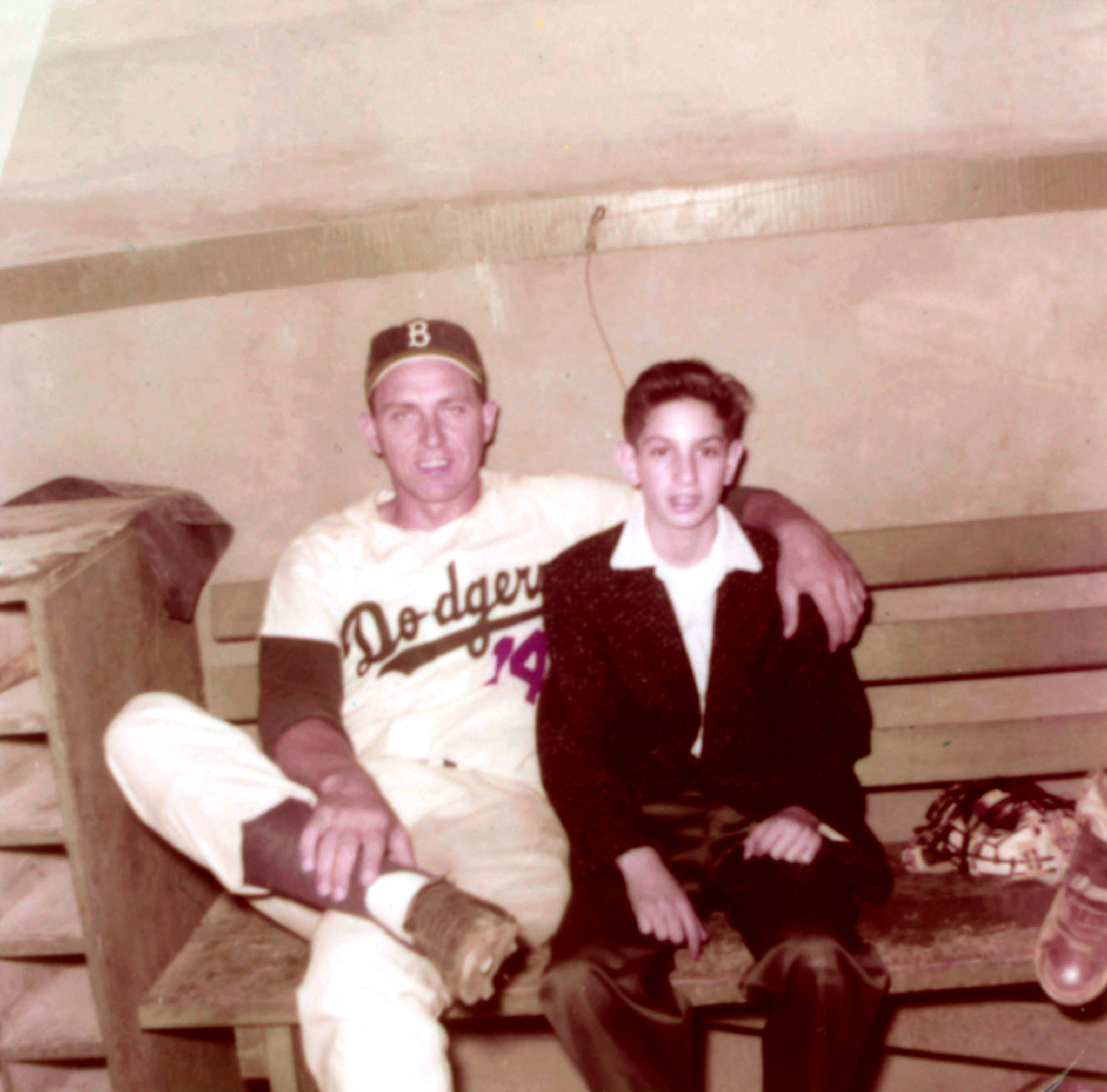 Works as a summer office boy for the Brooklyn Dodgers doing busy-work of all sorts. That season, the team’s last in Brooklyn, the Dodgers played a handful of games at Roosevelt Stadium in Jersey City. Marv would take the rails (called the Tubes in the New York area) to shuttle between the two sites, delivering this and that. Marv would use his reel-to-reel tape recorder at Ebbets Field to get his reps doing baseball. (with Gil Hodges, left)

Heads for Syracuse University where he gets to call SU sports on the student station; He also does Syracuse Chiefs baseball home games live and recreates road games

Leaves Syracuse after his junior year

Does his first football game on Thanksgiving Day between two high schools in the New York area. Game is carried by a station with a weak signal, WJRZ. He would say in his autobiography Yesss!, “I was terrible”; Marv would then do a series of high-school games on a Long Island radio station

At age 21 on January 27th, he substitutes for Glickman broadcasting his first NBA game, Knicks-Celtics at Boston Garden; The NBA wasn’t very big then, WCBS, New York, ran the broadcast on a one-hour delay so it could air classical music, a show sponsored by Texaco

On March 14th, he fills in for Jim Gordon, doing first his NHL game, Rangers at Detroit

Gets his college degree from New York University

Working for WHN, he does sports updates and in-time hot-stove league shows in baseball’s off-season, baseball recreations during tight pennant races for which he used sound-effects for simulating things like the crack of the bat. Some of these tools were given to him by Keiter who years earlier on New York’s WINS, popularly recreated SF Giants games

Becomes Rangers’ voice in an odd package; Station would carry only Sunday night home games, limited to the last five minutes of the first and second period and all of the third

WHN agrees to take a fuller package of Knicks and Rangers games; Don Criqui gets the Knicks assignment and Marv continues with the Rangers

Becomes Knicks’s radio voice; When hired, he jumps for joy

Broadcasts a game on New York Radio when Bill Russell was matched up against Wilt Chamberlain in the Eastern Conference Finals, Boston at Philadelphia

With limited TV coverage, particularly of home games, and the fact that the Knicks were vying for their first NBA title, his pulsating radio calls become appointment listening; Game seven of the title series against the Lakers, won by the Knicks on May 8th, turns into an epochal broadcast on Marv’s resume; His popularity balloons in lockstep with the team’s success, He had no analyst, calling games solo

Gets his first national assignment, calling Army football on an ad-hoc network, heard in New York on non-commercial, WNYC Radio

Marv gets the Giants gig on WNEW Radio when mentor Glickman moves from the Giants to the Jets. Glickman spends considerable time with Marv, giving him pointers on broadcasting football

Hired by WNBC TV, Channel 4, New York, as its sports anchor for the 6 and 11pm news, remains with the station until 1987

Brother Steve, 25 at the time, is hired as the television voice of the New Jersey Nets

Joins NBC Sports and begins his NFL work; Over the next half-dozen years, he would have an assortment of analysts 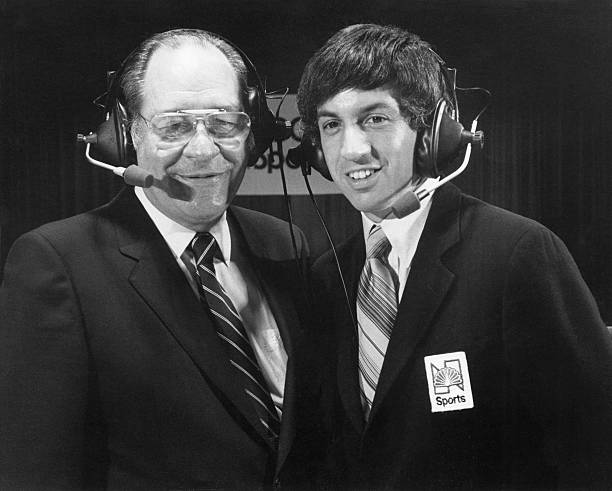 Continues Knicks and Rangers radio schedule and begins calling Knicks games on television for the first time, on WOR-TV, Channel 9

Albert is promoted to the second NFL team behind Dick Enberg and Merlin Olsen. In later years, Don Criqui or Charlie Jones would be designated the number two play-by-player. From 1992 through the beginning of the 1997 season, Albert was again the network’s number two NFL announcer. He left NBC following week #3 of the ’97 NFL season, after pleading guilty to a sexual assault charge

It’s the 25th anniversary of his appointment as the Knicks announcer, He’s honored by Madison Square Garden at halftime of a Knicks-Bulls game; Marv requests the popular WFAN duo of Mike Francesa and Chris Russo as his presenters

Calls Rangers championship on local radio, the team’s first Stanley cup in 55 seasons, It would be the last NHL game he’d broadcast

Pleads guilty to a misdemeanor of a sexual assault, causing a staggering downfall of a beloved public figure; Let go by both employers, MSG and NBC

Reaches out often to Marty Glickman, 80 then, using his longtime mentor as a sounding board during a difficult period in which he was sidelined from broadcasting

Does his last of nine NBA Finals, tying at the time, Dick Stockton

Not renewed by MSG, for being critical of Knicks and demanding a high salary

Steps down from CBS’ NFL telecasts

Announces his retirement as his 80th birthday approaches

For TNT, he calls Knicks-Atlanta playoff series, doing his last event at Madison Square Garden but is given the cold-shoulder by MSG management which refused to publicly recognize him during the game. Marv and MSG CEO Jimmy Dolan have had a contentious history