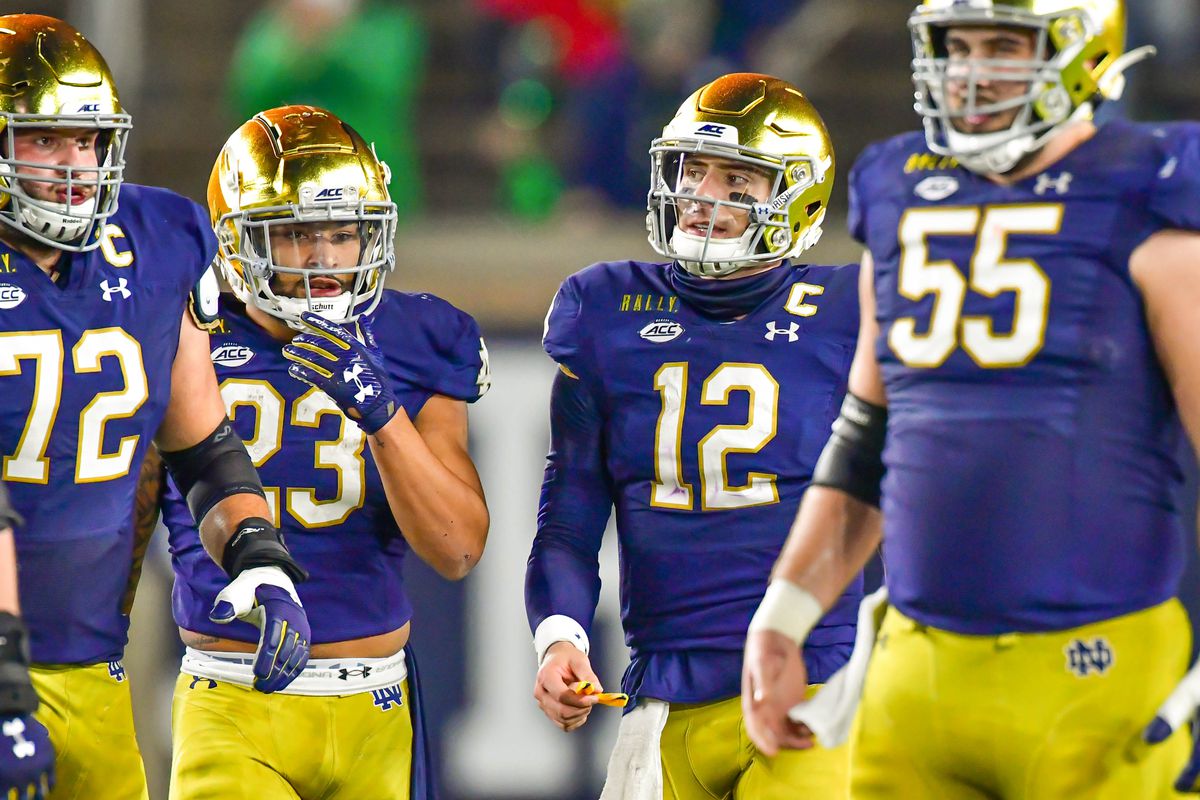 ND pulled the upset over Clemson last Saturday. But the final minutes and the overtimes seemed terminal because of unending replays.

Week #10 of the college football season brought no shortage of wild storylines and exhilarating last-minute finishes. It was also a week of ongoing frustration for the twenty FBS programs forced to postpone or cancel games, some for the second consecutive week.

Sports media voices brought no shortage of reactions to the week’s craziest storylines, including the noticeably poor replay officiating at the end of Clemson vs. Notre Dame, the impacts of ten games being cancelled and Notre Dame fans storming the field after securing an upset victory in prime time.

With ten games being cancelled last weekend, programs around the country are holding their breath as strict contract tracing and COVID testing requirements continue to create scheduling difficulties across all conferences. Last week’s impacted games included Purdue at Wisconsin, Louisville at Virginia, Air Force at Army, Tulsa at Navy, Washington at California and Arizona at Utah.

With seven games already canceled or postponed this weekend, including Texas A&M at Tennessee, Ohio State at Maryland, and the big rematch Alabama at LSU, members of the media weighed in on how the competitive balance of the 2020 season is being threatened and how COVID could impact the college football playoff.

Dodd addressed all the possibilities and potential issues with competitive balance and CFP scheduling as COVID cases continue to rise in multiple top-25 programs.

“We now know what massive cancellations/postponements look like. We know what it looks like for a team to be missing its best player due to COVID-19 (Clemson and Trevor Lawrence). Should we just assume these threats are going to subside in time for the CFP semifinals on Jan. 1 and national championship on Jan. 11?

“Imagine if one of the four participants can’t go because of a rash of COVID-19 positives three days before the semifinals. The closer we get, the more likely that scenario becomes.”

Dodd also suggested that the CFP committee may want to consider a bubble format for its three games in January.

“Flying teams into New Orleans (Sugar Bowl) and Los Angeles (Rose Bowl) for the semifinals doesn’t seem wise at the moment. It may want to consider a central location like Glendale, Arizona, where all three games could be played at State Farm Stadium. There is at least one hotel within walking distance of the stadium that could theoretically seal the players in a bubble.

Week #10’s 2OT prime time thriller between Clemson and Notre Dame was full of noticeably poor officiating and painfully long replay reviews towards the end of regulation. Sports media voices took to Twitter during the game to voice frustrations about the ridiculous number of reviews and blown calls by the officiating crew.

“Replay officials sucking the life out of the game. All for a 2-yard catch.”

“If all these favorable replay reviews are the ACC’s not-so-subtle way of telling Notre Dame to stay after this season, they might be working.”

“These replay reviews are ruining college football. It’s killing the momentum of this Clemson-Notre Dame game.”

After Notre Dame’s 2OT upset, the craziness began in South Bend. Thousands of fans stormed the field, immediately raising concerns about COVID-19 as cases continue to spike across the country and on the Notre Dame campus.

As fans poured onto the field, NBC’s Mike Tirico said “in the midst of a pandemic, there is pandemonium.”

The moment was especially bizarre considering that Clemson quarterback Trevor Lawrence was absent from the game for a second consecutive week after testing positive for COVID. NBC’s cameras showed Lawrence on the sidelines in an N95 mask multiple times throughout the broadcast, discussing how his absence could impact the outcome of the game. After watching the top-ranked team in the country lose without its starting quarterback, it was baffling to see the situation in South Bend get so out of control.

Here’s what the media had to say about the on-field celebration.

Witz covered the aftermath of the celebration for The Times, raising an interesting point about how the bulk of the risk for universities with active college football programs may actually come from student spectators.

“As games become more meaningful and the virus shows signs of accelerating, the pertinent question in bars, dormitories, tailgating lots and stadiums may not be how to mitigate the risk from playing college football. It may be how to remove the risk from watching it.”

“Game? Great. Postgame celebration by Notre Dame students? Not great. If you are the Notre Dame administration, shouldn’t you have had a plan in place to avoid this?”

“The Notre Dame celebration is quite disturbing to watch in the middle of a pandemic.”