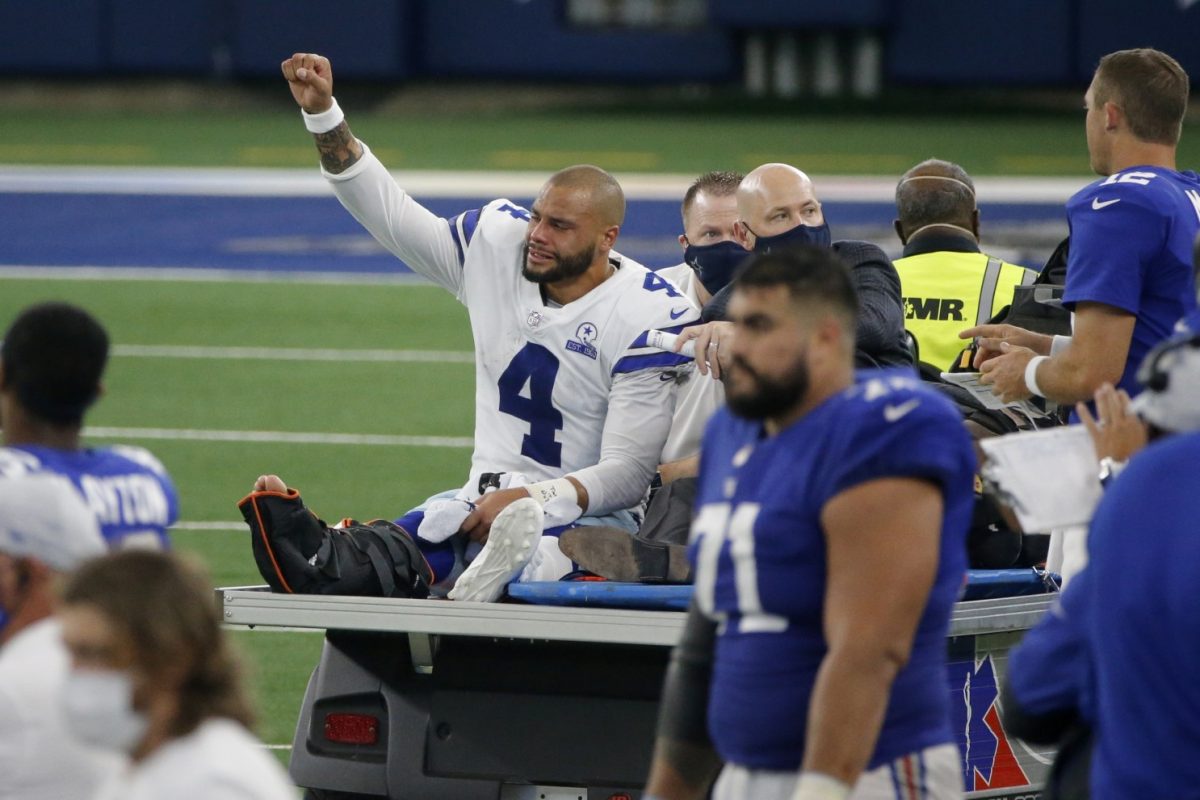 The 2020 NFL season has had no shortage of wild storylines and high-impact injuries, and week #5 was certainly no exception. After an action-packed week of games, two headlines dominated: Dak Prescott’s season-ending ankle injury and the ongoing disruptions of the league’s schedule due to positive COVID cases in multiple organizations.

During Sunday’s game against the Giants, Prescott suffered a gruesome ankle injury after landing awkwardly trying to gain first-down yardage. Tony Romo originally reacted on-air saying, “You almost got to hope it’s a cramp.” Unfortunately, after CBS zoomed in on the injury, it was immediately clear that Prescott’s ankle had completely snapped out of place. News of the injury immediately set the sports media ablaze with reactions, prayers, and discussions of the implications for the Cowboys and Prescott’s future.

Contract negotiations between Prescott and the Cowboys dragged on throughout the offseason, ending with no long-term deal in place. Dallas wanted to sign Dak to a five-year deal, but he sought a shorter four-year deal so he could reach free agency sooner. Ultimately, Dallas ended up franchise tagging Prescott for the 2020 season, pushing off negotiations for another year. The season-ending injury will likely complicate how negotiations between the two sides go in 2021, and many members of the media weighed in with their best guesses on how things will play out.

Wetzel laid out the three most likely scenarios for negotiations between Dak and the Cowboys: the two sides reach a long-term agreement in March, Jerry Jones hits Prescott with another franchise tag, or the team decides to allow offers from other organizations.

“If Prescott becomes a free agent, there will be no lack of suitors for a 27-year-old who was putting up career numbers in 2020 — a 68 percent completion rating, 1,856 yards and nine touchdowns (against four interceptions). He also rushed for three touchdowns.

“Dallas would be allowed to match any offer, but Prescott would find a hungry market that might be happy to overpay for him. It’s not just his on-field play that is enticing to other teams.”

Wetzel also pointed out that as devastating as the injury was, the number of teams currently struggling with their quarterback situation means that Prescott’s talents and leadership qualities will be valued at a high price no matter where he ends up.

“He is the definition of a franchise quarterback. He’s a true leader in the locker room and community, a big star who can excite fans, and a respected player across the league who might cause free agents to follow him,” Wetzel added.

Iyer argued that Prescott’s injury should only do positive things for his chances at a long-term extension with Dallas, citing his impeccable play to start the 2020 season and the intangible qualities he brings to the team.

“Beyond his stellar, prolific play to start this season before going down, Dallas saw his worth first-hand in witnessing the emotional reaction to his third-quarter misfortune against the Giants.

“Prescott was playing at an MVP level with his gaudy passing and rushing numbers, all of which were needed to give the Cowboys (2-3) a chance to win all five of their games, with their terrible defense costing them in their three losses. But it is his intangibles as the face of the franchise — leadership, positive attitude and utmost respect from team officials and teammates alike — that make him invaluable.”

Florio suggested that the best way for the Cowboys to assess Prescott’s worth is to let him test free agency, a high-risk situation for both parties.

“Really, the best way to determine Dak’s market value would be to let him hit the market. That may happen by March. And it could be that someone else may decide to take a chance on a player who may not be 100 percent but who is worth assuming the risk that it may take some time, because his on-field skills and his off-field value more than justifies it.”

Barnwell weighed in on the importance of avoiding speculation over whether or not Prescott made the right decision during last season’s negotiations.

“In the aftermath of the injury, the worst people on Twitter were excited to talk about how Prescott was foolish to decline the team’s long-term offers before he suffered his injury. Never mind that we haven’t seen any of the contract offer specifics or how much money he realistically would have been passing up as part of a deal. Every player has to deal with risk, and as often as a player passes on a long-term option and then gets hurt, we see players who take below-market value deals before staying healthy and regretting their choices, as with Chris Harris Jr. and Adam Thielen.”

The spotlight too that dominated the week were the ongoing schedule disruptions due to COVID cases across multiple teams. After just five weeks of play, we’ve seen games being postponed, weeks with two games being played on Monday nights, and even the league’s only second Tuesday night matchup in 70 years. Sports media voices weighed in on how the NFL is handling the unprecedented extent of scheduling gymnastics and what it means for teams around the league.

Belson discussed how the NFL’s scheduling challenges are impacting broadcast contracts, competitive equity, and the fate of the season as a whole.

“This imperative, where no game is guaranteed to take place until kickoff, turned the Bills-Titans matchup into not just must-see TV, but an instance of must-play scheduling. Health and competitive concerns need to be considered against a precariously balanced NFL. calendar.”

Belson goes on to explain that the unprecedented nature of schedule disruptions is creating frustration and uncertainty in NFL locker rooms.

“Teams welcome extra days to practice and recuperate, but most years, those days are scheduled, not thrust on teams at the last minute. Indeed, the Bills had been in a holding pattern while the N.F.L. assessed the outbreak in Nashville, frustrating players and coaches — creatures of routine in the best of times — wary of playing on an odd day.”

Shaughnessy provided a reality check to NFL fans, pointing out just how fragile the league’s schedule will become if positive cases continue to be an issue as the season continues to progress.

“Pretty soon, maybe this week, the NFL will acknowledge that the virus is going to prevent our Sports Industrial Complex from Having It All. Some adjustments are going to have to be made. The league for the past two weeks has been tossing sand bags into the onrushing wave of COVID-19. Check out the schedule changes forced by the Patriots-Broncos postponement. It will make your skull implode.”

Shaughnessy also echoed the calls from many other concerned fans and sports media voices for the NFL to adopt a more long-term solution to the inevitable threat of COVID.

“Patchwork scheduling and bye-week maneuvering is not a sustainable model. The center will not hold. The NFL may have to hit the pause button. Maybe the coveted 16-game schedule will have to be shortened. Maybe the almighty Super Bowl should be moved back a few weeks. Every other sport has acquiesced to the virus. Time for the NFL to face reality.”

“The most frustrating aspect to all this reshuffling? The Broncos have knocked it out of the park in terms of honoring the COVID-19 protocols. Players, coaches, and staff have been painstaking in their discipline, avoiding the social temptations that might put their team, and thus, their season, at risk.

As far as New England is concerned, he adds, “The Patriots can’t say the same thing. And yet, the Broncos are the ones paying the price for whatever lapses in New England led to the virus infecting the team and their facility getting shut down three times over a 10-day span.”