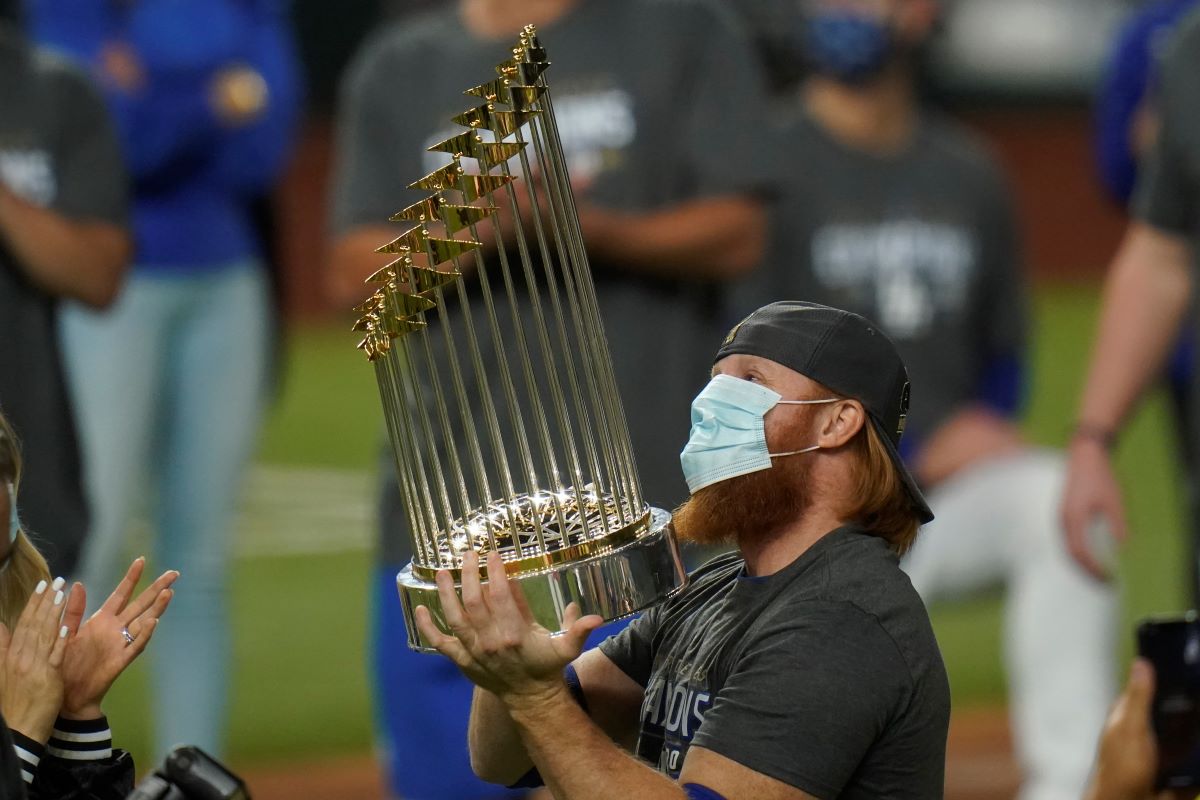 Between the final game of the World Series and the start of the delayed Big Ten football season, the week began with excitement and anticipation.

But like it has done so many this year to other sporting events in 2020, COVID-19 wreaked havoc this week on the both the gridiron and baseball diamond. Complications and challenges arose.

On Tuesday, the Dodgers won their first World Series in 32 years, beating the Tampa Bay Rays. Although MLB had set up a bubble environment in Arlington, Justin Turner of the Dodgers was pulled from game #6, after the 7th inning and was notified that he had tested positive for the virus.

The Dodgers’ third baseman was immediately quarantined in a doctor’s office, but he chose to return to the field to partake in the victory celebration. Turner also removed his mask to pose for a team photo. MLB is currently investigating the incident but Justin could be subject to hefty penalties and fines.

As for the Big Ten, all eyes were on Wisconsin’s redshirt freshman quarterback, Graham Mertz, who broke the school record for completion percentages in a collegiate start. The Badgers trounced Illinois, 45-7. Mertz nailed 20 of 21 passes for 248 yards and five touchdowns. He got to start after senior Jack Coan suffered a foot injury in practice. Shortly after the game, rumors circulated that Mertz had tested positive for COVID-19. Things slowly got worse. There were 11 other positive results, including third string quarterback Chase Wolf and head coach Paul Chryst. (This Saturday’s Wisconsin-Nebraska game has since been cancelled.)

(Comments below on the Trevor Lawrence development)

Sports media members shared their takes on these issues by tweet:

J.P. opened a Twitter conversation regarding Justin Turner’s presence on the field, and especially in team photos. While some followers felt Turner wasn’t to blame and that MLB should’ve caught it with the virus protocols in the bubble, J.P. pointed out that Turner possibly endangered the postgame crowd including MLB personnel, reporters, broadcast crews, and other people who were not in the bubble with his actions.

J.P. summarized the facts into his this statement about the topic:

“Of course, unless you were paying very close attention (I couldn’t) it’s impossible to say whether he put any of those people at risk. Even then we don’t know if it was a false positive. The broader point is that there are safeguards in place that Turner ignored in case it wasn’t a false positive. Turner ignored those safeguards. I understand why he did. It’s also OK to be bothered that he did.”

Although opinions varied on Justin Turner’s actions, J.P. reminds his followers of what this season meant for MLB fans:

“Got two texts from Dodger fans today. One (fan) went to Game #6 with his daughter. The other was making plans to see a game with his father and his 5-year-old in 2021. They were both happy. A reminder that, for everything it didn’t do for everyone, baseball still did its thing for some.”

Don was actively tweeting when the Dodgers pulled out the World Series win. He snapped a comment about the speech that Dodgers’ owner Mark Walter gave, as the worst he’s ever heard.

As the night went on, news of Justin Turner’s positive COVID-19 test began filling Twitter timelines. Don questioned whether the Dodgers will now need to quarantine, and what would have happened if a Game #7 was required. He also remarked on the fact that receiving COVID results mid-game seems less than ideal.

He also questioned how Justin Turner ended up on the field in the team picture after being removed from the game to isolate immediately. Jeff Passan (@JeffPassan) of ESPN replied: “The answer is he went back out and nobody stopped him. He was asked to isolate and didn’t.”

“The ball is in Rob Manfred’s court. The Astros’ players also ’emphatically refused to comply’ with MLB’s rules. And we know how that turned out.”

Smith was in agreement with Don regarding Walter’s speech. Although Stephen A. didn’t comment much on Game #6 itself, he wasn’t going to let the Dodger owner get away without adding his opinion.

“What in God’s name is wrong with this owner of the @Dodgers? Who writes and reads a long-ass speech like that on the championship stage, stealing that time away from the players and managers and baseball people, like that? Who does that? Come on!”

On Tuesday, Rittenberg confirmed that Wisconsin’s QB Graham Mertz tested positive for COVID-19. Because of Big Ten protocols, Mertz will be out a minimum of 21 days, putting him ready to return for Wisconsin’s game versus Michigan on November 14th. Adam updated his followers on the reasoning behind these protocols, which is to “rule out heart issues and give players time to catch up conditioning wise to prevent injury.”

Wednesday morning, Adam tweeted out the cancellation of the Nebraska-Wisconsin game, along with the fact that Wisconsin would be pausing team activities for seven days. At this time, a total of 12 people in the program tested positive, including six athletes and six staff members.

Adam blames the Big Ten’s lack of desire to start the season. He feels that they have no flexibility at this point, and games cannot be rescheduled. The ESPNer also informed followers of Wisconsin’s improbable chance at winning the Big Ten West Division. “Teams need six games to qualify, unless average for all teams falls below six games.”

Nebraska also tried to schedule a game against Tennessee-Chattanooga in place of the Badger opponent, but the Big Ten did not approve. (Yahoo ran an article questioning whether Nebraska is a good fit for the Big Ten.)

“For those wondering if #Wisconsin should have to forfeit #Nebraska game, I’m told #B1G athletic directors voted unanimously that if a school determines it cannot play because of team positivity rates, game will be declared a no contest.”

While Rittenberg provided his followers with the facts, Rodger presented his own opinions on the Big Ten situation.

“Nebraska got saved from a near-certain loss because players on the other team got infected with a virus during a pandemic, and somehow feels that it’s being persecuted.”

He also commented on a news story showing hospitals in Wisconsin near capacity with the caption: “They’ve never cared whether the rest of us die.”

Pat Forde brings some context to the Badgers shutdown, noting that Wisconsin reported 5,262 new cases and 64 deaths on Tuesday. These are the highest one-day numbers Wisconsin has seen.

He also shared some information with his followers regarding the Big Ten’s 21-day policy. Cardiologists are not recommending screenings post-COVID for athletes because of lack of heart issues found. Further:

Late in the week, it was announced that Trevor Lawrence the star-studded Clemson quarterback tested positive for Covid-19. He is out for the Boston College game tomorrow.

The big question though is whether he’ll play against Notre Dame a week from Saturday, November 7th.

SI said that even high ranking Clemson officials weren’t initially completely sure themselves. A couple more responses on the Trevor Lawrence development:

After the news, Matt Fortuna questioned what will happen come November 7th when Clemson is set to play Notre Dame.

“If everything goes smoothly between now and then, could Lawrence fly separately to Notre Dame on the day of the game?”

Andrea also jumped into the conversation:

“Plus … Trevor Lawrence has been under the microscope since taking college football by storm as a true freshman in 2018. Now, after his positive COVID-19 test, he will face continued and heightened scrutiny, fair or not.”