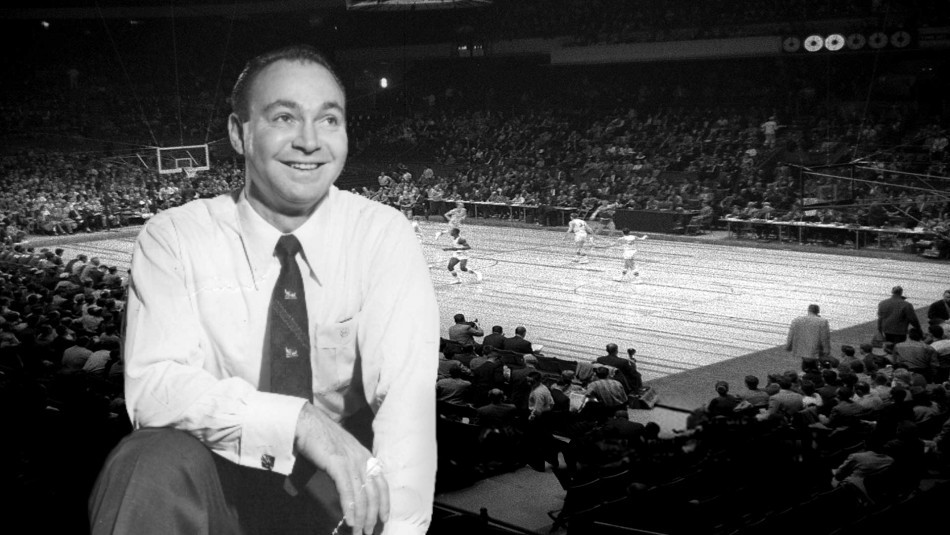 (Editor’s Intro: In his early 20s in the 1970s, Barry Kipnis was a precocious broadcaster, calling college basketball games on New York radio . After graduating from Hunter College, Barry pursued a career in finance.

Still a student of play-by-play sports today, Kip knows what it takes to call games. Here, he talks about his one unforgettable lesson with Marty Glickman, a tutor of so many broadcast greats: from Marv Albert to Bob Costas nationally and from Len Berman to so many other New York mainstays . )

Aside from his electrifying and memorable play-by-calls, the legendary broadcaster, Marty Glickman, was also renowned for tutoring and training professional sportscasters and athletes turned sportscasters. It was in that context that I had the wonderful opportunity to learn tips from the master who gave up some of his precious time to meet with me, someone he hardly knew.

In 1973, having broadcast college basketball in NYC to a singular extent, I was assigned to call the radio play-by-play of the Morgan State-Grambling football game at the old Yankee Stadium. I believe it was christened the Whitney M. Young Memorial game.  One minor problem:  I never announced a football game of any kind, including touch tackle on the streets of Brooklyn, and had no road map of how to do so.  Enter the master.  Through the editor of this publication, it was arranged for me to meet with Marty at the WOR Radio studios to talk about how to do football play-by-play.

First thing he showed me was how to set up an upright depth chart, placing thumbtacks next to each player who was in the game.  His “spotter” would stand behind him and the charts. Then, Marty demonstrated how he used a legal pad to write the quarter and score at the top of the page and then the down, yards to go and the line of scrimmage – in a column one under the other. He drew a line on the pad after each first down.  Marty told me that he had learned this technique from his mentor, CBS radio icon Ted Husing.  Doing so, made it unnecessary to look up at the scoreboard at all; Marty was confident he knew the game better and could react faster than the scoreboard operator.  Plus, he referred to his pad to enrich the play-by-play by rapidly telling the listener the number of plays in the drive and where the drive started.

Marty knew it was unlikely or impossible to memorize every number of every player so he advised me to remember only the names and numbers of the players who handle the ball – QB, RB, receivers.  If you have a good spotter that person would point out the tackler, blocker etc. and reach over and move the thumbtacks when there was a substitution.

Do you know the quickest way to figure out the distance of a downed punt, even if the punter is kicking from his own territory to the opponents?  It was easy for Marty (and so obvious) – as he advised me, just add together the yard line it was kicked from and the yard line it was downed (or fair caught) and subtract from 100.  No scoreboard necessary.
​
My first ever football broadcast went very well indeed, thanks in large part to the invaluable expertise of the great Marty Glickman.  After the game, I took my cassette tape back to Marty for him to critique my “performance” but that’s a story for another day.

​Oh, and one fun fact about the game, over in the booth next to mine was none other than John Sterling (Yankees’ radio announcer), who called Morgan State games at the time and he was nice enough to hand me a page of some statistics and facts about the Bears.

Barry is a Senior VP at Amalgamated Bank In New York and a lifelong sports aficionado.