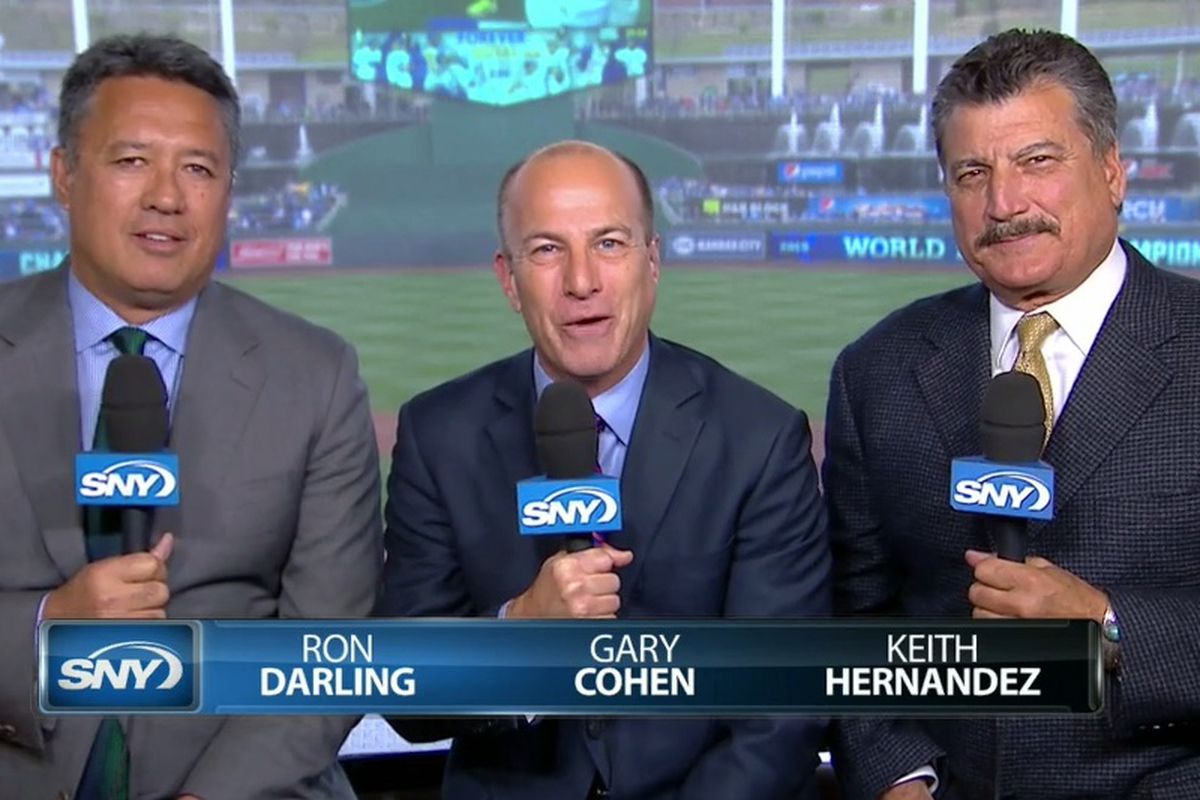 Ron Darling, Gary Cohen and Keith Hernandez are in their 16th together as the popular voices of the Mets on TV.

Before Gary Cohen stamped his signature home run call, “It’s outta here,” there was a steep hill he had to climb. Few start at the top. And still fewer start their careers in America’s largest market, New York.

A New York boy by birth, Gary cut his teeth in minor league towns like Spartanburg for the Spinners, Durham for the Bulls and Pawtucket for the Red Sox. On the way up, he did basketball and hockey too, for among other teams, the Providence College Friars.

Before Gary’s “It’s outa here,” there was Bob Murphy’s, “We’ll be back with the happy recap!” Just shy of his 31st birthday, Cohen started his career under Murphy in what the original Mets announcer called, “My office,” Shea Stadium’s Mets’ radio booth. That was back in 1989, when the beloved Murphy chain smoked game after game, and the booth was a model for second hand smoke. But Murphy exhaled the team colors and he was a fan favorite.

In 2004, shortly before Murphy’s death, Gary (left) was appointed the team’s lead radio announcer and was partnered with Howie Rose. By 2006, Cohen moved to SNY and has been the club’s television voice since. The crew that first year on SNY is still intact, Cohen, 63, Keith Hernandez, 67 and Ron Darling, 60.

The chemistry these telecasters have formed strikes a comfortable balance of baseball knowledge and lighthearted conversation. The way they keep even the slowest games entertaining is what fans appreciate. Gary is admired by many for nonchalantly bringing out the best in the two former Mets. Together they produce depth and exude warmth and have become the soundtrack of Mets’ summers. They are free-flowing and engage one another in unforced conversation. Most importantly, they understand all things Mets.

New York baseball fans have taken a shine to the TVers just as the team’s early fans loved the three originals, Lindsey Nelson, Ralph Kiner and Murphy. Those three worked comfortably for the first 17 seasons of the Mets existence.

If you can appreciate the fact that Cohen never gropes for the right word, it shouldn’t surprise you. He was a Dean’s list student at Columbia University.

Gary talks about his path to where he is now and elaborates further in our Q&A.

What initially inspired you to get into broadcasting?

I was a huge sports fan growing up, and my dream was to be a shortstop for the Mets, or a power forward for the Knicks. But I stopped growing before I got to 6’ 9”, and I lacked any talent, so I had to set my sights elsewhere.

I got an AM radio in my room when I was nine years old, and loved listening to any games I could find.  It never occurred to me that broadcasting was something I could actually do, but I got a chance in college, and never really stopped.

Who were your most role models and mentors throughout your career?

Like most broadcasters who grew up in New York in my generation, Marv Albert was my North Star.  I wanted nothing more than to be the next Marv.  But I also listened to countless others, including Bob Murphy, Lindsey Nelson and Ralph Kiner doing the Mets, Merle Harmon on the Jets, Al Albert doing the Nets, and many others.  I think they all rubbed off on me in ways I’m not even aware.

My most important mentor was a guy named Gary Sparber, whom I worked with at WORD in Spartanburg, South Carolina.  Gary was a terrific sportscaster in his own right – for a time he was the voice of the Charlotte Hornets – until he had some vocal trouble and had to leave the business.

Gary knew I had some ability, but always stressed to me, even years after I got the job with the Mets, that I needed to be less of a broadcaster and more of a human being on the air.  He always stressed warmth, and being yourself, and of course, he was spot on.

Please explain the differences in preparing for a broadcast of baseball and basketball.

No two sports could be more different in both preparation and execution.

Baseball preparation is an every day, lifelong experience.  With such long games and so little action, and a sport that changes every day, you never know what you might use in a broadcast. It might be something that happened yesterday, or last week, last month, or something I saw when I was six. So, during the baseball season, the preparation is constant.

I don’t like it at all, but it’s a short-term necessity we all have to deal with. You just miss so much, and especially in baseball, since it’s not a linear game, when the ball is in play, I’m in constant fear of getting the call wrong.

While it’s nice to sleep in my own bed every night, I very much look forward to being in-person for road games as soon as possible.

What are the different challenges of doing television versus radio?

I grew up as a radio guy, and I still consider myself a radio guy doing TV.

Mostly it’s just learning how to edit myself (and dress better). It’s also a different dynamic with your partners.  On radio, I always worked with another play-by-play guy, so we were basically doing our own analysis.  On TV, I’ve got partners who are paid to be the experts, and a big part of the job is giving them the room they need to shine.

In your experience of doing both television and radio, which one do you personally prefer?

I enjoy the control and anonymity of radio.  I enjoy the teamwork and paycheck of TV.

Which is your favorite sport to broadcast?

Although I have become far more associated with baseball, I believe my skills are more compatible with the action sports, like basketball and hockey.  If I could call a college basketball game on the radio 365 days a year, I would sign up for that.

What is it about the chemistry with Keith Hernandez and Ron Darling that makes the broadcasts so popular?

Chemistry is a hard concept to get your arms around. I have such great admiration for Ron and Keith, having interacted with them as players, and now watched their growth as broadcast professionals.

I think our starting point was important. When we began on SNY in 2006, we were all novices, more or less.  I had done 17 years of Mets radio, but had little TV experience.  Ronnie had done one year in Washington, but without much direction.  And Keith had dabbled, but had never done a full schedule of games.

That mutual lack of experience led us to lean on each other from the start. As it became apparent that we were all bringing something valuable to the table, with tremendous assistance from our producer Gregg Picker, who is brilliant, and has been with us from the start, and Bill Webb, the greatest director in baseball TV history, our broadcasts started to take shape.

The most unusual aspect of our booth is the complete lack of egos.  No one needs to be the star, everyone is pushing for the best possible broadcast, and we have a wonderful time together every night.

What is your favorite memory or experience in your broadcast career for the Mets?

The entire 1999 season was special for me. I arrived with the Mets in 1989, after the greatest five-year stretch in franchise history. The team then proceeded to miss the postseason my first ten years.

So ’99 was my first taste of postseason, and that team was so much fun to watch, culminating in winning a one-game playoff after trailing by two games going into the final weekend. Then Todd Pratt’s series-winning home run against the Diamondbacks, and Robin Ventura’s Grand Slam single against the Braves in the NLCS.  That whole season was just a blast.

Are there any particular changes you think baseball should make to speed up the game?

I would like to see a pitch clock. It has been used effectively in the minor leagues, and its time (no pun intended) has come.

If you hadn’t been a broadcaster what do you think you would be doing?

That’s a great question, since I have had no other job since college. I suppose I would have gone to law school, but I can’t imagine it would have been nearly as fun.

What advice would you give to a young broadcaster?

If you truly believe you would like to be a play-by-play announcer, my advice is to practice. Go to a game, any game, high school, college, minor league, whatever. Get rosters and stats, talk to whomever you can to prepare, and then sit down and talk into a microphone. When you’re done, listen to what you’ve done.  Take notes about what you like, and what you don’t.  And then do it again. And again. And again. Keep listening, keep improving.  And when you can actually stand listening to yourself without cringing, let a professional listen.  Pay attention to constructive criticism, and then start from the beginning again.

If you don’t feel you can devote this kind of dedication to the craft, I would heartily suggest finding another way to make a living. Because there will be hundreds of young men and women putting in that same work, and this is a really tough business.

Thanks for this interview. I first heard him when he made his Mets debut as #2 to Murph in 1989, on Opening Day, and I still remember the interview in which he talked about how he felt prepared because he’d done games for Columbia (including a kickoff where the ball landed behind the kicker) and then the Durham Bulls, of whom he said the movie only got 1/4 of the insanity. He’s a marvelous broadcaster. A minor quibble with something he said. Bill Webb may well have been the greatest director of baseball telecasts–I won’t argue about that–but Harry Coyle… Read more »

The author is obviously too young to remember that although Lindsey Nelson and Ralph Kiner were very much liked by Mets fans in the early years of the team, Bob Murphy was not. He was an ‘outsider’ to begin with, not at all well known like Nelson, a national TV fixture and Kiner, the Baseball Hall of Famer. What was worse is that Murphy had a remarkable propensity to jinx the Mets – he’d mention that an opponent was a long ball threat the pitch before the opponent hit it out of the park, but if he mentioned a Met… Read more »