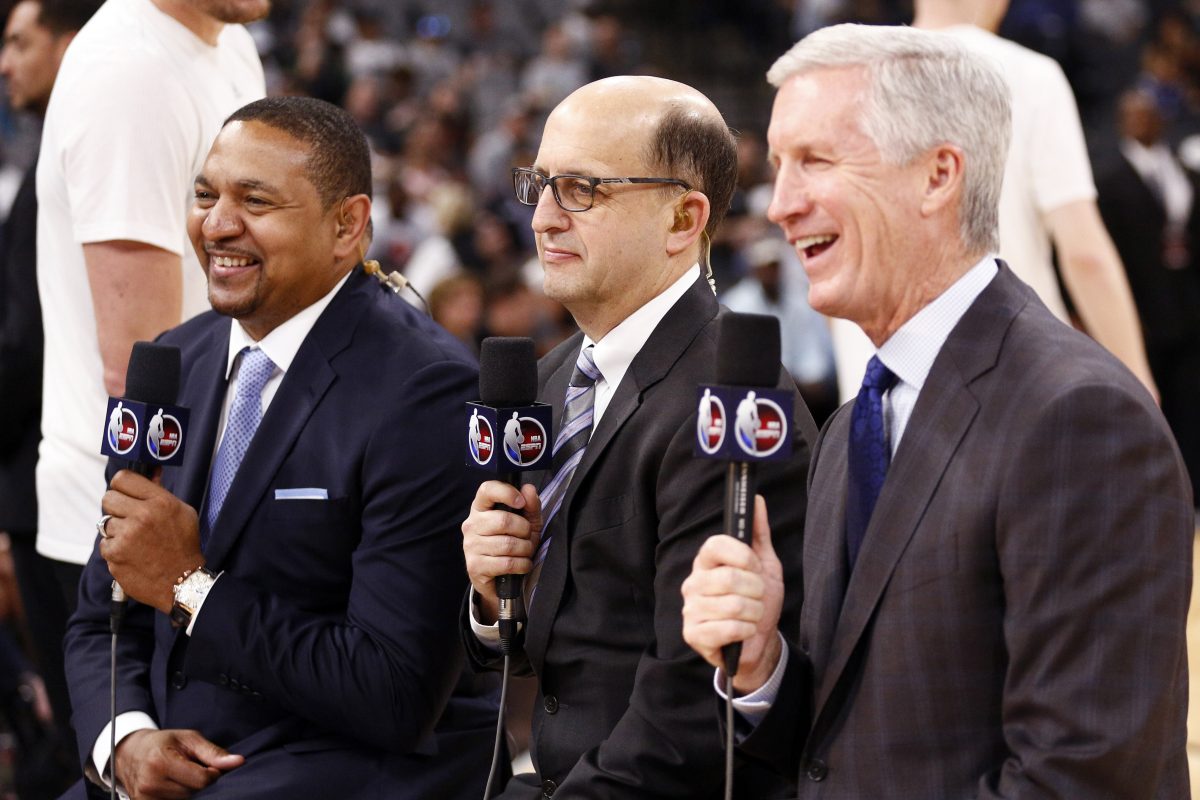 Mike Breen finally made it. What took the Hall so long?

The Naismith Hall of Fame announced on Friday that the three-decade NBA voice was selected as the broadcast winner of the 2020 Curt Gowdy Media Award.

The recognition by the Hall is emblematic of broadcast excellence. Twelve of the last 14 Gowdy broadcast winners did the body of their work covering the NBA. Only two, Jay Bilas and Woody Durham, are known for their college broadcasts. The Naismith Hall of Fame enshrines both pro and college basketball greats.

Breen holds the record for calling the most NBA Finals in league history, 14. He did his first in 2006, succeeding Al Michaels who did two on ABC. Marv Albert and Dick Stockton each did nine. Brent Musburger did six. Albert and Stockton are Gowdy Award winners. Musburger hasn’t won, at least not yet.

Since 1992, Breen has been a Knicks’ broadcaster, first on radio, succeeding Jim Karvellas. In 2004, Mike moved to television permanently when Marv Albert’s contract wasn’t renewed by Madison Square Garden Network.

Broadcast styles change. Fashion and acceptance aren’t always uniform.The norm years ago is not necessarily convention today. Depending upon your taste, the winds of change can be misguidedly curt or verbose or refreshingly uplifting.

In recent years for example, Fox’ Joe Buck introduced a millennial version of minimalism. By contrast, Doc Emrick brought a granular radio call to his NBC-NHL pulpit. A few baseball play-by-play announcers are downright terse, a drastic shift in measure from the days of Bob Costas, Joe Garagiola, Curt Gowdy, Jon Miller and Vin Suclly who filled broadcasts with storytelling.

ESPN’s Mike Breen, 58, is chattier than his basketball predecessors albeit he doesn’t miss a reportorial beat. Mike has two men with him to whom he invariably defers, Jeff Van Gundy and Mark Jackson. The telecasts are one happy interconnected presentation.

The transition from Albert to Breen, who’s now the country’s top NBA voice, produced profound balance among the trio. When Marv began on television, the role of color commentators was more supplemental. Viewers and analysts didn’t have the luxury of replays, animation, graphics and rules experts. In fact, in Albert’s early days, scores weren’t consistently posted on the screen. Play-by-play announcers had to employ traditional radio elements in their calls. Analyst didn’t have telestrators to instruct, educate, break down plays and pontificate.

So it’s a whole new world. The intersection of the technological explosion, second screens and changing viewing habits, have shifted the weight of broadcasts to the commentator. For play-by-play announcers, less is more.

Mike has embraced these requirements, turning ESPN’s NBA broadcasts into a joint three hour tale. He’s conversational, not scripted. He’s engaged but not dominant. The broadcasts are less about independent voices; play-by-play and commentator. They’re about the whole, an intermingling of pooled roles.

Mike’s a great student of basketball and its history. He has more strategic insight than any network play-by-play voice who’s preceded him. He delivers the goods with passion and substance. In the thirty plus years I’ve known Breen, I’ve never heard him disparage anyone, nor have I heard anyone say anything derogatory about him.

Breen is not the first to wait for a representative Hall to reach out. Al Michaels was the primetime voice of the NFL for 26 seasons before he got the Pro Football hall of Fame’s Pete Rozelle Award. As for Breen, he was preceded inexplicably at the Hall by Doris Burke a couple years ago.

Mike Wilbon, the longtime columnist for the Washington Post, won the 2020 Gowdy Award for writing.  Interestingly, Wilbon is best known as a broadcaster, serving as the co-host of ESPN’s nationally acclaimed Pardon the Interruption. His partner of course is Tony Kornheiser who himself wrote for several newspapers and covered lots of NBA stories. Kornheiser hasn’t been selected a Gowdy winner to this point. In fairness, Wilbon has been around the NBA more frequently.

The Gowdy Awards are a doubleheader sweep for ESPN. Both Breen and Wilbon are employed by the Bristolites. The two media winners will be recognized during player induction weekend in late August in Springfield.

While Breen has done some football and covered Olympic events for NBC, he’s stuck to only basketball for some twenty years. Mike’s particularly well versed on league rules, having thought about refereeing at some point in his early life.

It’s been quite an emotional stretch for the Long Island based Breen. Ex-NBA Commissioner David Stern who at times served Mike as an unofficial counselor of sorts passed last month and radio legend Don Imus died in late December. Breen was Imus’ sports anchor for years on WFAN Radio in New York. Imus for that matter helped put Breen on the media map.

After these past difficult events, Breen gets the email of his life from John Doleva, the president of Naismith Hall that he’s in.

Vin Scully reached out to Mike to congratulate him on Saturday. Like Vin, Mike is an alum of Fordham. “To hear Vin Scully’s voice on the other end when you answer your home phone is not something anyone ever expects. That VOICE, even on the phone. My head was spinning. So kind, so gracious,” Breen told me.