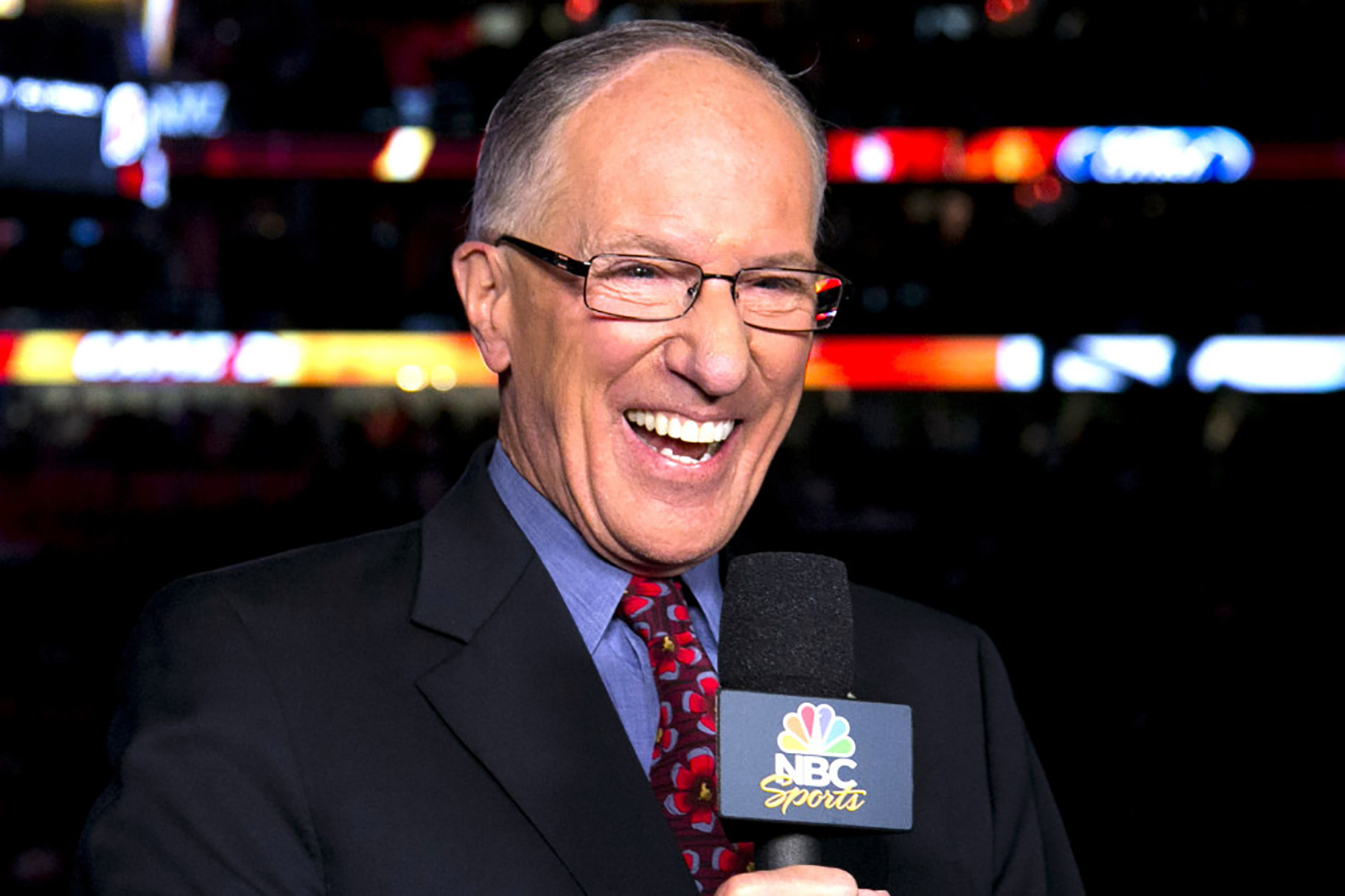 Mike “Doc” Emrick, 74, announced his retirement today. He's been broadcasting hockey for almost fifty years and NHL games since 1980. Emrick has covered countless Stanley Cups for a mix of networks including most recently NBC. (courtesy of NBC) Sports)

The who’s who of the NHL and NBC heaped praise on Mike Emrick today, after he announced his retirement as the national voice of hockey.

Emrick, a Hall of Fame broadcaster, spent 47 years calling games, beginning at Bowling Green State University, later the minor leagues, before growing his prominence as the lead NHL voice. His first year in the NHL was in 1980 with the Philadelphia Flyers.

Now, as his glistening career ends, Emrick can be dubbed Voice Emeritus of the NHL. He spent the last 15 years as the lead play-by-play voice for NBC Sports’ NHL coverage.

Talk about a man in demand, Emrick covered the NHL for ABC, ESPN and Fox. He also did some work for CBS as a college basketball announcer.

Emrick’s career started during the 1970-71 NHL season, when he covered the Pittsburgh Penguins as a freelance reporter for the Beaver County Times. He is affectionately known as ‘Doc’ because he received his Ph.D. in broadcast communications from Bowling Green in 1976.

He covered the Philadelphia Flyers, New Jersey Devils and New York Rangers. Lou Lamoriello, the brilliantly successful NHL executive never allowed broadcasters who worked for the teams he managed to miss games so that they can undertake other assignments. The one exception was Emrick. That’s how highly he thought of Doc. Lamoriello ran the Devils many of the twenty years that Emrick called New Jersey games.

Some of the comments on the media call:

Addressing Mike: “You have been simply magnificent at your craft, you have been a magnificent representative of hockey for the last 50 years, particularly the NHL. There’s nobody who does a play-by-play as well as you do, and I just want to thank you for all of the incredible energy and effort you’ve given us and our fans, in particular the insights you give them to the game.”

Addressing Mike: “I love you, and I just wanted to make sure you knew how important and impactful your career has been on a lot of people. I’m sure there are a lot of fans out there that feel the same way that we all do today.”

Addressing Mike: “What amazes me about you — there’s so many things, Doc, the fact that you’ve done a bunch of triple- and quadruple-overtime games and you sounded as great in the fourth hour as you have at the opening face-off. It’s tremendous, the energy you have, the enthusiasm, and of course your love for the game shows through every time you’re on the air.”

Lou reminisced about the day 48 years ago when as hockey coach of Providence, he took his team to Bowling Green where he was interviewed by Emrick. The Isles’ GM told Mike on the call: “I’ve had the honor and pleasure of going way back with you where we both started. I remember being interviewed by you in 1972 in Bowling Green, and then you calling one of the most penalized games between Providence and Bowling Green if my memory serves me right.”

The NHL’s Mike Emrick: A Rapid-Fire Version of Dick Enberg

Is hockey better on Canadian TV or American? Are 2 voices better than 3? How about graphics? We explore!

What a loss to hockey, but I’m glad he’s going out on his own terms. And I wonder if he has thought, beyond what he said, about going out while he’s still on top. Vin told someone as he was about to retire that it had gotten harder for him to do what he was doing–by which, I suspect, he meant the preparation and concentration. It has to be even tougher in hockey. I recall that Marty Glickman talked about how, as he got older, he learned to use fewer words in his descriptions to make up for any loss… Read more »