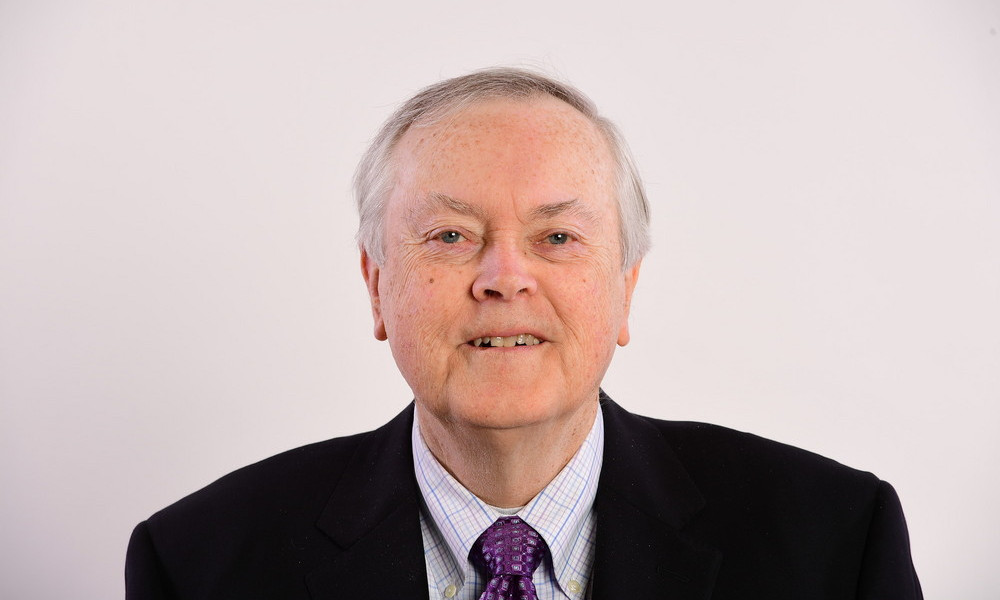 Mike Patrick, whose name was almost interchangeable with ESPN for some 36 years, has left the network. Mike’s first ESPN assignment was in 1982.

The West Virginia native never put himself ahead of the hundreds of events he covered. His diction was right out of the royal palace. His words rolled off his tongue mellifluously; every syllable, enunciated perfectly. His preparation was thorough. Behind the play-by-play microphone, he paused with perfect inflection to best underscore an event’s most dramatic occurrences. For someone who did the biggest of events, he was rarely if ever the subject of criticism of either the media or fans.

During ESPN’s formative decade of the 1980s, you can say that Dick Vitale and Mike Patrick helped build the network’s attraction through college basketball, its lead play-by-play programming before nailing down the NFL and Major League Baseball. Vitale was the game’s cheerleader and Patrick the broadcast’s steady pro who economized his verbal vibrancy, giving Vitale the on-air runway he needed to do his popular shtick.

Patrick was out of the Curt Gowdy, Jim Simpson and Keith Jackson school and era. Give him an assignment and he’ll sparkle. For years, he was the face of the women’s Final Four, the men’s ACC championship, the biggest of college football games and the College World Series. He did all of them with ease and alacrity.

Of course, he’ll likely be best remembered for Sunday Night Football which ESPN hosted on its flagship platform for 19 years. In our dialogue, Mike talks about the two-man booth with Joe Theismann and how the addition of Paul Maguire enhanced the telecasts. Interestingly though, Patrick details why he would prefer to best be remembered for his years calling ACC basketball.

For a broadcaster who rarely opined on-air, Patrick pulled no punches in our Q&A. He is deeply concerned about the college basketball scandal that’s still unfolding as March Madness approaches and he is  against moving play-by-play teams from game venues to the studio.

I’d imagine that growing up in West Virginia within the listening range of Pittsburgh radio, you heard lots of Bob Prince on baseball and Joe Tucker on Steelers. Did they influence your style? If not, who did?

Listened to Bob Prince a lot, but I wasn’t much of a Pirates’ fan. My uncle had a tryout with the St. Louis Cardinals when he got out of the navy following WWII, and told me about it. So I was a Cardinals fan when I was four…I still am. So I would hold my radio at a 45 degree angle near my bedroom window and be able to hear most of the games on KMOX Radio. Harry Caray and Jack Buck did the games then and were just wonderful. But the best I ever heard was Jack Fleming who called West Virginia basketball and football during the golden age in the 50s and early 60s with players like Hot Rod Hundley, Jerry West and Rod Thorn. All-American guards for 9 seasons in a row, it was glorious. I guess the way I approached games was a reflection of their enthusiasm and love of what they did.

Tracing your roots further, one of the early stops in your career was Jacksonville where among other things you called Jacksonville University Dolphins basketball. Did you cover the great Artis Gilmore?

When I moved to Jacksonville to work at the Post-Newsweek station there as a reporter/anchor I covered Artis and the Dolphins.

I did several games on TV for my station, but didn’t have the chance to do radio until the year after Artis, and had an absolute ball being a homer for 3 years.

At ESPN, your play-by-play plate brimmed. You did NFL, college football and basketball, the women’s Final Four and the College World Series! Yet fans likely remember you best for calling the Sunday night NFL games because of the league’s luster and the fact that you did it all 19 years ESPN had it. How do you want to be best remembered as a play-by-play announcer and for which sport?

Probably like to be remembered most for ACC basketball, because I did it for 34-35 years for various entities and had the honor of calling 30 conference tournament championship games. So many great players and coaches during that span and before expansion, at least every single game had an impact nationally. At any given time 6 or 7 ACC teams would be in the top 20; the coaches, Dean Smith, Lefty Driesell, Coach K, Booby Cremins, Jimmy Valvano, Terry Holland all competing against each other, never been anything like it, never will again. If I’m remembered for anything I hope it would be for the love and enthusiasm I tried to bring to each broadcast and for trying to help fans enjoy it as much as possible.

You worked with two interesting personalities on NFL broadcasts, Joe Theismann and Paul Maguire. In fact, for a chunk of the time, both of them were with you in a three-man booth. Joe was occasionally criticized for talking too much and Maguire had a dry wit . What was it like having them flank you and do you prefer one color commentator or two?

Doing games with Joe and Paul was so much fun for me because I was so close to both of them. The bonus of having your friends as broadcast partners is not something everyone has been able to enjoy. It made it possible for me to say anything to each of them, be it critical, complimentary or funny, and I was comfortable doing all of those. Always thought Joe was unfairly labeled as talking too much, he had things to say that both of us thought were relevant to the game and were important. Joe and I did the games together for 10 years and when our boss said he wanted to add Paul, neither one of us was crazy about the idea. We thought we were doing just fine by ourselves and neither of us even knew Paul. But after the first half of the first game it was obvious that he made us better and was so much fun to work with on top of it. The only criticism I had after that was why didn’t you do it sooner.

Upon times during the past few years, ESPN has had its announcers call basketball games from the studio. How do you feel about it and could you ever call a game while in fact not being at the game’s venue?

I did one game from a studio and was appalled at the idea that saving a few bucks on travel expenses was worth sacrificing the standards for a telecast that we had established over the years. Anyone who says the quality doesn’t suffer should be selling used cars but there will be more and more of them anyway because of money.

College basketball is being rocked by a disheartening scandal. Do you think it will reduce viewer interest in the game?

I’m afraid the lack of honesty and integrity that is being uncovered is bad enough and widespread enough to have the result you suggest. If coaches and players cheat that much during recruiting what would make us think they would stop there. Integrity can’t be turned on and off like a light switch. If a player and his family take $100,000 under the table before they sign, how much would they need to fix a game after they sign? It’s not stepping on a slippery slope, it’s stepping off a cliff.

Because virtually all games are on some form of video, television, cable or a webcast, announcers sound alike. It’s tough to distinguish one from the next. Any suggestion for budding play-by-play announcers on how to sparkle?

Just be a fan of the game and enjoy the ride. That should separate you from the guys who have been up all night trying to think of a snappy line to jam in.

As you wind down and you look back, what assignment would you like to have had but weren’t given the opportunity?

No regrets about roads not traveled. We didn’t have the rights to certain premiere events so I never worried about it. No future in that.

Are you putting away the microphone forever or do you still have a desire to work? Will you be back doing Cleveland Browns’ pre-season telecasts?

Don’t know what waits over the next hill. Already had a couple of feelers but I’ve never wanted a real job and still don’t. As far as the Browns we haven’t talked yet.

What will you miss most about ESPN?​

I’ll miss the people who cared as much as I did, and there were a bunch of them. On air and behind the scenes, it didn’t matter who got the credit. If WE did a great job on the game everyone took pride in it; pride in each other. We set high standards for each other and we did everything we could to live up to them. I had the chance to work with people who were among the best in every aspect of this business, and I’ll miss that so much