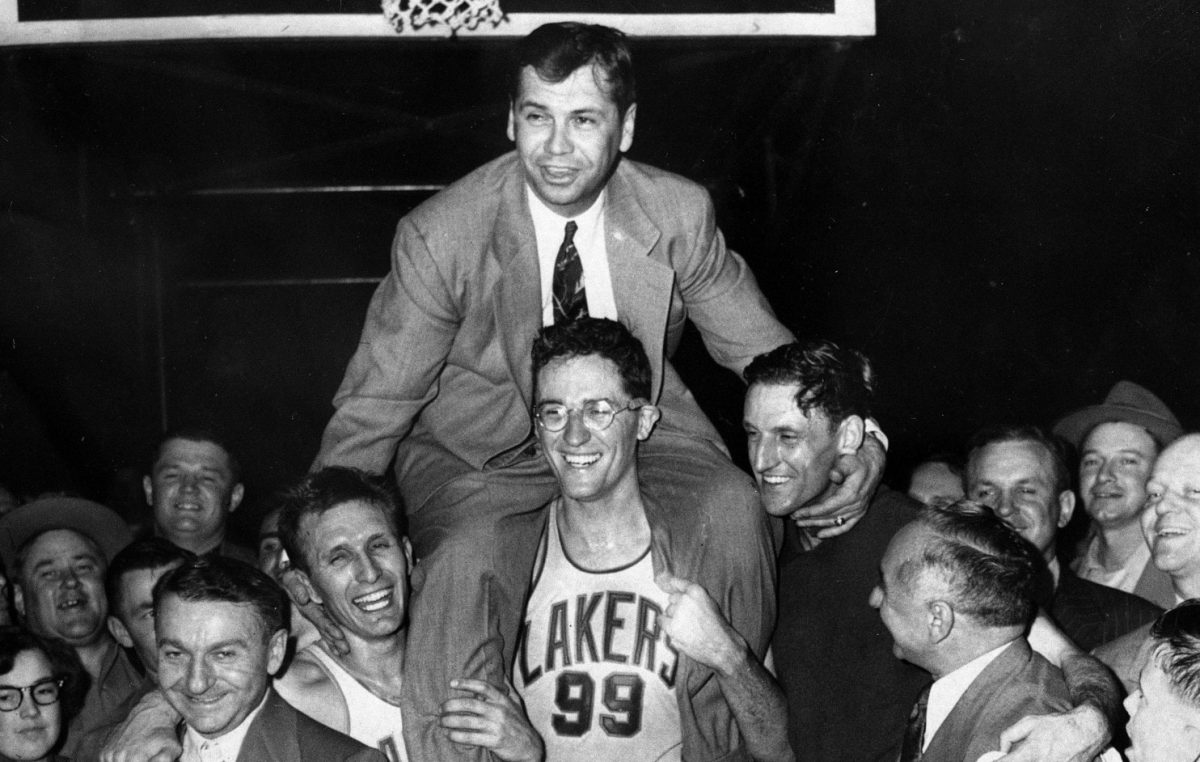 The NBA was hardly a major league in the 1950s. Yet basketball was Minneapolis' first ticket into the pros. The Lakers won five NBA titles there before moving to L.A. Coach John Kundla celebrates on the shoulders of the league's first great big man, George Mikan.

All roads lead to the city’s media icon. Sid Hartman, 100 years young , is still a commentator on local radio and a columnist for the Star Tribune.

A native Minnesotan, Hartman has seen it all, covered it all and told it all, from the depression through the war and the 75 explosive years since. Mention a name or a game and he’ll regale you with a story or three. In a press room, the legend held court. He’s never in short supply of anecdotes.

In 1997, Hartman penned his colorful autobiography, aptly titled Sid and written in collaboration with his longtime colleague, friend, scribe and radio personality, Patrick Reusse. In confined and complicated times like now we all need an escape. So I picked up Sid and indeed, Hartman had something to say for most anyone in sports who’s crossed through the Twin-Cities.

The late NBA commissioner David Stern called him, “an ardent chronicler of his home state.”

Like other sports cities, the decades are dotted and cobbled with joy and agony. There were the old Minneapolis Lakers who won five NBA titles in the 1950s when the league couldn’t get arrested. There were heartbreaks too. The Vikings advanced to four Super Bowls in the 70s and won none.

Minnesota is not a bad place to age. Hartman is the second known sports centenarian. There was John Kundla who coached those old Lakers and lived to 101. I guess winning five NBA titles is a better antidote for aging than Geritol. There’s retired Vikings’ coach Bud Grant who’s 93 and Al Shaver, the first voice of the Minnesota North Stars who’s 92.

Hartman talks about the days when he was in charge of operating the Minneapolis Lakers, when franchises survived on a shoestring budget, days when you were able to fit the front office into a coat closet.

It was mid-season 1955-56 and the Celts’ Red Auerbach wanted Minneapolis’ scorer and rebounder Vern Mikkelsen. Hartman agreed verbally to the deal. At the time, the Lakers’ dominance of the NBA had weakened significantly. Unloading Mikkelsen would have pretty much guaranteed Minny a last place finish in the then eight team NBA. It would also have given the Lakers the first round pick in the draft and a fellow named Bill Russell.

But the Lakers’ radio announcer Dick Enroth convinced team owner Ben Berger that Minneapolis fans loved Vern and that he shouldn’t make the deal. So Hartman was told by Berger to forget it. Enroth was closely identifiable with the Lakers in those years. He did the home games live and recreated most of the road games. Yes, recreated basketball games. 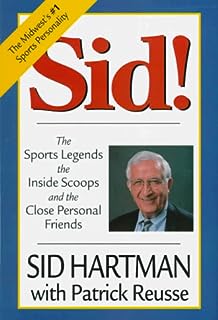 Looking back, Hartman says, “The NBA was gone from Minneapolis and didn’t return for 29 years. I’ve always blamed Dick Enroth for that.”

The city has had some wonderful broadcasters. For decades, Hall of Famer Herb Carneal, was the the Voice of the Twins. Ray Scott, albeit known for football, did the Twins on both television and radio. Reusse said Scott was a solid baseball announcer.

Then, there was Ray Christensen, a Twin-Cities legend, best known for voicing the University of Minnesota football and basketball broadcasts. Christensen was old school before there were classrooms. A missed shot was never ‘no good.’ Ray was proper, ‘not good.’

Ray was also a penny pincher, Reusse says. “If he was given hotel per-diem for his overnight trips, he’d stay at the YMCA and save a buck or three.”

Kevin Harlan was the original radio voice of the T-Wolves. He’d fly in from his Kansas City home for each game and use his galvanizing timbre and warm call to seed interest in the new franchise.

In recent years, Paul Allen, not to be confused with the late Microsoft mogul, calls Vikings games with an acerbic spin and a derisive wit. Hardly rhythmic in a classical play-by-play sense, his salty style is a must listen in the Twin-Cities.

Minnesota is big into pro and amateur hockey. When the NHL doubled in size from six to twelve in 1967, Al Shaver crossed the Canadian border to become the North Stars radio voice. When the club left for Dallas in 1993, he stayed put and gave up the puck. But Al fostered a wave of family followers. His son Wally does Gophers hockey and grandson, Jason, is a hockey broadcaster for the Chicago Wolves. Grandpa Al is a Foster Hewitt winner.

The most colorful of characters in Minnesota sportscasting history might be the late Halsey Hall. Brad Nessler, CBS Television’s SEC voice, grew up in Minneapolis and told me that when he was young his uncle called him Little Halsey. Apparently Brad had sportscasting on his mind early and his family knew it.

Hartman says that as feisty as they were, Billy Martin was the greatest baseball manager Minneapolis ever had and Bill Musselman the best basketball coach. Sid pegs Herb Brooks as the greatest hockey coach. “They would rather get fired than take advice – even if the advice makes perfect sense,” he recalls.

Musselman was irrepressible. “Defeat is worse than death because you have to live with defeat,” he preached. His coaching legacy will always be sullied by what was likely the Gophers darkest moment. In 1972, they got into one of the ugliest college brawls ever, toward the end of a home game against Ohio State.

While the team’s Ron Behagen wasn’t the only combatant, his name usually comes up first. As Sports Illustrated put it then, “Behagen rushed from his seat on the bench to where (Ohio State’s Luke) Witte was lying helpless and viciously stomped the Ohio State player’s neck and face.” SI dubbed the story -“An Ugly Affair in Minneapolis”

Back to Halsey Hall, Hartman says that when the Twins went on the road, “Halsey would take one suit, two shirts, some underwear and a suitcase full of booze. A young reporter once asked him why he took his own booze with him when it was readily available in the cities they were visiting. Halsey said, ‘Son, you never know when you’re going to run into a local election.”

Hartman also reminisces about the day he picked up Howard Cosell who came into town for a B’nai Brith dinner. Howard insisted that they stop at a bar before the affair. After a couple of shots of bourbon there, Howard had two more during the cocktail hour and four more before he was called up to speak. According to Sid, Cosell had eight shots of the stuff and delivered one of the most heartwarming speeches he ever heard.

Halsey Hall was calling a Twins game one day when he saw a young couple making out in the grandstands. Halsey describe it for his radio audience. ”He’s kissing her on strikes, and she’s kissing him on the balls.” His partners, Carneal and Scott were hysterical and had to leave the booth.

This week, Hartman told his Star-Tribune readers about the 1967 riot in his hometown. “Those riots, like the ones taking place around the death of George Floyd, led to the National Guard deploying more than 600 troops to the area where I had grown up.”

From 1945-48, Minneapolis had a mayor named Hubert Humphrey who later became a Senator and then Vice President. On March 31, 1968, his boss, President Lyndon B. Johnson stunned the country. “I shall not seek, and I will not accept, the nomination of my party for another term as your president.”

In 1968, the world turned upside down, much like now. Days after LBJ’s announcement reverberated with no warning, Dr. Martin Luther King, Jr. was assassinated and the nation suffered through terrible unrest, likely the worst  since the Civil War. A couple months later, Democratic presidential hopeful Senator Robert F. Kennedy, Jr. was gunned down after winning the California primary.

That summer, 52 years aho, America was scourged by a dreadful summer of rioting in places like Louisville and Akron. In late August, the Democrats held their quadrennial convention in Chicago, a city ruled in those years by the iron-fisted Richard J. Daley. The area outside the International Amphitheatre turned into a battleground between Vietnam War protesters, bystanders, students and police. Daley was accused of having the Chicago police use Gestapo like tactics to quell the demonstrators.

Meanwhile, inside the Amphitheatre, Minnesota’s native son, Hubert Humphrey was selected the presidential nominee. In a year of out-of-control violence, Republican opponent Richard Nixon, who had risen from the politically dead, pushed his platform of  “Law and Order.”

Nixon beat the erstwhile Minneapolis mayor in a close race for the White House.

Sports are always a wonderful diversion.