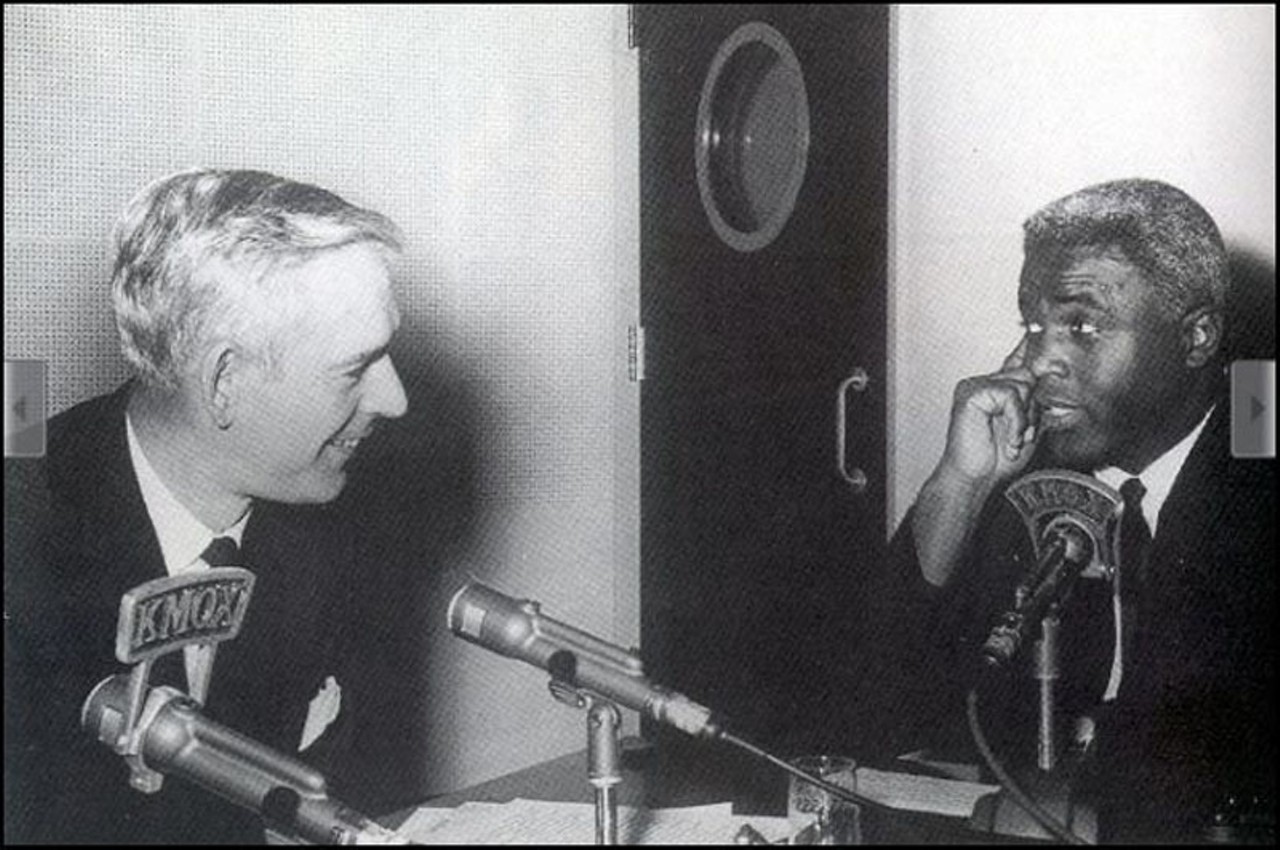 Jack Buck was a storyteller. He spun yarns, engrossed listeners and could tell war stories, but not just any. Jack won a Purple Heart during WWII’s final battles to defeat Germany.

Buck was one of Tom Brokaw’s Greatest Generation. He was born in Massachusetts in 1924 and moved as a teen to Cleveland. His father died at 49 and the family had to be fed. There was no golden spoon.

On-air, Buck captured the enormity of unparalleled moments with lyrical and vocal perfection. He expressed what he felt and never sounded forced or scripted. Ozzie Smith, “Go crazy” and Kirk Gibson, “I don’t believe what I just saw” are two at the top of the Buck chart.

In my many trips into St. Louis through the years, I’d hear tales from cab drivers about how they’d take Jack here or there and that he would drop them a $100 bill for a tip. That was when $100 was more than cabbies made all day.

This Monday at 7pm ET, MLB Network runs a one hour special on Buck as part of its baseball voices series. It will be co-hosted by Bob Costas, a Frick winner, a baseball historian and a commanding studio host and by Tom Verducci the prolific and brilliant SI writer and Fox analyst. The show will highlight Buck’s energetic soundtrack of historical calls featuring Kirk Gibson, Lou Brock, Bob Gibson, Ozzie Smith, Stan Musial and others. The program will also re-air on Monday at 11:30pm ET. Two weeks ago, the first in MLBN’s voices series featured Vin Scully.

Known of course for play-by-play, Jack Buck was comfortable doing just about anything, from hosting talk shows to shaping a prodigy. In the 70s, Costas was fresh out of Syracuse University when he reported to Buck at KMOX Radio. Costas told me that by the time he arrived in town, Jack was already an icon. Buck wasn’t afraid to give Costas the proverbial kick in the behind, like the time time Bob flew down to Memphis at the last minute to do an ABA basketball game.

Buck, the husky voice we heard nationally on the NFL and MLB got a AAA baseball job in Rochester, New York with the Red Wings. Ed Edwards, the man he succeeded, told a dirty joke at a banquet and was fired by the team’s general manager, Bing Devine. In Rochester, Buck also did NBA games of the Rochester Royals (now the Sacramento Kings).

Recreating a Red Wings baseball game from Montreal one day, Jack relied on a French speaking Western Union operator who couldn’t communicate clearly. Until they sorted things out, Buck bought time cleverly. He fabricated a tale about a batter who fouled a pitch off his finger and needed medical attention. Jack’s tale was cogent. The hitter’s wife, listening to Jack’s recreation, called her husband later concerned for his ailing finger!

Jack got the Cards job in 1954, the same year he hoped to join Curt Gowdy in the Red Sox booth, but lost out to Bob Murphy. For years thereafter, Jack would occasionally rib Murph, “You little SOB, you beat me out for the Red Sox job.” The two overlapped in the Big Leagues for five decades.

For 18 consecutive World Series, beginning in 1979, Buck and Scully dominated the national radio coverage of the Classic on CBS. Scully did 11 and Buck 7. The two were good friends. Scully told me last year that Buck was one of his golf buddies. Jack was bestowed with the coveted HOF Frick Award in 1987.

Scully and Buck were quite different. Vin could be flowery, Jack meat and potatoes. Scully was Shakespeare, Buck, Hemingway. Scully lives in glitzy Southern California, Buck resided in the hardy Midwest. Scully’s leisurely moments were often spent on the links, Buck could take an adventurous skydive. Vin was always prim and proper in the booth, and on a cruelly sweltering day, Buck could broadcast with his feet in a bucket of ice. Scully would be publicly neutral and Buck would introduce presidential candidate Bob Dole at an election rally.

Buck did tons of football, basketball and even hockey during the St. Louis Blues’ first year in the NHL in 1967-68.

Jack worked for some 15 seasons behind Harry Caray who was beloved in St. Louis and throughout the team’s large network contour. I’m sure there were some uneasy moments between the two. Buck touches on a few in his autobiography, Jack Buck: That’s a Winner.

In 1965, for instance, NBC chose Buck who did network football to do the baseball All-Star Game in Minneapolis. Caray bristled inside. And to make matters worse, Buck was teamed on the game with Joe Garagiola who was affiliated with NBC. Garagiola was part of the Cards’ broadcast team from the mid 50s through the early 60s and he and Caray, according to Red Barber, were bitter adversaries in the booth.

Then again Barber and Joe didn’t like one another either when they spent a couple seasons in the Bronx in the mid 60s. But that’s a whole other story.

Buck was a prankster of sorts too. He tells a story in his book about the day in Vero

Beach when the Cardinals played the Dodgers there. Howard Cosell happened to be at the ballpark. Jack knew the egos involved so he told Cosell and Caray separately that one was talking nastily about the other. Buck then went up to the press box and as he said in his text, “I waited for the two of them to navigate toward each other. In about a minute they were going at it like a dog and a cat. They loved it and so did I.”

For Jack Buck, 1969 turned into an epochal year. In April, his son Joe was born and in October, Harry Caray was fired by the Cards. The separation shocked the baseball broadcast world and was caused by a reported relationship that Harry had with the wife of August Busch III, the son of team owner Gussie Busch.

When Caray was fired and Buck was elevated to number one, Jack told the press, “I always wanted to be number one but not at the expense of Harry or anyone else.”

Meanwhile, son Joe Buck, is quite a character himself. I guarantee that Joe’s autobiography Lucky Bastard will have you in stitches. It was a NY Times’ sports best seller. One caveat though. It’s laced with profanity. Yet the stories are invariably entertaining and he paints a touching picture of his relationship with Jack.

When Jack passed in 2002, the flags at St. Louis’ City Hall and the St. Louis County Government Center were lowered to half staff and a public visitation was held in the stadium where mourners filed past his coffin.

They don’t come like Jack Buck anymore. Like a Scully, Hearn, Caray and a Prince, Buck was larger than life.

In a world dictated by PC, the booth has turned sterile.

Jack Buck was a master. He was entertaining and deeply human. Rest in peace, Jack!

What a great show about a great broadcaster, and I think it’s interesting that if you listen to current broadcasters, only Scully outranks Buck as an influence. Not just Joe, but Thom Brennaman and DeWayne Staats certainly picked up some of Buck’s cadence. I always thought Skip Caray reflected Buck’s style and influence more than his father. A note about Garagiola. There was a publication starting in the 1970s called The Baseball Bulletin where Curt Smith first appeared with articles about broadcasting. I don’t recall whether he wrote this one, but I know I have it somewhere. There was an… Read more »