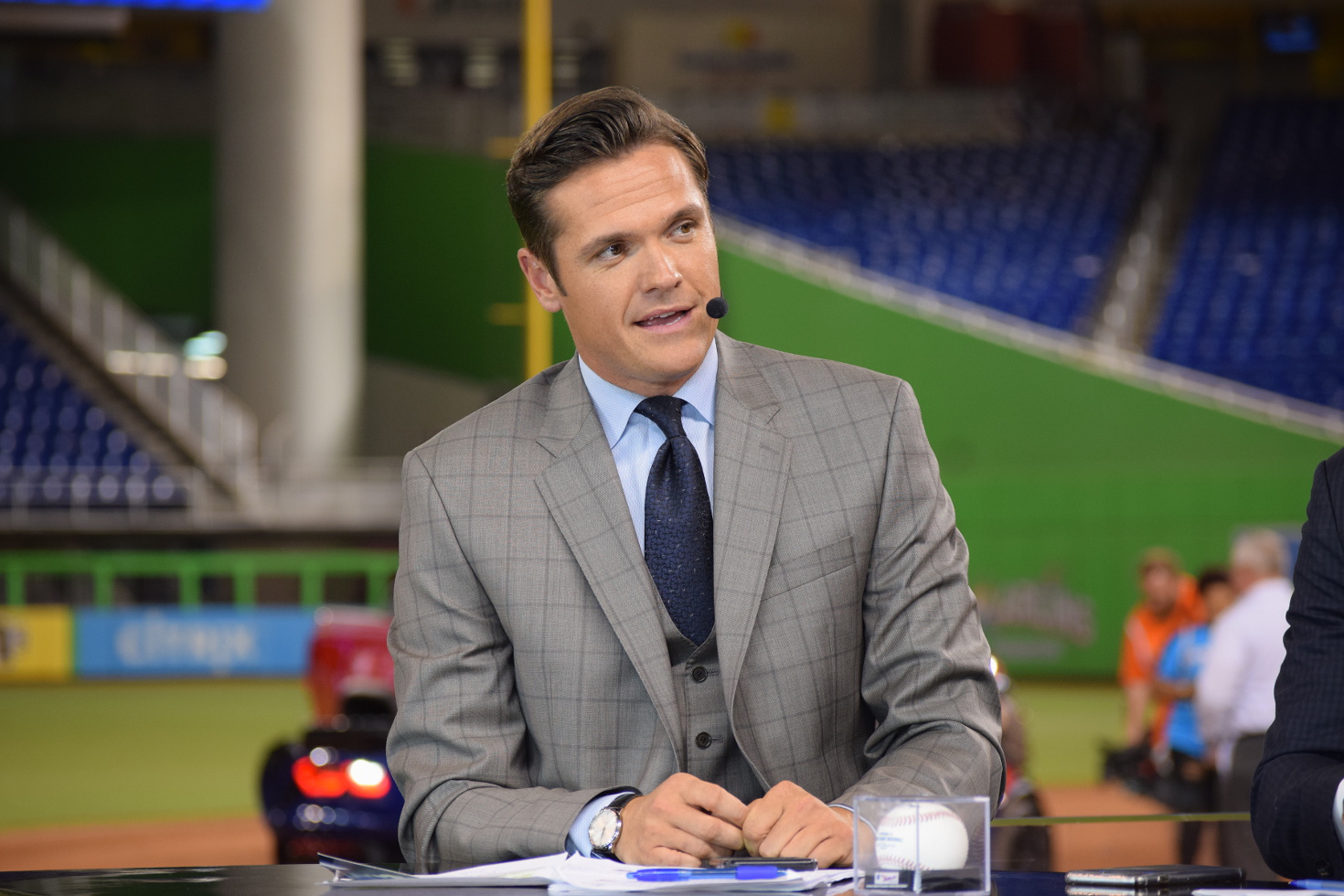 Jonathan Schwartz, the longtime radio host of many musical standard shows, is a big baseball fan. He’s not big on football.

So for many years,  every Super Bowl Sunday morning, Schwartz played radio highlights of historic baseball moments. It was a bold tribute to baseball on football’s most sanctified day and appointment listening for fans of the summertime sport.

This Super Bowl week, I’m delighted to share a question and answer session with Greg Amsinger, a talented and visible host of MLB Tonight ​and other popular programming on MLB Network.  The Missouri native’s passion for the game is as infectious in the dead of winter as it is in mid-summer.

In today’s commoditized world of sports announcing, the unsung Amsinger sets himself apart from other on-air colleagues across cable’s unending number of channels.

Genuine warmth and friendliness are impossible to manufacture and Greg brings a natural and enthusiastic smile to the camera; one that makes viewers feel better about themselves and one that encourages his cohorts on the  set to open up and have more fun.

Funny, how things start. Amsinger had little career aspirations or direction until his high school theater teacher  in St. Charles, Missouri recognized his attribute to perform. He encouraged Greg to study theater which Amsinger  now says was a game-changer.

You’ve been with MLB Network since 2009, the year it launched. You’ve worked with a stable of greats, from Pedro Martinez to John Smoltz and from Bob Costas to Peter Gammons. What have you picked up from them?

They’re STARS. But they want to be treated like the rest of us. I caught on to that early on. Therefore, I’ve conducted myself on television without stars in my eyes.

No one will accuse you of having a staid or somber look on camera. Your smile exudes warmth and a sense of delight to talk baseball. Does this on-air ease come naturally or an is it an attempt to distinguish yourself from the pack?

I’m one of seven kids from humble beginnings in St. Louis. I never thought it was possible to have a career like broadcasting baseball. So, I will always smile while I’m on MLB Network, because I love the game AND I know hosting one day on MLB Network is a bucket list dream for so many.

When MLB Network launched in 2009, we were dead set on creating a uniformed “voice” that was different from the pack. We talked to EACH OTHER, not the camera, and along the way developed a chemistry and friendship that carries on to the air. What I’ve learned in 17 years of professional broadcasting is this: if you want something that is “stream worthy” or something that’s “viral,” make anything that “hits home” and you’ll be fine. It’s totally true.

You went to Lindenwood College, a D II school outside St. Louis. What broadcast opportunities did you have in school?

It was Lindenwood College during my freshman year, but after that it’s been called Lindenwood UNIVERSITY, which was an important evolution at the time. I don’t know why, but it meant something to all of us. As I look back, the college radio station sold me on broadcasting. It was 89.1, KCLC FM, “The Connection.” We played new adult contemporary music with a splash of sports. I did it all. From morning shows to play by play, I loved the radio station. My sophomore year I started a sports TV show that continues to this day. That school means the world to me.

You’ve done play-by-play for the Big Ten Network, including college basketball. What’s it like to leave the studio and preside over games?

The Big Ten Network opportunity wouldn’t be possible without MLB Network being so wonderfully flexible. I love hoops. I played it growing up and covered it during my time at CBS Sports Network. Getting back to doing play by play is such a welcomed challenge. I love it and I hope BTN, that’s been so great to work with, has room for me for years to come.

Do you aspire to do baseball play-by-play?

I DO aspire to do baseball play by play. When I’m too old to look at on MLB Tonight, I intend on doing play by play for an MLB team. I think covering one team for a season sounds like so much fun. At the moment, I have a job that is perfectly wired to my personality. I love discussing ALL the games and plan on hosting this show for a very long time.

Radio was part of you early career. You produced Cardinals’ broadcasts on their large network of stations, anchored by formidable KMOX. You likely interacted with Mike Shannon and perhaps Joe Buck who did some radio then too. What did you pick up?

During my time at KMOX, I was influenced by two people. One was the late Jack Buck, a Hall of Fame broadcaster who was my idol growing up, and a current St. Louis radio broadcaster, Randy Karraker.  Both men said things that mattered every time they spoke, and they made people behind the scenes feel like they were important. I aspire to do both every day.

From a Missouri setting to the national stage. Pretty good! What counseling would you give aspiring announcers today, those in college and those who have just embarked upon their careers?